How Many Neon Tetras Can Fit in a 10-Gallon Tank? 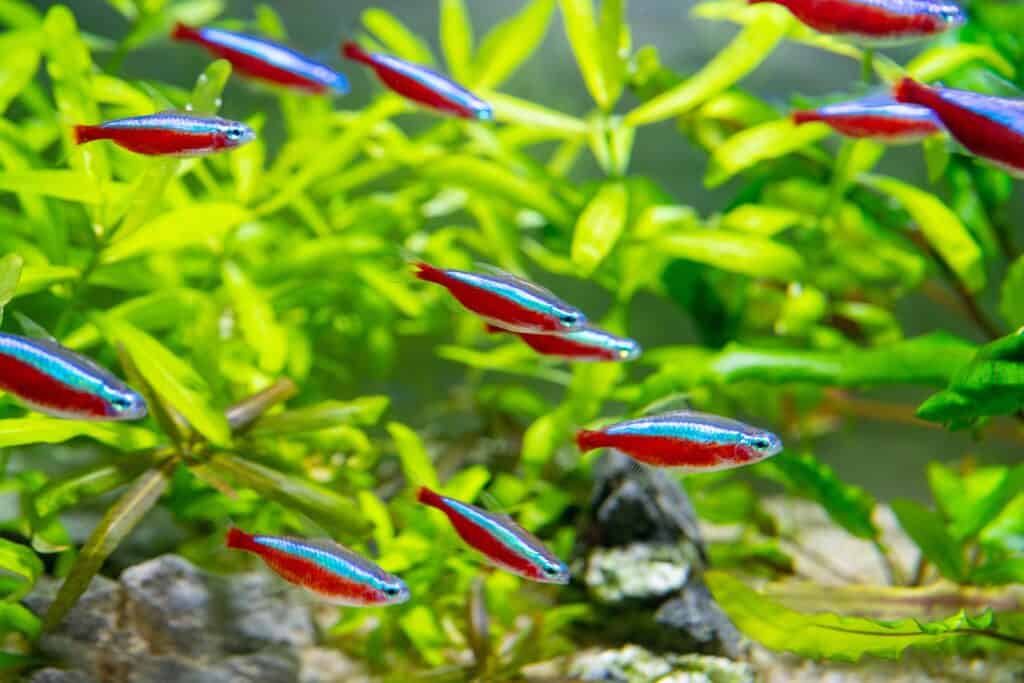 The neon tetra is some of the most striking and popular tropical freshwater aquarium fish. As a general rule, you can keep 6 or 7 of them in a 10-gallon fish tank.

Keeping any more than this is known as ‘overcrowding’ and is full of potential problems.

But it should also be noted that neon tetra is schooling fish and prefer to be kept in larger numbers in bigger tanks.

Let’s find out why.

Neon Tetra (Paracheirodon innesi) should be known well enough by most people interested in fish keeping. Their bright colors and easygoing nature have made them one of the most popular pet fish for freshwater tropical fish tanks.

Each month almost 2 million of them are imported to the United States from South America and South East Asia, where they are caught from the wild or captive-bred for the aquarium trade.

But how do we determine how many of these tiny fish can you safely fit into a 10-gallon aquarium?

The Rule of Thumb for Stocking an Aquarium

Traditionally, aquarists have followed a simple formula to determine the number of small fish they can keep in a certain-sized tank. It goes like this: fish that are no longer than 3-inches long requires one gallon of water per inch of body length.

The number of individual fish in your tank setup will depend on the tank size. These beautiful fish require a tank setup that mimics their natural habitat. With great care, they’re adorable fish for beginner fish keepers!

An alternative method is to calculate the number of fish according to the surface area of the aquarium. Some argue this makes more sense since it is the tank’s surface area rather than the tank’s total volume that is the most important consideration for stocking density.

The surface area method goes like this: Stock one inch of fish for every 12 square inches of aquarium surface water.

Calculating the Number of Neon Tetra for a 10-Gallon Tank

Using the surface area method, we find that a typical 10-gallon tank has a surface area of 128 square inches and is suitable for 10.6 inches of fish length. Once again, this results in 6-7 neon tetra.

Therefore, any more than 6 or 7 neon tetra in a 10-gallon tank would be defined as overcrowding.

The Dangers of Overcrowding

While some people might like the look of a tank crammed full of fish living on top of one another, it also has some significant drawbacks. First, it limits fish’s swimming capabilities and personal space.

Tanks that are overstocked can get dangerously low in oxygen and high in ammonia or nitrates. They can also suffer blooms of algae and water that quickly become cloudy.

The tank environment should have clean water, resemble the natural environment, have light substrates, and optimal temperature to enhance the fish’s quality of life.

To combat this, the fish keeper must constantly chase their tail to keep water parameters viable for healthy fish and plant growth. Always have the fish’s health in mind!

Fish stocked too densely will also become stressed and more prone to disease. One of the arts of fish farming is learning to estimate the fish size and clean the fish tanks.

Unwanted wastes and high ammonia levels may result in the death of the fish.

If you don’t want to constantly change your water, clean your filters, scrub algae, and look after sick fish, you should stick to the ground rules for stocking your fish tank.

Can You Keep Other Fish With Neon Tetra in a 10-Gallon Tank?

If you have a nano aquarium but want to keep other species of fish with your neon tetra, there are a few options that people have tried, but it’ll mean your numbers of neon tetra will get dangerously low. Let’s take some common examples…

Guppies are another popular fish for nano tanks. They are slightly larger than neon tetra, sometimes exceeding 2 inches in length.

Using our basic formula, you could keep 2 guppies with 3 neon tetra in a 10-gallon tank.

Betta fish or Siamese Fighting Fish is another common choice for a 10-gallon tank and can be kept successfully with neon tetra. But for a 10-gallon you could only squeeze in a maximum of 3 neon tetra alongside your betta fish.

If you think this sounds like too few neon tetras to be kept together, you’d be right.

Neon Tetras Need To Be Kept in a Groups

Neon tetras are schooling fish; they need each other’s company to feel safe and secure.

They form schools ranging from a dozen to several hundred fish in the wild, swimming around in the Amazon basin. Now imagine that for a sight!

Because of their natural inclination to merge into large groups, neon tetra should never be kept in groups smaller than 6 individuals, with larger numbers being preferable for their well-being.

So Is a 10-Gallon Tank Big Enough for Neon Tetra?

As we’ve said, 10 gallons of water is large enough for 6 or 7 neon tetra, but it may be more fun for you and your fish to keep larger numbers in a bigger tank.

When kept in a small group in a 10-gallon tank, neon tetra will tend to ‘hover’ in one place rather than actively scour the aquarium like they would in a larger tank. Hovering can make them rather dull to look at, and it also doesn’t let the fish live up to their full potential.

To exhibit active schooling behavior, neon tetra fish must be kept in groups of 10 or more in a tank with plenty of free-swimming space. A 20-gallon tank is a minimum size for them to do this, and it also opens up the possibility of giving them some tank mates.

If you’ve followed our formula, you’ll understand that a 5-gallon tank would only be big enough for 3 neon tetra. Since the smallest number they should ever be kept in is a group of 6, we would never recommend you keep neon tetra in a 5-gallon tank. A 10-gallon tank is a very minimum, and even that is rather small.

Some Better Choices of Fish for 10-Gallon Tanks

Another popular fish for nano tanks is the more solitary Siamese Fighting Fish (Betta splendens) which could be kept with a couple of shrimps or snails in a 10-gallon tank.

If you’re still really keen on keeping something like neon tetras for your 10-gallon tank, consider their cousins, the Green Neon Tetra (Paracheirodon simulans), which only grow to just over an inch long.

Conclusion: A 20-Gallon Tank Is Much Better for Neon Tetra

Although you can keep neon tetra in a 10-gallon nano tank, their numbers will be limited to just 6 or 7 fish which is less than ideal.

On top of this, 10 gallons won’t give them enough space to swim freely, so they’re unlikely to show off their schooling behavior, which makes them so attractive.

A 20-gallon tank is a much better size for neon tetra to be at their best, and it’ll also give you the chance to add other species of fish and plenty of live plants.