How Many Angelfish in a 75-Gallon Tank – Our Guide 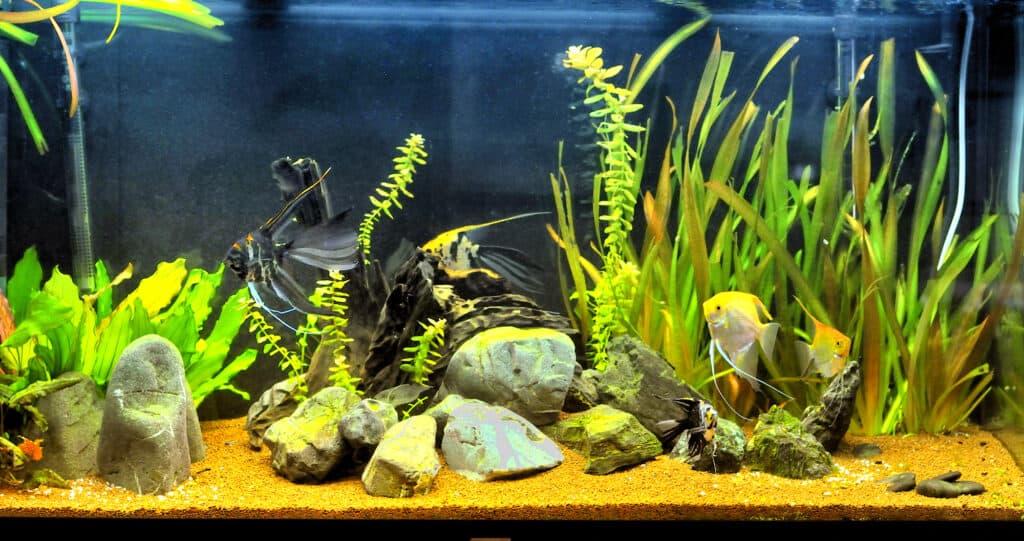 Angelfish are deservedly some of the most popular and iconic tropical aquarium fish. Their elegant appearance and fascinating behavior have made them a hit with aquarium owners for the last hundred years.

But how many Angelfish can you fit in a 75-gallon tank? The answer is 6, but if you want to keep other fish with them, they’ll need a larger tank.

How did we arrive at this figure, and is it possible to keep more or fewer Angelfish in a 75-gallon tank? In this article, I’ll explain all.

First of All, How Big Do Angelfish Get?

The first piece of information we need to know when looking at the stocking density of a type of fish is the eventual size of the species.

But adult angels are very unusual in that their bodies are taller than they are long – the slightly larger Altum angelfishes are only 7 inches long but can grow up to 12 inches tall!

For our calculations, we will use this maximum dimension of 12 inches to work out the maximum stocking density.

What Are the Dimensions of a 75-Gallon Aquarium?

With a height of 12 inches, Angelfish need a relatively tall aquarium, so a tank of much less than 21” would be inadvisable as their permanent habitat.

How To Calculate How Many Angelfish for a 75-Gallon Aquarium

To figure out how many Angelfish we can stock in a 75-gallon tank, we’ll need to use a specific formula.

Although a good rule of thumb for calculating the stocking density of smaller fish is one gallon per inch of fish, this rule doesn’t apply to medium-large fish.

If it did, you might be tempted to squeeze an 8-inch Oscar into an 8-gallon tank, or a 10-inch Clown Loach into a 10-gallon aquarium! Definitely not advisable!

Since adult Angelfish are medium-large fish, we’ll need instead to use Dick Mill’s Golden Rule of 12 square inches of aquarium floor surface area per inch of fish.

We then need to divide this number by 12 to find out how many inches of fish we can accommodate.

The final step is to find out how many 12 inch tall Angelfish we can fit into the allotted 72 inches of tank space.

It really amazes me how tidy this sum is, but the outcome for a tank that’s exactly 48” x 18” is precisely 6 Angelfish.

Why Six Is a Great Number of Angelfish

As it turns out, 6 is an ideal number of Angelfish in many ways. Here’s why.

In the wild, Angelfish are a shoaling species that like to swim together in schools.

Although people have kept them alone, they’ll probably be happiest when kept in groups where they can interact with one another.

Keeping them in groups also gives them the opportunity to find a mate.

As they mature, Angelfish will begin looking for a partner to breed with, and breeding this beautiful fish can be one of the most exciting things about keeping Angelfish.

Because they’re a cichlid, their courtship behavior is highly evolved, and their mating ritual can be a real spectacle to witness!

Because they like to pair off, it’s a good idea to have an even number of Angelfish. This offers the best chance that all of your Angelfish in the tank will find a partner, but of course, this depends on you having equal numbers of males and females!

Sexing Angelfish before they’re mature isn’t always so easy, so you may have to rely on good fortune to give you an equal number of males and females.

As they grow up, though, males will begin to grow a raised hump on their forehead, also known as an enlarged crown that’s typical in male cichlid fish. The ‘breeding tube’ that enlarges during the breeding season in male Angelfish is small and pointed in shape.

Females tend to mature a bit smaller than males but have a larger breeding tube that is round and cylindrical.

These breeding tubes and enlarged crowns only tend to become visible after 6 – 12 months, so you might have to wait until then to know how many males and females you have

Another reason that six is a great number of Angelfish is that they look amazing when swimming in groups.

In my opinion, there aren’t many freshwater aquarium setups more attractive than a school of Angelfish swimming among tall, lush plants, and pieces of driftwood, with some tetras keeping them company.

Angelfish come from the soft, acidic waters of the Amazonian river system. Swimming among dense plants and pieces of driftwood, with a substrate covered in leaf litter, is the natural habitat of these fish.

Creating a tank like this at home is not only aesthetically pleasing, but it will also help your Angelfish to feel at home.

If you want to keep other community fish with your six Angelfish, you’ll need to get a bigger tank of at least 90 gallons. Another way to do it would be to keep just four Angelfish with a few other fish in a 75-gallon tank.

To see wild Angelfish in their natural environment, check out this revealing video here.

The Dangers of Overstocking Angelfish

Angelfish are large, fairly territorial fish. They need plenty of space to move around and stake out a part of the tank as their own.

If you were to keep too many Angelfish in a tank that’s too small for them, they’d quickly become stressed and aggressive towards one another.

This is especially true of breeding pairs that need plenty of space to court and lay their eggs. Breeding pairs of Angelfish are notorious for being protective and aggressive towards any fish that come too close to their eggs!

Overcrowding fish also carries the danger of polluting the tank with excessive fish waste. If your biological filter becomes overwhelmed by waste, it might fail, causing dangerous ammonia or nitrite spikes in the aquarium.

Lastly, overstocking your aquarium causes more stress not only to your fish but potentially for you too! More fish require more feeding, more cleaning, and more partial water changes.

A more sparsely stocked tank can be a more pleasurable experience for all of you.

The Dangers of Keeping Too Few Angelfish

As I mentioned previously, Angelfish can be kept alone with other robust community tank fish but they may become lonely or bored. If you buy a pair of Angelfish, and they’re a male and female, they might pair up and breed, but that’s only in the best-case scenario.

In other cases, you might have two males or two females, who may bicker with each other, and in other cases, a single male and female may be resistant to pairing up with one another.

Years of aquarium experience have shown many fish keepers that keeping Angelfish in groups works best because it gives the best chance of having both sexes and the fish choosing their partner naturally.

A 75-gallon tank is a good size for this since it allows you to keep a substantial group of six Angelfish together.

I’ve mentioned breeding Angelfish a few times now, so it’s worth saying a little bit more about breeding them here.

Angelfish become sexually mature at around 6-9 months. They’re monogamous breeders, meaning they will only mate in pairs.

Their courtship ritual is fascinating and very cute! Before laying eggs, the male and female Angelfish will lock lips and pull each other for short distances around the tank!

Eggs are laid on a leaf or a fairly vertical surface such as slate or a piece of driftwood, and good angel parents will fan and protect their eggs from potential thieves. This includes other Angelfish, so tensions can get high at this time, and fights between fish are not uncommon.

To circumvent these potential problems, some fish keepers prefer to move the breeding pair to a 30-gallon or 40-gallon breeding tank where they can raise their young in peace and safety.

This may be preferable in a 75-gallon tank to prevent serious aggression and injuries between fish.

To find out more details on breeding Angelfish, be sure to check out our full Angelfish care guide here.

A 4-foot long, 75-gallon tank is the ideal tank size for a group of 6 Angelfish. And in many ways, 6 is a great number of Angelfish to go for, since they like to be kept in groups and to choose their own mates.

If you’re looking to keep other fish species with your Angelfish, you could either keep a few others with four Angelfish in a 75-gallon tank or get a larger tank of 90-gallon or more to mix other fish with six of them.

To find out more about the best and worst tankmates to keep with your angelfish, check out our guide on the subject here!