Gourami Bubble Nests – What Are They, and How Are They Made? 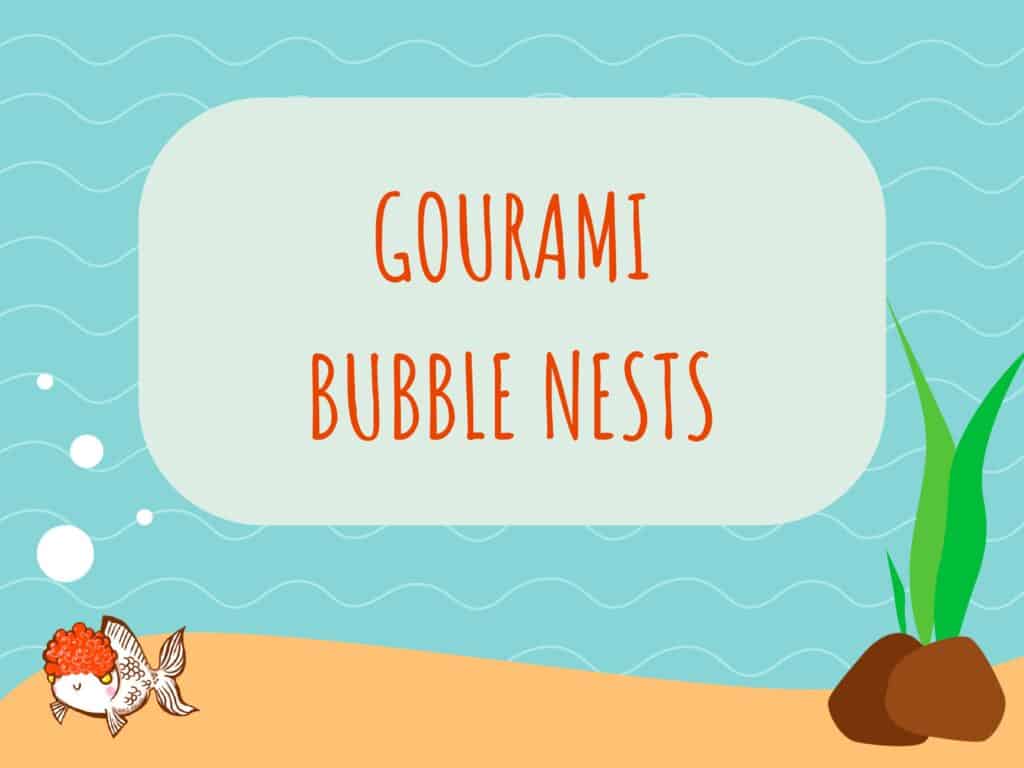 Gouramis are famous for raising their eggs and young in foamy, floating structures known as bubble nests. But how exactly do they build a bubble nest, do all Gourami species make them, and how should you raise the young Gouramis when they emerge?

Stick with me and I’ll answer all of your questions about Gourami bubble nests!

Firstly, What Is a Bubble Nest?

A bubble nest, also known as a ‘foam nest’ is a mass of floating bubbles made by some species of fish to protect and incubate their eggs and young offspring.

These remarkable structures are constructed out of air bubbles, saliva, sticky oral secretions, and sometimes aquatic plants too.

Bubble nests are normally made by fish living in low-oxygen environments as a way to protect their eggs and young near the water’s surface where oxygen levels are higher.

Do All Gouramis Build Bubble Nests?

When it comes to tropical fish, it’s not always possible to generalize. Gouramis are a large and diverse family of fish native to Asian countries from India and China to the Philippines and Indonesia.

While Gouramis are famous for building bubble nests, not all members of the family adopt this method of breeding.

Some species such as the Kissing Gourami save themselves the trouble of building a foam nest and instead scatter their eggs in oil globules that float to the surface.

Chocolate Gouramis and Frail Gouramis present another variation. These stunning fish are mouth brooders, meaning that after spawning, the male collects the fertilized eggs in his mouth and incubates them until they are ready to hatch!

It’s true, though, that a large portion of the Gourami family does build bubble nests. Dwarf Gouramis, Banded Gouramis, Honey Gouramis, Three-Spotted Gouramis, Pearl Gouramis, Moonlight Gouramis and Paradise Fish (which are in the same family as Gouramis) all build the classic, floating bubble nests.

Licorice and Croaking Gouramis who come from a different branch of the family also create bubble nests but tend to build them under the water’s surface, among aquatic plants, caves, or coconut shells.

How Do Gouramis Build Bubble Nests?

Gouramis that build floating bubble nests do so from a mixture of air bubbles, saliva, and other types of adhesive mucus secreted from their mouths which hold the nest together as a single mass.

Most Gourami species prefer to make their bubble nests among floating plants which help to support and stabilize the nest. But a few species, such as Dwarf Gouramis will go one step further and rip apart other live plants in the fish tank to incorporate the leaves into their nests!

It can be enthralling, watching a male Gourami zip about the tank, building up an ever-expanding mass of bubbles. You may even find his focus and dedication quite inspiring.

Male Gouramis are responsible not only for building the bubble nests but also for protecting the eggs and larval young too.

Female Gouramis will very occasionally add a few bubbles to the nest, but their main role in the breeding process is the laying of eggs.

It’s recommended to remove female Gouramis from the aquarium after spawning has been completed as they can sometimes try to eat their own eggs or young fry.

This carnivorous behavior also puts her at risk because the male will fiercely defend his brood from her or any other type of fish that pose a threat to his young.

Once the fries are free-swimming, however, it’s sometimes recommended to remove the male Gourami as well. With time, he may lose his paternal instincts and begin to prey on his own young as well.

How Many Eggs Does A Female Gourami Lay?

How many eggs a female Gourami lays depends a lot on her species and also her age and experience.

When they’re young, smaller Gourami species like Dwarf Gouramis may lay just 300 eggs in a single brood. But this really is dwarfed by a larger species like the 18-inch long Giant Gourami who may lay as many as 3000!

How Long Do Gourami Eggs Take to Hatch?

Gourami eggs tend to hatch quickly – after just 24-48 hours. But the larval hatchlings will usually stay immersed in the bubble nest for a further 3-5 days until they have consumed their egg yolk sacs and become free-swimming.

Can I Breed Gouramis In A Community Tank?

Some species of Gourami such as Dwarf Gouramis and Honey Gouramis breed quite readily and may try to make a bubble nest and spawn while still in a community tank with other species of fish.

But allowing Gouramis to breed in a community tank can be rather dangerous since the eggs and Gourami fries will likely get predated by the other fish. These other fish could in turn be attacked by the male Gourami, attempting to protect his offspring.

While Gouramis can be relatively peaceful fish, there will always be individual differences among them. I’ve had aggressive specimens of Three-spotted Gouramis, Moonlight Gouramis, and Dwarf Gouramis before. I ended up concluding that Gouramis are generally better kept alongside larger, robust fish rather than fragile smaller ones like Guppies, Platies, and Bettas.

Should I Remove A Gourami Bubble Nest?

If your male Gourami is building a bubble nest but you don’t want your pair to breed, you may be wondering – should I remove or destroy the bubble nest?

Removing a Gourami bubble nest isn’t an effective long-term solution to avoid breeding, because they will quickly try again! Male Gouramis can be quite determined, and if you destroy his nest, he’ll just start building another one the next day.

If you really don’t want your Gouramis to breed, it’s better that you remove either the male or female from your tank. A lone male Gourami will likely continue to build bubble nests anyway, but at least you know there will never be any eggs around to turn into more Gouramis!

Can I Move A Gourami Bubble Nest To A Breeding Tank?

If your pair of Gouramis have spawned fertilized eggs in a community tank, it’s unlikely that the young will reach maturity in such an environment. But moving a bubble nest to another tank is not a very good idea either. The bubble nest and eggs are quite fragile and attempting to move them could easily destroy the nest.

If you want to breed Gouramis, it’s much better that you first move a bonded pair to a specially designated breeding tank of at least 20-gallons where they can continue the rest of their courtship in relative peace and privacy.

How To Encourage Your Gouramis To Build A Bubble Nest

As I’ve hinted, certain species of Gouramis are pretty easy to breed. But others may take a bit more coaxing. If you’re struggling to get your Gouramis in the mood for love there are several steps that could help.

Yes, it may seem strange, but many Gourami species prefer to reproduce in shallow water. This is probably due to a survival instinct that tells them that shallow water is less likely to harbor predators. In the wild, some Gouramis may seek out pools that are only about 6-8 inches deep in water, so you may need to replicate these shallow water conditions in your breeding tank.

This follows from the first step: shallow waters will naturally be of a higher temperature than deeper water. Some species of Gourami prefer the water to be a sweltering 85 Fahrenheit to become ready for breeding, so you may need to turn your heater’s thermostat right up!

Flood the Tank With a Monsoonal Downpour

In the wild, some parent fish will wait until the rainy season to begin their courtship rituals. In the tropical far-east, most climates have a long dry season followed by several months of heavy rain. You can mimic these rainy conditions in your tank by performing a large partial water change with cooler, well-oxygenated water.

Treat Your Gouramis to Their Favorite Foods

Some Gourami keepers like to ‘condition’ their fish before breeding by feeding them a rich diet of meaty foods such as brine shrimp, bloodworms, and daphnia. Fish that feel well-nourished are more likely to feel ready to spend the extra energy required for breeding than those who are only receiving a bland diet of dried food.

Provide Your Gouramis With Some Plants – Especially Ones That Float

Both the adult fish and baby Gouramis enjoy swimming among plants, and floating plants are often integral to a Gouramis bubble nest. Without floating plants, the bubble nest can become unstable and begin to fall apart, especially if the aquarium water is being cycled with a strong current.

Following on from step 5, it’s essential that the water’s current in the aquarium is set to a minimum for the bubble nest to remain intact and successfully incubate the Gourami eggs and fry. If your filter has a flow setting, turn it down to the minimum – or even better, get yourself a gentle sponge filter which will also be ideal for the baby fish when they hatch.

Some parent fish just need to feel supremely relaxed before they’re ready to reproduce. A darkened tank with subdued lighting or a dense canopy of floating plants can help them to feel relaxed enough to prepare for mating.

Many Gourami breeders help the female Gourami relax before breeding by releasing her into the breeding tank several days before the male. This way she has a bit of time to herself to settle in and prepare herself before the feisty male starts chasing her around.

Lower the Water’s pH with Tannins

Gouramis tend to hail from waters that are soft and acidic in nature. Providing them with a tank environment that’s as close as possible to their natural habitat will help them feel at home and ready to mate.

Indian almond leaves are a popular source of tannins and antiseptic compounds that some aquarists believe help to create the right water conditions for breeding certain species of Gouramis.

Once your Gouramis have successfully mated, the eggs will soon begin hatching and within 3-5 days you’ll have hundreds of baby Gourami fries to look after!

As soon as the fries are free-swimming, you need to begin feeding them specialized foods that are small enough for them to eat. Powdered fry food, liquid feeds, and rotifers are all suitable options. After 5-7 days, you can also begin feeding them on baby Brine Shrimp.

After a few weeks, the fry should be able to consume regular flake food and can be transferred to a larger, more permanent aquarium.

Watching your pet Gourami build a bubble nest can be a fascinating experience. But if you’re serious about breeding Gouramis it’s important to have the right setup to accommodate both the courting parents and the fries that will emerge soon after.

With a bit of practice, you may be able to create the perfect environment for your Gouramis to breed and can witness this incredible process several times over the course of their lives.