Endler’s vs Guppy? Which Aquarium Fish Should Get Your Vote? 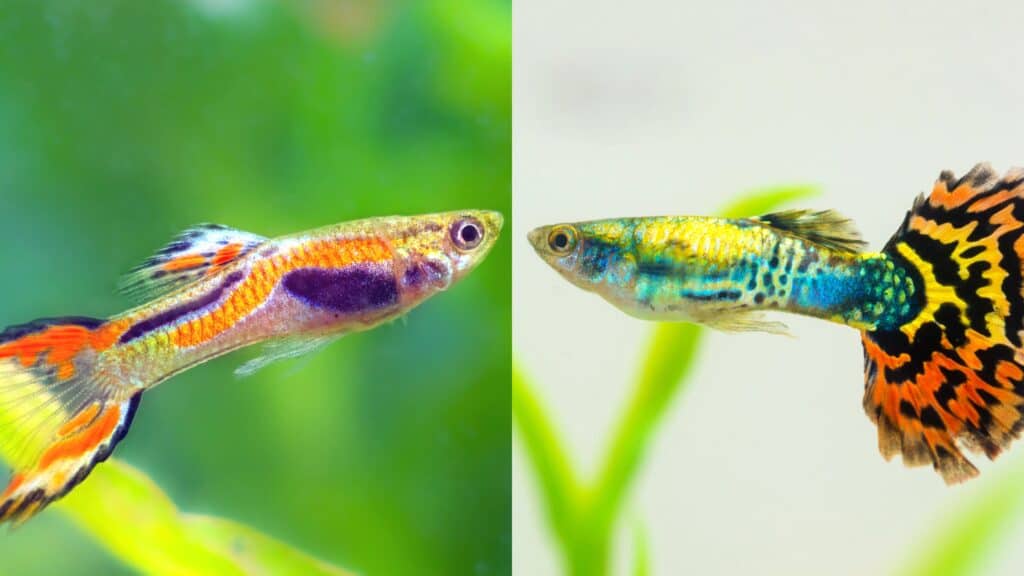 Endler’s livebearers and guppies are both extremely popular tropical fish you’ll often see in home aquariums. These brightly colored little fish seem to be an excellent choice for a small tank.

But what are the differences and similarities between the two species?

In this guide, we take a closer look at Endler’s vs. guppies to help you decide which to buy.

Although Endler’s and guppies are both small, brightly colored fish that can do well in a small tank, they do have quite a few notable differences.

What Are Endler’s Livebearers?

Although most hobbyists are familiar with the brightly colored, multi-patterned guppy fish, many have never come across the Endler’s livebearer.

Endler’s are a sub-species of the popular guppy fish and are named for John Endler, a Canadian biologist who rediscovered the species in 1975. The fish was originally found in 1937 by Franklyn F. Bond.

These beautiful little fish were an immediate hit with hobbyists, and numbers of Endler’s were consequently decimated by over-collection for the trade. However, since that time, the species has been captive-bred, and wild numbers are recovering.

Even so, not every fish store stocks Endler’s, and these fish are generally more expensive to buy than guppies.

Guppies are extremely popular tropical fish that are readily available and relatively inexpensive to buy.

There are thought to be around 276 variations of these remarkable fish, including Tiger guppies, Triangle-tail guppies, Swamp guppies, and many more subspecies of guppies. You can also find wild-type or feeder guppies that are used as a food source for predatory, carnivorous fish.

Guppies are found in tropical waters worldwide. In fact, the only continent without wild guppies is Antarctica!

Endlers generally live for two to three years. Females generally have shorter lives than males, largely due to the stress and trauma of frequent breeding.

Guppies have a similar lifespan of one to two years, although they can live longer if provided with optimal living conditions and a high-quality diet.

Perhaps the most striking difference between Endler’s livebearers and guppy fish is their size.

Note that size can vary between individuals and between different guppy species.

When it comes to body shape, there are marked differences between guppies and Endler’s.

Guppies have stockier bodies than the slimline Endler’s. That body shape is most notable where the fish’s body meets its tail.

In both species, the female is plumper than the male, especially when pregnant, as you would expect.

Female Endler’s and guppies are generally pretty similar in appearance.

Female Fancy guppies and the common guppy are a rather drab, gray color, while Endler’s are more of a golden-gray hue with translucent peduncles and hardly any color on the tail.

However, the males of both species are the real eye-catchers! Male guppies come in pretty much any color and pattern you can think of, including blotches, snakelike markings, and spots.

In comparison, male Endler’s livebearers have the same basic coloration of orange, blue, black, and green in distinctive blocks of metallic, neon colors.

The male common guppy has a large, rounded tail. However, it’s the male Fancy guppy’s tail that’s his most appealing feature to hobbyists.

Fancy guppies’ tails are basically round, but they are long, flowing, and decorated with gorgeous colors and patterns. You can also get Double Swordtail guppies, Fantail guppies, and Scarftail guppies to add variety to your community.

The male guppy’s tail looks absolutely stunning, shimmering, and sparkling as the fish swims around your tank. A group of male guppies can look incredibly beautiful against a backdrop of dark green plants and a neutral hardscape.

Male Endler’s also have exotic-looking tails. The tail is quite long and sometimes appears to be comprised of two smaller fins, with the lower one being longer and spike-like in appearance.

The gravid spot is an unusual feature that’s only seen on female, live-bearing fish. Basically, the gravid spot appears as a dark spot on the fish’s skin over her uterus.

Female guppies have a much larger gravid spot than female Endler’s. On guppy females, the gravid spot extends upward towards the fish’s flanks, whereas on the Endler’s livebearer, the spot is smaller and doesn’t extend as far up.

Male guppies and male Endler’s have a physical feature called a gonopodium.

Both species are active fish that hang out in all areas of the water column. Although not true schooling fish, guppies and Endler’s livebearers tend to gravitate together in loose groups.

If you have a community tank, you can keep guppies and Endler’s together with other peaceful species. That said, guppies can sometimes be fin nippers.

Guppies and Endler’s are both livebearers, meaning that they give birth to fully-formed live fry rather than laying eggs.

Despite that similarity, both species produce totally different numbers of fry at each spawning.

Endler’s produce up to 15 fry, whereas all variations of guppies can give birth to an incredible 30 babies! Remarkably, each baby guppy is 0.2 inches long at birth, fully formed, and can swim unaided immediately.

Both species reproduce roughly once every month. That’s great news for fish keepers, as it means you’ll never be short of fish. However, female guppies and Endler’s tend to have a relatively short lifespan due to the stress and physical effort involved with such prolific reproduction.

We recommend that you keep at least two female fish to one male to ease the burden on the females.

In this part of our guide to Endlers vs. guppies, we answer some of the questions people most often ask about these two popular fish species.

Q: Are Guppies or Endler’s Better?

A: Although both guppies and Endler’s are relatively easy to keep, guppies tend to be less hardy, probably due to much crossbreeding. Of the two species, Endler’s livebearers tend to live slightly longer than guppies.

So, of the two species, Endler’s might be a better option for you.

Q: Can Endler’s Mate With Guppies?

A: Yes, you can breed guppies and Endler’s livebearers to produce hybrids. The hybrids are not sterile, meaning that you can create many different color morphs by repeatedly crossbreeding your fish.

Q: How Big Do Endler Guppies Get?

Q: Are Endler’s and Guppies the Same?

A: Endler’s livebearers and guppies are not the same, although they do belong to the same family group (Poecillidae). Other members of the family include Swordtails, Mollies, and Platies.

Q: Are Endler’s Good for Beginners?

A: Endler’s livebearers are relatively hardy and easy to care for, although they do demand a clean aquarium, the correct water parameters, and a nutritious diet.

Q: Can Endler’s and Guppies Breed?

Yes, guppies and Endler’s livebearers can interbreed, creating a hybrid that’s referred to as Endler’s guppies.

Did you enjoy our guide to Endler’s livebearers vs. guppies? If you found the information in the article helpful, please share it.

Endler’s livebearers and guppies are small, tropical fish that are prized by hobbyists for their vivid array of colors and peaceful habits. These beautiful little fish are like swimming jewels, darting amid your aquascape to create a vibrant, sparkling display.

Both species are relatively easy to care for and share similar water conditions and diets, making them compatible tank mates. The two species can and will readily breed, making keeping them a fun, rewarding hobby.

Do you keep Endler’s livebearers or guppies? Which species is your favorite? Tell us in the comments box below.