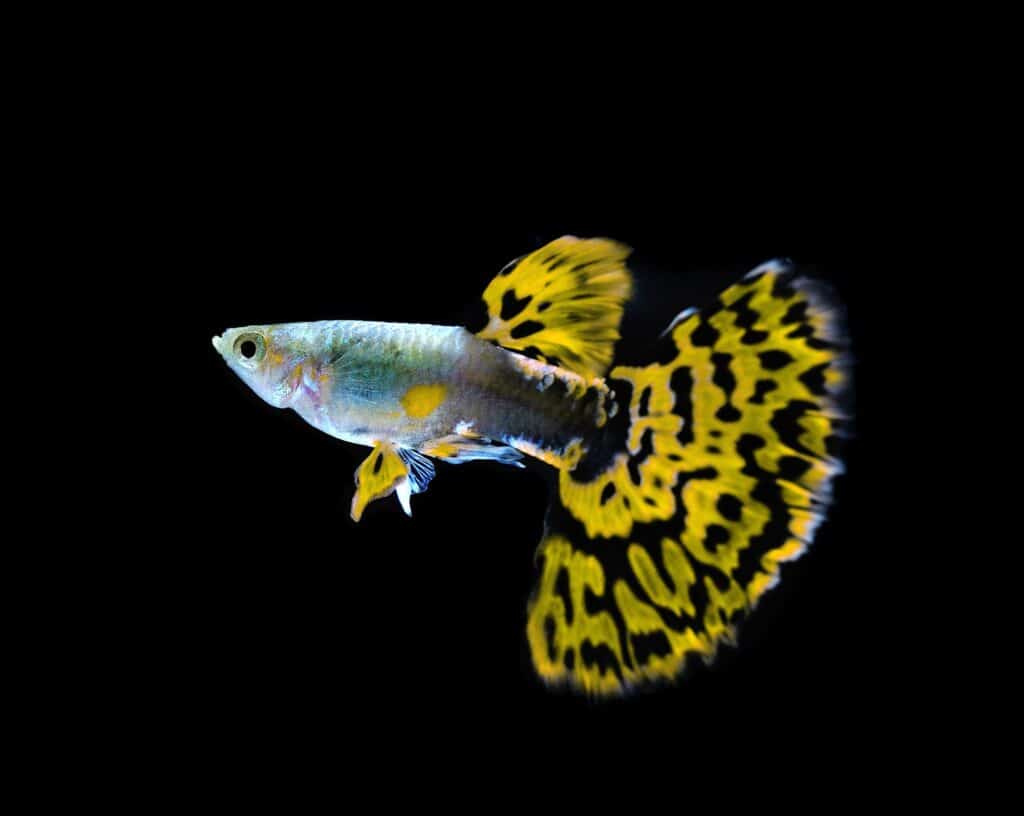 The guppy is just about the most popular tropical aquarium fish kept by hobbyists. As a result of selective breeding over many years,  the once dull-colored guppy is now one of the most brilliantly colored and sought-after fish you can find in your local fish store.

Guppies are generally hardy and resilient to a wide range of water conditions, and for that reason, these fish are often recommended as a suitable choice for beginners.

In this guide, we introduce the beautiful cobra guppy and tell you all you need to know about caring for and breeding these fish.

What is a cobra guppy?

Cobra guppies are a form of fancy guppy that has a spotted pattern across its body, resembling a snakeskin.

Each fish has unique color variations that are just like a fingerprint; you’ll never find two guppies that are exactly alike. Every guppy is a beautiful, multicolored work of art, which is why they are such firm favorites with fishkeepers all around the world.

The guppy’s personality is another reason for its popularity. Guppies are totally peaceful, confident fish that are extremely active, flitting around the tank, exploring, and interacting with their tank mates.

Although the cobra guppy is certainly a beautiful fish, there can be issues with stock quality. Unfortunately, because guppies are so easy to breed, mass-produced fish of poor quality can make the fish prone to diseases.

Also, many of the fanciest strains are highly inbred, which leads to genetic weaknesses, and that also decreases disease resistance and impacts the hardiness of the fish.

Poecilia reticulata was first described by Wilhelm Peters in 1859. In 1866, specimens that were collected by botanist Dr. Robert Guppy were imported to Europe, and the species was named after him.

Guppies are found widely across Central and Southern America, specifically Barbados, the Guyanas, Trinidad, Venezuela, and Brazil. Interestingly, guppies have been introduced to establish wild populations across Australia and the Americas, primarily for controlling mosquitos.

In nature, guppies live in a wide variety of water bodies, including ditches, canals, ponds, mountain streams, and warm springs. The habitat is typically densely planted, and the water flow is slow.

Guppies have elongated bodies that measure between 1.2 and 2.4 inches long.

There are many different varieties of guppies, and the number of color morphs is almost unending! Male guppies are the ones with the brilliant colors and flowing tails, whereas females tend to be rather more drab in coloration and lack the males’ fancy tail finnage.

An interesting fact about guppies is that they have teeth in both the lower and upper jaw, just like other members of the Poeciliidae family of fishes that includes platys, swordtails, and mollies.

All fancy guppies, including the cobra guppy, begin with a “ground color.” That is, the main upper body color that’s marked with what’s called a “cover.” The cover is a covering of brilliant, iridescent patterns and colorings over the fish’s lower body.

There are four ground colors:

There may also be a few other ground colors that are formed from combinations of those four main colors. Covers can be any conceivable color or combination of colors, most of which are given specific names, including:

Twelve different tail forms are recognized by the breeders of fancy guppies, including:

Each guppy variety is named by tail color. That means a guppy with a white body and a blue tail is called a blue guppy.

How long do guppies live for?

In captivity, guppies generally live for one to three years. However, it’s worth noting that these fish have a shorter lifespan if kept in warmer water, as that causes the guppies’ metabolism to increase.

Guppies of all varieties are extremely easy to care for, which is one of the reasons that they’re so popular.

In this part of our guide, we explain how to look after cobra guppies.

Guppies are small but active, and a small nano tank of around 5 gallons is sufficient to keep three individuals.

However, guppies breed at a tremendous rate, and they produce a lot of offspring. For that reason, it’s best to buy a 10 to 20-gallon aquarium.

Guppies enjoy a densely planted tank that has a fine gravel or sandy substrate that replicates their natural habitats. Heavy planting is important, as it helps to provide some food for the adults and hiding places for vulnerable fry.

Decorations can also be used to offer shelter, but don’t clutter the tank too much, as guppies are active swimmers that frequent all areas of the aquarium.

The lighting can be dim to bright, although if the lights from above are too bright, the guppies’ color will appear washed out.

The temperature in the aquarium should be between 68 and 82 degrees Fahrenheit. The pH range should be 6.8 to 8.5, with a water hardness of between 10 and 28 dGH.

Although guppies are not brackish water fishes, they do appreciate the addition of a small amount of salt to the water at a rate of roughly 1 to 1.25 teaspoons per gallon of water.

An efficient filtration system is important to keep the water clean and in good condition. However, guppies do not appreciate strong water movement, so the flow through the tank should be weak to moderate.

What do cobra guppies eat?

It’s recommended that you feed your fish several times each day, offering just enough food to last the fish for a minute or two per sitting. Don’t overfeed your fish, as uneaten food will simply decompose in the tank, polluting the water and adding to the burden on your biological filtration system.

Guppies are lively, sociable fish that are totally peaceful and suitable for life in a community tank with other good-natured fish. However, guppies will eat fish fry, so be sure to provide plenty of cover for babies if you’re planning on breeding from your fish.

Small fish species, such as tetras, corydoras, platy fish, and other characins, all make suitable tank mates. Since they’re such peaceful fish, guppies are also safe with shrimp, snails, and other invertebrates.

Although guppies are not naturally schooling fish, they do best in same-species groups, and you can create a beautiful display with a shoal of different colors and forms. Make sure that females out-populate males slightly so that the female fish aren’t hassled too much and the males don’t squabble.

Don’t mix guppies with fish that are known to be fin nippers. The guppies’ flowing tails are simply too great a temptation for fish like barbs.

It’s also not a good idea to keep a betta with guppies. Bettas are known to regard guppies as competitors for territory, probably because the guppy also has a flowing tail and bright colors, which combine to make the guppy resemble a male betta. The betta may attack the guppies, leaving both parties stressed, potentially injured, and almost certainly more susceptible to disease.

As cobra guppies are small fish, it makes sense to avoid large, predatory species that might look to make a meal of the smaller guppies. So, basically, you should avoid any fish that could easily swallow a guppy.

All varieties of guppies are probably just about the easiest fish species to breed in the home tank! All you need to do is keep a mixture of male and female fish, and let nature do the rest.

Guppies are livebearers, reaching sexual maturity at around seven weeks for males and three months for females. Ideally, you need one male with two or three females so the females don’t get too hassled and the males don’t fight over the ladies.

The spawning tank should be around 10 to 20 gallons and have gentle filtration so that the fish don’t get buffeted around. Be sure to provide plenty of dense planting, including floating plants, so that the newly born fry have somewhere to take refuge.

Pregnant females develop what’s called a gravid spot on their abdomen. That dark mark shows that the fish has live young developing inside her. Female guppies are pregnant for around 26 to 31 days before giving birth to live young. After giving birth, the female is ready to spawn again within four to eight weeks.

Although each brood of fry can number up to 100 individuals, the parents will eat the fry if they can. So, you’ll need to remove the parents or place the fry in a breeding trap out of harm’s way.

Cobra guppies don’t suffer from any particular diseases and are relatively hardy fish. Provided that you keep your tank clean, perform weekly partial water changes, and feed your livestock with the correct amount of a high-quality diet, your fish should remain healthy and happy.

However, there are a few common fish diseases that your guppies may suffer from.

White spot disease is just about the most common disease in tropical freshwater fish. White spot is caused by the aquatic protozoan parasite, Ichthyophiruis multifiliis, hence the disease’s other name, ich.

Fish with ich rub against the substrate and solid surfaces within the tank. After a few days, a sprinkling of white dots appears over the fish’s fins, gills, and body. Luckily, ich is easily treatable by elevating the water temperature to 82 degrees Fahrenheit and treating the tank with an over-the-counter ich medication.

Flukes are large parasites that latch onto the fish’s body and gills. Affected fish flick against the substrate or objects in the tank to try to dislodge the parasites and sometimes secrete excess mucus from their bodies in response to the irritation that the flukes cause.

Treat flukes by putting an antiparasitic medication in the tank water.

If your guppies develop white, fluffy growths on their bodies, it’s most likely a form of fungus. Again, treat the water with an antifungal medication that you’ll get from your local fish or pet store.

Bacteria of different kinds are present in all fish tanks, but they only become a problem if a fish is weakened by stress or sustains an injury, which provides an entry point for the bacteria.

If you notice that your cobra guppy has red patches on its skin, or ulcers, or sores, the fish likely has a bacterial infection. You can usually treat these conditions with an over-the-counter antibacterial treatment.

You can also help to prevent disease by washing new plants and decorations before introducing them to your aquarium. Also, any new fish should be quarantined for at least ten days before you put them into your main display tank.

Guppies of all varieties are usually readily available from all fish and pet stores. If you can’t find cobra guppies for sale here, you’ll certainly be able to source them from online breeders and dealers.

Because it’s so easy to breed guppies, they are available in large numbers, and prices are consequently low.

The cobra guppy is just one variety of a wide range of these beautiful little fish and makes an excellent addition to most peaceful community aquariums.

Guppies are easy to care for and cheap to buy, making them the perfect choice for a beginner who wants a small fish to add to their tropical, freshwater tank.