Is Your Betta Fish Staying at the Top of the Tank? 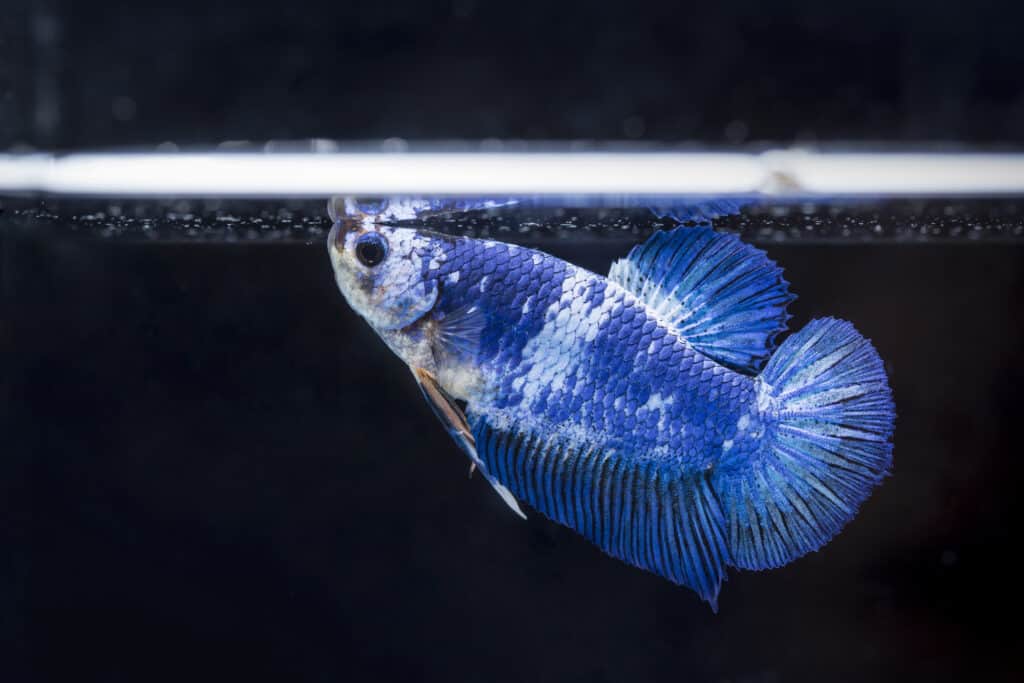 Betta fish are known for their preference to inhabit the mid to upper reaches of the water, rather than swimming around on the bottom. But if your pet betta is spending all of its time at the surface it could indicate a problem.

There are several possible reasons for your betta to be staying at the top of the tank, and each one has its own solution. Let’s take a look at them in more depth here.

As you may know, betta’s possess a superpower among fish.

Using their specially adapted labyrinth organ, they can breathe oxygen not only from the water but also from the air. This remarkable feat of evolution means that bettas can survive in waters that other fish would die in.

But this doesn’t mean that bettas enjoy being kept in low-oxygen environments.

Where there is sufficient dissolved oxygen within the water, they will happily spend much of their time in the mid-upper reaches of the aquarium, mostly using their gills to respire oxygen from the water.

But if your betta is spending all his time at the surface of the water, gasping for air, you might well have an oxygen deficiency in your water.

Oxygen depletion can be fairly serious, especially if you have other fish or invertebrates in the tank that can’t breathe oxygen from the air.

Poor water quality can lead to oxygen depletion, and a betta fish generally feeling stressed by bad quality water may also hang around looking poorly near the water’s surface.

Betta tanks need to be equipped with a reliable filter, as well as a routine weekly or bi-weekly tank cleaning and partial water change to remain a clean and healthy environment for your betta to thrive in.

When I introduced my first betta to my aquarium many years ago, he tended to hang around at the surface of the water. I later realized that my water was probably too cool for him.

Whereas most of my other community tank fish were happy in water temperatures of around 76 Fahrenheit, bettas are warmth-loving fish that prefer a temperature range of between 78 – 81 degrees Fahrenheit.

The reason that betta will move towards the surface in a tank that’s too cool is that warm water tends to rise to the surface of the tank, meaning the upper layers of water will be the warmest place!

And even if your thermometer is showing 78 Fahrenheit next to your heater, if your aquarium water circulation isn’t strong, then other parts of the tank may be a little cooler.

Bettas don’t like strong currents, but to be sure that all parts of the tank are warm enough, it’s a good idea to position your filter’s output flow close to your heater so that the heat is distributed evenly throughout the tank.

Another tip for accurate heating is to place your aquarium thermometer in the middle reaches of your tank, away from your heater. This way you’ll get a better reading of the average overall temperature of your aquarium and can make sure that it’s suitable for your fish.

It may seem surprising, but your betta might also be hanging out at the top of the tank because of water temperatures that are too high!

A betta’s temperature preference for 78-81 Fahrenheit is quite a tight range, and if temperatures exceed this, oxygen levels may begin to go down.

As opposed to a betta fish that’s simply residing at the surface to stay warm though, a betta that’s struggling for enough oxygen will be constantly breathing from the surface.

Follow the guidance above to get accurate temperature readings and even heat distribution in your tank, and turn down your heater’s thermostat if necessary.

One of the more serious reasons that your betta may be residing near the surface of the water is a problem with their swim bladder.

A swim bladder is a special organ filled with air that fish use to control their buoyancy in the water. If something has gone wrong with his swim bladder, your betta may appear to be a bit disoriented, struggling to command his position in the aquarium.

Sometimes, swim bladder disease will make a betta fish swim on its side, upside down, or even around in circles. Other times your betta will be stuck on the bottom of the tank, unable to elevate itself.

But swim bladder issues can also make your fish get stuck at the surface reaches of the aquarium, unable to descend.

Swim bladder problems are sadly fairly common in betta fish and are usually caused by the number one mistake in betta keeping: overfeeding.

A betta that overeats is prone to bloating, constipation and, in extreme cases, swim bladder problems.

Swim Bladder disorder can be remedied by fasting your betta, feeding them cooked peas as a laxative, or in more severe cases, by using Epsom salts. If you treat the condition promptly enough, your pet fish should make a full recovery.

Bettas are both delicate and aggressive fish and for the sake of simplicity, many betta owners prefer to keep their betta fish in a tank on their own. But if you do decide to keep other tank mates with your betta, then choose carefully.

Aquarium fish species like barbs, serpae tetra, and gobies that like to nip fins must always be avoided, since a betta’s long, flowing fins may prove too much for them to resist.

Also, if the tank is stocked too densely with fast-moving fish like danios, your betta may feel overwhelmed and attempt to retreat to a higher corner of the tank.

Better choices of tankmates for bettas include rasboras, white cloud mountain minnows, Amano shrimp, corydoras catfish, and Kuhli loaches. Provide plenty of hiding places such as rocky caves and bushy plants to help your betta and your other fish feel safe.

If your betta is actively swimming around at the surface of your aquarium, looking lively and energetic, the chances are that he just wants feeding!

Whereas bettas that are stressed or sick will tend to sulk, with closed fins at the top of the tank, a hungry betta will be much more active, almost as if he wants to get your attention and say to you: ‘Hey you over there! It’s feeding time!’

But although it’s cute, be careful not to always give in to a betta that asks for food! As we’ve already discussed, overfeeding is one of the main causes of ill health in betta fish, and their gluttonous appetites mustn’t be indulged!

Feeding your betta twice a day with only as much food as they can eat in 2 minutes is plenty, and having a well-defined feeding regime will also discourage your betta from wasting time and energy by begging for food all day.

Ammonia is one of the most toxic chemicals to fish, and it’s also the main compound that they excrete in their feces. This means you need a reliable way to manage ammonia levels to avoid poisoning your fish.

In a tank that’s not properly cycled or filtered, ammonia and nitrite levels can build up, causing burning on your fish’s gills and making it difficult for them to breathe. Your betta’s natural instinct in this situation may be to gasp for air at the surface of the water.

Ammonia and nitrite poisoning is extremely serious and can kill your fish within hours. If your betta has reddish gills, inflamed eyes, and appears lethargic, you must perform a water test as soon as possible to see if your water contains ammonia.

Ammonia and nitrite levels should be kept to zero, and if levels exceed 0.25 ppm, you must perform an immediate emergency water change of 50% to temporarily refresh the water while you work on the underlying issue.

Ammonia and nitrite problems are almost always connected with an ineffective aquarium filter, which should convert all of these toxins into less harmful nitrates via beneficial bacteria in a process known as biological filtration.

There are several reasons why your betta fish might be hanging around at the surface of the water.

While some of the causes, like seeking food, are quite benign, others such as ammonia poisoning or swim bladder disease are very serious and need to be rectified immediately to avoid disaster.

Several of the reasons for a betta to be stuck at the surface of the tank are connected with inadequate filtration. Betta fish always need a filter, and you can find out why in our dedicated article here.