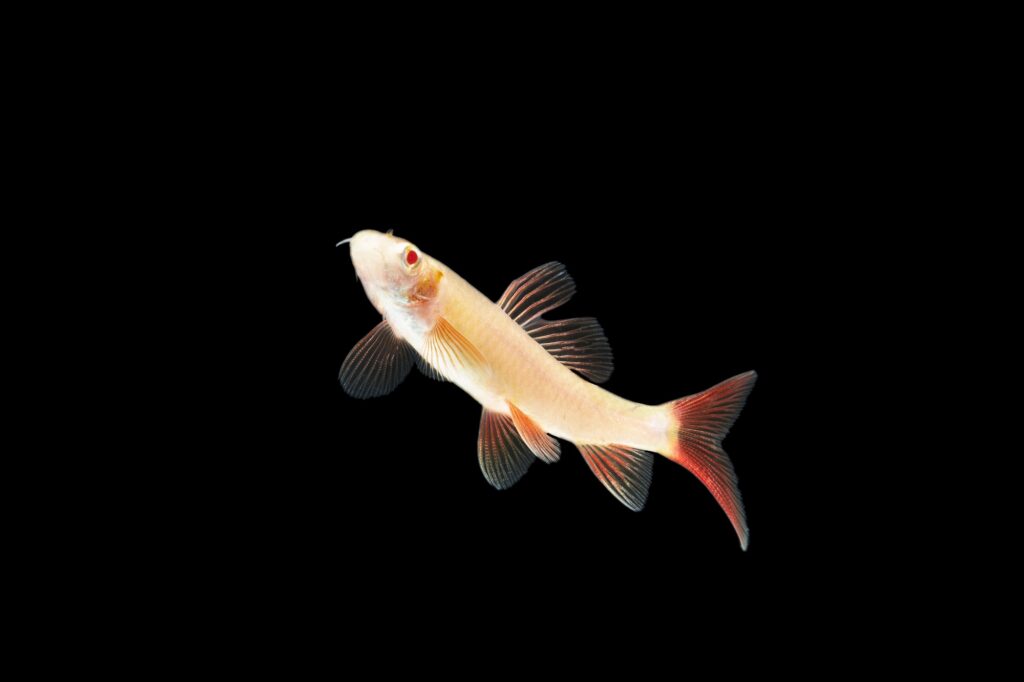 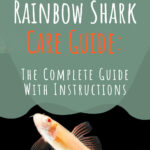 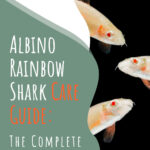 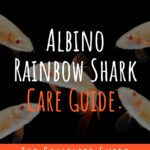 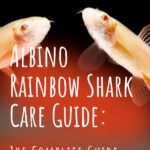 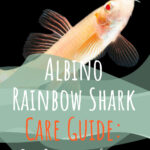 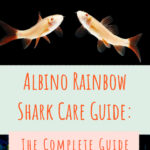 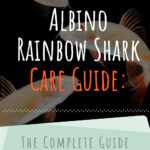 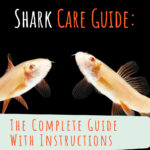 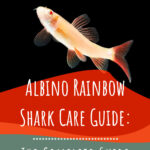 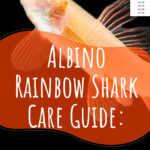 If you want an unusual, beautiful freshwater fish to add to your collection, you might want to consider the albino rainbow shark (Epalzeorhynchos frenatum).

In this care guide, we tell you everything that you need to know about this perennial aquarium favorite.

What’s in a name?

The rainbow shark is known by many names, including:

The fish is a member of the Cyprinidae family and has the scientific name Epalzeorhynchos frenatum. The albino rainbow shark is an artificially produced variant of the wild rainbow shark.

The rainbow shark comes from the Mekong, Chao Phraya, and Xe Bangfai basins in Indochina.

Despite the fact that the numbers of rainbow sharks are decreasing in the wild, primarily because of loss of habitat, the species appears on the IUCN Red List with the population ranking at the least concerning level.

Albino rainbow sharks are a variant of the species that was created through selective breeding, and they aren’t generally found in the wild.

The rainbow shark inhabits sandy-bottomed bodies of water, primarily rivers and small tributaries where it lives on the river substrate, feeding on algae and plankton. During the rainy season, the fish migrate to flooded areas, returning to their home rivers when the floods recede.

The albino rainbow shark is a stunning fish with a white body, bright orange-red fins.

These are long, torpedo-shaped fish with flat bellies, pointed snouts, and upright dorsal fins, all of which give the fish a shark-like appearance, hence its common name. The fish reach sexual maturity when they are about four inches long. Female specimens have a thicker body than males, and males are generally brighter in color than females.

When fully grown, albino rainbow sharks reach around 6 inches long, and they generally live for between five and eight years in captivity, as long as they are provided with a well-maintained tank and a high-quality diet.

Albino rainbow sharks live on the substrate, but they are also pretty active swimmers, spending much of their time foraging for algae on the bottom of the tank.

The fish will chase away any others that wander into their territory.

Albino rainbow sharks are very territorial, and that can cause conflict in the tank if conditions are cramped.

Juvenile rainbow sharks are more tolerant of each other and are actually rather timid creatures. However, that usually changes when the fish get older. That said, you can include the rainbow shark in a community setup provided that you choose species that tend to stay in the upper parts of the water column.

As previously mentioned, you should avoid including other bottom-dwellers, as the albino rainbow shark will definitely pursue and nip the intruder.

You can mitigate the shark’s behavior by including lots of caves, hiding places, and overhangs in your aquarium. Try to aquascape the tank with bunched plants and wood that form natural barriers within the environment. That makes it possible for the albino rainbow shark to establish his territory without putting others at risk.

Also, be careful that you don’t overstock the tank. If you have too many fish in the tank, there’s a higher likelihood of interlopers straying into the albino shark’s patch and causing a confrontation.

Fish species to include

Peaceful fish species that can defend themselves make a good companion for rainbow sharks. So, you could try including danios, gouramis, barbs, and Rainbowfish. Some hobbyists report that introducing the albino rainbow shark last to the aquarium can help to prevent the fish from claiming the entire tank as his territory, reducing aggressive behavior.

Are rainbow sharks aggressive when kept in groups?

Adult rainbow sharks typically don’t get along when kept in groups. In nature, rainbow sharks are solitary. These fish are not shoaling creatures, and they don’t tolerate others of their kind sharing the same immediate territory.

If you do want to try keeping more than one albino rainbow shark, you’ll need a very large aquarium that allows at least one square meter of area per fish.

In the event of a confrontation, the rainbow shark will nip and bully the other fish. However, provided that the other fish has space to escape and keep away from the shark, it’s unlikely that fatalities will occur.

That said, the stress of continual confrontations and fighting will weaken the fishes’ immune systems, leaving them open to attack by bacteria and parasites.

It’s not a good idea to include other freshwater shark species, cichlids, and catfish in the same aquarium as the semi-aggressive albino rainbow shark.

Now you know more about the albino rainbow shark, and if you think that one of these guys would make a nice addition to your collection, it’s important that you know how to care for them well.

Albino rainbow sharks are very active, bottom-dwelling fish that need a roomy tank with lots of swimming space. For that reason, a rectangular, shallow tank is best.

In general, these fish are not known to be jumpers. However, sometimes when albino rainbow sharks are introduced to a tank as newbies, the excitement and stress of arriving in the new habitat can prompt them to jump. So, you should have a tank with a cover slide and a tightly fitting lid, just in case.

These fishes are highly territorial and active, needing lots of space to swim. For that reason, you should provide the fish with a tank with at least a 50-gallon capacity. If you want to risk keeping a group of rainbow sharks, you’ll need an aquarium that is at least 6 feet in length and has a capacity of 125 gallons.

Rainbow sharks inhabit rivers where the current is pretty strong, and there’s plenty of dissolved oxygen in the water. So, you’ll need a fast flow in your aquarium and possibly a bubbler, too.

External canister filters with an additional powerhead can work well, giving you excellent flow and good oxygenation, too. The filtration system you choose must provide you with a good GPH. GPH stands for gallons per hour and refers to the total number of times the volume of water in your aquarium is pumped through the filter in one hour. The bare minimum GPH you need is four times the volume of your tank.

Albino rainbow sharks are tropical fish that need warm water between 75° to 81° Fahrenheit. The pH range should be between 6.5 and 7.5 with a water hardness of 5 to 11 dKH.

The most suitable substrate for the albino rainbow shark is sand or very fine, smooth gravel, which mimics the fishes’ natural river habitat.

These fish are omnivores, needing a diet of algae, some plant matter, and meaty protein, like brine shrimp. They eat algae in the riverbed environment of their natural habitat, decomposing plant matter, insect larvae, and zooplankton. Captive specimens will devour pretty much any food that lands on the substrate, including pellets, live food, tropical fish flakes, frozen meaty foods, blanched fresh veggies, and algae that’s growing on the surfaces within the tank.

It’s crucial that you feed growing juvenile specimens a good diet to ensure that they grow properly and their colors remain vibrant and bright.

How much should you feed your albino rainbow shark?

It’s best that these fish eat twice a day, offering just enough to keep the fish busy for a couple of minutes at each feed.

Take care that you don’t overfeed your fish, as uneaten food will decompose in the tank, pollute your water, and place an extra burden on your biological filter.

Albino rainbow sharks are generally hardy fish that enjoy pretty good health. You can help to keep your fish thriving by keeping the tank clean, maintaining the correct water parameters, and feeding your fish a nutritious diet.

Healthy rainbow sharks are very active fish that are continually grazing on any algae that they find growing on the substrate and surfaces within the tank. These territorial sharks will also chase away any tank mates that accidentally invade the shark’s patch.

Lethargy and lack of appetite are both signs that all is not well with your albino rainbow shark. There are a few other conditions that can affect these fish too:

Ich is also known as white spot disease and is just about the most common disease in tank-kept fish. The disease is caused by the ciliate protozoan parasite Ichthyophthirius multifiliis. Fish with this condition rub and flick against the tank decoration and substrate. As the disease progresses, a rash of tiny white spots appears on the fish’s body, fins, and gills.

Luckily, ich is easily treatable, provided that you catch the condition quickly. Increase the water temperature to 82 degrees Fahrenheit for three days, and treat the water with an over-the-counter white spot treatment that you’ll find in your local fish store.

Flukes are parasitic creatures that attach themselves to the fish’s gills and body. Affected fish try to remove the parasites by flicking or rubbing against objects within the tank, as well as producing excessive amounts of mucus on their bodies.

Flukes can be treated by treating the tank with over-the-counter antiparasitic medication.

The fungus can be treated by dosing the tank with over-the-counter antifungal treatment.

Bacterial infections are very common in aquarium fish. Stress, minor bumps, and scrapes can leave the fish open to attack by bacteria that already exist in the tank. Fish with bacterial infections often develop red patches on their skin, ulcers, and sores.

Bacterial infections can be treated with over-the-counter antibacterial medication.

Rainbow sharks are sexually mature when they grow to be more than four inches long.

In the wild, spawning takes place between October and November, depending on the water temperature and number of daylight hours. These fish are egg-layers, and once the eggs have been laid and fertilized, they usually hatch after a week or so.

Unfortunately, it’s almost impossible to breed these fish in the home aquarium. That’s primarily because the species is aggressive within the confined space of a fish tank. For that reason, most of the albino rainbow sharks that you see for sale in pet stores and online are bred on commercial fish rearing operations in Southeast Asia.

These freshwater fish are readily available from most high street fish stores, and you can also buy them from online dealers for just a few dollars each.

You can only keep one of these fish, as they are highly territorial and will fight each other. However, the albino rainbow shark can live amicably with a selection of peaceful tank mates that live in the upper areas of the water column that won’t impinge on the shark’s substrate home.