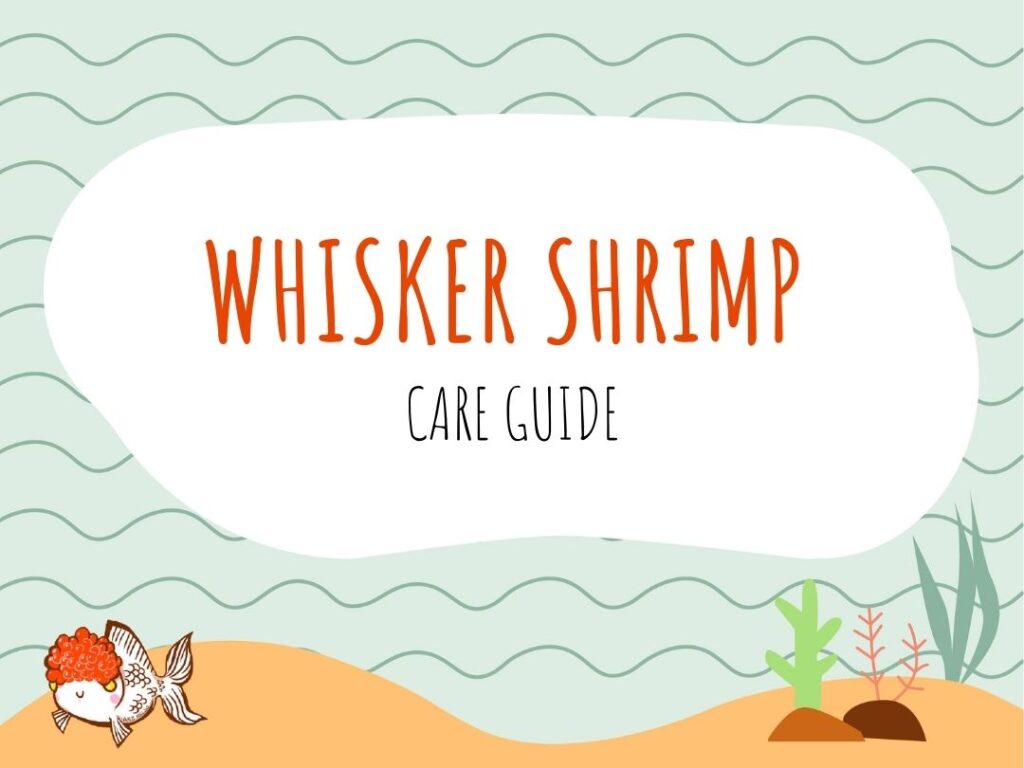 Many hobbyists like to include freshwater invertebrates, such as shrimp, in their setup, partly for the entertainment that these busy little creatures provide and for their habit of cleaning the tank of debris and organic matter.

Generally, aquarium shrimp are small, peaceful creatures that spend their lives foraging, breeding, and generally keeping themselves to themselves. There are many different species of freshwater shrimp available to choose from, and in this guide, we focus on the Whisker shrimp.

Overview Of The Whisker Shrimp

These shrimps are native to Nepal, and their appearance can really add something to the appearance and general ambiance of your aquarium.

However, one unfortunate and often overlooked fact about this shrimp species is that they can be very aggressive tank mates and will attack other shrimp, snails, and small fish. The Whisker shrimp can also be the victim of larger fish species, too.

The feisty Whisker shrimp is often confused with the Ghost shrimp. However, although these two species look very similar because they have transparent bodies, their behavior is somewhat different. For that reason, you must always double-check that you are purchasing the correct species of shrimp when you’re buying them in-store and online.

These attractive pet shrimp are notorious for their aggressive temperament. Whisker shrimp have lots of sharp teeth that they will readily use to kill other shrimp, snails, and even small fish. Many keepers have awakened in the morning to discover that their innocent-looking Whisker shrimp have completely dismembered their beloved collection of colorful shrimp and tiny tetras.

There are a few ways to avoid problems with these aggressive see-through crustaceans, including:

Whisker shrimp are nocturnal, so if you want to watch them doing their thing, you’ll need to have a moonlight lighting rig or similar arrangement to observe them. These industrious little creatures spend much of their time scavenging for biofilm and debris in your tank. As you will see, these animals always seem to be hungry. That’s a big plus point since their voracious appetite makes these shrimp an excellent aquarium cleaning crew.

The Whisker shrimp prefers a well-planted tank with plenty of dense cover in which they can hide. However, if you overdo the live plants, you won’t be able to enjoy your shrimp, so don’t go overboard.

The Whisker shrimp is dazzling in appearance! The shrimp has a grayish, transparent body that enables you to see right through the creature’s skin to view its internal organs; crazy!

As mentioned above, the Whisker shrimp has a grayish translucent body, torso, and tail. These shrimp have between five and eight ventral teeth protruding from their rostrum, and that feature enables the shrimp to be so dangerously aggressive.

It is easy to breed the Whisker shrimp in captivity, provided that you have sufficient numbers of both sexes.

In this species of shrimp, there’s not much difference between the two sexes, although males are generally a bit smaller than female shrimp. Unless you’re considering starting a Whisker shrimp breeding project, you don’t need to differentiate between males and females.

In this part of our guide to the fascinating, feisty Whisker shrimp, we explain how to care for these creatures.

Whisker shrimp are pretty small, growing to only a couple of inches in length. For that reason, these creatures are happy in a smallish tank of around 5 gallons or more, provided that they are kept in optimal conditions.

However, as previously mentioned, you must be careful to avoid an overcrowded tank, or you risk the shrimp becoming aggressive and territorial. Ideally, if you want to keep your Whisker shrimp in a community setup, you should aim to have a minimum of a 20-gallon tank.

When it comes to their tank requirements, Whisker shrimp are easy to look after, spending their time at the bottom of the aquarium. That’s great, as it means you can decorate the upper areas of the tank as you wish without worrying about the shrimp.

These shrimp are content with any substrate, including aquarium soil, gravel, or sand. So, you can choose the look you want for your tank and the best medium for your plants.

Plants are acceptable in a shrimp setup, providing nutrition for the shrimp. Living plants are also excellent for the water quality in your aquarium. Plants help filter out harmful toxins from the tank water, which they use as fertilizer. As part of the photosynthesis process, plants also utilize CO2 and produce oxygen, which further benefits the general health of your fish tank. However, be aware that your shrimp will hide away in the plants, so you might not get to see much of them if you go overboard with your planting.

An excellent alternative to regular plants is Marino moss balls. The shrimp love to forage on these weird, bright green spheres of moss, which are just as beneficial to the environment in your aquarium as other plant species.

Whisker shrimp don’t have any specific lighting requirements. So, your regular aquarium lighting will be fine for these animals.

Like most fish and invertebrate species, Whisker shrimp need fresh, clean water to thrive. So, you need to install a filtration system in your tank to ensure impeccable water conditions for your shrimp. However, you might need to cover the filter intake pipe to prevent the tiny Whisker shrimp from getting sucked into the filter.

Keep the tank clean by carrying out partial water changes every week, maintaining the filtration system correctly, and avoiding overfeeding your shrimp. Excess food will rot on the bottom of the tank, polluting the water.

Dirty water and water that contains high levels of ammonia, nitrites, and nitrates will endanger your shrimp. The shrimp are also quite sensitive to temperature changes, preferring a range close to that of their natural habitat.

So, the optimal water parameters for Whisker shrimp are:

One crucial thing to note is that these aquatic animals cannot tolerate water additives, including some fish medications and plant fertilizers that contain copper. So, if your fish require medication containing copper, we recommend that you treat them in a separate hospital tank.

If you’re planning on keeping a tank dedicated solely to Whisker shrimp, you can keep these creatures in groups, allowing one inch of shrimp per gallon of water in your tank.

When selecting compatible tank mates for the Whisker shrimp, remember that they need plenty of space to move around and claim as a territory. For that reason, it doesn’t usually work to include large bottom-feeding species, such as plecos, loaches, and catfish. Also, some large omnivorous species will make a meal of the shrimp.

As mentioned earlier in this guide, Whisker shrimp can be pretty aggressive characters, so it’s best to avoid keeping any other types of small shrimp species with these guys. Aquarium snails can also fall victim to the shrimp unless you go for one of the larger species of mollusks.

Most medium-sized fish species should be okay with the snails. However, we recommend that you stick to species that inhabit the middle to upper areas of the water column where the fish won’t come into potential conflict with the shrimp.

What Do Whisker Shrimp Eat?

Whisker shrimp are omnivores, feeding on organic matter, leftover foods, and general detritus that they find in your tank. That makes the shrimp an excellent addition to your tank, as they provide a cleaning service. You can also feed the shrimp with prepared wild shrimp food and flake foods, and they enjoy grazing on spinach and cucumber as an occasional treat.

Whisker shrimp are voracious eaters! If your shrimp don’t get enough to eat in the aquarium, they will quickly turn on other tank residents, especially small snail species, other shrimp, and small fish that come within reach.

However, don’t overfeed your shrimp, as any uneaten food will quickly decompose in your tank, spoiling the water conditions.

How To Breed Whisker Shrimp

Breeding Whisker shrimp in your home tank is not impossible, but it’s not as easy as with some other shrimp species. So, if you’re a beginner, it might be better to start your shrimp breeding experiment with a different species that’s a little easier to work with.

To breed these interesting shrimp, you will need to set up a dedicated tank with specific water conditions.

For success in breeding this species, you’ll need to include one male to one or two females in the tank.

The water in the breeding tank should be at a constant temperature of between 65° and 82° F. Once the female Whisker shrimp finds the water conditions to her liking, she will produce eggs, carrying them on her swimmerets until she’s ready to be fertilized by the male. One male shrimp can cope with fertilizing the eggs carried by two females.

Throughout the breeding process, be sure to carry out regular water changes to keep the basic conditions healthy for the shrimp and the babies when they hatch.

Once the eggs have been fertilized, you can separate the males and females. It usually takes around three weeks for the eggs to hatch. The juvenile shrimp will live on whatever decomposing plant and animal matter they can find within their environment.

Are Whisker Shrimp A Good Choice For Your Tropical Tank?

The Whisker shrimp might be a good choice if you have a large, tropical aquarium with no small invertebrates or tiny fish species.

These amazing aquarium shrimp will not disappoint with their otherworldly looks, pretty, transparent sheen, and busy habits. However, these beautiful nocturnal shrimp have a bad reputation, and they will happily attack, kill, and eat any smaller, vulnerable animals that come within their territory. Also, these feisty creatures can fall victim to large, aggressive species and must be kept in a peaceful community setup of fish that inhabit the mid to upper area of the water column.

Did you take the plunge and buy some Whisker shrimp for your tank? How do they get along with their tank mates? Did you manage to breed Whisker shrimp successfully? Tell us your story in the comments section below.