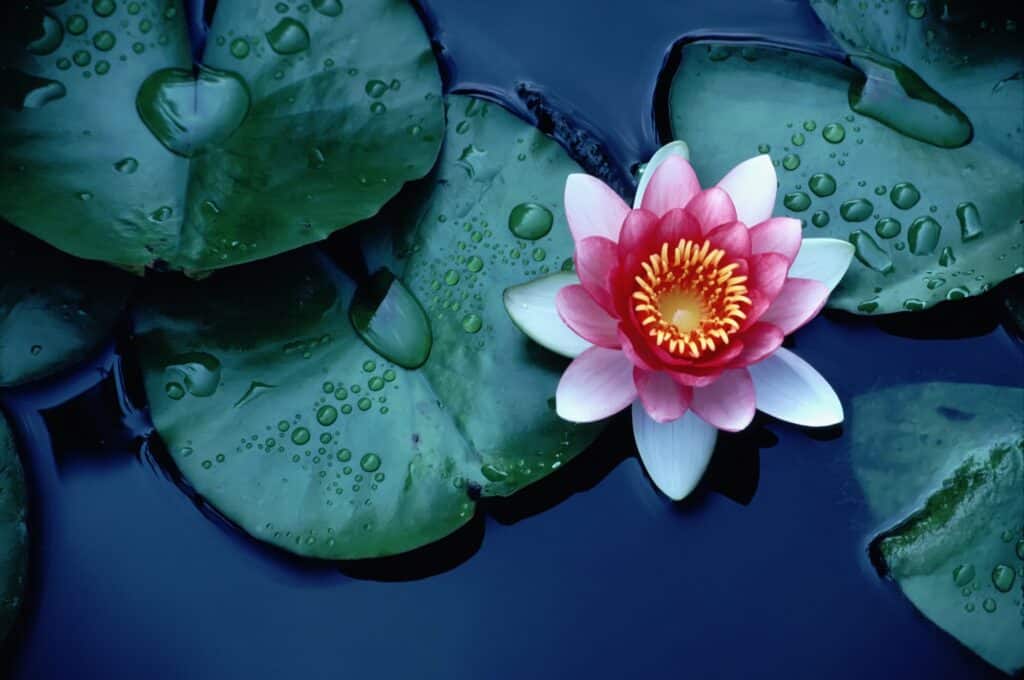 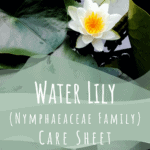 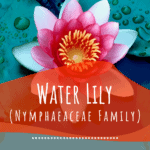 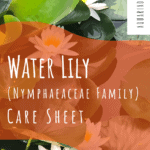 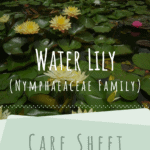 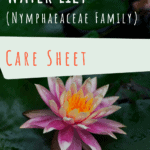 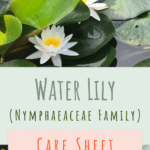 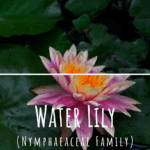 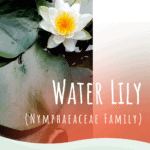 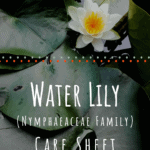 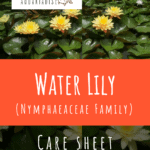 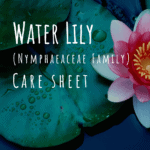 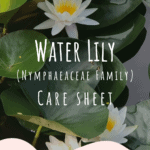 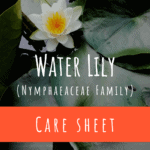 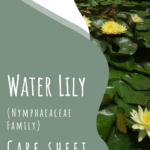 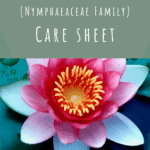 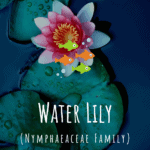 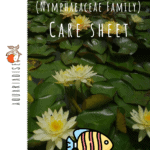 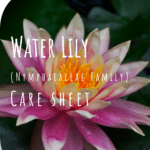 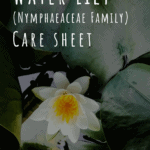 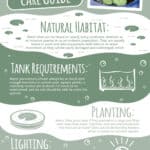 Every classic pond has its signature water lily. These decorative plants elegantly float on the surface of ponds and lakes, bursting into color once their flowers bloom every season. Water lilies are not difficult to take care of and will create areas of shade and protection for an assortment of aquatic wildlife in your pond or other prepared plant containers.

Keep reading to find out everything you need to know about water lilies and adding these floating plants to your freshwater pond or aquarium!

Water lilies belong to the Nymphaeaceae family, which contains about 6 accepted genera as of October 2020. Of these, Nymphaea is known for some of the most beautiful and hardy species.

In general, there are two types of aquatic water lily in the hobby: hardy and tropical. Hardy water lilies are able to withstand lower water temperatures and will usually come back the next spring, like a perennial plant. Tropical water lilies need to be kept in tropical water temperatures at all times; they can be moved inside for colder seasons or entirely new plants can be replanted the following year like an annual plant.

Is a water lily the same as a lotus?

No, a water lily is not the same as a water lotus. Water lotuses are part of the Nelumbonaceae family with the only known genus being Nelumbo; this is a completely different family from water lilies (Nymphaeaceae family), though they were once considered one and the same.

Nelumbo sp. have peltate leaves, which means that the petiole attaches near the center of a fully rounded leaf; as we’ll discuss later, Nymphae sp. have a signature slit that runs from the edge of the leaf to the center. Seed production and germination are very different between the two families as well.

With about 70 different species recognized, water lilies thrive in many different temperate and tropical ecosystems. Water lilies can be found on nearly every continent, whether as an invasive species or as an endemic population. They are usually found in pond and lake ecosystems with little to no water movement as they can be easily damaged and submerged, which will prevent the plant from performing adequate gas exchange.

Water lilies are rooted in the soil, so they need relatively calm conditions that won’t push around their iconic lily pads and large flowers. While they usually do best in shallower waters, hobbyists have had success growing them between depths of 4-6 feet (122-183 cm); in general, it is best to plant water lilies in shallow conditions than chance planting them in deeper waters.

These plants are an important aspect for many pond and lake ecosystems as they provide food and shelter for many different aquatic species, including frogs, fish, and insects. Water lilies are also an important plant addition to many manmade waterways for decoration and nutrient uptake. However, their hardy nature and relatively fast propagation can lead to overgrowth and clogged waterways, especially with some invasive species; care should be taken to avoid keeping invasive plant species near natural inlets and aquatic environments.

In general, water lilies are very easy to identify, though they may be confused with water lotus at times; the main way to distinguish the two is by seeing if the leaf has a slit in it. Water lilies come in many different shapes and sizes though there are not many species. Most species are easily identified by their green and waxy rounded lily pads with a vibrant flower sitting effortlessly on the surface of the water.

Water lilies only bloom once a season, which is one of the easiest ways to identify them as many lily pads can look similar across species. Flowers will only stay in bloom for about 2-4 weeks during the spring and summer months. Once they start the die, the wilting flowers may be removed.

Some common species of water lily you are likely to come across in both nature and in the pond-keeping hobby are:

Mexican water lily (Nymphaea mexicana). The Mexican water lily is known for its beauty and its invasive range throughout much of the southern United States. Also known as the yellow water lily or banana water lily, these plants have beautiful yellow flowers and oval notched leaves that can reach 9 inches (22.9 cm) across.

European water lily (Nymphaea alba).The European water lily is very similar in appearance to the American white water lily, but has much broader petals and many small yellow stamens in the center. The leaves are also nearly the same in size but can reach 10 inches (25.4 cm). European water lilies can be found in most European countries as well as in parts of Asia and North Africa.

Most water lilies can tolerate a wide range of environmental conditions when it comes to lighting and nutrients. Some hobbyists are able to keep these aquatic plants in glass aquariums and rubber tubs while others choose to plant them in their outdoor pond.

In general, it is best to go with a water lily species that is endemic to your region; not only will your plant be able to withstand normal conditions better, but you do not run the risk of accidentally introducing a foreign plant into a nonindigenous ecosystem.

Water parameters should always be in check with enough nutrients to sustain your aquatic plants; a relatively neutral pH of about 7.0 needs to be maintained, and no salt should be able to enter the system. Most species need 4 to 6 hours of direct sunlight to properly produce flowers. If planning on keeping tropical water lilies, the water temperature should not fall below 70° F (21.2° C) and a heater might be needed.

It is important to note that water lilies are delicate plants and can easily be torn or drowned if left too close to a fountain or if the water current is too strong otherwise; water lilies use stomata on the top of their leaves for gas exchange and if water covers them, they will not be able to perform the necessary processes.

Water lilies anchor themselves into the substrate by digging their roots into the ground. However, water lilies do best in loam or clay-loam mixtures as most of the ingredients in typical potting soil is too buoyant to submerse and weigh down the plant.

Water lilies grow best if first planted in a large pot filled with loam/clay-loam. Fertilizer may be intermixed with this mixture as water lilies can be demanding feeders when it comes to nutrient uptake. Any dead leaves or other signs of decay should be removed before placing the plant in the center of the pot. A rocky top layer should then be used to cap off the mixture in order to prevent fish from kicking up the dirt and causing cloudy water.

This pot can then be submerged in the pond or any other prepared container.

Water lilies are relatively easy to care for, especially if planning on keeping the hardy types. Like any plant, water lilies will need to be pruned for decay as well as for overgrowth. Make sure to look for yellowing and torn lily pads and remove as needed; dying plants can lead to rot which can affect the whole pond or lake ecosystem!

It is also important to regularly trim your water lily collection; as mentioned before, some species of hardy water lilies have infiltrated local waterways and clogged drainage paths. If you let your water lilies get too out of hand, gas exchange and nutrient levels could start to be affected.

More than likely, your water lilies won’t need to be fertilized any more than the initial dosage that was used in the pot mixture. However, tropical water lilies and more designer species might need to be supplemented once in a while, especially if the system has a low bioload.

Hardy water lilies will most likely propagate on their own, but if you have a specific pond design you’re going for, you might want to have some control over where they spread; more desirable and tropical water lilies are also a popular choice to propagate as some can go for high prices. Depending on the species of water lily you have, you might have to propagate in a certain way.

Some species create plantlets at the center of their leaves which eventually grow into individual plants when the leaves start to die; this process is known as viviparous propagation. These plantlets may initially look like little bumps in the center of the leaf. Once identified, separate the leaf from the mother plant and allow it to float and naturally decay on its own. Once a root system has developed from the plantlet, these water lilies can be transferred to their own pots and desired locations.

Otherwise, water lilies use rhizomes to reproduce. These rhizomes can be carefully cut and replanted in a new pot to grow a completely new plant.

Otherwise, water lilies are great surface pond plants that can help take-up excess nutrients as well as to provide food and shelter for an assortment of wildlife.

If you have any questions about water lilies, other pond plants, or have had experience with these surface plant species, don’t hesitate to leave a comment below!