Pregnant Guppy – How You Can Take Care of Your Fish 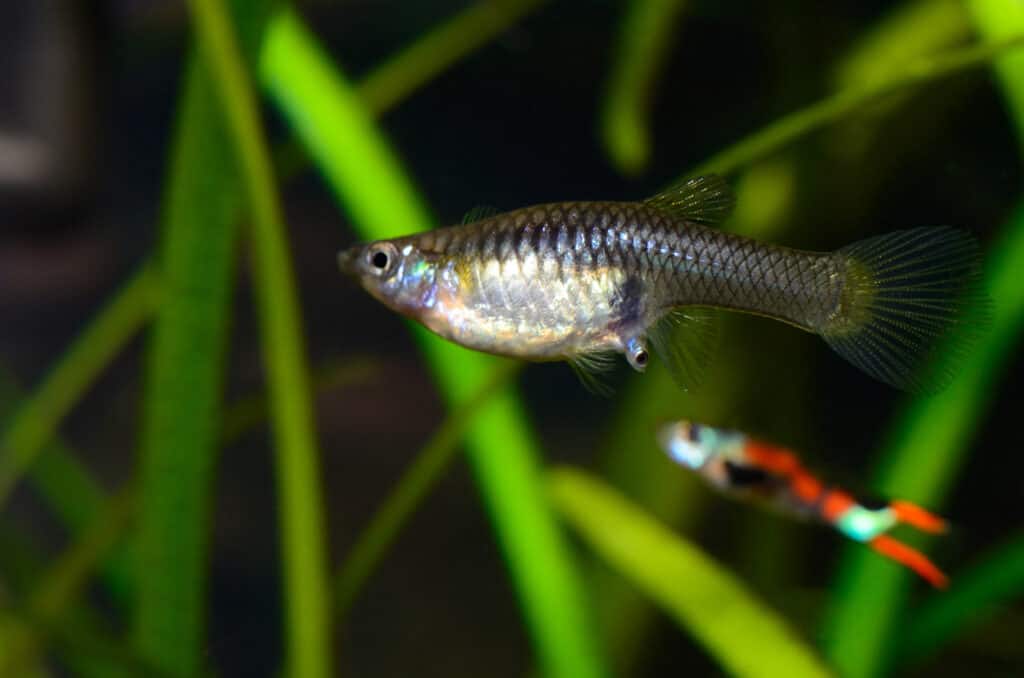 Guppies are sometimes known as the million fish. That’s because if you have male and female guppies, you’re soon going to have a lot more of them!

And, unlike the vast majority of fish which lay eggs, guppies are livebearers, meaning they give birth to live young.

If you think your female guppy might be about to become a mother, you’ll need to know how to confirm the pregnancy, and also how to look after her and her fry when they arrive.

So let’s find out how!

Our journey to guppy pregnancy begins at conception.

Guppies are livebearers, meaning they give birth to live young. Unlike some other fish where fertilization of eggs occurs in open water, guppy eggs are fertilized inside the female’s body.

But male guppies don’t have penises – instead, they have a modified fin that is used as a penetrating organ, called a gonopodium. Guppies will often mate several times in succession to ensure maximum fertilization.

Even so, female guppies can store sperm for up to a year, allowing them to become pregnant up to 8 times from a single mating!

That can explain why your female guppies could become pregnant in an all-female guppy tank, even months after you bought them!

How Do You Know If Your Female Guppy Is Pregnant?

After mating has occurred, you’ll want to find out if your female fish is indeed pregnant.

Changes in the Gravid Spot

Before pregnancy, the gravid patch is small and dark gray, but as pregnancy develops the dark spot will become larger, turning almost black towards the latter stages of pregnancy.

Unsurprisingly, females will also change in shape considerably as the pregnancy progresses. Their abdomen will swell, and after a few weeks, they may even appear ‘boxy’ or slightly square in shape.

A pregnant female guppy fish’s behavior can become more erratic and unpredictable as the pregnancy progresses.

While some guppies will become ravenously hungry during pregnancy, others will eat very little or stop feeding altogether. And feeding patterns may change considerably over the course of their pregnancy.

The same goes for their temperament. While some females will become very shy and hide among plants, others will become increasingly aggressive, chasing other fish around the aquarium.

Setting up a Guppy Breeding Tank

If you want to raise a new generation of guppies, you need to move the pregnant mother to a separate breeding tank to give birth.

Some aquarists prefer to do this as soon as they’ve determined that their guppy is pregnant, while others like to move the mother-to-be just before she gives birth.

Keep in mind that moving a fish to a new tank can be stressful for them, especially if there are any differences in the water conditions.

Be kind to the pregnant mother by making sure the birthing tank is well cycled, with a matching temperature and water parameters to your main aquarium. The ideal water temperature for gestation is 77-79 Fahrenheit.

Set up the tank with plenty of plants and hiding places for the mother to retreat to, and use a sponge filter to offer gentle filtration that won’t suck up the babies when they arrive.

Feed the pregnant mother a variety of nutritious foods like live or frozen brine shrimp, blood worms, and daphnia on a daily basis along with high-quality flake food and perhaps some occasional spirulina flakes.

The gestation period for guppies is 21 – 31 days. As this time approaches, look out for signs that your guppy might be about to deliver.

In the final stages of pregnancy, when a female guppy is about to deliver, she may arch her back and appear to be pushing. She may also breathe fast, with her gills constantly open, and have difficulty swimming normally.

She may also stay in the warmest part of the aquarium, even residing near the heater and not moving much. If this is the case, make sure your thermostat is set to the optimum 77-79°F.

When the big day has come, you’ll have a good chance of witnessing your guppy giving birth.

This is because birthing takes place over quite a long time – with 2-6 hours being normal, but longer birthing periods of up to 12 hours are also possible.

Occasionally, guppies will have a staggered delivery, giving birth to the first group of fry and then a second group a few days later. In many of these cases, some of the fry will sadly be stillborn or die soon after birth.

Caring for the Mother After Birth

After birthing, the mother should be removed from the tank to prevent her from eating her fry.

Although this may seem strange, the artificial environment of an aquarium may make your fish stressed or confused and cannibalize their own young. Just imagine, after all that work!

Because the mother guppy will be exhausted after months of pregnancy and birthing up to 200 young, some aquarists prefer to give her her own tank for a week or two to recover before being introduced into a community tank again.

Caring for the Fry

First of all, it’s important to remove any stillborn or weak, sinking guppy fry from the tank since their decaying bodies will quickly foul the water.

The baby guppies should be fed on newly hatched brine shrimp, ground-up flake food, or specially formulated commercial fry food. Frequent feeding of up to five times a day is recommended for the first four weeks while the fry are growing at their fastest.

As they grow up you can begin introducing larger live or frozen foods such as daphnia, mosquito larvae, tubifex worms, and bloodworms. A well-fed baby guppy is more likely to develop into a strong and handsome adult fish.

Use a sponge filter and make 25% partial water changes every week to keep the tank clean and the young guppies healthy.

Determine the Sex of Your Fry

Believe it or not, guppy fry can become sexually active and begin reproducing from the age of 6 weeks! Although 3-5 months is a more common time for the first pregnancy, it’s important to determine your fries’ gender early on so that they don’t start reproducing all over again.

Guppies develop their gender at around 4 weeks of age, so between then and the 6-week mark, you need to get busy finding out which are girls and which are boys and separate the two to prevent inbreeding.

Male and female guppies are most easily told apart by the Gravid spot which we discussed earlier. This is very small at first though, so you might need a magnifying glass to tell them apart.

For this task, some aquarists will catch each guppy one by one and examine them inside a polythene bag.

Move or Sell Your Fry

Guppy fry grow at a fast rate. When they’re born they’re only around a ¼ inch long, but within 6 months they’ll have reached their full size.

After around 6-8 weeks, your guppies should be at least an inch long and can be safely placed with other guppies or sold/given away.

Since guppies are such prolific breeders, it can be hard to find homes for them unless you have bred young with particularly fancy fins or a special coloration.

How Many Fry Does a Guppy Give Birth To?

Female guppies normally give birth to 30-60 young, but on rare occasions, the number could reach 200!

In a single lifetime, a female guppy could give birth to 2000 young. No wonder they call guppies the ‘million fish’!

Can Baby Guppies Survive in the Same Tank as the Mother or Other Fish?

Occasionally, yes. With regular broods of hundreds of young, there is a small chance that some of your baby guppies could survive in the tank with the adults.

A lot depends on how many hiding places they have! In a densely planted tank, they’ll have more chances of escaping the jaws of hungry fish.

What About Pregnant Endler’s Guppies?

Endler’s guppy or Endler’s livebearer (Poecilia wingei) are cousins of regular guppies, meaning they can even hybridize together.

Pregnancy in Endler’s guppies is similar to ordinary guppies except they tend to have much fewer young – with about 15 being the average.

What if My Guppy Is Pregnant From a Molly?

Believe it or not, mollies and guppies can have babies together. It’s not a good idea to keep female guppies with male mollies, since the large babies can be difficult for her to deliver.

If your female guppy has become pregnant with ‘gollies’, you’ll need to take extra special care of her using the steps above to help her get through the birthing process.

Where Can I Sell My Baby Guppies?

Guppies’ prolific breeding habits mean there’s never a shortage of them, so they’re not always the easiest fish to sell! Many local pet stores will take your guppies off your hands but are unlikely to give you money for an average guppy.

Fancy guppies and ‘show guppies’ for competitions on the other hand are highly sought after and can typically sell for anywhere between $25 – $100 for a pair.

A healthy mother typically gives birth to 30-60 young who need caring for in a separate tank if you want them to survive.

If you want to avoid your guppies having babies, you could consider having an all-male group of them. You can read my guide to keeping male-only groups of guppies here.