Can Male Guppies Live Together? Read On To Find Out! 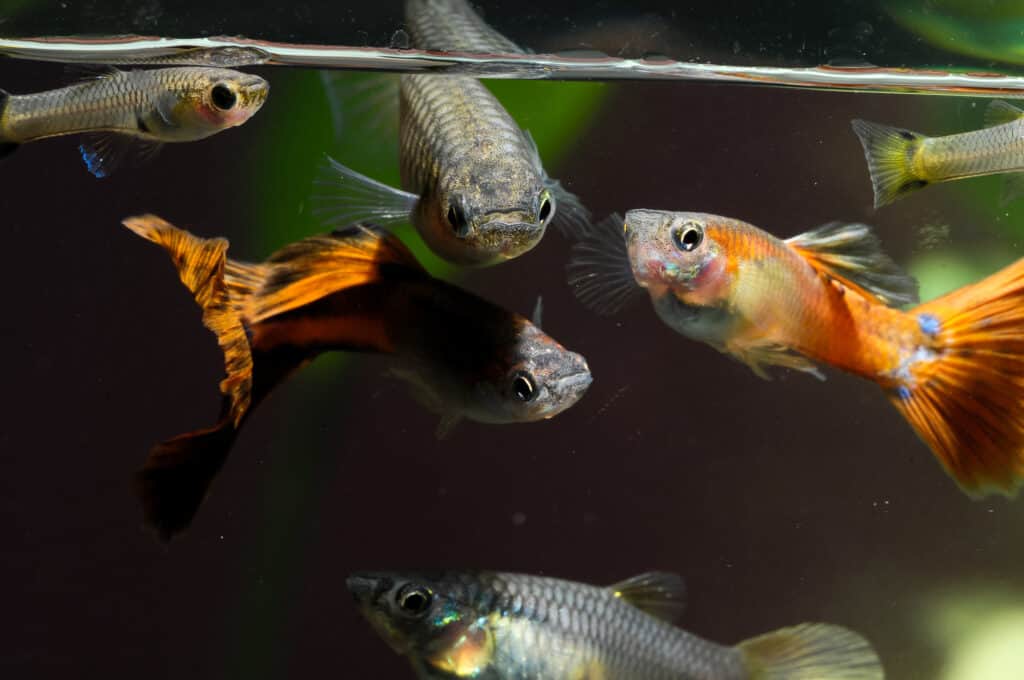 Guppies are classic community tank fish that are often recommended for beginners. Their long fins and diverse colors have made them one of the most popular of all aquarium fish for decades.

But can you keep a group of guppies that are only male?

The answer is yes, you can. But there are some potential problems that you’ll need to know how to work around too.

Let’s take a deeper look together into the mysterious world of male guppies!

The Advantages of A Male-only Guppy Tank

There are a couple of good reasons why you might be thinking about having an all-male guppy tank. Male guppies are more colorful and tend to have longer fins than females, so are often preferred from a purely aesthetic perspective.

But there are also practical reasons for keeping only males. Guppies are livebearers, meaning they give birth to live young. And when they breed, they can do so at a prolific rate.

A female guppy can give birth to up to 200 fries in one brood, and perhaps what’s more amazing, she can repeat this feat, again and again, every 30 days!

If you do the math, you’ll see that your guppy population could get rather big, rather quickly if you allow them to breed. Keeping only males in a single tank is one surefire way to prevent overpopulation!

But, Is it OK to Have Only Male Guppies In One Tank?

While it’s certainly possible to keep only male guppies in a single tank, there are some potential problems with it too. Guppies are usually regarded as a peaceful fish species, but males can get quite territorial towards one another, especially when there are no females around.

Aggression between males can lead to complications such as your fish becoming stressed, wounded, and even dying as a consequence of bullying or fighting.

This means you’ll have to find some ways to reduce aggression between your male guppies.,

How To Reduce Aggression Between Male Guppies

There are several ways you can reduce the likelihood of dangerous levels of aggression between your guppies. Here are some of the best ones.

Keep Male Guppies in A Group of Six or More

One of the most important steps you can take to ensure a trouble-free school of male guppies is to keep them in a large enough group. If you ever had a bully in your class at school, you’ll know it’s a relief when they’re picking on someone else other than you. Well, it’s not so different with guppies!

A larger number of guppies means that aggressive behavior gets more dispersed, and each individual can enjoy relatively long periods of peace between potential conflicts.

For this reason, we’d recommend you never keep guppies in groups of less than 6 to ensure that aggression is dispersed, and none of your fish suffer bullying excessively.

Get a Large Enough Tank For Your Guppies

Now that you’ve got your six guppies in mind, you’ll need a large enough tank to accommodate them. While some people have tried cramming 6 guppies into a 10-gallon tank, we certainly wouldn’t recommend this tank size for an all-male group of them.

If your guppies are kept in too close a proximity, they will have much more reason to constantly bicker, which could lead to some individuals becoming stressed, injured, or dying.

Therefore for an all-male group of 6 guppies, we’d recommend at least a 20-gallon tank, perhaps with some other peaceful community tank mates like tetras, rasboras, and corydoras catfish in the mix to keep things interesting. A few other fish species will also provide some welcome distraction for your guppies!

Provide Hiding Places For Your Guppies

If you’ve been keeping fish for a while, you’ll know how much they enjoy hiding away among live plants or inside rocky caves when they’re feeling vulnerable. Guppies are no different, and they’ll really appreciate being given enough hiding places to retreat away from potentially dangerous conflicts.

Use rocks and pieces of driftwood to create some sheltered places for your guppies to rest.

Having some tall plants in the tank also divides up the space and gives your fish a chance to stake out their own territories. Blue Water Hyssop, Hornwort, and Amazon Sword are some good examples of taller aquarium plants.

Keep Guppies of A Similar Size

Like most other animals, it tends to be the smallest guppy who will receive the brunt of the aggressive behavior in a group. If your guppies are not well-matched for size, then the larger ones will likely take advantage of their superior size and bully the smaller specimens.

When you’re buying your guppies, try to choose males that are of a similar size to prevent disparity issues.

You’ve probably had a few times in your life when you were so hungry that the tiniest annoyance would be enough to make you go bananas. Your fish are not much different in this way, and a hungry fish can easily become a grumpy fish.

To prevent your guppies from exhibiting irritable behavior such as nipping each other’s fins, it’s a good idea to keep them well-fed.

By this, we don’t mean feeding them an excessive amount of food. Overeating is actually a bigger killer in guppies than aggression! But we do suggest a consistent feeding regime of high-quality and varied foods.

Can I Keep A Male Guppy On His Own?

Keeping a male guppy on his own is not a good idea. Although guppies can’t be described as schooling fish in the same way that neon tetra or zebra danios can, they do enjoy each other’s company.

Yes, the fighting between them may seem a funny way to show their affection for one another, but if you keep a male guppy on his own he is likely to feel lonely and may suffer from a host of issues associated with stress and a weakened immune system.

Can I Keep 2 Male Guppies Together?

It’s definitely not a good idea to keep just two male guppies together without any females! As we’ve talked about above, male guppies need to be kept in a large enough group to disperse aggression and ensure that no one individual is targeted excessively.

If you tried to keep two male guppies together in the same tank without females, chances are that the stronger one would bully the weaker fish so much that the smaller one would eventually die from stress or wounds inflicted.

Groups of 3, 4, or 5 guppies are also unsuitable for the same reason, and to avoid problems we’d recommend a group of 6 guppies as the absolute minimum.

Will Male Guppies Kill Each Other?

While it would be a sad event, male guppies are more than capable of killing one another in certain circumstances.

If there are not enough guppies in the tank, their sizes are mismatched or there are inadequate hiding places, your weakest guppies are likely to succumb to repeated attacks from the others and may eventually die from stress, shock, or injuries.

Also, if your guppy’s fins are left ragged after fighting, keep a close eye on them to make sure they don’t develop fin rot. Fin rot is a common disease in guppies and can spread to the rest of the body, becoming fatal if left untreated.

If you’ve tried everything we’ve suggested in this guide and your male guppies are still fighting too much with one another, there are a couple of solutions to try as a last resort.

As with humans, each fish has its own character. Some guppies will simply be more aggressive than others, and if you have one particularly troublesome individual, it might be best to remove him from the tank.

It’s not necessarily a sad outcome for your fish though. Your aggressive guppy might just have an especially strong drive to reproduce and is getting frustrated by the lack of mating opportunities.

Give him to a friend or a pet store who are likely to have female guppies in the tank, and there’s a good chance that your delinquent will prove himself to be an amicable tank mate in a different setup!

If you’ve tried an all-male guppy tank and it’s not working out for you, you could always go back to square one and introduce some females to the tank.

Females reduce aggression among male guppies by offering them an all-consuming distraction: the chance to mate!

In a mixed tank, male guppies will often spend night and day trying to win the charms of a female and are much less likely to waste their time bickering with one another.

The Golden Ratio of Male to Female Guppies

If you’re thinking of keeping male and female guppies in a single tank, it’s important to understand some principles of mixing them together.

Just as with other males, male guppies can get quite feisty when pursuing females, especially if there are not enough of them for each male.

If you introduce just a couple of females to your school of male guppies, the males will quickly go into a mating frenzy and overwhelm your girls. This could easily lead to the same, undesirable outcomes as keeping only males together.

If you’d like to keep a mixed tank of guppies, then it’s best to provide two or three females to every male.

This golden ratio provides the most peaceful solution and one that many guppy keepers try to keep to. Just remember you’ll need to think about what to do with all of the young guppies that will inevitably be born not long after mixing them together!

Keeping an all-male tank of guppies has its advantages. Males are more flamboyant in their appearance, and keeping only boys overcomes the problem of over-breeding.

But to keep only males in a single aquarium, you’ll need to find ways to reduce aggression among them to make it work.

We hope that some of our suggestions above can help you to keep male guppies together successfully! To learn more about the colorful world of guppies, check out our guide to keeping them here!