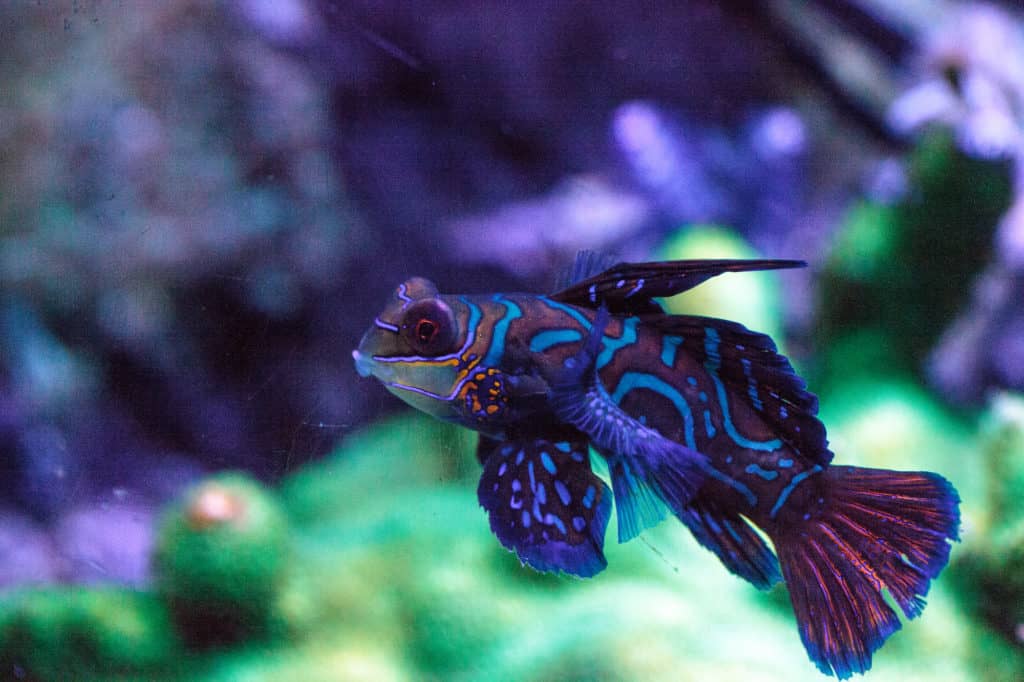 The Mandarin goby is an absolutely stunning, tropical saltwater fish that deserves pride of place in any marine aquarium setting. However, one of these beauties is not suitable for a beginner, as the fish can be difficult to keep in captivity, largely because of their dietary challenges.

In this article, we provide you with all the information that you need to decide whether a Mandarin goby would be a suitable addition to your marine tank.

The Mandarin goby is known by several names, including:

These are small, brightly-colored members of the dragonet family of fishes, all of which are favorites with the marine tank enthusiast fraternity.

Mandarin fishes are found in the Western Pacific Ocean, ranging from the Ryukyu Islands down to the warmer waters of southern Australia. The fish are readily available in the trade and make a dazzling addition to any reef or marine setup.

In the wild, the Mandarin Dragonet inhabits inshore coral reefs and shallow lagoons.

The Mandarin goby’s appearance is the main reason that so many people want to keep them.

The fish has the same body shape as a regular goby, but that’s where the similarity ends.

An adult specimen rarely grows larger than three 3 inches length. The fish has two large pelvic fins that it uses to “walk” across the floor. The pectoral fins are located more centrally to the goby’s body and are almost transparent. Like most gobies, the Mandarin fish has large, protuberant eyes that are red with large, black pupils. The fish has no scales, but it can secrete a toxic mucus, which it uses to deter predators.

There are several variations of the Mandarin goby. The striped Mandarin dragonet has orange and blue, wavy stripes that run horizontally along the fish’s body. The fins are similar in color, but here the orange shades may fade into yellows. The fish’s head is green or blue, and it has bold blue stripes.

Another variation of the Mandarin goby has red and green coloration instead of orange. There are also spotted Mandarinfish that have dark blue spots surrounded by yellow lines, rather than stripes, and the fish’s body is a pale yellow-green.

The coloration is just as spectacular on both sexes, but you’ll need to be able to sort the boys from the girls if you want to have a crack at breeding these beautiful fish. It’s relatively easy to differentiate between the sexes. Males have longer dorsal fins that are pointed, and females are generally slightly smaller.

Care of the Mandarin fish

The primary reason that these spectacularly colored fish are reputedly difficult to care for is largely due to their fussy feeding habits. Otherwise, the goby Mandarin is straightforward to care for.

For a single specimen, you’ll need a 30-gallon tank. That’s largely due to the fish’s diet, rather than their size. Basically, if you can’t fit a sufficient amount of live rock in the habitat, the goby will not have enough food.

Gobies cannot be kept in groups, as males are territorial and they will fight. Each mated pair of Mandarin gobies needs plenty of room for their individual feeding and spacial requirements. That means you’ll need a tank of at least 60 gallons if you want to keep a pair.

The Green Mandarin is most comfortable and happy in a reef habitat that has live sand across the bottom of the tank. Like most goby species, these creatures love to bury themselves in the substrate, so you’ll need to provide a layer that’s thick enough to accommodate that behavior. The fish will become stressed if they can’t burrow down into the sand to hide, especially if you have a community tank.

As well as live sand, you must include lots of live rock and coral that creates a landscape of hiding places where the Mandarin Dragonet can take shelter.

Live rock is also an essential food source for the goby, and you will need at least 75 pounds of live rock for one Dragonet. If you don’t provide enough live rock, the fish will eat all the copepods on the rock. For that reason, it’s not recommended to add a Mandarin Dragonet to a new setup where there’s no established food supply, or your fish could starve.

The Mandarin goby is a tropical fish that needs a water temperature of between 75o and 81o Fahrenheit.

The fish will be happy with standard LED lighting, but it prefers a slow-moving flow, so you won’t need an additional water pump. Be sure to carry out water changes each week to keep the level of pollutants in the water as low as possible.

Synchiropus splendidus are carnivorous fish, and that means you’re very limited as to what you can feed them. In nature, the fish feed on a variety of small creatures, including worms, fish eggs, small snails, and copepods.

The fish feed throughout the day, grazing on whatever morsels they find on the substrate or on surfaces within the tank.

The goby’s preferred food is copepods. That’s what the fish eat in their natural environment and is just about the only food they will readily consume in the tank. For that reason, you must include plenty of live rock in your reef aquarium, as it will sustain a large population of copepods that your goby can eat. A 70-gallon, well-established tank will provide sufficient copepods to sustain one Green Mandarin without the need for additional supplementation.

Live brine shrimp are also well-received, and they can make a useful go-to food if you don’t have sufficient live rock to sustain your goby. Frozen Mysis shrimp are also valuable nutritional food. However, wild-caught Green Mandarins will not take frozen food, and you will need to wean them onto it. To do that, offer the fish live foods, and gradually introduce defrosted frozen shrimp into the diet.

The Mandarin goby is a peaceful soul when it comes to mixing with other species. Any aggression shown by these fish is usually directed toward males of their own species.

Tankmates should be of a similar size so that there’s no competition for food. Dragonets are very mild-mannered, and they won’t join in a scrum at feeding time, leaving them potentially hungry if their companions are too competitive. Ideally, you should choose fish who are peaceable, such as seahorses or those who eat a different diet.

Suitable tankmates for the Green Mandarin include:

Live anemones don’t mix well with the Mandarin Dragonet, as these little creatures spend much of their time around the bottom of the tank, and a large anemone could easily consume the fish. Invertebrates, including shrimp and snails, are both safe to keep with Dragonets and make good tankmates.

Another big no-no is keeping two male specimens together. These fish will scrap over territory, females, and food, leading to stress, injury, and disease outbreaks.

Although it can be done, breeding Mandarin gobies in captivity is not easy.

First of all, you will need to establish a mated pair. That’s not straightforward, as simply putting a male and female fish together doesn’t mean that the couple will automatically hit it off. Unfortunately, the trial and error method of mating pairs doesn’t work either, since you can only keep one pair in your tank at a time. So, the easiest way to go about things is by purchasing an established pair that has already bred previously.

If the conditions in the tank are suitable, as described earlier in this guide, and the couple is properly fed, spawning should occur naturally.

The Mandarin fish usually spawns at night. The pair meets above the reef to release their eggs and sperm, and the fertilized eggs float to the surface.

Each spawning sees up to 200 eggs released, which hatch within just 12 hours. Three weeks later, the juvenile gobies will show the same spectacular, gaudy colors of their parents. Mandarin fish are prolific breeders, spawning every week for several months while the water conditions are right.

Unless you have a species-specific setup, it’s best to set up a separate breeding tank so that the young gobies don’t become lunch for other fish.

The Green Mandarin is a very hardy species that is extremely resistant to diseases, including parasites. That said, these fish can be susceptible to the more common marine fish illnesses, especially if their diet is unsuitable or if they become stressed.

Stress lowers the fish’s immune system, leaving them more vulnerable to attack by parasites and diseases.

Signs that all may not be well with your goby include darting, flicking against objects within the tank and the substrate, discoloration, rapid respiration, and poor appetite.

If you have concerns about your Green Mandarin’s health, start by carrying out a partial water change and check that the quality of the water and the temperature are within the parameters that the fish will tolerate. In the case of this particular species, diet is usually at the root of any health problems. So, try to ensure that your fish is eating enough by introducing more live rock to your reef aquarium. Also, feeding your goby more live food, such as brine shrimp, may be effective.

Wild Mandarin fish have a general life expectancy of 15 years. However, even a healthy specimen in a captive environment has a lifespan of just five years.

Synchiropus splendidus is available through the trade worldwide, and, thanks to its popularity, is generally easy to find. However, if your local marine store doesn’t have one in stock, you can generally find them online.

The price of specimens varies, depending on the size and colors of the individual, but you should generally expect to pay up to around $90 for a captive-bred fish. Don’t forget that if you buy online, you can’t see the fish until it arrives, and you will have to pay shipping costs too unless you can find a dealer who offers free shipping.

Where possible, try to buy a captive-bred Mandarin fish. Fish that are tank-bred are trained to eat a diet of frozen and live foods, and that goes a long way toward avoiding the problems with feeding that you may encounter with wild specimens.

The Mandarin goby is a beautiful, brightly colored saltwater species whose stunning appearance and small size make it a popular choice for marine and reef enthusiasts around the world.

Although the species is not the easiest to care for, these captivating creatures will thrive if they get the correct diet, and the particular kind of food that they need is plentiful. These are hardy fish that are very resistant to disease and will tolerate minor changes in water conditions too. These gobies are peaceable and generally get along fine with suitable tankmates provided that they are of a similar size and get enough to eat.

So, if you have an established reef tank with plenty of live rock and sand, one of these gorgeous little Dragonets could be the fish you’re looking for.