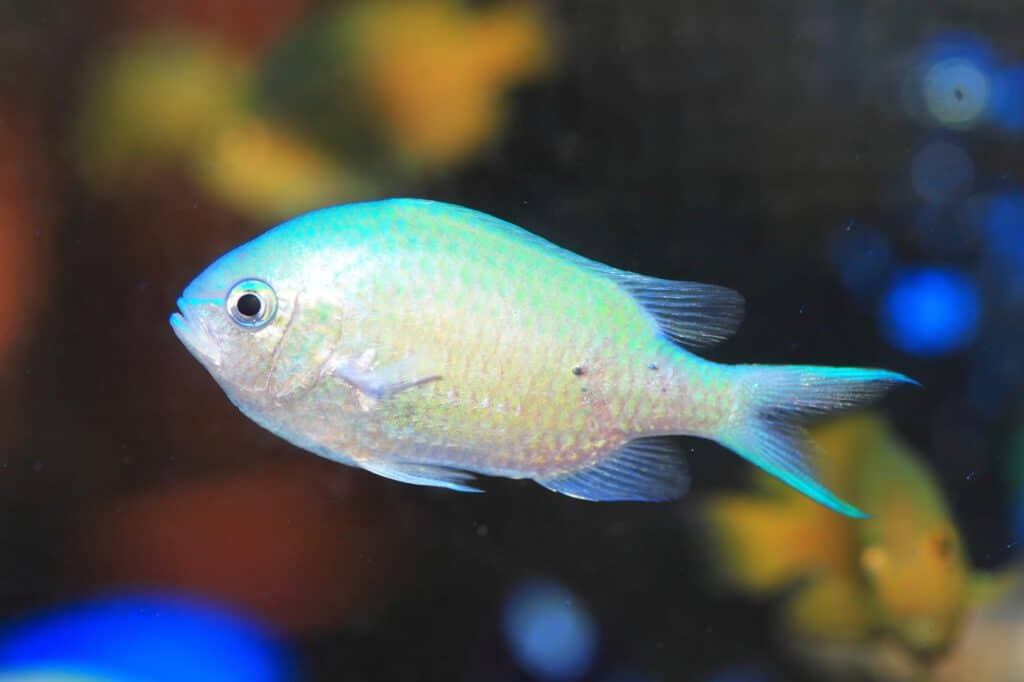 The green, or blue-green, chromis is a popular choice for the reef or marine tank. Chromis Viridis is a species of damselfish that is both beautiful and peaceful, as well as being hardy and active. These fish are relatively inexpensive and widely available, too, making them a good choice for newbies and experienced hobbyists alike.

To find out how to care for the green chromis, check out this comprehensive guide!

The green chromis was first described in 1830 by Cuvier.

These fish are found in the Indo-Pacific, specifically the Line Islands, the Red Sea, Tuamoto Islands, Marquesan Islands, and then north to the Ryuku Islands and southward to New Caledonia and the Great Barrier Reef. The species is abundant and doesn’t currently appear on the IUCN Red List of threatened species.

The fish belong to the large Pomacentridae family of anemonefish and damselfish and are known by several common names, including:

There are thought to be over 100 species in the genus, although few are collected for the trade.

Green chromis are schooling fish, living in shoals hundreds strong, and gravitating to sub-tidal lagoons and reef flats where the water is relatively shallow at five to 39 feet. The fish gather above species of branching corals, such as Acropora, where they take shelter and rest at night.

What do green chromis eat?

Blue-green chromis are exceptionally beautiful fish with compact, deep, slender bodies and deeply forked tail fins. Their physiological makeup enables the fish to swim quickly and efficiently to escape predators and maintain their place in the shoal.

How big do green chromis get?

These fish can grow to around 3 1/2 inches in length, with males and females reaching around the same size.

Wild specimens live for between three and eight years, but those in captivity have a longer lifespan of between eight and 15 years.

Blue-green chromis range in color from a bluish-green to intense green, depending on the light you use, and have a silver-white patch under their eyes.

Males in breeding condition morph to a yellow or greenish-yellow shade.

Are green chromis easy to keep?

This species is one of the easiest marine fish to care for, being moderately hardy and perfect for newbies to the hobby, as long as good water quality is maintained.

Green chromis are pretty peaceful, and you can keep them alone or in a group of six or more individuals. These fish are also suitable for life in a community tank with other peaceful species. Avoid mixing semi-aggressive types with these docile damselfish, as that can lead to bullying. Fish that are harassed and bullied will become sick, which can lead to problems with your setup’s overall health.

How to care for green chromis

Now that you know more about the beautiful green chromis and their suitability for life in your aquarium, let’s take a closer look at caring for them.

Green chromis can live in a mini-reef or marine setup.

These fish do need plenty of swimming space. A minimum tank size of 30 gallons is also recommended. If you want to keep a school of six fish, you’ll need to provide a 55-gallon tank at least. A shoal of at least six individuals is best, as less than that can lead to bullying and aggression as the fish try to establish a pecking order.

If you have a marine or reef tank, use rockwork and branching corals to offer hiding places for the chromis.

Green chromis tend to hang out in the upper parts of the water column where there is plenty of open swimming space, so you must ensure that the area is not cluttered with decorations, or the fish won’t have enough space to swim freely.

Sandy substrate and regular reef lighting are fine for these fish, and a small amount of algae can be welcome for the chromis to graze on.

You will need to spend time maintaining the green chromis’ tank if your fish are to remain in good health and thrive and carry out bi-weekly water changes to replace essential trace elements used by the corals and fish.

In nature, blue-green chromis are omnivorous, feeding on plankton and certain species of floating and filamentous algae during the summer months.

You should give your fish a varied diet that consists mainly of meaty foods, including enriched brine shrimp, mysis shrimp, finely diced fish or shrimp, and herbivore flakes. You can also feed pellets, but you need to soak them first so that you don’t introduce air into the fish’s digestive tract, which can cause problems.

How often should you feed your green chromis?

We recommend feeding your green chromis several times daily if possible. Like most planktivores, wild chromis constantly graze, and it’s important to replicate that if possible in captive fish.

If you’re not around to feed your fish during the day, an automatic fish feeder is a worthy investment for your tank.

Unlike other species of damselfish, the blue-green chromis is the exception to the rule in that these fish are relatively peaceful. That means you can keep the green chromis with most other amenable community fish.

Can you keep green chromis together?

Green chromis should be kept in a shoal of six or more. If you only plan on keeping a single specimen, don’t include semi-aggressive or boisterous fish that share the same dietary requirements in the tank, or your chromis will probably be bullied.

A large school of these fish makes a really impressive addition to a large tank, as blue-green chromis make a wonderful display of sparkling color close to the top of the water column. However, these fish form a hierarchy when kept in captivity, and it’s known that if small numbers are kept, weaker, smaller fish will be picked on by larger ones. That behavior causes stress and, eventually, death.

These fish get along well with semi-aggressive species such as the more peaceful species of tangs. However, they don’t mix well with aggressive pygmy angelfish or anthias. Niger triggerfishes are pretty chilled out and can work well with blue-green chromis. However, a more aggressive triggerfish will chase the green chromis and should be avoided. Gobies, assessors, fairy wrasses, and dartfish are all safe tank mates for chromis.

Green chromis are considered to be reef-safe, and they don’t bother with LPS or SPS corals, enjoying the safety and shelter provided by the branches of any SPS coral species. Also, the fish’s gentle fin movements among the coral branches can help prevent and remove detritus from accumulating, helping to keep the corals healthy.

Although chromis won’t be a threat to invertebrates, including anemones, adult amphipods, and copepods, the fish will eat these creatures’ floating larvae, as well as planktonic invertebrates that result from spawns within a healthy reef tank.

Shrimp, snails, starfish, and crabs will not be bothered by the blue-green chromis. Flatworms, bristle worms, feather dusters, scallops, and clams, and oysters are also safe.

Green chromis can pose a threat to pipefish, mandarins, and seahorses unless kept in a very large tank with plenty of places where these vulnerable creatures can take shelter.

Although blue-green chromis have been bred in captivity by some hobbyists, breeding these fish is not easy.

Interestingly, all green chromis are born female, with some specimens becoming male as they mature. It’s believed that the phenomenon occurs depending on the ratio of male to female fish in a shoal to ensure that suitable breeding numbers are always available.

These fish are egg-layers, typically spawning every two weeks. If you do intend to try breeding these fish, you should be aware that crabs, wrasses, brittle stars, and serpent stars will eat damselfish eggs.

To encourage spawning, you need to provide perfect water conditions and a very large aquarium that’s free from predatory species.

The water temperature should be between 79 and 83 degrees Fahrenheit. The fish scatter their eggs over a nesting site or “algae mat” that consists of rubble, sand, or perhaps a scrap of sponge.

The male fish establishes his territory on the seabed, underneath or adjacent to the school of green chromis. He will choose a female from the group and swim around her. Once the female is in breeding condition, she will accompany the male to his chosen spawning site. The female lays her eggs in the male’s nest, and he fertilizes them.

The male will continue returning to the shoal and choosing female partners until his nest is full. The male then guards the nest until the eggs hatch, fanning the nest and eating any eggs that go bad so that they don’t damage the remainder of the clutch.

The eggs usually hatch after two to three days, and the larval stage of the fish lasts for between 17 and 47 days. Raising the fry is difficult, largely due to its tiny size.

The green chromis is one of the more delicate species of damselfish, and they don’t fare well if not handled correctly.

These fish are very sensitive to water conditions, so you need to monitor the water parameters and test your aquarium weekly to make sure that ammonia, nitrite, and nitrate levels are within acceptable limits. However, thanks to their extreme sensitivity, the green chromis can be something of a “canary in a coal mine” when it comes to highlighting problems with water quality in a tank. So, if your chromis are not thriving, it pays to check the quality of your water.

Blue-green chromis will also become sick and diseased if other fish harass them or are kept in a too-small shoal. In a nutshell, to keep your chromis healthy, you must maintain your tank properly and keep the fish with proper tank mates.

All damselfish are susceptible to marine ich, which is also commonly known as white spot disease or crypt. The protozoan parasite, Cryptocaryon irritans, causes the condition.

Affected fish flick against objects within the tank in response to the skin irritation that the parasites cause. As the parasite’s life cycle progresses, the fish develop a rash of tiny white spots across their fins, gills, and body.

Marine ich is relatively easy to treat by dosing the water with an over-the-counter ich medication.

Uronema is caused by the parasite Uronema marinum and is usually a secondary infection. This is a particularly nasty disease that is often deadly. Affected fish generally show a lack of appetite once the disease has taken hold.

The disease is usually contracted when the tank salinity is too low, usually around 1.013 to 1.020, as the parasite responsible for the problem thrives in these conditions.

Although most common fish diseases are treatable, it’s best to prevent problems from occurring in the first place.

Make sure that you quarantine or thoroughly clean anything that you add to your tank. That includes corals, fish, and live rock.

Blue-green chromis are usually readily available from good fish stores and online and are reasonably priced, depending on where you buy your fish.

The blue-green chromis is a beautiful, shoaling fish that can make a nice addition to a peaceful, saltwater fish-only or reef tank.

These small fish are relatively inexpensive to buy compared to some of the more expensive marines, and their bright colors give you plenty of bang for your buck. The main drawback to the green chromis is that these fish can be highly sensitive to poor water conditions, so you will need to be on your A-game when it comes to tank maintenance if your fish is to thrive.