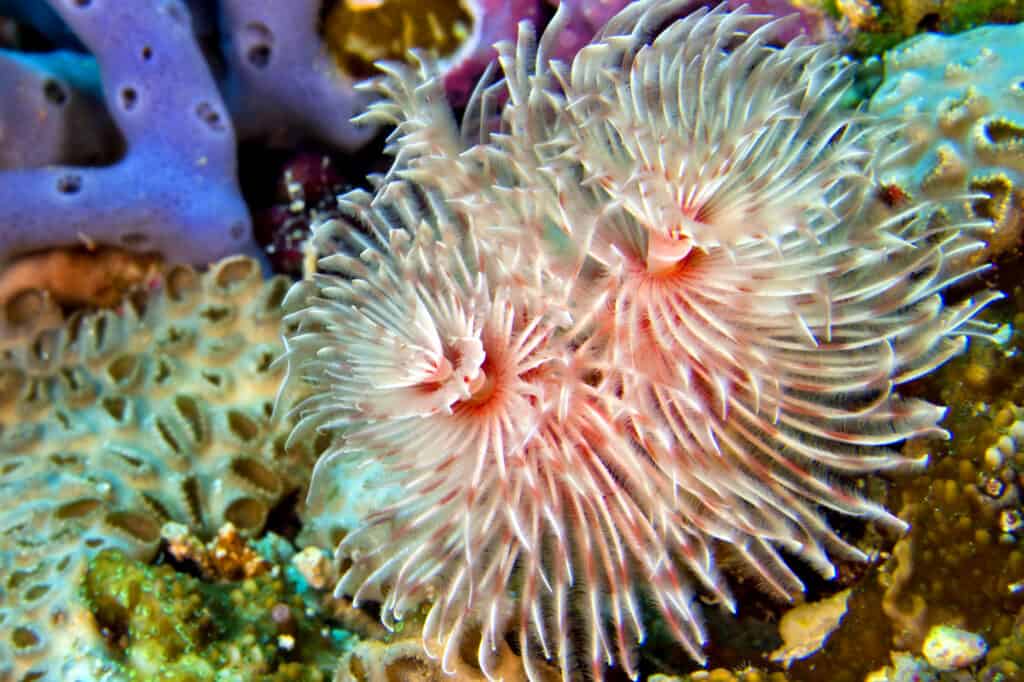 If you have a mature marine aquarium and you’re looking for something different to add to your collection, feather duster worms are a fantastic option.

These are delicate-looking creatures that can create a beautifully textured contrast against soft anemones and hard corals.

These fascinating invertebrates are not challenging to keep, as long as you provide them with their preferred water conditions, tank mates, and nutritional requirements.

Read this guide to learn more about feather duster worms and how to care for them.

What Is A Feather Duster Worm?

Feather duster worms are a distant cousin of the garden earthworm, belonging to the annelid phylum, including most other segmented worms species.

Creatures such as bristleworms, leeches, and tubifex worms are also species of annelids, and if you look at them closely, you’ll see that they all have similar segmented bodies.

Feather duster worms spend most of their lives hidden inside their tubular bodies, waiting for particles of food to drift past them on the current. These creatures are filter-feeders.

The worms extend their feathery radioles, which also act as gills, to catch floating food particles, such as plankton or bacteria as they waft past.

The worms then sift through the catch, extract the most nutritious pieces, and then discard the remainder. Each radiole is coated in cilia, which are microscopic hairs that move the food through the mucus on the worm’s radioles into its mouth.

Moving Outside Of Their Tubes

Although feather duster worms spend most of their lives hidden inside their tubes, they can leave them if necessary. For example, when the worm is attacked, stressed, or needs to find a more suitable spot it will venture outside of its tube.

However, once outside the protective tube, the worm is fair game for any predator that’s looking for a meal.

The worms are eyeless and have no face, but they are still highly sensitive to motion, light, and water movement. If anything passes too close to the worm’s radioles, the creature retracts them instantly.

Some species of feather duster worms also have a hard lid or operculum that blocks the tube’s entrance for additional protection.

There are two primary species of feather duster worms that you’ll find in marine aquariums.

Sabellid worms create tubes from mud, sand, and general rubble, using the mucus they secrete as a kind of glue.

A sabellid worm can build a new tube in as little as a few hours. Since these worms can construct a new home relatively quickly, they tend to abandon their tubes more often than other kinds of feather duster worms.

You might even find that your sabellid worm has left its tube in transit to your home from the fish store!

Many hobbyists think that their new purchase has died in transit. However, if you place the worm on the bottom of your aquarium or in a dish containing tank water and sand, the worm will quickly begin building a new tube.

You can usually find these worms buried in hard surfaces, such as coral or live rock, where they secrete acids to secure themselves into their new homes. These worms tend to grow along with their host corals and feed on the coral’s mucus.

Keep reading to learn more about how to care for these amazing creatures and their ideal tank conditions to thrive.

Since feather duster worms can’t swim in your tank, you can keep them in any tank size.

Your feather duster worms will get along fine in any size of a tank, as long as they have sufficient space to spread their radioles and feed efficiently. In a small tank, the worms find feeding pretty easy, but they do tend to consume all the microorganisms much more quickly than in a larger setup.

For that reason, we recommend that you keep your feather duster worms in a medium-to-large tank where there’s plenty of food and lots of space for the worms to show off their beauty.

So, your water must contain zero or very close to zero levels of ammonia, nitrite, and nitrates. This makes feeding the worms somewhat complicated since they require a constant supply of particulates suspended in the water column.

Much of this food won’t be eaten, so it tends to decompose gradually to create poor water quality in your tank. However, you can solve this problem by including other filter feeders, such as sponges, corals, and crinoids in your aquarium.

To help keep the water pristine, you should run a refugium or protein skimmer in your aquarium. If you don’t keep the water clean, uneaten food will decay to create ammonia, release phosphorus, and cause algae spikes in your tank.

If the water quality is not stable and the parameters fluctuate, your worm might shed its radioles or leave its tube.

That doesn’t necessarily mean your worm has died. These remarkable animals simply grow a feathery crown of new radioles in just a couple of weeks, so wait to see if your worm recovers.

In common with all vertebrate species, feather duster worms are highly sensitive to dissolved drugs and fish treatments containing copper or copper compounds.

For this reason, we recommend that you treat any sick livestock in a separate quarantine setup if you have a reef tank.

The feather duster worm is a filter feeder that uses its waving radioles to extract tiny particles of food from the water column.

The worms even have grooves within the tiny cilia that enable them to sort their food by its size, making the creatures very choosy feeders! For example, large items, such as grains of sand, will be discarded, whereas small particles, such as rotifers, phytoplankton, bacteria, and zooplankton will fit through the cilia grooves onward to the worm’s mouth.

Feather duster worms prefer microscopic living food, so they are happiest in mature fish tanks where populations of microorganisms are already healthy.

Of course, you can choose to feed your worm with infusoria culture. Infusoria contains single-celled organisms, including amoeba and paramecium, that live in the water. If you’re using that method of feeding your worms, give them a light dusting with infusoria once a week.

If you have large species of worms, such as giant feather dusters, you can try feeding them with brine shrimp nauplii and finely crushed flake. However, most smaller species prefer microorganisms.

You can also offer your worms green water algae, rotifer cultures, and bottled zooplankton and phytoplankton that you can purchase from fish stores.

If you keep your feather duster worms in a species-only setup or a marine tank without corals, you can flood the water column with food. Live plankton can survive for many days, providing a constant stream of food for the worms.

You might need to target-feed your feather dusters a couple of times per week in a reef tank, using a syringe or pipette. Wait until the worm extends its radioles, and then you can slowly release the food above the worm.

If the current is too strong, the worm might retract its radioles. Aim for a gentle-to-moderate water flow and release the food upstream so that it’s carried on the current to the worm’s feathery crown.

In addition, sponges, anemones, corals, and other sessile invertebrates make excellent tank mates for feather duster worms. However, keep in mind the feeding habits of the worms, as uneaten floating food particles can make it tricky to keep the water parameters suitable for some sensitive coral species.

Invertebrates generally make safe tank mates for feather duster worms, as long as they are deemed to be reef-safe.

Unfortunately, many of the most popular species of marine fish do not make suitable tank mates for feather duster worms.

This includes most species of grazing fish and predatory species that target invertebrates, such as triggerfish, pufferfish, wrasses, hawkfish, butterflyfish, and angelfish.

Medium to large-sized crab species is best avoided as they can be aggressive and opportunistic feeders that can attack feather dusters. Crabs use their sharp claws to nip off the duster’s extended radioles, and some can even break into their tube, especially if you have soft-tubed varieties, such as giant feather dusters.

Starfish are also known to predate on feather dusters so it’s best to avoid them.

Can Feather Duster Worms Live Together?

You can keep colonies of feather duster worms.

Some species, such as the social feather duster or feather duster worms, Bispira brunnea, will actively form groups with no human intervention needed.

Since feather duster worms have a relatively short lifespan of just a couple of years, it’s good to know that you can easily breed these marine invertebrates.

Unfortunately, most marine tank owners miss the happy event as spawning usually takes place at night. Also, most filters are efficient at screening out the gametes from the water column before they have a chance to become established.

Within a few days, the eggs hatch, releasing larvae that feed on other kinds of planktonic organisms. The juvenile worms fall onto the substrate, where they form their radioles and tubes, appearing as tiny adult worms.

The worm sheds a small portion of its body in a process known as scissiparity, the segment forming a completely new worm that constructs a tube and produces radioles. The new worm is then an exact genetic clone of its parent.

Did you enjoy our guide to keeping and breeding feather duster worms? If you found the information helpful, please take a moment to share this article.

Feather duster worms can make an interesting and beautiful addition to your collection if you have a marine or reef tank. These fascinating creatures are filter feeders, hiding in their tubes until a cloud of tiny particulate food drifts past on the current.

These animals are not suitable for a brand-new tank setup, as a new tank won’t contain enough food for them. However, if you have an established marine tank of any size, a small colony of feather duster worms could be the perfect addition.