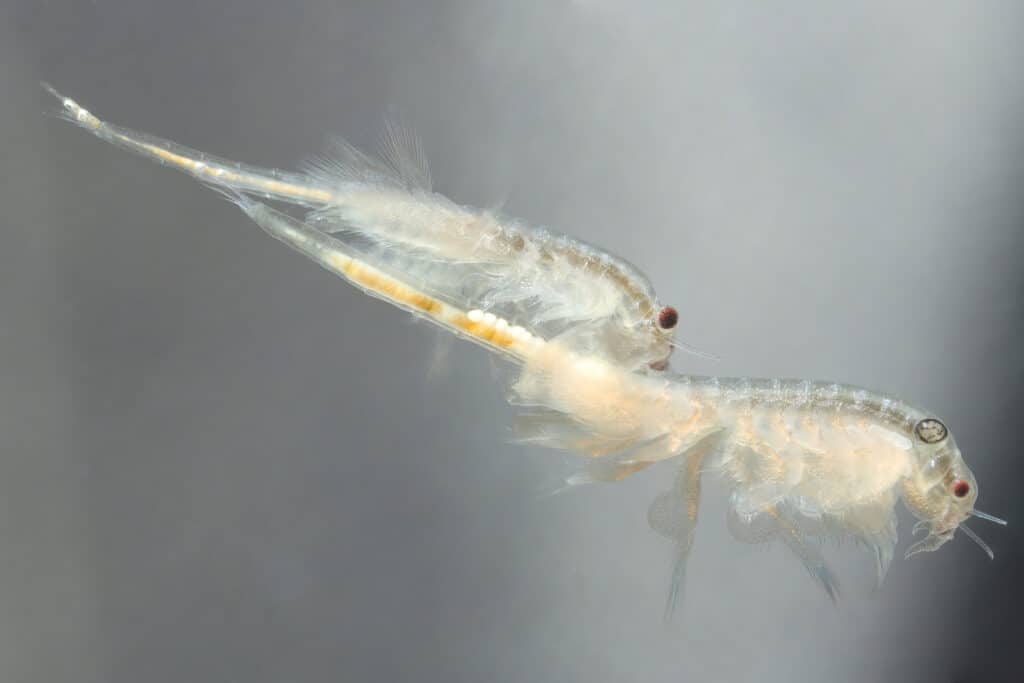 Brine shrimp are an extremely useful live or frozen food for aquarium fish and aquaculture.

But if you’ve just bought a big bag of brine shrimp to last your fish several days, you may be wondering what’s the best way to keep them alive.

Brine shrimp can be successfully kept alive in a refrigerator for up to three days, and much longer than that in their own designated tank.

In this guide, we’re going to show you how.

What Are Brine Shrimp?

Artemia salina, the brine shrimp, is a small saltwater crustacean that has become one of the most popular live, frozen and freeze-dried foods for aquarium fish.

Also branded as Sea Monkeys and Aqua Dragons, they contain essential lipids, vitamins, minerals, and amino acids, and provide a powerhouse of extra nutrition for all kinds of aquarium fish.

They’re especially popular for carnivorous fish such as betta fish and South American cichlids and for feeding fish fry.

How Are Brine Shrimp Raised?

Brine shrimp are raised in large, commercial tanks to be sold in pet stores but many people also like to raise their own brine shrimp at home.

Often marketed as Sea Monkeys, brine shrimp have become popular pets in their own right, and their easy-to-care-for nature makes them great for children.

The best temperature for hatching eggs is 75–81°Fahrenheit, but room temperature is also sufficient.

What Do Brine Shrimp Eat?

Brine shrimp are passive filter feeders, which means they collect up whatever is in the water and sweep it into their mouths.

Anything that is the right size for them to swallow, they will eat! In the wild, this includes various types of algae, cyanobacteria, archaea, bits of detritus, and diatoms.

It’s said that the best type of food for brine shrimp is Dunaliella viridis – microscopic, soft, and nutritious algae that they would feed upon heavily in the wild.

How Do You Keep Brine Shrimp Alive in Your Own Tank?

If you have a dedicated tank for hatching or keeping brine shrimp, it should be fairly easy to keep them alive. Healthy brine shrimp can live for 2-4 years which is very impressive for such a small crustacean!

A tank heater and thermometer are a bonus since brine shrimp will grow more quickly in warm water that’s kept at a constant temperature, but any tank kept in a warm room should be fine.

Since algae are the main food of brine shrimp, some aquarists like to leave their brine shrimp tank exposed to a little direct sunlight to stimulate algae growth. Just don’t overdo it or your water might overheat!

Brine shrimp only need to be fed their specialized ‘growth food’ every 5 days. In the space in between they will live off algae in the aquarium water.

If water conditions become cloudy, simply hold off feeding them. The particles suspended in the water will soon become food for both algae and brine shrimp, and let’s not forget that algae are their favorite food!

How Do You Keep Live Brine Shrimp From the Pet Store Alive?

If you’ve just bought live brine shrimp from the pet store and don’t have your own dedicated brine shrimp tank, then the best way of keeping them alive is to store them in a cold, clean environment in a saturated saline solution made from unchlorinated water.

Storing Baby Shrimp in a Refrigerator

Catch your baby brine shrimp (BBS) in a fine mesh net and rinse them with fresh water to wash away the worst of any bacterial infections. Divide the baby brine up into shallow Petri dishes with a saturated brine solution and place them in the fridge.

Baby brine shrimp stored in this way should stay alive for 2-3 days so that you can extend your feeding time.

Adult brine shrimp can also be kept in a cold environment where their metabolism slows down and they become almost dormant. Some pet stores will even keep them in this way for short periods before the brine shrimp are sold.

Since brine shrimp need plentiful oxygen, a flat, shallow container is best to allow for plenty of gas exchange. You can expect adult brine shrimp to survive this way for up to 3 days.

Brine shrimp are fairly hardy little critters that will tolerate quite a wide range of environments.

If introduced gradually, brine shrimp will even tolerate living in freshwater for short periods, and the fact they can survive in a fridge reveals they can survive at very low temperatures too.

But one of the things that brine shrimp hate is sudden changes in their water salinity. If their saline water is suddenly flooded with freshwater, they are likely to suffer from shock and perish within hours.

Brine shrimp also require a plentiful oxygen supply, and will die from hypoxia in water that has insufficient dissolved oxygen levels.

This is the reason that it’s recommended to keep them in shallow containers with a large surface area where plenty of oxygen can dissolve, or in tanks with sponge filters or air stones to increase oxygenation.

Can You Keep Brine Shrimp in a Jar?

Because brine shrimp need a plentiful supply of oxygen, the narrow opening of a glass jar is unlikely to provide sufficient surface area to give these creatures enough oxygen to survive, even if you kept the lid off.

The same applies to glasses or cups of water.

Old pickle jars are especially inappropriate because the brine shrimp are averse to the remnants of strong-smelling flavors – it’s even been noticed that eggs struggle to hatch in such environments!

Are Brine Shrimp the Same Thing as Sea Monkeys and Aqua Dragons?

Essentially, there is no difference between Sea Monkeys, Aqua Dragons, or any other version of Artemia salina – the brine shrimp.

Brine shrimp are versatile crustaceans that can be kept as pets or used as live or frozen fish food.

If you want to keep them alive for a few extra days before feeding them to your fish, then a flat container stored in a refrigerator is your best bet.

For longer periods, brine shrimp need to be kept in their own designated tank with a plentiful supply of oxygen and algae to feed on.

To learn more about alternative fish foods, check out our dedicated guide here.