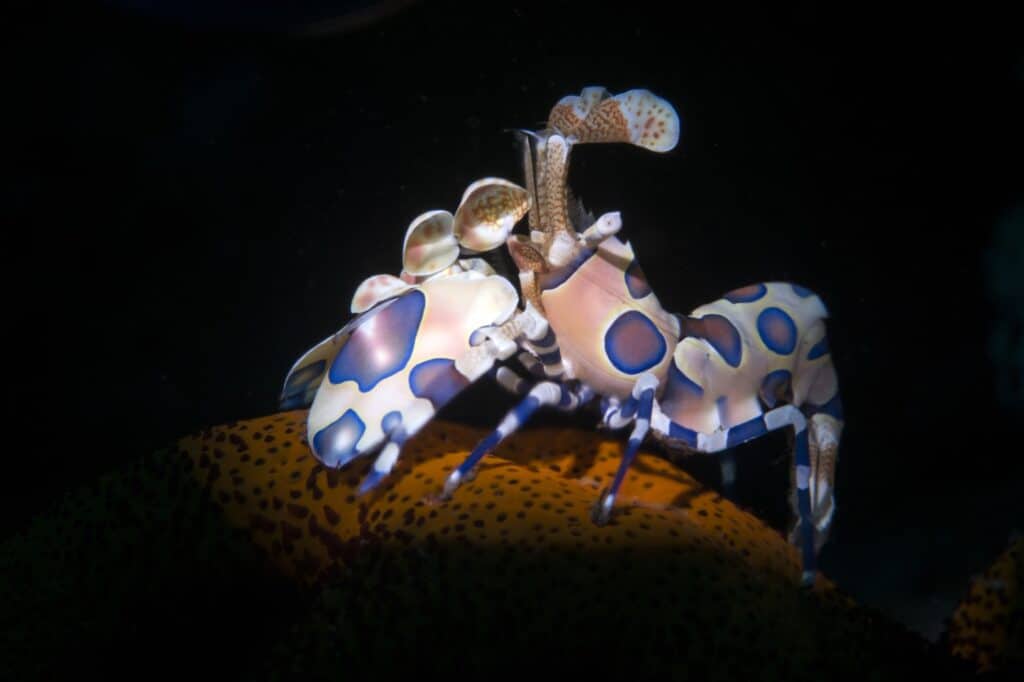 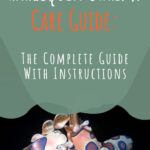 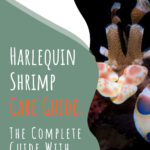 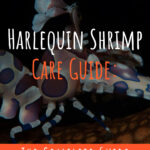 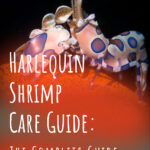 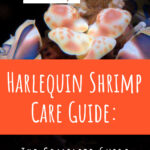 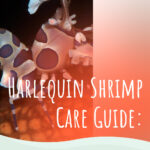 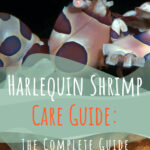 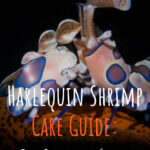 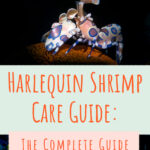 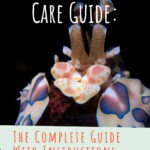 The harlequin shrimp might be one of the most beautiful saltwater invertebrates currently available in the aquarium hobby. While these shrimp do well in community and reef tank settings, their selective diet makes them slightly more difficult to keep than other marine shrimp. However, if you’re struggling with an Asterina starfish problem, then a harlequin shrimp might be a good addition to your aquarium.

Keep reading to find out everything you need to know about harlequin shrimp and how to keep yours healthy and happy!

Hymenocera picta is known as the painted shrimp, clown shrimp, or even as the dancing shrimp; in the aquarium trade, they are most commonly labeled as harlequin shrimps due to their coloring and patterning that resembles the costume of a pantomime character.

The harlequin shrimp is thought to be the only true species within the Hymenocera genus, however, there is some debate about possible variations of Hymenocera picta. H. picta was originally known as H. elegans and is still considered synonymous; some researchers believe that H. elegans also refers to a variety of H. picta that inhabits the western Pacific into the Indian Ocean and also appears to be a more brownish color with blue accents.

Harlequin shrimp are saltwater invertebrates that originate from the warm waters of the Indian and Pacific Oceans, around the coasts of eastern Africa, Australia, and the Galapagos Islands; it is believed that H. picta mainly occupies the central and eastern regions of the Pacific, though the species is still being researched.

They live in the safety of coral reefs where they are protected from predators and have an abundance of starfish to feed on. It is common for these shrimp to form a breeding pair and they tend to become aggressive when other shrimp enter their territories.

The harlequin shrimp might be one of the easiest shrimp to identify as its patterning is unmistakable. These shrimp are cream-colored with pastel blue, pink, and purple spots. They have two large flattened claws and an ornate head that is believed to help better detect scents through the water.

These shrimp can grow to be 1.5-2.0 inches (3.8-5.1 cm) when fully grown; males tend to grow slightly smaller than females, but other differences between males and females are limited.

How long do harlequin shrimp live?

Harlequin shrimp can live between 5-7 years with ideal tank conditions. As we’ll discuss later, the biggest challenge with keeping this species of shrimp is meeting their dietary needs.

Because these shrimp stay small, many saltwater hobbyists like to keep them in nano tanks, or tank setups that are smaller than 40 gallons (151.4 L). While they don’t get too big, it is still recommended to allow at least 10 gallons (37.9 L) per shrimp.

Otherwise, harlequin shrimp will appreciate lots of hiding spots to establish territories. They do best in optimal saltwater tank conditions, with salinity between 1.024-1.026 and temperature constant around 78° F (25.6° C). It is important to have good amounts of calcium, iodine, and magnesium to be available in the aquarium as these elements are essential for successful exoskeleton molts.

Like any other invertebrate, traces of copper can prove to be deadly.

For many saltwater fish, small invertebrates can be seen as an easy snack especially if the animal is at its weakest during molting. Harlequin shrimp might make an even easier meal due to their smaller size.

For the most part, these shrimp will be safe with most marine community fish as tank mates, like clownfish, gobies, cardinals, and some wrasses; as long as the fish cannot easily fit a harlequin shrimp in its mouth or is overly aggressive, then the pair should be compatible!

In terms of keeping harlequin shrimp with other species of shrimp, they do best as the only shrimp in the tank or when kept in a group of two as they can become territorial. However, some aquarists have had luck keeping harlequins with other species, like cleaner shrimp (Lysmata amboinensis) and fire shrimp (Lysmata debelius), as long as the tank is big enough and enough hiding spots are provided throughout the rockwork.

Many hobbyists are attracted to the harlequin shrimp because of its colors and delicate appearance; there’s nothing else that really looks like them!

Not only do they add a new palette of colors to the aquarium, but they are also one of the few truly reef safe types of marine shrimp. Harlequin shrimp have a very limited diet and only eat echinoderms or species of starfish. This means that all corals and fish will be safe in your tank!

Harlequin shrimp behavior seems to depend entirely on the personality of the individual shrimp. Some hobbyists find that their harlequin shrimp ventures around the entirety of the aquarium while others never see their shrimp outside of its cave. Regardless of what portion of the tank they prefer most, they will stay pretty stationary and won’t make any quick movements.

Like other shrimp, the harlequin shrimp undergoes a molt about every month and a half; this is the process in which the shrimp sheds its exoskeleton in order to grow. Trace elements, like calcium, iodine, and magnesium, are essential for this process to take place.

This shed exoskeleton can easily resemble a dead harlequin shrimp at first glance. If this happens, it is best to look for your shrimp to see if it is still alive. Note that during this time, your shrimp is at its most vulnerable point and it’s likely to be hiding. If you don’t see your shrimp anywhere in your aquarium, make sure that all other tank inhabitants are accounted for and acting normally. If you have any concerns, check water parameters immediately.

Otherwise, you may leave the exoskeleton in the tank. Your harlequin shrimp, as well as other members of your cleanup crew, will quickly recycle the shed back into useable nutrients.

The hardest part–and the care requirement that most hobbyists don’t know about when they go to buy a harlequin shrimp–about owning one of these shrimp is their diet. The harlequin shrimp is a predator that relies entirely on live starfish as a food source. Unlike most other aquarium shrimp, harlequins will not eat algae, detritus, or any kind of pellet or flake food substitute.

One of the appeals of owning a harlequin shrimp is starfish control, namely of the often-seen-as-a-pest Asterina starfish. These starfish are a very common hitchhiker and are usually beneficial for helping clean up algae and detritus.

However, identifying Asterina can be near impossible, and unfortunately, there are several species that have been documented eating corals. This, on top of their ability to rapidly overpopulate saltwater reefs, persuade many hobbyists to eliminate their starfish problem. If the space is available, many people choose to naturally moderate populations with harlequin shrimp.

But what happens when the starfish population in your tank runs out?

The issue with harlequin shrimp care arises when already-existing food resources are depleted from the tank. While these shrimp can make a relatively large starfish last up to three or four weeks, it is still essential to have a thriving starfish farm readily available for regular feedings.

Some people like to set up a separate tank or refugium just so that they have a place to raise starfish. Asterina reproduce very quickly and some hobbyists simply let their shrimp tackle the ones available in the tank and harvest a population in a separate tank for additional food in the meantime.

Many hobbyists also offer larger species of starfish, like chocolate chip starfish (Protoreaster nodosus) and Linckia sp. (orange linckia, red linckia, and blue linckia); it should be noted that chocolate chip starfish are usually less expensive and hardier than Linckia sp. Both of these starfish can either be put into the tank and left to be hunted or can be manipulated by splitting off their arms and given one at a time; starfish have the ability to regenerate appendages and often drop them as a defense mechanism!

Harlequin shrimp display a fascinating hunting behavior. These shrimp flip the starfish onto its back and start to eat the tube feet on each arm; tube feet enable starfish to move and cling onto surfaces. They then work their way to the center of the starfish where they devour the soft tissues and remaining body. It can take up to a month for a harlequin shrimp to completely finish eating a larger starfish!

As with all invertebrates, proper acclimation is essential for the success of your shrimp in your tank. Harlequin shrimp are very sensitive to changes in water chemistry and do not react well to foreign chemicals, such as those commonly found in dips.

The best way to prepare your shrimp for your tank is by doing a lengthy drip acclimation. Most aquarists like to give at least an hour and a half or two full hours for their shrimp to adjust to the parameters in the tank. If this is not possible, water from the tank should still be manually added to the bag or container over a longer period of time so that parameters can align.

For even more chances of success, make sure to provide plenty of hiding spots for the shrimp and leave the lights off for a few hours upon adding it to the tank; good acclimation is especially important as these shrimp can be very expensive, especially if buying a mated pair.

Harlequin shrimp can make a beautiful addition to a reef tank. Their pink, purple, and blue colored spots and often bold personalities make them one of the more unique invertebrates that can be found in community saltwater aquariums.

However, harlequin shrimp are not beginner shrimp and need special research and care. While they can be kept in relatively small aquariums, their need for live echinoderms takes extra consideration and can become costly over time.

If you have any questions about harlequin shrimp, other types of saltwater shrimp, or have had experience keeping one of these beautiful invertebrates in your own aquarium, don’t hesitate to leave a comment below!