Why Goldfish Bowls Should Be Banned 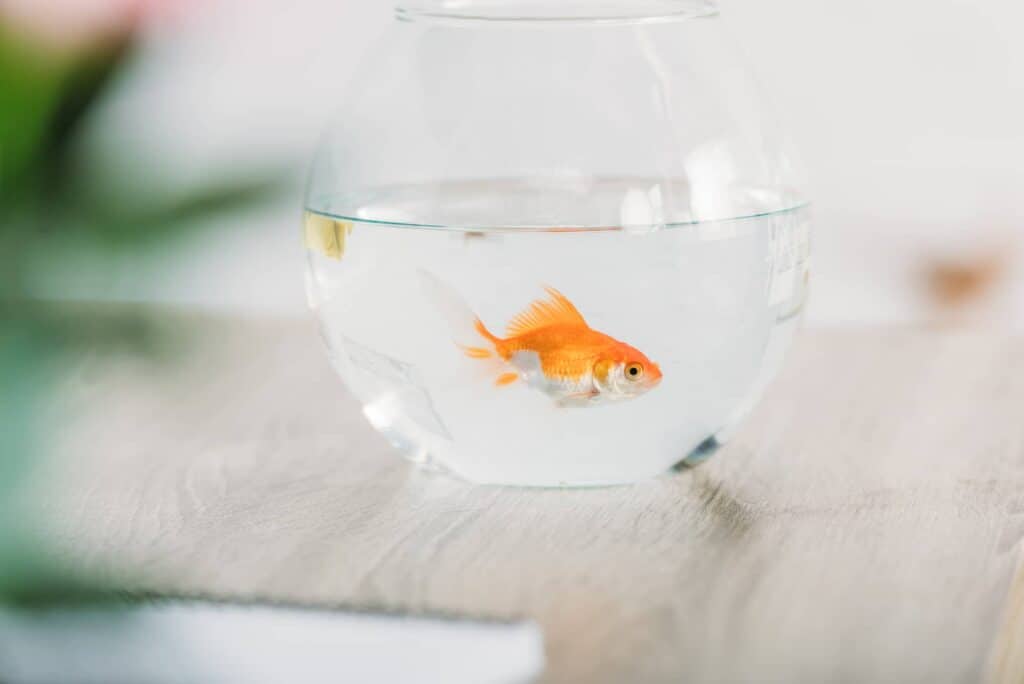 Most people have owned a goldfish at some point in their life. Goldfish are the most popular type of fish at home and for good reason. They are generally low-maintenance pets compared to cats and dogs, and with proper care, they can live up to 20 years.

The classic setup for a common goldfish isn’t really a “setup” at all, though. Many people simply buy any one of the generic fish bowls they see at pet shops, drop the goldfish in it with some tap water and a plant — maybe an ornament for aesthetic reasons — and consider that to be good enough.

It isn’t. It’s a recipe for disaster, and these fish bowls should be banned.

Keep reading to find out why and, more importantly, what a proper goldfish aquarium looks like.

Where in the world are goldfish bowls banned?

In October 2005, the Italian city of Rome established new animal welfare rules that officially banned the giving of goldfish as fairground prizes. These forward-thinking lawmakers also passed a by-law banning pet owners from keeping their pet fish in goldfish bowls.

Although the council in Rome didn’t precisely state the reason for the ban, the newspaper Il Messaggero claimed that keeping goldfish in the dreaded fish bowl caused them to go blind. Other cities, including Monza in Italy and most cities in Mexico and Sweden, quickly followed suit, establishing their own animal protection rules for goldfish keeping.

Additionally, since 2008, the government of Switzerland established terms for people who owned goldfish, making it illegal for them to keep only a single goldfish. The reason? They are happier in groups of additional goldfish.

Unfortunately, despite the efforts of animal rights activists and animal welfare experts, the rest of the world is still lagging behind changing animal welfare law in recognizing the unsuitability of bowls for keeping pet fish alive.

What’s so bad about goldfish bowls?

There are several reasons why keeping fish in bowls is totally unsuitable for captive fish.

Goldfish are actually the domesticated descendants of a species of wild carp. This might be surprising since carp are large fish, but, in fact, most of the 100 or more species of goldfish can grow pretty large too.

Long-bodied goldfish such as Comets are more at home in a pond rather than a tank, growing up to 12 inches long, and tiny, inch-long baby Calico fantail goldfish will reach at least 6 inches in length as adult goldfish.

Goldfish are quick growers and active swimmers — a cramped bowl is clearly no place for fish of that size.

I love goldfish. I love their individual characteristics and personalities. I enjoy watching the way that they interact with each other. When I bought my fancies a few months back, they were tiny, timid little 1-inch long creatures that spent their whole day hiding in the plants.

Now, my goldies measure 3-inches in length, and they’re growing by the day!

Needless to say, once my fish are larger, they will be transferred to a pond in my garden with a larger surface area.

You’ve probably heard that goldfish only grow to fit the size of whatever bowl or tank they’re kept in. This is entirely false, and the sure sign of a careless aquarium owner. While the fish’s growth rate will slow down, it will continue to grow until it eventually outgrows its cramped space.

Goldfish are highly active creatures that appreciate plenty of swimming space. Long-bodied goldfish are especially fast swimmers, and even their round-bodied fancy counterparts like to spend their time exploring the tank and foraging for scraps of uneaten food. If they’re unable to swim comfortably, they will eventually become stressed and prone to health problems and pain.

Ideally, you want to make sure the aquarium allows for a minimum of 1 gallon of water per 1 inch of fish. That’s simply not possible in a tiny goldfish bowl.

The other big problem with keeping goldfish in a small bowl is that they are frankly rather dirty fish, generating high amounts of waste. They don’t have a stomach! Everything they eat simply passes right through them, and that waste quickly decomposes in water, raising ammonia levels, nitrite levels, and nitrate levels. Each of these harmful chemicals is especially toxic to aquarium fish.

Low nitrate levels might not be fatal in a 40-gallon aquarium, but the same amount of nitrate can easily kill a fish in a bowl or 5-gallon tank because there is less fresh water to dilute it. A goldfish bowl cannot comfortably accommodate a filtration system, and, without one, the water quickly turns foul. Ammonia burns the fish’s gills, gradually suffocating the poor creature until it dies.

Although you could carry out partial frequent water changes, the bigger the fish gets, the more waste it produces, and the more frequent the water changes must be. Too many water changes remove any beneficial bacteria from the environment that would otherwise process the ammonia.

So, in effect, a pristine bowl filled with clean, dechlorinated water is not going to stay clean for very long and is not a healthy, natural environment for fish anyway.  Bottom line: to keep aquarium fish healthy and avoid dirty water, you need an efficient, well-maintained, functional filter.

Goldfish are very oxygen-hungry fish and, as such, need well-oxygenated water. A goldfish bowl only offers limited surface area, leading to poor gas exchange and insufficient oxygen for fish in the bowl. Adding an air bubbler or air stone won’t cut it!

Ideally, you want to provide your goldfish with a rectangular aquarium that has a large surface area. Lush planting is also a good way of oxygenating the water, as plants absorb CO2 and produce oxygen as part of the process of photosynthesis.

Although many beginners to the fish keeping hobby assume that a small fish tank or bowl will be easier to maintain, that’s actually not the case.

The smaller the aquarium, the bigger the effects of small changes in water quality, water chemistry, and temperature are, which is why tanks that offer a larger water volume are much easier to keep stable. Temperature fluctuations are also much more extreme in small amounts of water because there is no buffer to slow the changes down.

That’s bad news for goldfish, as the stress caused by fluctuating water chemistry compromises the fish’s immune system, making the animal much more susceptible to diseases and parasites.

Although goldfish are not a schooling species, they are highly social animals that do best when kept in the company of their own species and other suitable tank mates.

Ideally, you want to keep a group of goldfish in a spacious tank or garden pond where they can socialize. In fact, goldfish living in a pond setting often reproduce every spring without any intervention from their owners!

Keeping one lonely goldfish all on its lonesome in a small bowl is cruel. The fish will most likely become stressed and die pretty quickly.

Why is the open top of a goldfish bowl dangerous?

Unlike conventional fish tanks that have a hood, lid, or cover slide, goldfish bowls have an open top. There are a number of dangers to open-topped bowls for goldfish:

The main danger of an open-topped fishbowl is that the fish might commit suicide!

Wild carp are perfectly capable of jumping, as you can see in this YouTube video clip. And, yes, your goldfish can jump too!

Fish jump out of their tanks for several reasons:

Also, goldfish can become startled when you’re cleaning out their tank, causing a fish to leap right out of the water and finish up on the living room carpet. Essentially, to avoid finding a dead fish on your floor, use an aquarium with a lid.

Dust, insects, household cleaning chemicals, and other airborne debris can easily get into the water of an unprotected bowl or tank without a lid.

That pollution can quickly poison the water, making your goldfish sick or even killing them.

You may have noticed that your pet cat sometimes sits transfixed by the activity of the fish, swimming around their bowl. However, if the bowl doesn’t have a lid, what’s to stop Tibbles from going fishing while your back is turned?

All it takes is for one curious paw to hook out your goldfish, and Bubbles ends up on the carpet as a cat toy. Or even kitty’s lunch!

Little kids can also be curious about those beautiful, shiny fishies in their bowl. And it’s not unheard of for a child to remove a goldfish from the bowl and take it out for a walk in the garden.

Now, that’s clearly not a scenario that will end well for the fish!

Because of the shape of the glass, the fish’s view from inside the bowl is distorted. So, when you approach the bowl to feed the fish, they see a huge, blurred blob approaching. That’s guaranteed to be frightening and stressful for the fish.

When fish become stressed, their immune system is compromised. That leaves the fish less able to fight off the effects of diseases and attacks by parasites. Although an acrylic tank or bowl creates less distortion than a glass one, the shape of a bowl still distorts the fish’s view.

What’s so bad about goldfish bowls? — A Summary

So, what’s so bad about goldfish bowls?

Finally, goldfish are social fish that need to live in small groups with conspecifics or other suitable tank mates. A goldfish bowl is too small to permit that.

Keeping goldfish in bowls, vases, or small tanks drastically reduces their life expectancy, and an experienced fish tank keeper would never keep their fish in a small bowl.

Goldfish are large species of fish when fully grown, and they also produce a lot of waste. So, to keep your goldfish healthy, keep them in a large tank or garden pond with an efficient filtration system and sufficient oxygenation, not a small bowl.

If you have questions about your own goldfish, want to share your experiences, or have something to add to this article, leave a comment below.

96 thoughts on “Why Goldfish Bowls Should Be Banned”