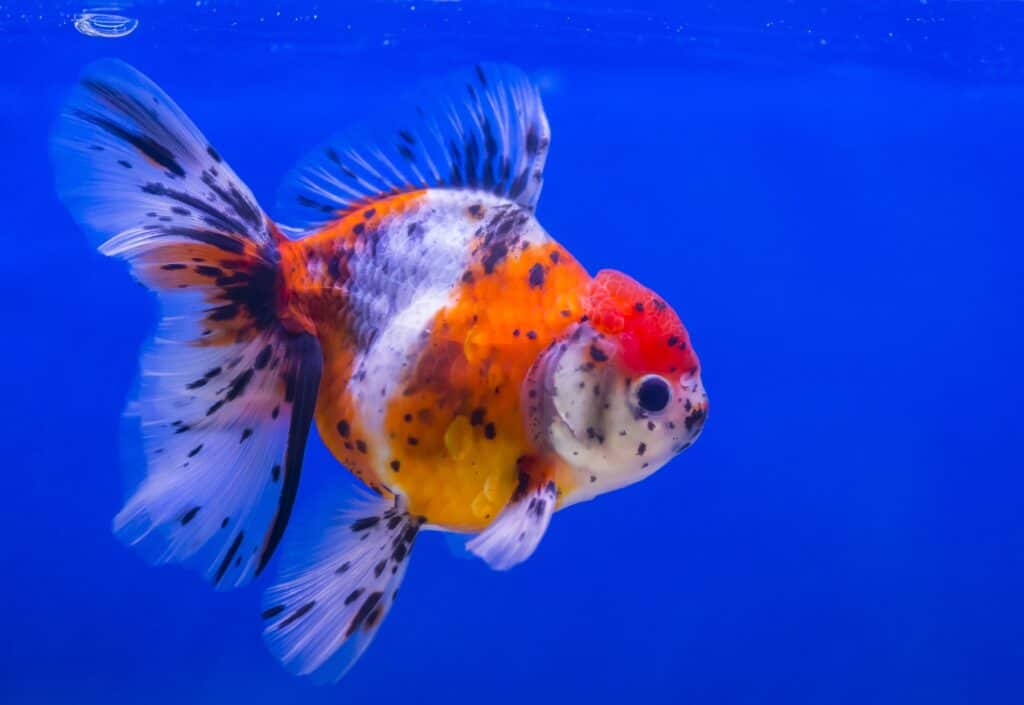 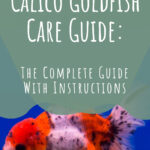 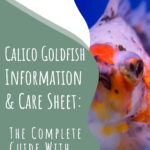 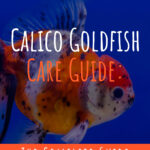 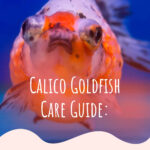 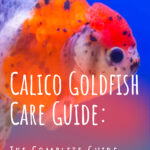 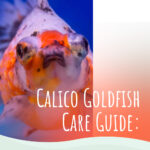 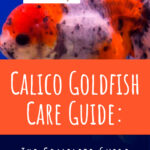 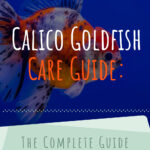 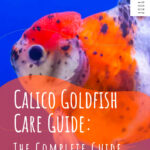 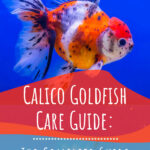 Goldfish come in many shapes and sizes and it can be difficult to correctly identify the true name and variation of your goldfish. The calico goldfish is one of these variations and can be easily identified by their usual tri-color patterns. It should be noted that sometimes shubunkin goldfish are referred to as calico goldfish as well.

Keep reading to find out everything you need to know about calico patterning and the care required to keep one of these speckled goldfish healthy and happy in your own aquarium!

Unlike oranda, ryukin, or shubunkin goldfish that all have different kinds of body shapes and fin-types from each other, calico is a type of coloration that can be and has been bred to be expressed across breeds. These fish get their name after the same patterning that is usually found on cats, which were originally named after the fabric of the same name.

‘Calico’ patterning is often used to describe other colorations across species as well, such as the calico molly.

Calico goldfish do not occur naturally in the wild, and if one does, then it is most likely a mutation from a released-aquarium fish.

Goldfish (Carassius auratus) are derived from several species of wild carp that were–and some still are–abundant in the slow-moving waters of Central Asia. Beginning in the 1400s, China traded variations of these wild carps, eventually leading to the many shapes and sizes of the common goldfish we know today.

The calico coloration is pretty easily-identifiable even if it varies with every individual fish. These fish usually have patches all across their body, including on their fins, of white, red, yellow, and black to varying degrees and sizes; it is also common to see a calico with lighter splashes of grey and even blue.

It should be noted that true calico goldfish are often exclusive to shubunkin varieties; shubunkin goldfish have been bred to express this white, red, yellow, and black calico coloration, as well as a pearly appearance to their scales.

For more information about keeping shubunkin goldfish, make sure to check out our full care sheet here.

How big do calico goldfish get?

Since calico goldfish come in a variety of goldfish breeds, like telescope eyes, ryukins, and fantails, they can reach different sizes. However, one of the largest breeds of goldfish is the oranda goldfish, which can grow to be a foot (30.5 cm) long; oranda goldfish do come in calico and have the potential to reach full size.

How long do calico goldfish live?

In exceptional tank or pond conditions, goldfish can easily surpass 10 years of age, with the current record being set at 43!

However, how long your calico goldfish lives largely depends on the breed. This is because some breeds have been bred to express detrimental characteristics that hinder their ability to thrive, like fancy goldfish with exaggerated fins and head growths.

Because of these enhancements, the fish may become easily exhausted from swimming, which can deter eating and overall quality of life. Sadly, on top of this, many genes have been compromised and lead to a shorter life span regardless of if the hobbyist gives the best care possible.

Believe it or not, goldfish change color all throughout their life! When goldfish are born, they are usually a dull color of brown, grey, or even black. This is to help with staying unseen and uneaten while they are still small.

As they grow, they start to take on their signature colors and patterns. These colors and patterns have been known to change quickly, over the course of a month or even a few days, and is usually nothing to worry about. However, it’s always a good idea to test water parameters if something doesn’t look right in your freshwater tank or pond.

Otherwise, it is normal to see your calico goldfish change color throughout its life. Often times, the light grey and blue areas between darker spots are usually the result of a red, black, or yellow patch fading or developing.

It should also be noted that lighting, tank setup, diet, and water quality will all play a large role in the appearance of your fish. Some lights can make colors appear completely different, which makes buying fish based on color in the store difficult. Tank setup can also be used to create a deeper contrast between colors, with darker substrates accenting the lighter colors of the fish. Both diet and water quality will also reflect in the quality of color that your goldfish displays.

Calico goldfish tank or pond requirements largely depend on the different types of goldfish that you plan on having. Goldfish are not recommended to beginner aquarium hobbyists because of the amount of waste they create, and even the smallest breed of calico goldfish can be demanding on water changes and general tank upkeep.

In general, small types of goldfish, like telescope eyes and fantails, can be kept in a minimum aquarium size of 20 gallons (75.8 L) with bigger always being better. The biggest problem with keeping goldfish is the amount of waste they create, which can easily cause ammonia levels to spike. For every goldfish tank, it’s almost essential to have a filter that is rated for more than double the size of the aquarium to keep up with the demand.

If planning on keeping a true calico shubunkin goldfish, it is best to go as big as possible. Some hobbyists believe that keeping only one shubunkin in a 15 gallon (56.8 L) is enough open space for the fish to happily swim and to keep ammonia levels down. However, if you really want to keep your shubunkin happy and also have more than one fish in the tank, at least 75 gallons (283.9 L) is recommended.

Just like other goldfish, all calico goldfish are coldwater fish and do not usually require a heater. While they do not need the tropical temperatures that most aquarium fish need, they do need relatively stable temperatures to keep them from going into shock or prompting hibernation.

Just like other fish, goldfish do need an aquarium light to regulate the sleep/wake cycle. It’s also essential to have heavy filtration as goldfish create a lot of waste that quickly turns into ammonia which can become lethal at relatively low levels. These fish are usually kept in a larger tank size or pond in order to dilute that amount of waste that is created. On top of good filtration, most goldfish hobbyists perform more frequent water changes than they would for other aquarium fish.

Goldfish can be kept on sand, gravel, or bare bottom. It’s important to note that goldfish naturally sift through the substrate for food, and it’s to be expected that your fish will regularly disrupt your sand or gravel! Many hobbyists choose to keep them in a bare bottom tank as this makes it easier to clean up waste and you don’t have to worry about a constantly shifting substrate.

It’s also important to consider that goldfish are omnivores and they will eat plants. Some aquarium hobbyists like to keep floating plants, like duckweed, with their goldfish as they will usually grow faster than they can be eaten and take up a lot of excess nutrients. If attempting to keep live plants with your fish, also remember that they will probably uproot them from time to time!

If keeping more designer types of goldfish with modified eyes, fins, or heads, then it’s best to eliminate as much possible danger from the fish tank as possible; this includes sharp decorations and plastic plants as well as ridged gravel. It’s very easy for these fish to accidentally bump into something and injure themselves, which can quickly lead to infection.

Goldfish are active fish. Even those goldfish with longer fins and bigger heads try their best to constantly push themselves through the water. These fish like to swim across all levels of the water column and might stress out slower-moving fish; this is especially true during feeding times as goldfish lack stomachs and can process foods very quickly through their intestines, meaning that they’re usually hungrier than other fish!

For the most part, all goldfish have relatively the same behavior. If you notice that your fish is gasping for air, laying on the bottom of the tank, or has red marks across its body, then it’s time to check water parameters as these are common symptoms of ammonia poisoning!

While calico goldfish are not any more aggressive than any other type of goldfish, it’s important to accommodate for the breeds you plan on keeping. For example, shubunkin goldfish might not be the best choice to keep with fancy goldfish in a tank setting due to varying levels of activity which can possibly lead to trouble during feeding times.

In a larger pond setting, you may have much more control over making sure that your fish are not outcompeting each other.

Despite the type of goldfish you have, all breeds are omnivores. This means that they rely on both meat- and plant-based foods, which might come as a surprise to some hobbyists! Luckily, these fish will eat almost anything you put into their tank.

In order for these fish to keep their healthy and vibrant white, yellow, red, and black patches, they need to eat a variety of high-quality foods. It is best to use a high-protein goldfish flake or pellet as the main staple of their diet. Always make sure to remove excess food after a few minutes or it will contribute to the overall waste in the aquarium.

Otherwise, these fish may be given a variety of live, frozen, and freeze-dried foods, like worms (earthworms, bloodworms, Tubifex worms), brine shrimp, and even mealworms or crickets. Your fish will also appreciate a variety of blanched fruits and vegetables, like apples, zucchini, and lettuce.

It is important to note that some goldfish might even try to go after some species of freshwater snail. If wanting to keep snails with your goldfish, make sure that they are bigger than the size of your fish’s mouth, and be prepared to potentially lose a couple!

The calico goldfish may be in reference to the white, red, yellow, and black colorations of some breeds of goldfish or might be used to categorize shubunkin goldfish. The calico coloration comes in most common goldfish breeds, like ryukin and oranda goldfish, with all having the possibility of changing colors over their lifetimes.

Luckily, no matter which type of calico goldfish breed you go for, the care for all of them is relatively the same. Just keep in mind that if you keep more delicate breeds, like fancy or telescope eyes, then you might need to choose tank mates a little more carefully and keep sharp objects out of the aquarium.

If you have any questions about calico coloration, the different breeds of goldfish, or have had experience keeping one of these freshwater fish in your own aquarium or pond, don’t hesitate to leave a comment below!