Why Do Fish Jump Out Of Water: All The Answers 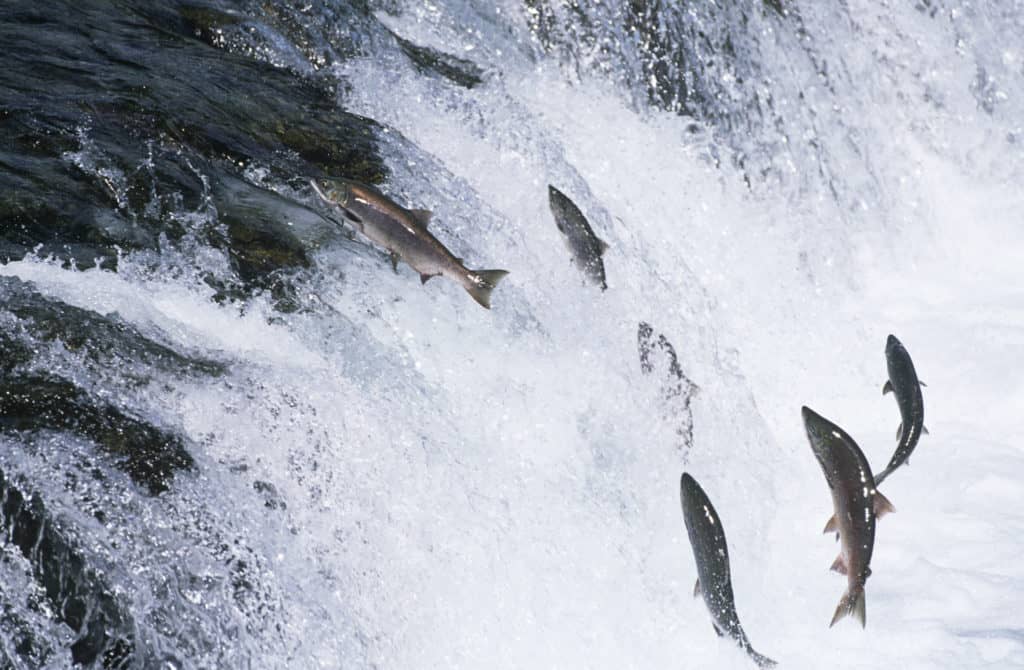 In the wild environment, fish are often seen leaping right out of the water, and to the alarm of hobbyists, some tank-kept fish do that too, sometimes jumping out of the tank!

But why do fish jump out of the water, how do they manage to do that, and what can you do to stop your pet from leaping clean out of their aquarium to almost certain death on your living room floor?

Why do fish jump out of water?

There are lots of reasons why fish jump out of water.

First of all, let’s take a look at fish in the natural environment and explore why they might want to leave their watery domain.

To get past an obstruction

If you’ve ever taken a trip to a salmon river or seen a wildlife documentary featuring the annual salmon run, you’ll have seen dozens of fish leaping right out of the water to get past a natural obstruction.

In this YouTube clip that was filmed in Ireland, you can see Atlantic salmon jumping out of the water in an attempt to get past a waterfall as they make their way upriver to their spawning grounds. A salmon making its way upstream can leap up over nine feet to scale a waterfall!

So, how do the fish manage this amazing feat?

Well, the salmon points its head in the direction in which it wants to go while flexing the rear portion of its body into a coiled S-shape. The fish’s tail is kept over to one side, which generates a lot of thrusts that is directed backward and to the opposite side, pushing against the water as the fish sweeps its tail.

The salmon continue to beat their tail back and forth as they move up through the water column until they briefly become airborne. The same technique is used by fish that hunt insects by leaping out of the water vertically and snatching prey from overhead.

Some species of fish use leaping out of the water as a means of escaping from and confusing predators.

These fish have a primitive flight response that enables them to leap from a standing start. To do that, they bend backward over their tail to form a C-shape, flick themselves forward, and paddle with their fins as fast as possible. The action creates a rapid undulation through the fish’s body, launching it up through the water surface into a long arc, and splashing down somewhere further ahead. Neither the fish nor the predator has any clue where the splash-down point will be.

An extreme example of a fish that leaps out of the water to get away from predators is the flying fish. Flying fish or Exocoetidae to give the creatures their scientific name, are a marine fish species that are often pursued by predatory deepwater fish species, including marlin, tuna, swordfish, and giant mackerel.

Flying fish are able to remain airborne for a lot longer than other species thanks to their overdeveloped front fins, which act as wings, allowing the fish to glide for a distance before landing back in the water. You can see just how effective that evolutionary quirk is in this video clip of flying fish being hunted by yellowfin tuna.

Because something spooks them

Most fish species feature somewhere in the food chain and, as a result, are easily spooked.

A well-known example of that is the documented phenomenon of a river full of giant Asian carp leaping en masse when spooked by a fishing boat’s engine. The Asian carp is a non-native fish that is now causing overpopulation problems in some areas of the Great Lakes, sometimes causing danger to people who are using the waterways for fishing or pleasure boating.

One extreme example of the danger posed by leaping fish is the story of a woman who was boating in the Northern Territories when a three-foot-long mackerel, weighing around 22 pounds, leaped out of the ocean and flew past her, slicing her throat. Fortunately, the woman survived, although the mackerel did not, finishing up as lunch!

Some fish jump to catch food. In northern Australia, lives the tropical Southern saratoga fish, an ancient bony fish that is a voracious predator, renowned for leaping out of the water to grab frogs and small birds from branches that overhang the rivers where the fish lives.

Then there are needlefishes that hunt schools of small fish by launching an aerial attack. Thanks to the way in which water bends light, the prey is only able to see the predators through a kind of halo effect, surrounded by darkness. The needlefishes lurk a few feet away from the prey in the dark area before leaping out of the water and splashing into the center of the halo to attack the smaller fish.

To relocate or move around on land

Sometimes, fish need to use dry land to move from one body of water to another. Although some fish species are able to use their fins and tail to wiggle across the ground, jumping is much faster and causes a lot less damage to the fish’s body.

Mangrove killifish use a jumping technique to escape predators, chase food, or escape poor water quality. The fish use their tail to flip them forward as much as six to ten body lengths in one bound!

Another amphibious fish that can move around on land is the mudskipper, which moves along by using a process called “crutching.” The fish holds its body straight, moving its pectoral and pelvic fins just like a person using crutches. Also, the mudskipper can jump up to a foot off the ground to catch the eye of a potential mate.

What about aquarium fish?

Aquarium and pond fish also jump for different reason., which we will discuss in this part of our guide.

In their wild habitat, during the dry season, betta fish can find themselves trapped in receding puddles of stagnant water. That can mean that there is little food for the fish, or perhaps one fish finds itself to close for comfort to an aggressive male betta. To solve the problem, wild bettas are able to jump from one puddle to another, which they sometimes also do when in search of mates.

Species of eels are notorious escape artists, and although they do not actually leap out of the water, they will readily push themselves up through the water surface and out through surprisingly small gaps, ultimately finishing up out of the tank and loose in your living room!

In the captive environment, natural jumpers may sometimes leap out of the aquarium, apparently for no other reason than that they can! Basically, species that jump are simply mimicking their instinctual behavior.

Clearly, that’s extremely hazardous to the fish who risk ending up on the carpet, dehydrated and suffocating.

Perhaps the most common reason for fish to jump out of a tank is a lack of dissolved oxygen in the water.

Fish require a high level of dissolved oxygen in the tank water to enable them to breathe and may leap out of the tank in the hopes of finding a more well-oxygenated environment.

A lack of oxygen in the water happens for a number of reasons:

Look closely at your fish. If you notice them hanging at the surface of the water, appearing to gasp for air, or if the fish are breathing very rapidly, it’s highly likely that your water lacks sufficient dissolved oxygen for your fish.

If the water contains a lot of ammonia, nitrites, and nitrates, the environment will become toxic for the fish, and that can cause them to jump out in search of a cleaner home.

The first thing to do is to buy a test kit, which you’ll find in all good fish supplies stores or online.

Ammonia levels in your tank should be zero, as should nitrites. The level of nitrates should also be as close to zero as possible, although most tanks do contain a very low level up to 20ppm. Ammonia is formed by the fish waste in the water, dead fish, decaying plants, and uneaten food.

You can prevent the build-up of these toxic substances in your tank by carrying out weekly maintenance tasks, such as vacuuming the substrate with a special aquarium vacuum to remove detritus and performing partial water changes. Also, you must have an efficient biological filter unit in place, which will work to break down ammonia and render it harmless.

You will need to rinse the filter medium once a month and replace it periodically to maintain its efficacy. Also, it can be helpful to add a bacteria supplement to the tank water to help your filtration system function to its optimum.

Usually, you can remedy this problem easily by checking that the water temperature is correct for the fish species that you have in your collection. You can ensure that the temperature is consistent throughout the tank by siting the heater next to the filtration system pump output. That will push warmed water around the tank most efficiently.

Place an aquarium thermometer at the opposite end of the tank from the heater and site another one closer to the heater so that you can check the temperature is equal right through the water column.

Sometimes, fish will jump out of a tank if the environment is overcrowded. Overcrowding can lead to aggression and bullying, and fish that are being harassed and attacked can sometimes jump right out of the aquarium to escape an aggressor.

You may need to reduce your fish stocks if possible or provide a few more hiding places and thick planting to give vulnerable species somewhere to take shelter.

Occasionally, fish that are suffering from an infestation of parasites will jump out of the water. It’s thought that this behavior may dislodge the parasites when the fish land on the water surface, but that is unproven.

That said, skin parasites such as Ich do cause fish to flick and rub against the substrate and aquarium decorations in an attempt to get rid of the irritation. So, it could be that some fish jump for that reason too. Examine your fish carefully for signs of parasites, and treat appropriately to restore peace to the tank.

How to prevent jumping fish from escaping

If you have addressed all the aforementioned problems, you will need to take steps to physically prevent your fish from trying to jump out.

First of all, place a cover slide between the water surface and the lights in your tank hood. Be sure to leave at least an inch or so of space between the cover slide and the water, especially if you have labyrinth breathers such as bettas or gouramis in your community, and to provide as much surface area as possible for gaseous exchange to take place and keep oxygen levels high.

As you can see, fish are surprisingly athletic, and many species jump as a natural behavior.

To make sure that your aquarium residents stay put, check that your water is really well-oxygenated, free from ammonia, and the correct temperature. Remove algae from the tank sides, don’t overcrowd your community, and ensure that there are no aggressive bullies that could harass vulnerable fish, causing them to jump out of the aquarium.

Lastly, fit your tank with a cover slide and a securely fitted lid.