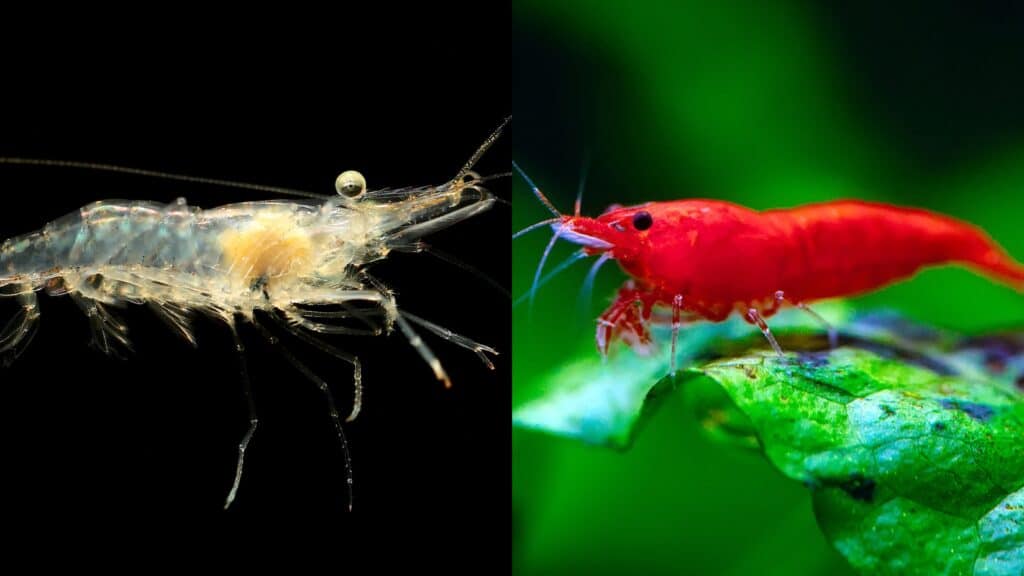 Cherry shrimps and Ghost shrimps are two of the most commonly kept freshwater aquarium shrimp species.

Their small size and easygoing temperament make them a great choice for beginners, and their ability to help keep the tank clean is a bonus for any aquarist.

But which one is the better of the two? Let’s take a closer look together at Cherry Shrimps and Ghost Shrimps to find out…

The first thing that you’ll notice when comparing cherry and ghost shrimp is that they look very different – and their names give us a clue as to how.

While cherry shrimps are a light pink to deep red color, ghost shrimp are translucent – you can see right through them!

This color difference is one of the main factors you’ll need to consider when choosing one of these species. A ghost shrimp’s beauty is more subtle, and their ghost-like bodies might be quite difficult to spot as they camouflage themselves among your aquarium plants.

Cherry shrimps on the other hand add a significant splash of color to the aquarium and stand out in high contrast to the green leaves that they crawl among.

Although it’s not a big difference, it could make an impact on which species you choose, since smaller shrimp are more likely to be preyed upon by carnivorous fish than larger ones.

Some people have also reported large ghost shrimps hunting small fish such as neon tetra. This is, in fact, very unlikely to be the behavior of a true ghost shrimp, but more likely their larger cousin the ‘whisker shrimp’.

To see a full comparison between ghost shrimps and whisker shrimps, click here.

The minimum tank size a species should be kept in is generally proportional to its body length. It shouldn’t be surprising then, that the larger ghost shrimp need a slightly larger tank than the smaller cherry shrimp.

While cherry shrimp could be crammed into a 5-gallon aquarium, we wouldn’t recommend this for ghost shrimps.

More space and more water are good for a shrimp’s health and make water conditions more stable and easy to manage.

In an ideal situation, both species are better off in a tank that’s at least 10 gallons in capacity.

When it comes to water chemistry, both of these shrimp are fairly tolerant, surviving in water up to pH 8 without problems.

Very acidic water of less than pH 6.5 is best avoided, however, since people keeping these species in acidic water have reported shorter lifespans and slower growth rates.

There are myths floating around the online aquarium community that these species need brackish water to thrive or breed, but scientific evidence has shown this is not true.

In one study, it was found that Adult Ghost shrimps could live at a salinity of up to 25 ppt (parts per thousand) but survival rates began to drop off beyond this.

The moral of the story is to always be careful to check reputable sources before changing your water chemistry to benefit your pets!

Both cherry shrimp and ghost shrimp can tolerate a wide range of temperatures but need fairly stable conditions for them to remain healthy.

Sudden swings in temperature can easily kill shrimps, so it’s worth getting a good thermometer to be sure of consistent temperatures.

While the optimum temperature for both species is around 68-80 Fahrenheit, both of them can survive in temperatures above and below this range, and people have also successfully kept both species in cold, unheated aquariums.

It’s worth noting though that cold water temperatures can suppress breeding, and if you want your shrimps to reproduce, it’s best to provide them with a temperature of around 70-80 Fahrenheit.

The most important feature you can install in your aquarium to keep your shrimp happy is plenty of hiding places.

Both of these species are very small crustaceans that can feel vulnerable, especially if there are larger fish swimming nearby. To help your shrimps feel safe, provide plenty of rocks and caves for them to hide amongst and, best of all, give them plenty of live plants.

Live plants are a shrimp’s best friend because they provide cover, an eating platform, and also a food source.

Ghost shrimp and Cherry shrimp both love to graze biofilm from plant leaves and, while they won’t attack healthy leaves, they’ll enjoy munching on leaves that have already died. They don’t call them the clean-up crew for nothing!

As we’ve already hinted, by eating aquarium debris, both of these shrimp species are fantastic at cleaning up a fish tank.

Algae, uneaten food, and dead plant matter are all favorites on their menus, and in a mature planted tank, they might not need much additional feeding.

If you already keep fish, then whatever your fish don’t eat will fall to the bottom of your tank and get hoovered up by your shrimp.

Cherry shrimp and ghost shrimp are both omnivorous and can benefit from occasional helpings of protein-rich treats like bloodworms, daphnia, and brine shrimp too.

Both of these shrimp species are relatively peaceful and will get along well with most community fish species.

It must be said that Ghost shrimps are the slightly larger and more predatory of the two species, meaning they’ll be more likely to eat fish fry and baby shrimps than cherry shrimps.

Good community fish species to be kept with ghost shrimp and cherry shrimp include neon tetra, guppies, danios, and rasboras.

Larger aquarium species such as angelfish, barbs, and discus must never be kept with nano shrimps like these unless you want your shrimps to become live food for your fish.

When it comes to lifespan, neither of these species can boast great longevity. Both ghost shrimps and cherry shrimps can, in exceptional circumstances, live for up to two years, but one year is much more common.

As we’ve already mentioned, studies have shown that ghost shrimp don’t require brackish water or saline conditions of any kind to breed properly.

In fact, scientific research revealed that beyond 5 ppt (parts per thousand), the survival of ghost shrimp eggs declines dramatically.

What does make breeding more complicated in ghost shrimp is that their eggs hatch out into larvae rather than baby shrimps. These tiny larvae are so small that it can be hard to see them, and they tend to float around and become easy prey for your fish or even their parents!

Cherry shrimps on the other hand lay up to 70 fairly large eggs that hatch out after 25-30 days. The newly hatched shrimplets are fully formed, tiny versions of their parents which are more able to hide and fend for themselves than shrimp larvae.

Cherry shrimps are also less likely to hunt their own young than ghost shrimps.

In summary, cherry shrimps tend to be easier to breed, which can be a good thing if you want more of them, but a potential problem if you don’t have any predators to keep their population in check!

Because ghost shrimp produce vulnerable larvae which they predate, their numbers are less likely to get out of hand compared to cherry shrimps.

As a compromise, you could add some small, fast-moving fish like guppies which will be good at eating up some of your baby shrimp, while also leaving a few to mature.

If you want to breed either of these shrimp species successfully, you’ll need to provide lots of plants and hiding places for the young.

Cherries tend to be more expensive because of the breeding work that’s necessary to enhance their colors – less attractive specimens with a light pinkish color are sometimes discarded.

Can I Keep Ghost Shrimps and Cherry Shrimps Together?

Some aquarists have successfully kept ghost shrimps and cherry shrimps together, but others have experienced problems.

Since ghost shrimps are slightly larger and more assertive than cherry shrimps, they could potentially bully the latter species out of the tank.

To keep them together successfully, you’ll need to provide plenty of hiding places for your cherry shrimp to stay out of harm’s way.

Yes! Although species like cherry shrimps and ghost shrimps are quite undemanding, they still need clean water to remain healthy and happy.

Aquarium filters perform many important roles such as oxygenating the water, cleaning debris, and keeping toxic ammonia levels to a safe minimum. Without a filter or partial water changes, your aquarium shrimp would likely die within a few days.

Which is the best shrimp species for you depends both on your tank setup and your personal preferences.

Cherry shrimps are slightly smaller, with brighter colors than ghost shrimps. They have a slightly more peaceful temperament and are easier to breed.

On the other hand, ghost shrimp populations are less likely to get out of hand, and their slightly larger size makes them less vulnerable to being eaten by larger fish.

In general, the cherry shrimp is the more highly-prized of the two, but both of these species can make great pets that’ll also help to keep your aquarium clean.

If you’re looking for the ultimate invertebrate clean-up squad, however, look no further than Amano shrimps and Nerite Snails, who beat the other species hands down!

Check out in-depth our comparison between Cherry Shrimps and Amano shrimps here!