Amano Shrimp vs Cherry Shrimp: Which Is Better? 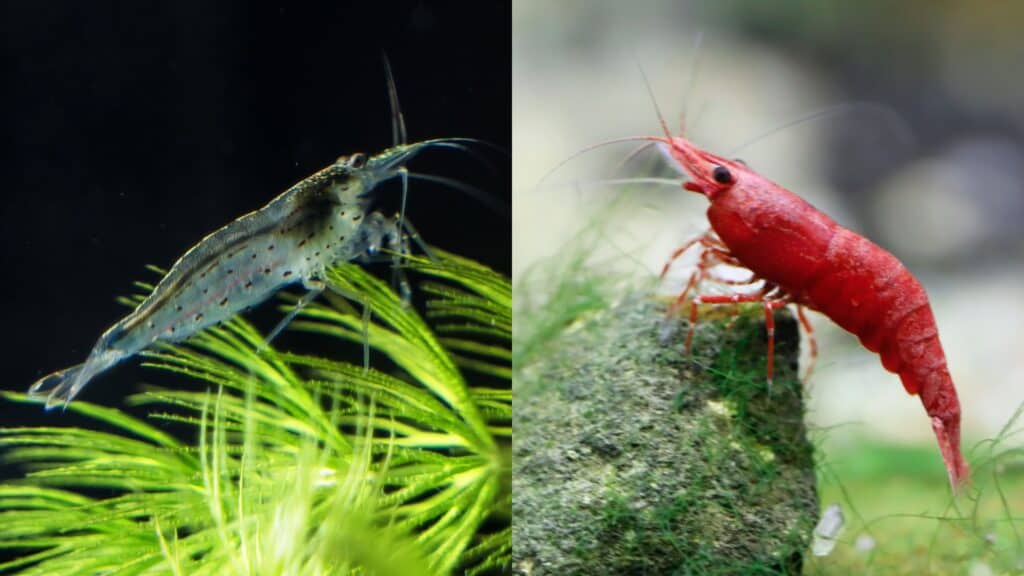 If you are deciding between Amano shrimp vs cherry shrimp, you have a tough choice to make.

As YouTuber Girl Talks Fish explains, comparing these two shrimp is like comparing apples to oranges.

Fortunately, each shrimp serves a different purpose, so your unique preferences should help with your decision.

The Benefits of Cherry Shrimp

Cherry shrimp are prized for their vibrant red color. They look great in planted aquariums and can add a pop of color to your tank.

They are also easy to breed and in demand at pet stores, so you may be able to make a profit breeding and selling cherry shrimp.

At the very least, many cherry shrimp keepers make enough money to support their shrimp-keeping hobbies.

The Benefits of Amano Shrimp

Amano shrimp are big and hardy. They are also wonderful algae eaters.

While Amano shrimp will help you keep your tank clean, they aren’t very colorful, and they are notoriously difficult to breed.

Luckily, they tend to live for a long time and make good tank mates for different kinds of nano fish (like bettas, mollies, etc).

Anecdotally, they also have very silly personalities and can be fun to watch.

What’s the Difference Between Amano Shrimp and Cherry Shrimp?

Otherwise, Amano shrimp have more voracious appetites than cherry shrimp, and the two shrimp breed differently, as well. Amano shrimp are much harder to breed in captivity.

While Amano shrimp don’t reproduce as easily, they tend to live longer, and Amano shrimp are better suited for tank mates.

Amano shrimp are also notorious escape artists, and they will jump out of your tank if they get stressed.

Cherry shrimp are less likely to leave the tank, but you may find them in weird places, like inside your filter on the cord of your heater.

The key to keeping both kinds of shrimp in your tank (as opposed to in your filter or on the floor) is to keep your water parameters in tip-top shape.

Ultimately, cherry shrimp and Amano shrimp have more similarities than differences. They prefer similar water parameters, have similar diets, and are both hardy, peaceful species that enjoy a planted tank.

Price shouldn’t be a deciding factor, either, because each shrimp costs the same amount, usually about $3 to $6.

Of course, if you want a fancy breed of cherry shrimp, it will cost you more, and Amano shrimp can sometimes be harder to find (because they are harder to breed).

Also, prices are constantly going up in the aquarium trade (and everywhere else, but that’s a different story).

Can I Keep Cherry Shrimp and Amano Shrimp Together?

They won’t crossbreed, nor will they harm one another.

The only thing to watch out for is the Amano shrimp’s appetite, as they might steal cherry shrimp’s food.

To make sure everyone gets enough to eat, spread shrimp food across the tank, and maybe add a little extra, so your cherry shrimp get a chance to chow down, too.

Do Cherry and Amano Shrimp Get Along?

Shrimp keepers agree that cherry and Amano shrimp “get along just fine.” One owner even noticed his cherry shrimp riding his Amano shrimp like a horse (haha)!

As we mentioned earlier, the only problem is that Amano shrimp can be a little aggressive when it comes to mealtime.

Also, cherry shrimp might have a hard time breeding within the presence of any tank mates, including Amano shrimp, because baby shrimp are very fragile.

Typically, Amano shrimp don’t eat cherry shrimp. If an Amano shrimp is starving, however, it may eat its smaller tank mates.

Amano shrimp won’t even eat baby cherry shrimp — on purpose, that is.

Unfortunately, baby cherries sometimes starve because they can’t get enough food within an Amano in the tank. There have been more than a few instances of Amanos accidentally inhaling baby cherries during their feeding frenzies.

More often than not, however, shrimp keepers who report Amano shrimp attacking cherry shrimp have accidentally misidentified a carnivorous whisker shrimp as an Amano shrimp.

If you put a whisker shrimp in your tank, it will eat any tank mate it can fit in its mouth, including other shrimp.

What Is the Best Shrimp for Eating Algae?

Amano shrimp are the best shrimp for eating algae. This applies not only when you compare them to cherry shrimp but also compared to many other species of aquarium shrimp.

Put simply, Amano shrimp are the best algae-eaters in the shrimp kingdom!

How Effective Are Amano Shrimp?

Amano shrimp are extremely effective algae-eaters. Some people even call them “algae-eating shrimp” because they are so good at it.

While 4 to 5 shrimp might not make a big difference, the more shrimp you have, the more algae they will eat. When one shrimp keeper had an algae infestation, he added 20 Amano shrimp to his tank, and it was algae-free two weeks later.

Pro tip: if you want your Amano shrimp to eat more algae, feed them a little bit less than normal. Just make sure they get enough protein so they don’t become aggressive toward other tank mates.

Cherry shrimp are good cleaners, too, but they are too small to be super effective.

Still, they will eat algae, uneaten fish food, and even debris like fish poop, which means they will be helpful in keeping your tank clean.

When kept by themselves, cherry shrimp colonies are pretty self-sustaining, and they reproduce quickly. Many cherry shrimp keepers end up selling batches of shrimp for profit!

Are Amano Shrimp Hard to Keep?

Amano shrimp are fairly easy to keep because they don’t need much care and maintenance.

Nevertheless, Amano shrimp are hard to breed, and for many years, shrimp keepers thought breeding in captivity was impossible.

In reality, Amano shrimp larvae can only survive in brackish water, which is especially difficult because Amano shrimp themselves live in freshwater.

Are Cherry Shrimp Hard to Keep?

Cherry shrimp are so easy to breed and care for that they are some of the most popular shrimp in the aquarium hobby.

Many shrimp keepers love cherry shrimp because they constantly replenish themselves, and breeding cherry shrimp can bring in enough money to support your tank and make a small profit.

Of course, cherry shrimp are a little smaller and more delicate than Amano shrimp, so they have a more limited list of appropriate tank mates.

What Kind of Tank Mates Should I Keep with Shrimp?

Many fish view shrimp as food, so you need to be careful about the tank mates you keep with shrimp.

As a general rule, if a fish can fit a shrimp in its mouth, it will eat said shrimp.

Also, due to the difference in size, Amano shrimp and cherry shrimp need different tank mates.

If you’re not careful, cherry shrimp will become a snack. Additionally, cherry shrimp may have trouble breeding and keeping their babies alive with any tank mates.

If you want to breed cherry shrimp, the rule of thumb is to keep them by themselves. Even snails will eat or outcompete baby cherries!

Outside of breeding, cherry shrimp can get along with the following:

Do not put any large, predatory, or aggressive fish in the tank with your cherry shrimp, or they will end up being dinner.

Even betta fish have a track record of killing and eating cherry shrimp.

Amano shrimp are bigger, but they are still shrimp and can be mistaken for food.

To keep your Amano shrimp safe, opt for tank mates like:

While you can house Amano shrimp with peaceful, small to mid-size fish, and some Amano shrimp can hold their own with some betta fish, there are still some species you should avoid.

For example, no cichlids, Oscars, or goldfish.

If one of these species attacked your Amano shrimp, it would be all over for the little guys.

Should I Get Amano Shrimp or Cherry Shrimp?

Well, it depends on what you are looking for.

If you want a beautiful addition to your tank or a hobby that supports itself, go with cherry shrimp.

If you want a bigger, hardier crustacean that can be housed with more interesting tank mates, or you would prefer a world-class algae eater, opt for the Amano shrimp instead.

At the end of the day, both shrimp are sturdy and easy to care for, and they can even live together if necessary (though cherry shrimp may have a harder time breeding in this living arrangement).

While you might get more out of a vibrant tank with cherry shrimp alone, Amano shrimp have voracious appetites and can help keep any shrimp-safe tank clean.

Further, if you need to clean up an algae outbreak, adding a big group of Amano shrimp to your aquarium might just do the job.

Many aquarium hobbyists prefer Amano shrimp because they work harder, are more versatile, and live longer. They aren’t much to look at, but they have unique personalities and eat so many algae it’s unreal.

People who are particularly into shrimp keeping may prefer having a breeding tank of cherry shrimp. Cherry shrimp are brightly colored and beautiful, and there are even shrimp breeding competitions, so you could get yourself a prize-winning fish.

Remember, there are more similarities between these species than there are differences, and they prefer similar diets and water parameters.

If you really can’t decide, you could always create a tank with both cherry shrimp and Amano shrimp. You could even add in some freshwater snails and a few small tetras for variety.

Just be sure everyone stays healthy and gets enough food, and keep the water comfortable so you don’t have any escapees.

Based on my research and personal experience, if I was starting a tank today, I would get a tank of cherry shrimp.

It would be so fun to pair them with some bright green moss and give breeding them and selling them a shot. Plus, the thought of having a self-sustaining tank is extremely appealing to me.

If I wanted to add some shrimp to my existing tank, on the other hand, I would absolutely choose Amano shrimp. I like that they are so hardy — and that they clean up algae. Additionally, every shrimp keeper seems to have a story about their crazy antics and long lifespans.

Personally, I don’t think I would house the two shrimp together, but if I was feeling really ambitious, I might add some snails to one tank or the other!

No matter what, you can’t go wrong with adopting some shrimp.

If you need tips, you can always check out our care sheets, and our comments are open — we can’t wait to hear how your shrimp-keeping adventure goes!