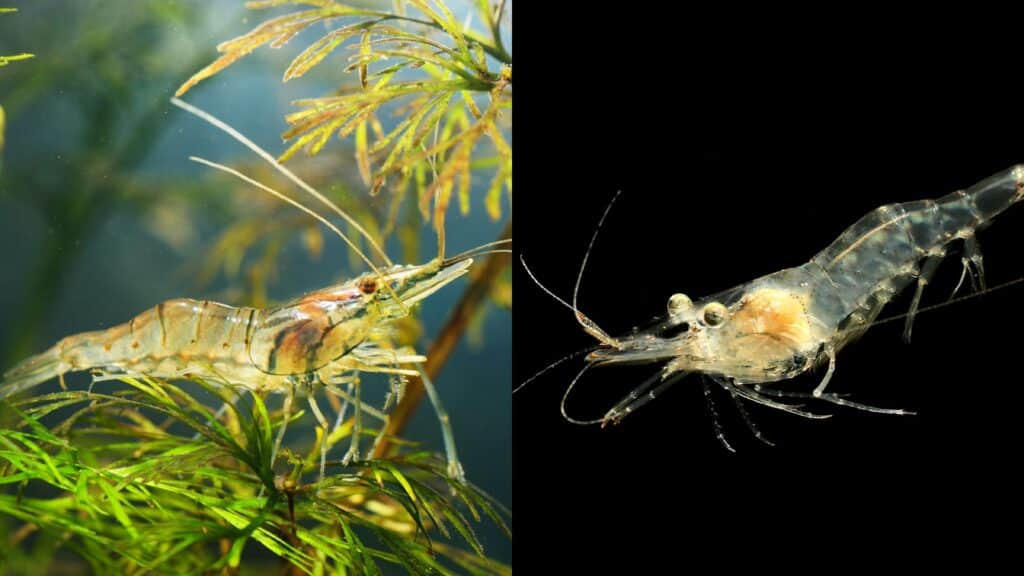 Whisker shrimp and Ghost shrimp are both popular aquarium shrimp species from the Palaemonidae family of shrimps. Some of their relatives live in seawater, but whisker shrimps and ghost shrimps are both freshwater shrimps.

While the two species look remarkably similar, they actually live on opposite sides of the world! The Ghost shrimp is from North America, whereas the whisker shrimp hails from the lowland rivers of Nepal.

Since these two shrimps are so easily confused it’s important to understand the differences between them so you can choose the right species for your tank.

The most obvious similarity between whisker shrimps and ghost shrimps is that they look incredibly alike. Both species have beautiful, glass-like transparent bodies, and similar anatomy. The main difference you’ll find between the two species is in their antennae. Whisker shrimp are so-called because of their particularly long antennae, which are substantially longer than that of Ghost shrimps.

Ghost shrimps on the other hand have orange bands at the base of their legs and antennae, which is lacking in whisker shrimps.

Both whisker shrimp and ghost shrimps have quite similar requirements when it comes to water conditions. They both prefer a neutral to slightly alkaline water of 7.0 – 7.8 with a general hardness of 2-14 dGH. Their preference for fairly neutral water makes them compatible with a wide range of fish species.

There’s a significant difference between these two shrimp when it comes to temperature.

Whereas the whisker shrimp comes from the truly tropical waters of lowland Nepal with a range of 72 – 82 Fahrenheit, ghost shrimps hail from more temperate waters of North America, and can tolerate temperatures as low as 50 degrees Fahrenheit. They’ll be much happier in temperature ranges from 65 – 82° F though, and both species prefer a water temperature that’s relatively stable.

Their temperature preferences make a big difference when it comes to keeping these shrimp because whereas whisker shrimp will definitely need a heater, ghost shrimp can also be successfully kept in a cold water aquarium.

Both of these species of shrimp will enjoy a tank setup with plenty of live plants, rocks, and caves to hide in, and can look very attractive grazing algae from pieces of driftwood.

Whisker shrimps and ghost shrimps both like a gentle current, so a HOB or internal power filter is ideal to create some water flow.

Being translucent, and sometimes referred to as ‘glass shrimps’ these shrimps can be difficult to see, but a dark substrate like black gravel is useful to make them stand out more clearly.

One of the most popular reasons for keeping shrimps is their amazing ability to keep your tank clean. Most species of shrimp just love hoovering up any pieces of uneaten fish food that have fallen to the bottom of the tank and are especially good at cleaning algae and biofilm off of rocks, plants, gravel, and glass.

Whereas this is true of ghost shrimps, whisker shrimps tend to be rather more carnivorous, and don’t do such a good job of cleaning aquariums compared to algae-loving ghost shrimps.

Both of these species are very easy to feed though, and will happily munch away on any dried, fresh, live, or frozen foods that find their way to the bottom of the aquarium.

If you don’t have a lot of algae growing in your tank, then these shrimps will benefit from being fed additional algae wafers too.

One of the biggest differences between whisker shrimps and ghost shrimps is their temperament. Most freshwater shrimp species are renowned for being peaceful critters that are very benevolent toward other fish and invertebrates in a fish tank.

While this is a fitting description of ghost shrimps, the same could not be said for their cousins the whisker shrimp!

Whisker shrimps are famous for having quite an aggressive temperament and may even prey upon smaller fish and invertebrates in the tank.

In a community tank setting, the different temperaments of these two species are one of the most important factors to think about when weighing up which shrimp you’d like to choose.

The size and temperament of these two species inform which types of tankmates you can keep with them.

Since whisker shrimps can be quite aggressive and even predatory, it’s important to choose tank mates carefully. Any healthy fish over 2 inches in length should be relatively safe from them, but the smallest of nano fish like Galaxy Rasboras, Ember Tetra, and Pygmy Sunfish may be better avoided.

Delicate species such as betta fish are also probably better off without whisker shrimps in the tank, and you’d better think twice before trying to raise fish fry in the tank with this carnivorous shrimp!

Smaller species of shrimp including ghost shrimp may also be at risk from attacks by whisker shrimp, and whisker shrimps can sometimes also be aggressive towards their own kind.

Ghost shrimps on the other hand are far more amenable when it comes to tankmates. Being very peaceful in nature, they can be excellent companions for smaller fish species such as guppies, tetra, and betta fish. Ghost shrimps can also be successfully kept in groups so long as each individual has plenty of space to stake out their own territory.

Both of these species are relatively small shrimp though, so larger fish like oscars and clown loaches are not compatible tank mates for either of them.

Most freshwater shrimps are incredibly easy to keep, but whisker shrimp may require a little more attention to make sure they’re not posing a threat to your other aquarium inhabitants!

Ghost shrimp on the other hand are very peaceful shrimp and are ideal for beginners in many ways.

One downside of keeping ghost shrimps is that they have one of the shortest lifespans of any aquarium shrimp. Living for only one year at most in normal circumstances, you’ll have to get used to saying farewell to your beloved pet shrimp on an annual basis!

If you’re having trouble keeping your shrimps alive for longer periods of time, be sure to check out this helpful video on the reasons this might be happening and ways to remedy the potential problems.

Both of these species of shrimp can be attractive to keep in different ways.

If you’re looking for a small, peaceful shrimp that’s good at cleaning your aquarium but won’t bother your fish, then look no further than the ghost shrimp.

If, on the other hand, you’re looking for a shrimp that’s a little bit bigger, more robust, and longer lived, then the whisker shrimp could be the better choice.

Overall, I’d have to say that the ghost shrimp is deservedly the more popular of the two species since it is such an easy-going shrimp species, an excellent tank mate in a community aquarium, and is ideal for beginners.

Ghost shrimps also have the advantage that you can keep them in cold water without a heater and are beaten only by Amano shrimps and nerite snails in their ability to clean a fish tank of algae.