Fish Evolution: How Fish Became One of Earth’s Most Successful Creatures 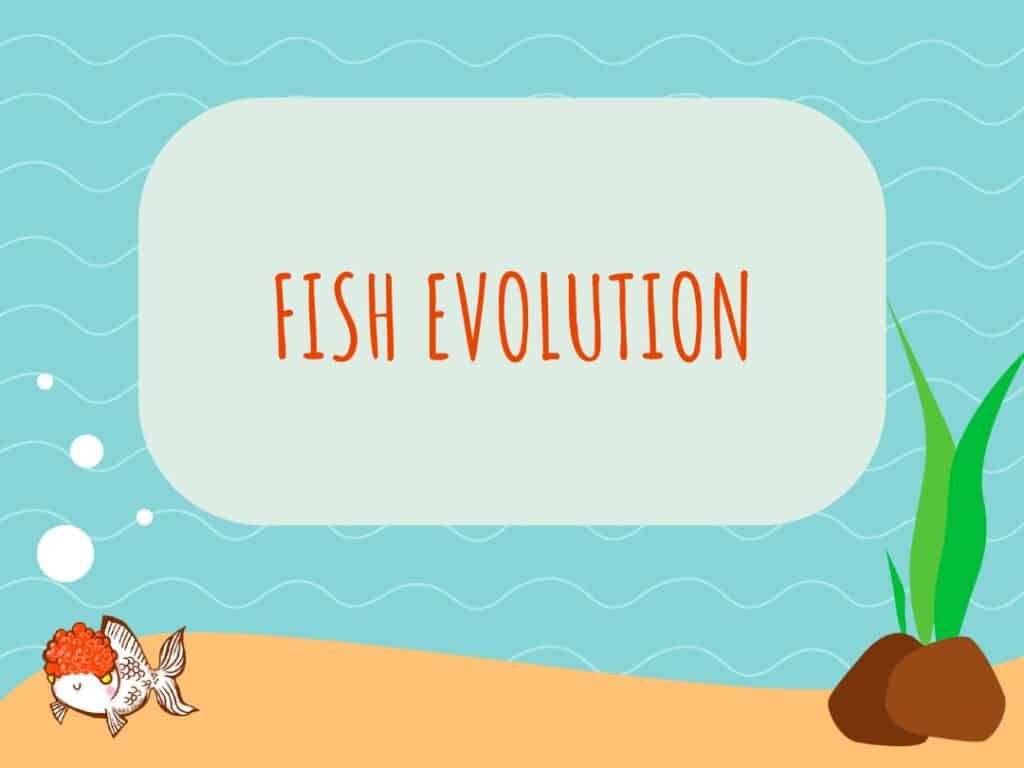 Did you know that sharks are older than trees?

There are 33,000 known fish species today, but it all started with only a few.

Keep reading to find out all about fish evolution and how some of the most beloved species of aquarium fish came to be!

As far as we know, the first fish evolved 530 million years ago. This was the Cambrian Period when a large explosion of evolution happened, leading to the beginning stages for most known animals today.

What Was the First Fish?

The very first fish, referred to as agnathans, was extremely primitive. According to fossil records, this was a jawless fish in the Agnatha infraphylum.

These fish used their jawless mouths to search the early sea bed for food. They likely had heavily armored scales that protected them from bigger predators.

Eventually, agnathans evolved, and populations declined; it is possible that jawed fish outcompeted their jawless fish predecessors. This led to the only remaining relatives of these fish, lampreys, and hagfish.

How Did Fish Evolve?

The development of a jaw structure changed how fish interacted with their environment.

Instead of relying on sentient animals and plants to eat on the sea bed, fish were able to chase down prey as active predators in more open waters.

From there, specific species evolved with natural selection. Optimized environmental adaptations through the generations resulted in more successful offspring, leading to the array of behaviors and characteristics seen in fish today.

Initially, there were four groups of jawed fish dating back to 420 million years ago:

Placoderms were heavily-armored prehistoric fish. It is believed that they were the first fish–or among the first fish–to develop teeth and pelvic fins, the latter of which led to the evolution of hindlegs.

It is not exactly known why Placoderms went extinct, but they were likely outcompeted due to their sluggishness compared to newly evolved species.

Acanthodians were another prehistoric fish that went extinct. These small fish closely resembled sharks in body shape but shared some features with the typical bony fish we know today, Osteichthyes.

Interestingly, most Acanthodians started as marine species. With evolution, they moved to be exclusively freshwater fish.

Acanthodians went extinct during the Great Dying of the Permian era 250 million years ago when about 95% of the planet’s population died due to raised atmospheric temperatures that depleted oxygen in the ocean.

Past this point, only the Chondrichthyans and Osteichthyes survived and evolved.

Chondrichthyans include sharks and rays and a few other odd additions, such as the deep sea rabbit fish (chimaeras). Osteichthyes, refer to many of the freshwater and saltwater fish we keep in our modern aquariums.

Osteichthyes is a scientific class comprised of bony fish. Of the over 33,000 known species of modern fish worldwide, bony fish make up the majority, with about 28,000 members.

The specific traits of Osteichthyes include:

These fish are largely cold-blooded, which means they depend on the surrounding water temperature to regulate their bodily functions and processes. Though some species, like tuna, can generate their own heat.

The Osteichthyes class are three subclasses: Dipnoi, Crossopterygii, and Actinopterygii. From these three, nearly all aquarium fish belong to the Actinopterygii subclass.

Actinopterygii is a subclass of bony fish and some of the planet’s most recognizable fish. But first, we must understand what makes them different from the other subclasses.

The other two subclasses are Dipnoi and Crossopterygii. These fish are known as Sarcopterygian fish or lobe-finned fish.

Dipnoi are known as lungfishes. These fish have to unique ability to breathe atmospheric air. They are recognized for their fused upper jaws, teeth, and modified swim bladder.

Crossopterygii is known as the coelacanths and is ancient fish. These primitive fish were considered extinct until their rediscovery in 1938; they remain critically endangered. They have specialized scales, called cosmid scales, that act as armor.

In contrast to the other subclasses, Actinopterygii might seem like plain fish. They are mostly characterized by the presence of ray structures in their fins, making them known as ray-finned fish.

These fish are found in marine, freshwater, and brackish water systems in oceans, lakes, rivers, and streams. Many of them resemble the typical aquarium fish appearance.

From the Actinopterygii subclass, fish are split into even more specific groupings, eventually leading to a genus and species binomial name. Aquarium enthusiasts have given many species common names that better match the appearance of the fish–and are easier to spell!

Fish today come in all shapes, colors, and sizes. Over millions of years, environmental conditions and changes have shaped fish species into what we see today.

Each surviving adaptation has been proven to increase the likelihood of reproduction and subsequent survival. Scientists have long studied the progress of natural selection and evolution to understand why some traits work better than others.

Here are some of the key steps in fish evolution.

Why do fish look the way they do? Why are some fish bright colors while others are plain? Why can one fish grow several feet long while another grows to be less than an inch?

These are important questions to ask. They can help understand how ecosystems operate, which then allows aquarium hobbyists to replicate those environments in their home display.

The truth is that evolution continuously happens and results from millions of years of trial and error. Some key patterns and consistencies have been discovered, though.

Going into aquarium stores, you’ll immediately notice the difference between freshwater and saltwater fish. Saltwater fish are simply more colorful and vibrant than their freshwater counterparts. But why is this?

For both freshwater and saltwater fish, color helps with camouflage and protection.

Freshwater systems are usually dark and muddy. Colors reflect the natural tones of the environment, usually consisting of browns, greens, and yellows. Why are some fish, like the neon tetra, so bright if that’s true?

Another color factor that comes into play is schooling behavior. Fish need to be able to see each other while still being protected from predators.

It is believed that the red and blue stripes of the neon tetra allow fellow fish to recognize each other. At the same time, the silver in between these stripes may be used to catch and reflect the light, making the fish nearly invisible and confusing to predators.

In the same way, large schools of open-water marine fish, like sardines, use silver to become invisible in the water column. Of course, the size of the school also provides better protection.

Natural tones make sense, but how are some marine reef fish so colorful, then? We must remember that fish don’t see the same way as we do due to the construction of their eyes and how light changes with water depth.

It is strongly believed that reef colors result from better intraspecies identification, successful protection from predators, and even attraction to predators in certain cases. Some key features, like stripes and spots, help the fish blend more into their environment.

Often, colors also serve as a warning sign to predators, like the bright yellow venomous foxface rabbitfish (Siganus vulpinus). Some fish might even replicate these warning colorations in the act of Batesian mimicry.

This is a tactic used by generally harmless fish to look the same as the more dangerous ones.

Fish come in all shapes and sizes. Each size of fish fills a niche within their ecosystem: big fish eat small fish, which eat other smaller organisms.

At the same time, size is determined by the available resources of the environment, namely food.

You can tell a lot by how a fish looks. A few shapes are elongated, flat, and eel-like, with the compressor being the most common silhouette in the aquarium hobby. Again, each shape aids in the survival of the fish and the species.

For example, fast fish, like sailfish (Istiophorus spp.), have very aerodynamic, torpedo-shaped bodies that help them achieve top speeds of over 60 mph (97 kph) to hunt for prey.

Other venomous fish, like the stonefish (Synanceia spp.), do not need to move fast and are stockily built to protect themselves from above while safely living on the substrate.

This brings us to another point of evolution: poison and venom.

Nearly 3000 fish use venom and poison for defense, but the evolution has been poorly studied. It is understood that venom and poison give the prey an escape window to escape from the predator.

It makes sense that spines and other body modifications that could inject a toxin would evolve after years of predation. What makes less sense is how the venom or poison evolved to be there.

The leading argument is that these toxins evolved from natural secretions from the fish’s skin. Because most fish have several different predators, and each toxin has a different effect on those predators, it is difficult to pinpoint the exact cause of the evolution.

Poisonous and venomous fish did not all evolve together, which led to the wide variety of tactics and toxins we see today.

Where Did Fish Evolve?

Now that we know how fish evolved, where was this all taking place?

The ocean is a big place and looked different 450 million years ago than today. The continents were still separating, and the ocean was vast.

However, fossil records are limited past a certain point, and scientists have long wondered where fish evolved in such a huge space.

It is strongly believed that fish evolved in shallow coastal waters over the course of 100 million years (480 million to 360 million years ago). This contrasts the previous belief that life stemmed from deeper coral reefs.

It is not entirely understood how shallow waters could have been more beneficial than deep-sea life, but water chemistry and available oxygen may have played a big part.

With this knowledge, scientists examined how fish eventually moved away from coastal areas into deeper parts of the oceans and up into river tributaries.

Stronger and more flexible swimmers, like jawless thelodonts, moved out to sea while the other more sentient species evolved for more shallow conditions in freshwater and saltwater environments.

33,000 fish all evolved from just a few. There are millions of years of evolution between the fancy goldfish in your aquarium and the first primitive fish, but the basics have stayed the same.

If you have any questions about fish evolution, the evolution of other marine or freshwater organisms, or have looked into the past yourself, don’t hesitate to leave a comment below!