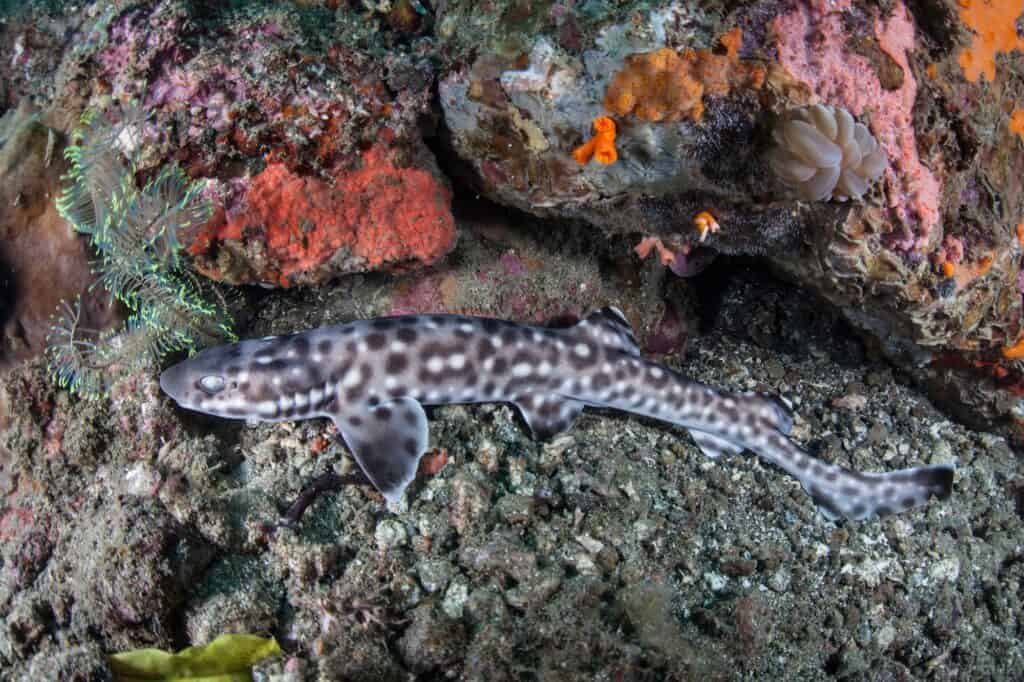 While you may have seen sharks at the public aquarium before, you might not know that you can get some of these same sharks for your home aquarium, in particular, catsharks! Before you impulse buy a shark though, make sure to take a few months familiarizing yourself with their requirements as they can be much more demanding than any species you’ve ever owned before, namely in space, tank setup, diet, and water parameters.

But if you really want to take the several hundred-gallon commitment of owning a catshark, keep reading to find out a little more about the three most popular species in the aquarium hobby and how to care for them!

True catsharks belong to the Scyliorhinidae family, which is the largest family of sharks with over 100 species; they are categorized as ground sharks as they stay near the seabed, feeding on invertebrates and passing fish.

These sharks are generally small and stay under 2.6 feet (79.2 cm) long when fully grown, with a few species growing a few feet longer. They get their common name after their elongated eyes that resemble those of a cat.

Most catsharks are found in the warmer regions of the world at a wide range of depths, specifically around Australia and Africa. Like many sharks, catsharks lay eggs which are sometimes available in the aquarium trade to raise and hatch.

Many species of catshark are not endangered. However, some species, like the coral catshark (Atelomycterus marmoratus), are labeled as near threatened by The IUCN Red List of Threatened Species. This is mainly due to bycatch from the fishing industry as well as mining and quarrying impacts affecting their natural ecosystems.

While these shallow-water sharks are not endangered just yet, some conversation measures need to be taken to ensure the longevity and prosperity of wild populations.

Catshark species in the aquarium

It should be noted that in the aquarium trade, there are many species that carry the common name ‘catshark’; if a shark does not fall into the Scyliorhinidae family, then it is not a true catshark. Sometimes, bamboo sharks, like the whitespotted bamboo shark (Chiloscyllium plagiosum), may be incorrectly labeled.

Remember that for all sharks, it’s recommended to have a net or other covering to keep the shark from jumping out of the aquarium.

Probably the most common catshark you’re bound to come across is the coral catshark (Atelomycterus marmoratus). These sharks come from the western Indo-Pacific, around India, Malaysia, the Philippines, Japan, and many other Southeast Asian countries. There, they live in the shallow coral reefs where their long and slender bodies are able to fit in between the rocks and crevices to search for food.

This species is largely nocturnal and remains relatively inactive during the day. It can grow to be about 2.3 feet (70.1 cm) and can be identified by its speckled black and white spots against its greyish-brown body; some spots that are closer together may form lines or bars. This shark may also have noticeably white tips on its two dorsal fins and a white line across its gills.

While coral catsharks are not overly active swimmers and like to stay hidden during the day, they still have the ability to grow to over a couple of feet long; also keep in mind that each shark will have its own personality, and yours might enjoy swimming right under the surface of the water all day every day!

Because of their potential size, at least a 300 gallon (1136 L) aquarium is recommended. The water temperature should be maintained between 72-78° F (22.2-25.6° C). Sharks can be especially sensitive to nitrites and nitrates, so it’s important to keep all parameters in check and at stable levels.

As these sharks are naturally from coral reefs, they may be housed with larger corals. It is best to replicate their coral reef habitats with large rock formations and a soft sandy substrate; all rockwork should be secured in order to prevent injury to the shark. For tank mates, it best to keep larger, more active fish that won’t be mistaken as food. Some potential tank mates could be angels, tangs, damsels, and eels.

With catsharks in general, it’s important to provide a well-varied diet with adequate nutritional value. Hobbyists like to feed frozen seafood, like silversides, squid, krill, shrimp, mussels, and other mollusks. It will also be necessary to supplement vitamins, like Selcon Vitamin Fish Food Supplement.

If purchasing a coral catshark egg case, it can take up to 5 months to hatch.

These sharks have a very small natural range, and can only be found off the northern and western coasts of Australia. They can be found on rockier substrates, but also like sand as well. Australian marbled catsharks can grow up to 2 feet long (61.0 cm) and have similar white and dark blotches like the coral catshark, along with two dorsal fins. However, their base coat tends to be darker greys and brown, and some darker bands are sometimes apparent across the body.

While the Australian marbled catshark grows slightly smaller and is just as nocturnal as the coral catshark, a 300 gallon (1136 L) or more aquarium is the bare minimum. While they can be found on rockier substrates, most hobbyists choose to stay with soft sands to decrease the risk of injury.

Your shark will need lots of cracks and crevices to hide in throughout the day. The rockwork should be firm and preferably epoxied so that there is no chance of them falling over onto the shark. Otherwise, a very strong filter is needed to keep nitrates low as sharks can be messy eaters and contribute a lot of waste to the system. Water temperature should remain constant between 72-78° F (22.2-25.6° C).

Australian marbled catshark diet should be full of variety with supplemented vitamins. Pieces of fish, shrimp, squid, and even some crabs every once in a while will make sure that your shark is getting the diet it needs.

The banded sand catshark is the smallest and the lightest-colored one out of these three species. This shark comes from similar waters as the Australian marbled catshark and is endemic to the western Indo-Pacific around northern and western Australia. There, they can be found on mud, sand, or sand intermixed with shell substrate.

The banded sand catshark can grow to a maximum of 1.47 feet (44.8 cm) long when fully grown, with many male and female adults averaging only 1.0-1.3 feet (30.5-39.6 cm). These sharks have a very light tan base coat with alternating darker bands of greys and browns. They will also have random black spots and markings across their body; like the previous sharks, the banded sand catshark has two dorsal fins.

Banded sand catshark care is also similar to the other species in terms of aquarium requirements and diet. A minimum tank size of 300 gallons (1136 L) is recommended, with even bigger being better. They can be fed an assortment of fish and other invertebrates as long as they are also provided with the right vitamins and supplements.

Sharks are some of the coolest and most interesting animals on this planet, and the catshark allows hobbyists to bring that wonder of the ocean into their own homes. However, these sharks are an incredible amount of work. They do best in several hundred-gallon tanks, need a specific diet, and can create a lot of nitrates that can easily affect their health.

However, if you’re able to replicate the Indo-Pacific waters of the coral catshark, Australian marbled catshark, or banded sand catshark, then your home reef will capture a glimpse of their true ecosystems.

If you have any questions about any of these species of catshark, other types of shark, or have had experience keeping a coral catshark, Australian marbled catshark, or banded sand catshark, don’t hesitate to leave a comment below!