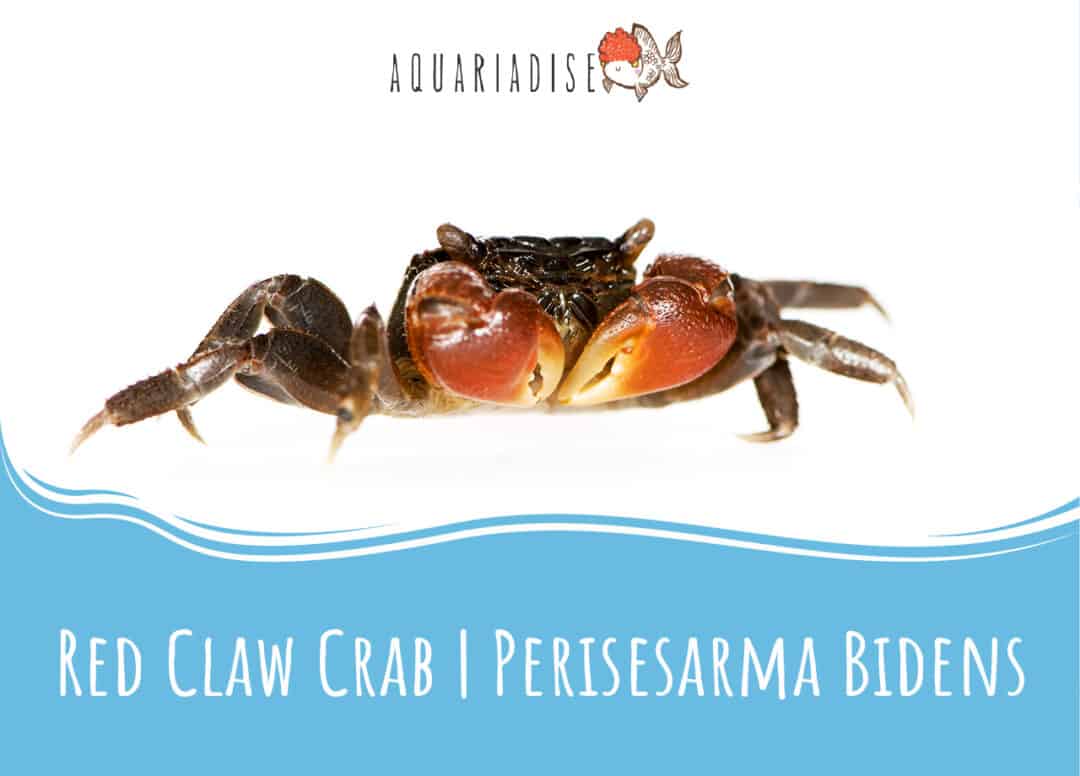 If you’re looking for an interesting, quirky pet and you fancy a change from keeping tropical fish, you might consider the Red Claw crab.

These attractive little creatures are often kept in freshwater community tanks. However, the crabs’ natural habitat is brackish bodies of water. These aquatic animals don’t play well with others and are best-suited to a single species paludarium.

Keep reading to learn everything you need to know about keeping Red Claw crabs and setting up a suitable home for them.

The Red Claw Crab is also known as the Red-Clawed crab and the Mini crab. Sometimes, the creatures are also referred to as Sesarma bidens or (pseudo) Sesarma moeshi.

Red claw crabs are naturally found in mangrove swamps in Asia. In these estuaries, rivers flow into the sea, creating a mix of fresh and saltwater. The water is relatively shallow, temperatures are tropical, and the ground is usually covered with fine sand.

All this provides you with some excellent guidelines for creating the perfect environment in a red claw crab paludarium.

These beautiful little crabs are smaller than other aquarium crab species, and grow to measure just 4 inches, including their leg span. The actual carapace of the creature is much smaller than that, measuring just 2 to 2.5 inches wide.

The crab’s body and head are shades of dark brown camouflaged with spots. On the corners of the head are two bulging eyes set on antennae. The crab has ten legs, eight of which are used for walking around on the substrate and for climbing. The other two legs end in large, bright red claws tipped with yellow or orange.

Although all Red Claw crabs have the same basic coloration, each individual is slightly different in the intensity of color and shade.

Male and female crabs look slightly different. It’s imperative to tell the difference between them, as you don’t want to have more than one male crab in your tank. These critters are aggressive, and males will not tolerate each other, often fighting to the death.

Males typically have larger claws and have more vivid coloration. On the underside of the crab is a small flap. In males, the flap is pointed, whereas with females, it’s rounder and broader, and they have darker claws.

You can expect your crabs to live for between two and two and a half years with proper care and a high-quality diet.

Although Red Claw crabs can survive in a purely freshwater tank environment, they won’t thrive, and they certainly won’t live for very long. So, you need to set up brackish water conditions or paludarium for these creatures.

In this section of our guide, we explain how to care for Red Claw crabs.

If you plan on keeping Red Claw crabs, you should house them in an aquarium tank of at least 10 gallons. Although these crabs are pretty small, they can be very territorial and aggressive, so the more space they have, the better.

A 10-gallon tank is large enough to house a single male crab and two females. If you want to keep more, then you need a larger tank. An overcrowded tank does not make for happy crabs.

However, ideally, these semi-aquatic crabs should be kept in a paludarium. A paludarium basically features underwater and dry land environments, which is a perfect tank setup for the semi-aquatic Red Claw crabs. Your paludarium should measure around 24 inches wide.

Make sure that your tank has a tightly fitting lid, and be sure to plug any gaps, as these active critters are accomplished escape artists. The crabs musn’t get out of the tank, as they need access to water to survive, and they will die if they become dehydrated.

If you have an internal filtration system, you’ll need to cover the intake and outflow, as the crabs will surely find their way inside if you don’t!

Just like fish, crabs need a tank that has an efficient filtration system that’s adequate for the tank size and water volume.

A marine-specific filtration system is the best choice, as that will cycle the water without impacting the salinity level too much. To keep things on an even keel, carry out a 10% water change every week.

The most important aspect of Red Claw crab husbandry is providing the correct water parameters that closely replicate what the crabs are accustomed to in nature.

Wild crabs live in the shallow, tropical, brackish waters of the coastal mangrove swamps where the water quality is hard and slightly alkaline. You can achieve the salinity the crabs need by adding a small quantity of marine salt to the water. Ideally, the water should be about one-sixth of the salinity of seawater.

The ideal water parameters for Red Claw crabs are:

Be sure to test the water parameters at least once a week using an aquarium water testing kit and make any necessary adjustments.

As previously mentioned, Red Claw crabs are happiest and more likely to thrive when kept in conditions that closely replicate their natural habitat.

In the case of these semi-aquatic crabs, the ratio of water to land should be roughly 3:1. So, you want mostly water with some raised land surfaces that the crabs can climb up onto.

The best substrate for Red Claw crabs is sand. These critters love to burrow, dig, and scavenge, so sand is a soft, safe material for them.

If you’re creating a habitat for the crabs in a standard fish tank, you can build a landmass from the sand or use special floating perches instead. Most purpose-built paludariums contain shelves that you can landscape if you decide to take that route.

When choosing decorations for the tank, rocks and driftwood are a good choice, and you should also include some caves that the crabs can use as shelter.

Several times during their life, the crabs go through a molting process when they outgrow their shells. The new carapace takes a few days to harden, during which time the crab is very vulnerable to predation and attack from other crabs. So, you need to provide dense planting, caves, upturned plant pots, and the like that the crabs can hide in while their new shell hardens.

If you notice a molted shell in the tank, leave it there for a few days. Sometimes, the crabs eat the shell as a source of calcium, which is essential for their shell health and growth.

Although live plants are an excellent addition to any fish tank or paludarium, Red Claw crabs are destructive and will uproot and shred your plants. So, either use tough plant species or silk ones instead.

Red Crabs are fun to watch, but they can be somewhat skittish, and they tend to be nocturnal, spending much of the daylight hours hiding away.

You can sometimes encourage the crabs to become more active during the day by using moonlighting if you have that option on your aquarium lighting unit. When the crabs do show themselves, you can enjoy watching them scavenging, digging, burrowing, and generally exploring their environment.

If these crabs feel threatened, they will raise their claws in a gesture of aggression toward whatever critter has alarmed them. That could be your finger if you’re carrying out tank maintenance!

Red Claw crabs are pretty feisty characters that can be very aggressive toward other crabs and fish. That’s mainly because the crabs are very territorial, and they will fight to the death.

These crabs have even been known to kill fish and other invertebrates, so make sure you don’t overcrowd the habitat and provide lots of hiding places that the crabs can claim as their patch.

What Are Good Tank Mates For Red Claw Crabs?

Since these crabs are aggressive and live in brackish water, your choice of compatible tank mates is somewhat limited.

However, you can keep Mollies, Flagfish, and larger species of gobies relatively safely with Red Claw crabs. We recommend that you don’t keep any other species of freshwater crabs in the same tank as Red Claw crabs, as that’s almost certain to end in disaster.

Can Red Claw Crabs Live Together?

Yes, it is possible to keep a few Red Claw crabs together, provided that you have a large tank with plenty of space and hiding places.

Ideally, you should keep one male to two females. Never keep multiple male crabs in the same tank. They will fight until only one remains!

Although red claw crabs do actively hunt, they are not strict carnivores.

A healthy red claw crab diet should include plenty of protein such as bloodworms and small pieces of uncooked fish or prawns. That should be supplemented with a variety of food, including veggies such as leafy greens, peas, and spinach.

Red Claw crabs will usually also eat regular fish food and algae pellets. You should also include commercial crab food, such as Hikari crab cuisine, in the crabs’ diet, which should help supply them with enough calcium to grow and molt successfully. 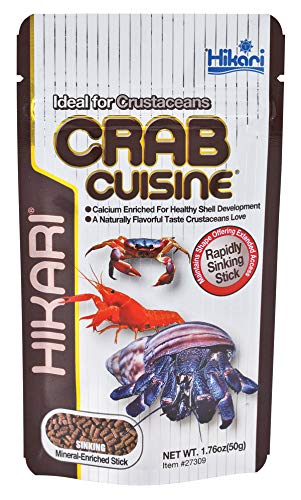 How Often Do You Feed Red Claw Crabs?

These critters are scavengers, foraging around the tank and picking up whatever scraps of food they can find.

To prevent the water from becoming polluted, offer the crabs food once a day and remove anything that’s not been eaten after a day or so.

Red Claw crabs are hardy creatures that are very resistant to most diseases that can affect crustaceans. They will even eat sick or dead fish without contracting any form of disease themselves.

That being said, these crabs can suffer from fungal and bacterial infections, and parasites may occasionally attack them. However, thankfully, such instances are pretty uncommon.

You musn’t overcrowd your crabs’ tank. Overcrowding causes stress, which increases the chances of the Red Claw crabs becoming sick. Generally, if you keep the tank clean and keep up with your regular water changes, the crabs should remain healthy.

Unfortunately, breeding Red Claw crabs in the home aquarium or paludarium environment is pretty much impossible to achieve.

Some hobbyists report seeing their crabs spawn in tanks. However, any eggs that are produced generally don’t hatch, and those that do usually die off very quickly. Juvenile crabs start life as larvae, meaning that they are very vulnerable to predators.

And like most crab species, Red Claw crabs don’t display any parental behavior at all. The parents will often eat the larvae, so your baby crabs chances of survival is, sadly, virtually nil.

Red Claw crabs are readily available to buy in your local fish store and online.

Before you choose your pet crabs, double-check their sex so that you don’t end up with more than one male. Also, look very carefully to see that the crabs do not have any signs of injury or damage and that all their legs are intact.

You can expect to pay around $10 per crab, depending on where you buy them.

Red Claw crabs are a fascinating species of crustacean that can make a nice addition to a single-species tank or paludarium with a few suitable tank mates.

These are semi-aquatic crabs that must have access to land if they are to thrive. Also, although Red Claw crabs are frequently sold as freshwater species, they actually hail from brackish coastal waters.

These interesting little creatures can make great pets if you keep them in the proper environment and provide them with a diet that contains sufficient calcium and nutrients for a healthy shell and growth. 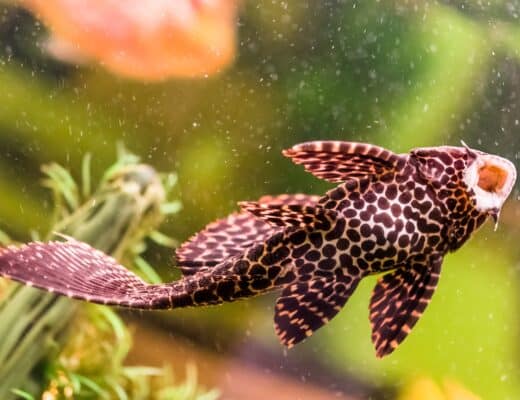 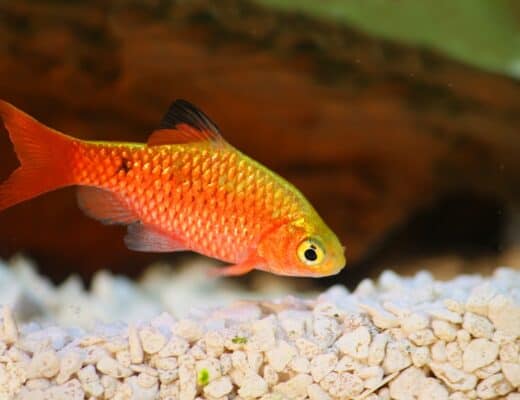 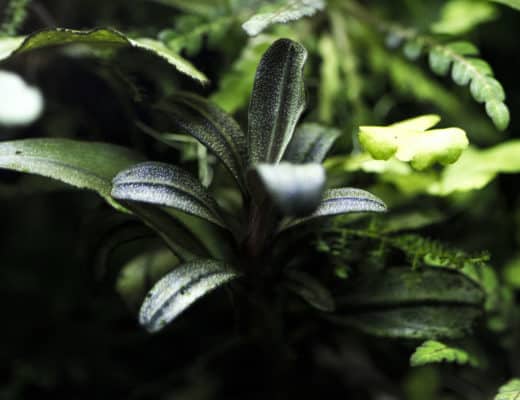