Can Fish Hear You? A Simple Question With a Complex Answer! 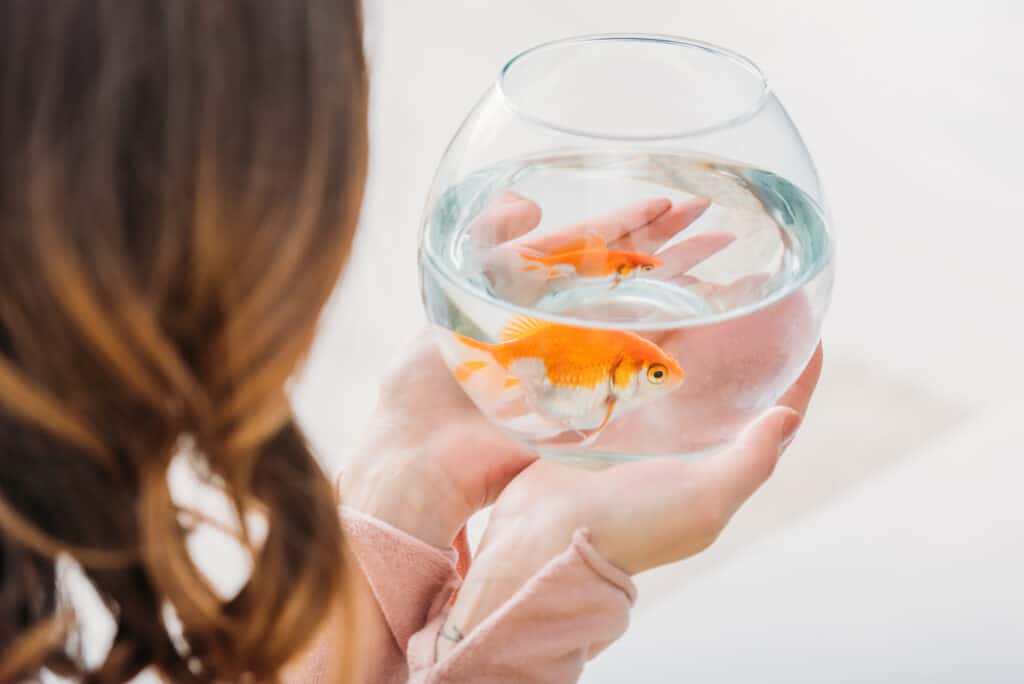 If you’ve got aquarium fish, you probably talk to them. Just admit it! We all like to talk to our fish when we think that nobody else is around to hear.

But can fish hear you all the way from under the water? The answer is yes! They can. Although their hearing apparatus may work rather differently from our own, wild and aquarium fish tend to be very good at hearing sounds. Let’s find out more.

If you look closely at your pet fish, you won’t find any ears that you can see, and that’s because their hearing organs are hidden inside their bodies!

Sound perception organs in fish vary from species to species but tend to include cilia (nerve hairs), otoliths (ear stones), and ossicles (ear bones). Some fish can also pick up vibrations from their swim bladder and interpret the signals with their inner ear.

Fish are incredibly sensitive to vibration which helps them to detect threats such as predators, or perhaps a tasty meal approaching somewhere nearby! Some families of fish such as sharks can even sense electricity!

Do Fish Like It When We Talk To Them?

It’d be difficult to know for sure if your fish enjoy you speaking to them without first learning how to hear your fish speak!

Some pet fish do, however, appear to enjoy the presence of their owners. Betta fish and goldfish for example will often follow their owner around the room through the glass and enjoy interacting with humans in a variety of ways.

If you sense that your fish is fond of you, there’s a pretty good chance that they’ll enjoy hearing your voice too!

Do Fish Recognize Their Owners?

Studies have shown that aquarium fish do indeed recognize their owners, and their ability to do so increases with time.

Intelligent species of fish and especially marine fish seem to be able to form strong bonds with their owners and show different reactions to them compared to other people who enter the room.

Betta fish have been shown to recognize the voice of their keeper, and can even be trained to perform tricks in response to audible stimuli such as tapping gently on the glass.

But practice makes perfect – if you want your pet fish to recognize your voice, you’d better talk to them every day!

Does My Pet Fish Know His Name?

There isn’t any scientific evidence to suggest that fish know their names or can respond to specific verbal commands like cats, dogs, and some birds do.

But if you feel good addressing your fish with a certain name there’s no reason not to do so. Your fish will pick up on the sound of you speaking, no matter what you’re saying, and may respond to you whether you use a particular name or not.

Can Talking To Aquarium Fish Scare Them?

Having said that, if you were to shout and scream, you’d definitely be able to observe your fish become distressed by the commotion! Since stress can be so detrimental to your fish’s health, it’d be better not to try that.

Can My Aquarium Fish Hear Me Moving About the Room?

While our vocal cords will likely sound muffled and muted as they enter the aquarium, heavy, bassy vibrations caused by our movement around the room may sound much louder.

When I was a teenager, I used to keep fish in a room with noisy floorboards. I noticed that as I moved around the room the fish would pick up on the floorboards creaking, and would sometimes even become quite alarmed if I created a lot of noise.

It’s therefore probably better to avoid jumping up and down beside your fish tank if you want to avoid alarming and distressing your fish!

Can Loud Noises Harm My Fish?

Loud noises caused by humans can indeed be harmful to fish, and there have been scientific studies to prove it. In 2018, researchers found that noises created by human machinery could negatively affect the foraging ability, predation risk, and reproductive success of certain fish species.

In addition, they found that fish exposed to loud sounds had increased cortisol levels – indicating that fish do indeed become stressed by exposure to loud noises.

A fascinating study from Keio University, Japan, revealed that goldfish can tell the difference between two pieces of classical music by different composers. The fish were trained to give a behavioral response when they heard a piece of Bach, but wouldn’t respond the same way when they were played music by Stravinsky.

The researchers also suggested that the goldfish didn’t seem to show any preference between classical and modern music.

If you’ve ever tried listening to music underwater, you’ll know that it sounds completely different than when heard on dry land.

Whether fish enjoy listening to music hasn’t yet been proven, but it’s likely that very loud or heavy music has the potential to disturb your fish, just as the sound of loud machinery can.

Can Fish Speak or Communicate With Each Other Through Sound?

Fish haven’t developed the complex underwater languages that aquatic mammals like dolphins, whales, and manatees have. But some fish species do communicate with each other through sound, and a few of them can even be kept in freshwater aquariums.

Synodontis or ‘squeaker catfish’ are so-called because of their ability to make a high-pitched squeaking sound by rubbing their spine bones together. It’s thought that they do this when they are frightened or feel aggressive. One of my favorites of all aquarium fish – the Upside-Down Catfish – used to keep me awake at night with their marvelous squeaking sounds!

Croaking gouramis (Trichopsis vittata) are another novelty in the aquarium for their ability to produce grunting or chirping noises with their pectoral fins. For this species, the sound is more associated with their courtship ritual and territorial conflicts between males that can last several hours at a time.

Can My Fish Speak to Me?

If you look at the two examples above, you’ll know that some fish can produce audible signals that will let others (including you!) know how they’re feeling.

But communication doesn’t have to be only through sound! Your fish are constantly talking to one another through their body language, and if you learn to interpret it, you can understand what your fish are saying too.

Puffed-out gills and fins and extended lips for example are often part of a territorial or courtship display, where a fish wants to show off their prowess to intimidate or impress other fish around them.

Pectoral fins clamped tight against a fish’s body on the other hand indicates a disease or health problem in your fish.

And besides these natural behaviors, your fish can also learn to speak with you more directly! Have you noticed your fish approaching the glass or swimming up and down the tank frantically when they see you? They could well be hungry and asking you for food or attention.

Other Ways To Interact With Your Fish

Although fish may not be masters of verbal conversation, there are plenty of other ways you can interact with them.

Domesticated fish can learn to play games or perform simple tricks with you, such as chasing your fingers across the glass, swimming through hoops, or even jumping out of the water.

This is normally achieved by feeding the fish their favorite foods when they successfully perform the desired trick.

Betta fish, puffer fish, clown loaches, oscars, and goldfish are all famous for being intelligent fish with bags of personality and are some of the best choices if you’re looking for freshwater fish that enjoy interacting with you.

Is It Good To Speak to Your Fish?

While fish in captivity may not understand every word you’re saying to them, that doesn’t have to be a problem if you enjoy speaking to them!

Speaking to our pets can be very therapeutic. They just sit and listen, and don’t judge us. Sometimes it’s nice not to have anyone talk back to us!

Speaking to your fish also helps to strengthen your bond and helps you spend more time with them, which makes you a better fishkeeper.

Not only can your aquarium fish hear you speak, but they can also respond to certain sounds, differentiate different types of music, and speak back to you through their body language.

Fish have more brains and personalities than many humans give them credit for, which is why it’s so important to understand them and take care of them the very best way you can.