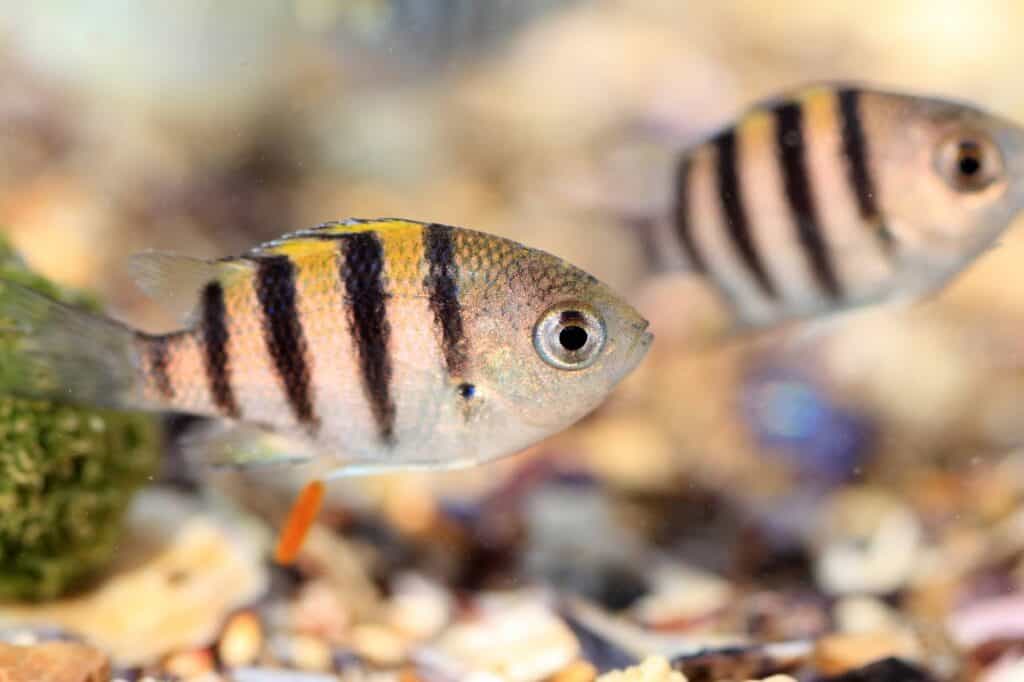 After dogs and cats, fish are the most popular pet in the US! Whether you have a pet betta fish, a goldfish, or a pufferfish, each individual has its own personality.

So, you want to choose a name for your fish that reflects its looks, character, or habits. You might want to go for funny fish names, famous fish names, and even clever fish names. When it comes to choosing names for fishes, the sky’s the limit!

Read this fun list of popular names for some interesting facts about fish names and to get some ideas for brilliant names for your fishy friend that you’re sure to love!

Does Your Fish Need A Name?

All fish have their own distinct personality. For example, some fish, such as bettas, are intelligent creatures that recognize their owners and can even learn simple tricks.

So, giving your aquatic friend a name helps you feel closer to your pet, making the time you spend with him even more fun.

It’s not always easy to tell the sex of a boy fish, although males are generally more brightly colored and are often smaller than lady fishies. Male bettas are always more flamboyant in their coloration and finnage, and male goldfish develop white spots or tubercles on their gill covers during the spawning season.

Here’s a selection of cool pet names that are perfect for male fish.

Nemo (perfect for a clownfish)

Whether you have a cute little ladyfish or a feisty girl who takes no messing from the boys, there’s a name in this list to perfectly fit her. Check out this comprehensive list of female fish names to find the perfect match for your pet.

Goldfish are still the most popular pet fish on the planet! And with over 200 species of these adorable fish to choose from, there’s plenty of inspiration for names.

Betta fish are colorful, popular species of fish that deserve a great name. Take a look at this list of pet fish names to find the ideal moniker for your underwater friend.

Some fish are definitely cuter than your average guppy or tetra. And they need a cute name to match. Here’s a selection to get your creative juices flowing!

Can Your Pet Fish Recognize Your Voice?

But if you talk to your fish and call his name, can he even hear you underwater?

The answer to that question is, basically, yes, your pet fish can hear you talking to him. Actually, all fish can hear. But why? Well, fish species are either prey or predators. So, they use their senses of sight, smell, and hearing to detect and avoid or locate other fish. Fish also use their lateral line to pick up vibrations in the water.

But fish don’t have regular ears like you and me. Instead, a fish has tiny holes on either side of its head, containing hearing structures. The fish can hear sounds outside its tank, although the glass and water combine to dampen the sound. That makes it unlikely that your betta buddy or goldfish friend will hear your voice as clearly as you can hear your TV or your cat meowing.

Also, unlike your cat or dog, your fish won’t recognize his name. For example, I call my goldfish by their names at feeding time, and they all rush over to me. But that’s because the fish know that someone approaching the tank means food, not because my fishy friends know their names!

Can Fish Learn Their Names?

Although fish don’t actually learn their names, they can learn by word association. So, if you repeat a word and a particular action often enough, your fish will get to learn what that word means.

For example, if you say “food” every time you approach the tank to feed your fish, more intelligent species like bettas will learn what that word means. As an experiment, ask someone else to approach the aquarium and say “food.” What reaction does your friend get? If the fish rushes to the surface expecting to be fed, he likely understands the word “food,” but he doesn’t care who’s saying it. So, that nicely proves the theory that although intelligent fish species can learn certain words and sounds, they can’t learn their names.

What Do Fish Names Mean?

If you look up any fish species, you’ll see that each one has a scientific or taxonomic name, as well as at least one common name.

Scientific names have two parts, consisting of a species and a genus. The genus is generally a noun with the first letter as a capital. The species is usually shown in lower case and is an adjective.

So, why do we need scientific names? As previously mentioned, most fish have several common names, some of which are the same for multiple species. Aquarists use the fish’s scientific name to avoid confusion.

For example, False Percula clownfish, Clown Anemonefish, Nemo fish, and Ocellaris clownfish all refer to Amphiprion ocellaris. Also, there are around 30 species of clownfish and numerous lookalikes. So, there needs to be a way of definitively identifying each fish.

The Roots Of Scientific Names

Many of the scientific fish names are derived from Greek or Latin. Etymology is a fascinating study that can tell you a lot about the origins of the fish you’re researching.

For example, scientific names ending in “ensis” indicate that the fish comes from a location with that name. So, a fish whose name ends in brasiliensis originates from somewhere in Brazil. Names that end in “ae” or “i” are named after someone, often the person who first described or discovered the species. The letter “i” is for a man, whereas “ae” indicates a woman.

Tan: Tan Kan Fei, named for the man who first described the fish

Ichthys: from the Greek, meaning “fish”

albo: from the Latin, meaning “white”

nubes: from the Latin, meaning “cloud”

Fish are the third most popular pet species in the US after dogs and cats. So, you want to give your swimming sweetie a suitable name. Fish can hear their owners speaking to them, even though they might not actually recognize their names.

But do you know better? Does your fish know his name? Tell us your story in the comments box below, and don’t forget to share!