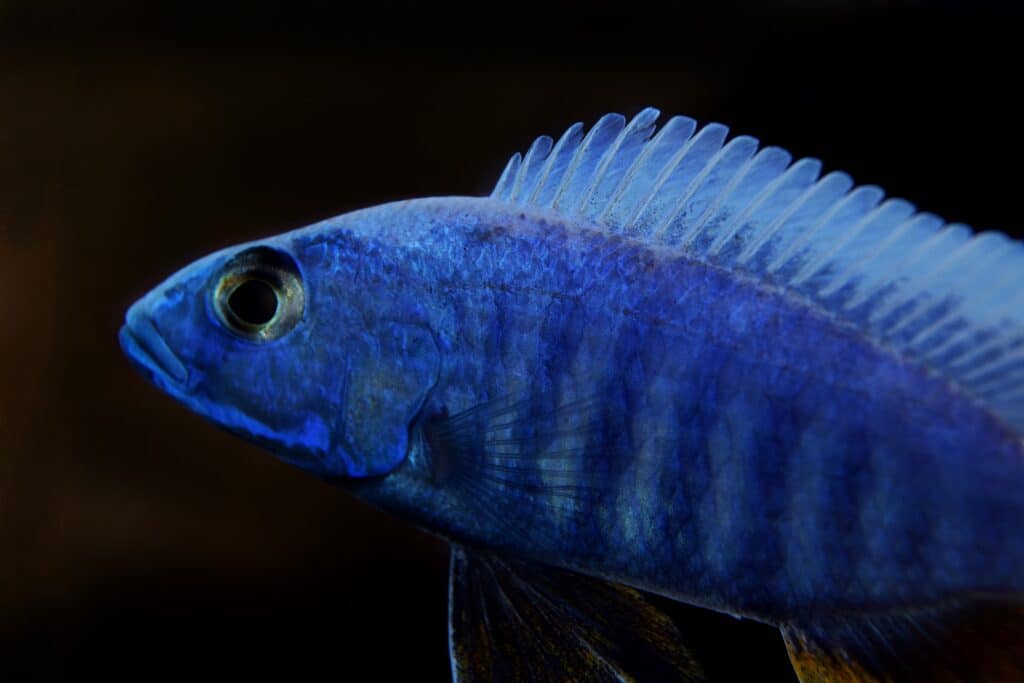 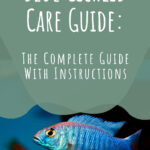 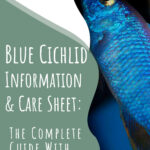 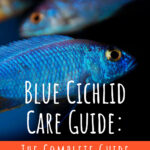 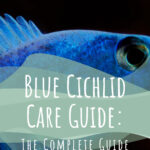 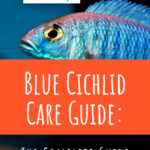 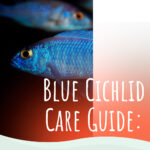 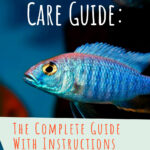 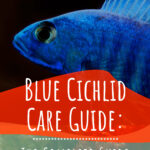 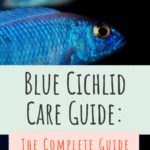 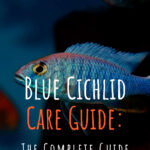 The blue cichlid, also commonly known as the electric blue cichlid, can be easily mixed up with other cichlids from the same genus. However, this fish is an African cichlid all of its own and has some slight differences from the other similar fish found in Lake Malawi. Luckily, the care requirements don’t differ too much and this beautiful fish can make its home in most cichlid tank setups.

Keep reading to find out everything you need to know about the blue cichlid and how to keep one of these freshwater fish in your own aquarium!

The blue cichlid gets its name after its intense blue body; iceberg electric blues are a variety of this species and have been bred to express lighter shades of blue.

As mentioned before, the blue cichlid (S. fryeri) is commonly confused with the electric blue hap (S. ahli) so much so that some hobbyists don’t even know that they are two individual species; luckily, the true electric blue hap species doesn’t show up in the aquarium hobby often, and an S. fryeri will usually be correctly labeled regardless of the assigned common name.

Female blue cichlids are a much lighter shade of blue or grey than males and may have darker bands across their body. Some females may even have hints of light blue or yellow on their fins.

The only known way to superficially tell S. fryeri from S. ahli is by looking at the length and shape of the head; S. ahli will have a more elongated head while blue cichlids (S. fryeri) will have a stumpier, more compact head.

How big do blue cichlids get?

Along with differences in color, blue cichlids also differ in size between male and female fish. Male blue cichlids grow between 7-8 inches (17.8-20.3 cm) while female fish grow a little smaller, between 5-6 inches (12.7-15.2 cm) when fully grown.

The blue cichlid is an African species originating from Lake Malawi which is among the top ten largest lakes in the world. There, these freshwater fish can be found throughout most regions of the lake; this is in contrast to S. ahli which can only usually be found in the most northern sections.

S. fryeri mostly likes to stay near the shallower coastline among rocks and fallen branches. It is believed that their maximum depth is around 164 feet (50 m) while S. ahli venture to upwards of 500 feet (152 m).

If you’ve kept other species of African cichlid before, then caring for an electric blue is not too different.

Because these fish can get relatively big and aggressive, it’s recommended to start with a minimum tank size of 75 gallons (283.9 L). They will appreciate a sand substrate with lots of large rocks that create crevices for these fish to establish territories in. Additional driftwood may also be added to provide more coverage and to make a more natural environment; cured terra cotta plant pots may also be used to create even more areas for your fish to hide.

Otherwise, water conditions align with many other species of cichlid. Water temperature should be between 75-82° F (23.9-27.8° C). These cichlids like the water to be slightly more alkaline than most freshwater fish and prefer a pH between 7.6-8.8; a buffer, such as crushed coral or another aquarium supplement, might be needed to bring water hardness and other levels to where they need to be.

It is best to keep blue cichlids with each other and with other Lake Malawi species. The blue cichlid does well in groups with one male for every 3-4 females; larger groups may be added as long as the tank size allows. While encouraged to keep other species from the same region as the electric blue cichlid, it is not recommended to keep S. fryeri with S. ahli due to the possibility of breeding and creating a hybrid fish.

It should be noted that blue cichlids have reportedly hybridized with species of Aulonocara and that members within Aulonocara easily hybridize with each other. The electric blue cichlid also has the tendency to become more aggressive towards fish of similar colors; this means that any other fish that is blue or has vertical bars should be avoided.

Small fish and invertebrates should not be added to the tank as they can and will quickly become food.

In general, the electric blue cichlid is considered a semi-aggressive fish. These fish typically spend their time in and among the rocks and may venture into the middle of the water column every so often.

These cichlids are not the most aggressive fish, but definitely need some special attention when it comes to tank mate compatibility. As mentioned before, these fish will go after similar-looking species and defend their territory when necessary. This defensive behavior will also become more intense during spawning periods.

Why did your blue cichlid turn yellow?

If your electric blue cichlid is turning yellow, there might be cause for concern. While cichlids usually make color transformations as they mature from juvenile to adult, yellow is not a stage that is seen in S. fryeri; juveniles are a dull grey until they finally come into their darker colors as they grow. Female fish might have more noticeable yellow on their fins, but a male or female blue cichlid should never turn completely yellow.

More than likely, if you find that your blue cichlid is turning yellow, it’s due to stress. This could be the result of unideal or fluctuating changes in water parameters or tank settings; a change in color could also be the result of disease or infection. No matter the cause, a change in color indicates that something is wrong and that it needs to be fixed immediately.

If all water parameters are testing correctly and the tank has not been altered in any way, then it might be time to reconfirm the type of cichlid you have!

The blue cichlid is primarily a carnivore. This means that these fish do best when given a meat-based and high-protein diet.

For the brightest and most electric colors of blue, it is recommended to provide a varied diet of live, frozen, and freeze-dried food options. Worms (earthworms, bloodworms, Tubifex worms), brine shrimp, and krill should regularly be given; additional frozen foods, like shellfish and fillets of fish, may also be supplemented. It is recommended to feed a high-quality fish food flake or pellet as the staple of the diet.

Make sure to never feed your blue cichlid more than it can eat in one sitting; large amounts of leftover food can start to affect water conditions. Also, make sure to avoid too many fatty foods as this can cause your fish to become overweight and lethargic.

Luckily, these beautiful fish are not too difficult to breed in a tank setting. If you have an appropriate tank set up with the correct ratio of male to female fish, then there is a chance that your blue cichlids will breed on their own without any intervention. However, if you find that your fish aren’t readily breeding or the fry are not making it to adulthood, then you might need to recreate more optimal conditions.

If you’re serious about breeding your blue cichlids, it’s best to have at least 75 gallons (283.9 L) with 3-4 female fish for every male. Water parameters should be steady and plenty of caves should be made available for the mated pair to occupy.

Spawning begins when the male fish attracts a female through a mating dance where he best displays his colors and size. During this time, the male’s colors are often enhanced for better display. As he performs this show, the female will lay eggs on top of the rock or platform. This is usually on a slope and the eggs will roll down to the male where he then fertilizes them. Like other cichlids, the female blue cichlid will then take the fertilized eggs into her mouth for incubation of about 3 weeks.

Once the eggs hatch after that time, she will continue to protect the fry in her distended jaw. If she is stressed during this time by other tank mates or water parameters, it is possible that she will swallow them or spit them out and abandon them.

In order to have the best outcome for the fry, many hobbyists choose to remove the female from the tank. One of the main problems that comes with this is that the female could lose her place in the harem if keeping several females in the tank; this means that it’s possible that you could end up losing your female blue cichlid if not reintroduced correctly.

Otherwise, blue cichlid fry are some of the larger fry that you can have, so they are usually able to take small foods, like brine shrimp and microworms, almost immediately. You can then transition them to fish flakes and more substantial foods as they grow.

What is the rarest cichlid?

While S. ahli is not commonly seen in the aquarium trade, they do pop up for sale every now and then. Fortunately, blue cichlids are often very abundant due to their popularity. But even with the common mix up of these two special, neither one is considered incredibly rare.

One of the rarest aquarium cichlids does not come from Lake Malawi, but from Eastern Cuba instead. Many cichlid hobbyists consider Nandopsis ramsdeni to be one of the rarest species to come across in the aquarium hobby. These fish look like stone with speckled dark greys and blacks over a light grey body. Import of these fish is limited due to political conflict.

While not rare, one of the most expensive cichlid varieties is the flowerhorn hybrid.

There is a lot of confusion around the names ‘electric blue cichlid’ and ‘electric blue hap cichlid’ in the aquarium hobby. When talking about blue cichlids, usually Sciaenochromis fryeri is the species in question. However, S. ahli is still mislabeled as a blue cichlid even though it is uncommon to see them in the everyday aquarium trade.

Luckily, no matter which fish you end up with, their tank setups and care requirements are generally the same. These cichlids can grow to a relatively large size and need to be fed a mainly carnivorous diet.

If you have any questions about blue cichlids, the differences between S. fryeri and S. ahli, or have had experience with one of these look-a-likes in your own freshwater tank, don’t hesitate to leave a comment below!