Betta Fish Behavior Before Death: How Can I Tell if My Betta Is Dying? 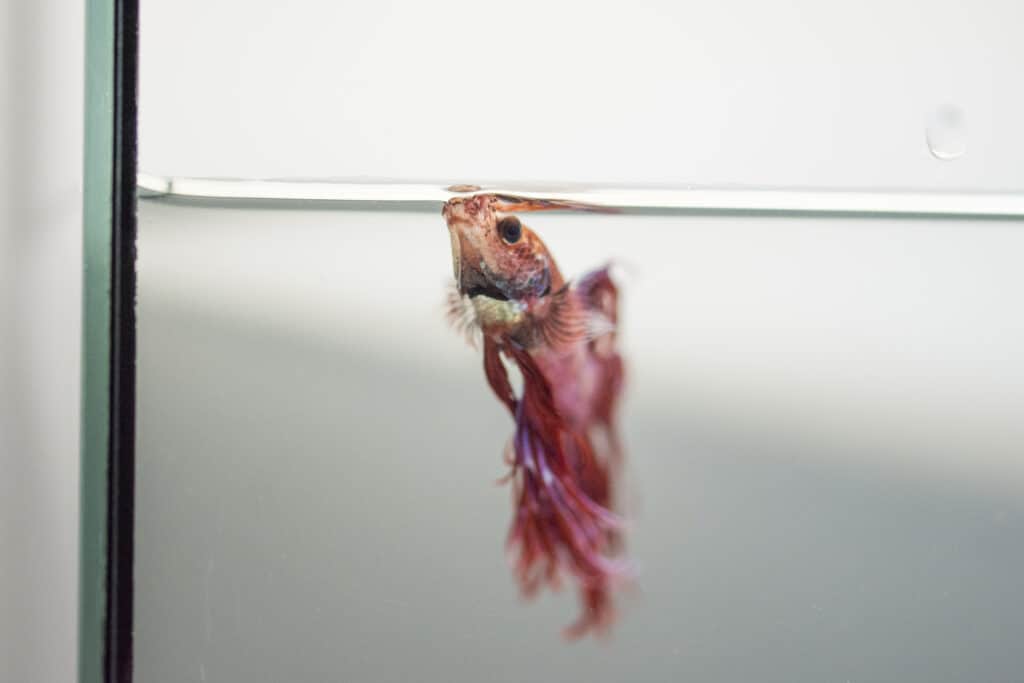 Betta fish are popular, colorful fish that many aquarists love. Unfortunately, they are prone to a variety of health issues. A betta’s environment is a direct factor influencing its lifespan. Factors like water quality, food quality, disease, and more affect how long a betta will live.

As betta fish age or become sick, they show various signs and behaviors before death. Read on to find out more about these behaviors and what they mean.

What Is a Betta’s Normal Lifespan?

In an aquarium environment, betta fish usually live for three to five years, but they have been known to live up to ten years. Many factors affect a betta’s lifespan, including diet, water conditions, tankmates, etc. Wild bettas live shorter lives due to aggression from other bettas.

What Are Some Common Behaviors Before Death?

Noticing changing behaviors in your fish isn’t always easy. However, a betta’s behaviors before death are very distinct and can give you time to remedy a problem before your fish dies. It is important to pay attention regularly to expected betta fish behavior. These changes in behavior can mean life or death for your fish friend.

A decrease or lack of appetite is one of the most common signs that you may have a sick fish. It’s important to pay attention to how much food your betta fish is regularly eating.

If your betta is dying, it may still go to the surface during feeding but not eat. A betta should be eating around five pellets daily. Make sure you’re using betta-approved foods.

If the loss of appetite lasts for multiple days, you must get your betta checked out quickly. Betta fish can live without food for over a week, but it’s not good for them.

Changes in your betta’s coloration can allude to their emotions or health. One of the deadliest fish illnesses betta owners come across is nitrite poisoning. If you notice your sick betta fish has a red belly, this indicates poisoning.

It is normal for their colors to fade as bettas get older, but the sudden fading of colors of a younger betta can be a cause for concern. Abnormal changes in coloring or horizontal stripes appearing on their body are signs that you have a sick betta fish.

A healthy betta fish is a very active fish. They are active swimmers and generally social. They usually enjoy interaction with their keepers, so if you notice them not responding to your movements and greetings, this can signify that they aren’t doing so hot.

As bettas become more ill, they will respond to their keepers less and less. They may also be less responsive during feeding or not come to the surface for feeding.

Do fish sleep? Actually, they do. So, if you see your betta floating in the middle of the tank or hiding, it could just mean they are resting. However, when you notice your betta’s activity lessen, you should pay attention. Lethargy can be a crucial behavior bettas display before death.

If your betta spends large amounts of time sleeping during hours when they are usually active, it can be a sign they are sick. If you’re concerned, you can try to see if they perk up with food or lights, but if they don’t, they may be sick.

Isolation From Other Fish

If your betta is isolating itself during active hours or when the rest of your fish are socializing, this can be a key indicator of sickness.

Gasping At the Surface

When your fish is gasping at the surface of the tank, this can mean that they aren’t getting enough dissolved oxygen in the tank.

Gasping at the surface is a common sign before death. To treat this problem, you can agitate the surface water with one of the following:

Keeping more fish in a tank requires more oxygen for the fish to thrive.

Betta fish can have trouble breathing when they age or become sick. The ability of the labyrinth organ, which acts as the lungs, to obtain oxygen reduces as they age, and they start to breathe more rapidly. Rapid breathing can signify your betta fish is dying if they are old or ill if they are young.

Betta fish can be prone to skin infections. These infections sometimes cause eye problems. When a betta’s eyes swell, it’s usually due to an infection, which can lead to death. Swelling in the eyes indicates that the infection has been ongoing for some time, and bettas sometimes have difficulty recovering from these illnesses.

Clamped fins are a sign of stress in your fish. Clamped fins occur when bettas hold their fins folded into their body until the fin curls in on itself.

Poor water quality, unsuitable tankmates, lack of space, and more can cause stress which leads to clamped fins.

Like humans, your betta can experience a hunched back when it ages. A hunched back isn’t a direct sign of dying, but it is a sign that your betta fish is aging and nearing death.

Conditions That Contribute To The Death of Betta Fish

Another cause of betta fish death is overfeeding. Bettas are very gluttonous. Offering your betta a variety of foods, such as pellets and freeze-dried foods like bloodworms, is essential for a healthy betta.

Bettas should be fed twice per day. Feed your betta in small portions. Their stomach is around the size of their eyeball, so that’s about how much food they eat. Overfeeding can lead to health issues, including death.

Stress can build over time and cause fish death. Many things are stressful for bettas, including:

You may think tapping on the glass isn’t a big deal, but it can be super stressful to fish. Many of these conditions can easily be remedied to prevent fish death.

Betta fish are generally hardy fish and don’t die easily. However, they can be injured easily due to their long-flowing fins. Injury can lead to infection and death.

When keeping a betta, make sure that there aren’t any sharp objects in your tank that they can hurt themselves on. It’s also best to make sure they have tankmates with whom they won’t get aggressive.

Is My Betta Dying? How Do I Tell?

If your betta is dying, it can be showing signs of stress like hiding, laying on the bottom of the tank, white or brown spots on the body, strange movements, or disintegration of its fins. These can all be signs of severe illness that lead to fish death.

Is My Fish Dying of Old Age?

Like any other animal, old age will happen eventually. Betta fish dying of old age begin to slow down just like humans. Color fading, a lack of interest, and lots of sleeping are also signs your betta is dying of old age.

As they age, bettas are also more susceptible to infections and are less able to recover.

Do Bettas Sink When They Die?

Most bettas will sink when they die, so a betta resting on the bottom of your aquarium can be concerning.

When a betta is sleeping, it can mimic the signs of death. They may lay on a flat object, unmoving, and their colors may fade. This is partially a defense mechanism because other fish are unlikely to bother a dead fish.

How Do I Give My Dying Fish Comfort?

If you notice these behaviors that bettas show before death, change your tank water immediately. This can save your fish.

However, if your betta fish is dying and there isn’t anything more that can be done, just provide them with comfort in their last moments. You can do this by keeping the water temperature warm and adding a little bit of salt to the tank to help with discomfort. You can also move them into a bigger tank if they are in a small one for some added comfort.

Just make sure their environment is as comfortable as possible.