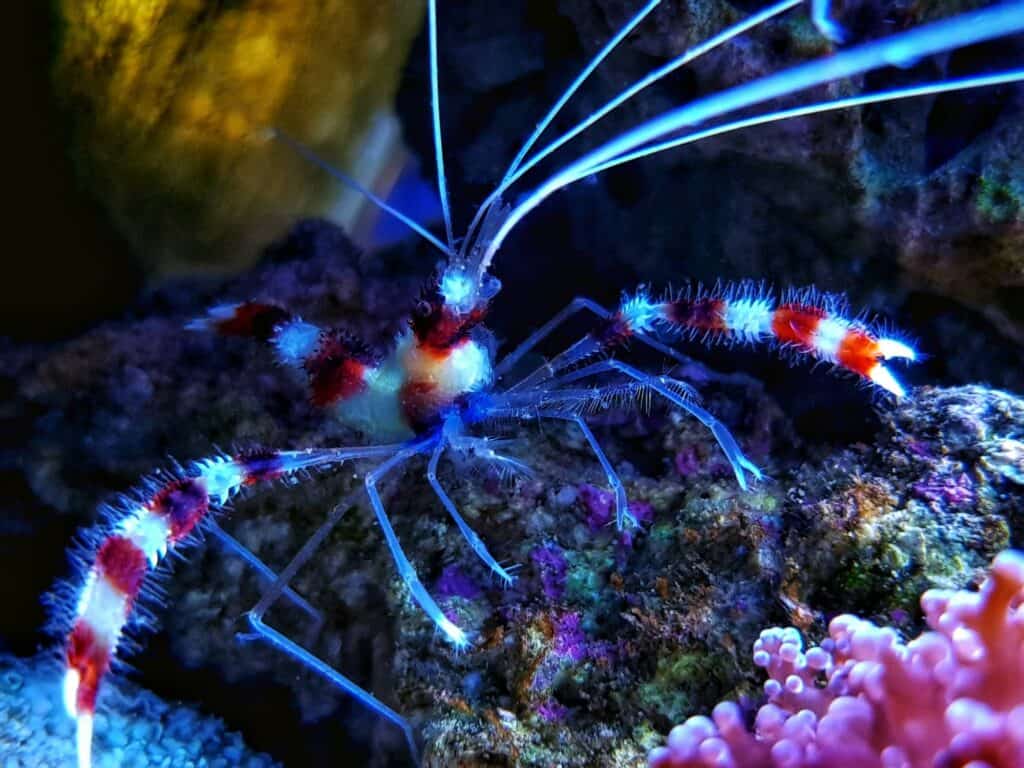 Are you setting up a saltwater tank and don’t know which shrimp to choose? The banded coral shrimp (also called the coral banded shrimp and banded cleaner shrimp) is one of the most widely available types of ‘shrimp’ in the hobby, but they’re not necessarily suitable for every tank setup.

Keep reading to find out everything you need to know about banded coral shrimp, how to take care of one, and how to know your tank is right for one of these interesting-looking crustaceans!

The only visible difference between these two taxonomic groups is that members of the Stenopodidea infraorder, like banded coral shrimp, have oversized pairs of third legs.

This attribute also earns this family of decapod crustaceans the nickname “boxing shrimp.”

Banded shrimp have an extensive natural range. They can be found in areas of the Indo-Pacific, like Indonesia and Australia, and the tropical waters of the Caribbean.

As their name suggests, they stick around coral reef structures cleaning fish and grazing on algae and other microorganisms. They especially like Polychaete worms, which is important to keep in mind when moving them into a home marine aquarium.

Banded coral shrimp are among the most recognizable saltwater shrimp in the hobby. These shrimp catch the attention of many beginner hobbyists due to their bold red and white striped beautiful coloration and impressive pincers.

Banded coral shrimp can grow to about three inches (7.6 cm) long but are considerably larger when their white antennae are considered. They resemble shrimp in some ways, but their extra-long pincers and long pair of third legs set them apart.

It can be difficult to tell males apart from females aside from the difference in size. Females are larger and have bluish-green areas near where their legs meet their bodies. These are their ovaries and are especially noticeable after molts when the male transfers its sperm sack to the female to fertilize her eggs.

Though the banded coral shrimp (Stenopus hispidus) is one of the most common species in the aquarium hobby, there are a few others that you might come across when searching:

Banded coral shrimp do not require any different care than the needs of a standard saltwater aquarium.

These shrimp aren’t shy, though they like to stay tucked away in the cracks and crevices in rocks on the aquarium floor. Because of this, rockscape should be designed with them in mind.

Several caves should be made throughout the aquarium for your shrimp to choose from. Other tank inhabitants will also be pleased to take advantage of some extra privacy.

Otherwise, they can be kept with hang on the back, canister, or sump filtration. Either sand or crushed coral can be used.

It is crucial to keep magnesium and calcium levels up when keeping crustaceans. These nutrients are essential for proper molting, allowing your shrimp to grow, regenerate, or heal.

Some hobbyists choose to dose these nutrients along with iodine to help with molts, though this is not necessary if using a decent marine salt mix. As a side note, if you see what you think is a dead shrimp, check again to verify it’s not just a discarded exoskeleton.

As with other invertebrates, banded coral shrimp cannot tolerate high copper levels. Always make sure to check medicine ingredients before dosing your tank and keep your aquarium clean!

How many shrimp can be kept per gallon?

Shrimp are small and must not take up that much room in the aquarium, right?

Actually, it is best to think of shrimp as another fish added to the aquarium. Though these animals are small, they can have the same bioload and territory needs as small fish.

This is because, although they’re not overly aggressive, smaller areas make it easier for the shrimp to potentially catch fish. Though the level of predation exhibited by these shrimp is debated in the hobby, it is not impossible. Plus, you want your shrimp to be able to have multiple cleaning stations throughout your tank for their client fish!

Many hobbyists want to have different species of shrimp in their tank, like cleaner shrimp (Lysmata amboinensis) and fire shrimp (Lysmata debelius). Though banded coral shrimp are generally peaceful towards fish, they might not be as accepting of other shrimp.

Whether or not you can keep your banded coral shrimp with other types of shrimp depends entirely on the individual’s temperament. Some aquarium keepers have had luck keeping multiple shrimp species in nano tanks (<40 gallons/151.4 L), while others can’t keep two from fighting in several hundred gallon systems.

If you find that your banded shrimp accepts other shrimp, then it is recommended to allow each shrimp at least 20 gallons to itself. For example, a banded coral shrimp and a cleaner shrimp would need at least 40 gallons to cohabitate.

Can banded coral shrimp be kept together?

A truly mated pair of banded coral shrimp can be kept together in the same aquarium without any problems; it is recommended to have at least a 30-gallon aquarium (113.6 L) to house a pair.

These shrimp can be difficult to tell apart, though, so it is best to purchase the pair together from a reputable aquarium store to ensure that there won’t be any fighting once added to your tank.

Otherwise, it is not good to keep more than one banded coral shrimp per tank. Males can become especially territorial, and females usually won’t tolerate intruders either.

Overall, no, banded coral shrimp cannot be kept together.

This is another subject for discussion within the saltwater community. These shrimp have large pincers that make it seem like they’d be a huge problem for corals.

Contrary to popular belief, banded shrimp are generally considered a safe choice for reef tanks. Yes, there are stories of shrimp destroying coral colonies overnight, but no more so than any other shrimp or crab species that have gone rogue.

One of the best ways to discourage nipping at corals is by keeping up with feedings. Not only will your fish enjoy high-quality live and frozen foods, but so will your banded coral. If you still find your shrimp picking at corals, it may be time to rehome it to another hobbyist’s tank.

You should also note that their long antennae can unintentionally annoy corals, causing them to retract for extended periods.

Apart from other shrimp, banded shrimp can be kept with various invertebrate-safe tank mates; these peaceful fish do not necessarily need to be reef-safe.

Banded coral shrimp should not be kept with anything that could potentially develop a taste for shrimp and eat them, like triggerfish, eels, and larger angelfish.

As mentioned before, it is also best to keep faster fish just in case space gets cramped and your shrimp decides to go after a fish. While this is extremely unlikely to happen in larger tanks, it is worth considering for smaller ones.

These shrimp are mainly nocturnal and will stay hidden in the rockwork for most of the day. At night they will emerge into the open aquarium in search of food, namely bristle worms.

Bristle worms are a very common hitchhiker in saltwater aquariums. These squirmy worms are great cleanup crew members, but their unsightly appearance makes most hobbyists want to get rid of them as soon as possible.

Luckily, banded corals are one of the best natural predators of these worms. Within a few weeks of adding your new shrimp, you will likely see a dramatic decrease in your bristle worm population.

This is a much better alternative to using traps or risking getting stung as long as you have a large enough tank to house a banded shrimp comfortably.

For the most part, banded coral shrimp are scavengers that will find their own food in the tank. Though an omnivore that will readily graze on algae, they prefer meaty foods at feeding time, and it isn’t uncommon to see them eating decomposing matter in the tank.

For the most part, there is no special banded coral shrimp diet. Your shrimp will readily eat whatever is given to the tank population and whatever is leftover too. They will appreciate foods that sink down to them, but they’re not afraid to go to the surface of the water or all the way down to the substrate to eat.

Some of their favorite foods will be live, frozen, and freeze-dried bloodworms, brine shrimp, and high-quality pellets or flake foods.

Banded coral shrimp are one of the most popular species of saltwater shrimp, even though they’re not true shrimp! Though these animals might look fearsome with their large pincers, they are moderately peaceful and can be kept with most fish and invertebrates though they are less tolerant of each other.

If you have any questions about banded coral shrimp, other shrimp species, or have had experience keeping multiple shrimp in the same tank, don’t hesitate to leave a comment below!