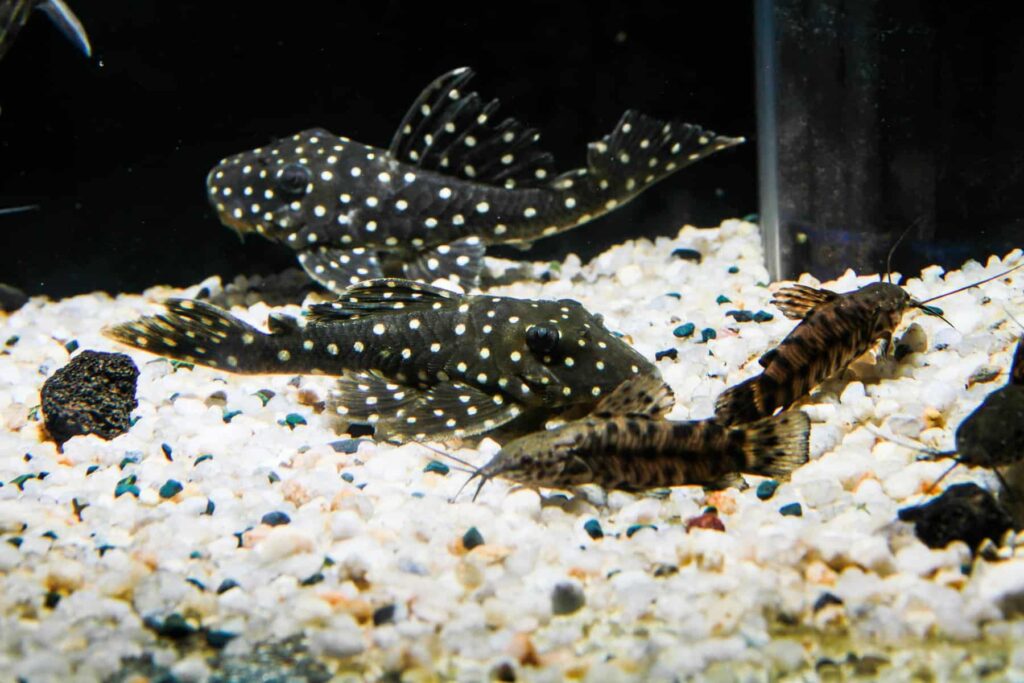 When you think of snowballs, the idea of a small mound of frozen water in your winter glove may come to mind – especially if you’re about to throw one at a friend or family member.

Or maybe you think of a fluffy, all-white cat.

But there’s also a tiny catfish with the snowball name that may be a welcomed addition to your home aquarium.

Meet the Snowball Pleco, a tropical, nocturnal catfish from the tributaries of the Amazon River in South America. This distinctive fish has kept aquarium lovers fascinated for over a decade now.

These beauties are all black with white and sometimes yellow polka-dots spread throughout their bodies – fins, head, tail, and underbelly. The contrast is so stark that the dots look like miniature snowballs, thus providing the name.

Snowball plecos have proven to be tolerant and adaptable to tank life. Undemanding and docile, this freshwater beauty is great for first-timers or experienced fish lovers. If you remain vigilant to take care of its unique needs, this South American catfish can thrive in your aquarium!

Below are our tips for caring for this South American Columbian and Argentinian beauty.

Snowball Plecos hail from the Rio Negro, the largest blackwater river on earth. El Rio Negro starts in the upper regions of Columbia and winds down into Argentina. Its name comes from the fact that vegetation sinks to the riverbed and, as it decays, it releases nutrients that turn the water dark brown – almost like black tea.

It can be difficult to determine the sex of a Snowball Pleco. Pectoral fins are more pronounced on males, and they can have small bristles. Females, on the other hand, are much stockier and deeper in color. In addition, Snowballs sport concave caudal fins.

Additionally, males may have a reddish tint on their skins and teeth-like structures on their fins. Females tend to sport only the simple markings of the distinctive white spots.

Both sexes have flattened bellies and downturned mouths with widened pelvic and pectoral fins.

Snowball plecos are known to be rather sturdy freshwater fish.

Be aware, however, because Snowballs are vulnerable to the same types of diseases that affect similar tropical fish. Ich is the most common malady affecting the Snowball pleco.

The problem: it is difficult to tell when Snowballs have Ich because the parasite produces white spots all over their bodies. Since Snowballs already have white spots everywhere, the harmful ones can be challenging to discover. But if they are left unchecked and untreated, your fish could die.

If you do notice the difference, remove the fish from the tank and keep it quarantined in freshwater by itself until it heals. There are many treatments available for Ich, with some of the easiest methods being water changes and water temperature control.

Other diseases to look out for include skin flukes and hole-in-the-head disease.

Snowball plecos eat just about everything. When traipsing up the rivers of South America Columbia and Argentina, they munch on seeds, waste, and tiny animals. So, feed your omnivorous pleco a variety of nutrients.

Still, you may notice your Snowball tearing into any meat you give it. They love aquatic invertebrates like smaller shrimp species. But they may be just as happy with a tiny bit of cucumber or zucchini.

You can try numerous foods with this species breed:

Just remember not to overfeed your Snowball.

Also, just because you notice your Snowball is a bottom dweller, don’t confuse that with being a bottom-feeder. Snowballs typically do not eat algae or plants, so they will not serve as a tank vac like other fish.

Snowballs like tanks that simulate their natural environments, especially at the bottom. Sand is the preferred substratum because rocks and pebbles are too coarse for their skins.

Simple décor and hard-plastic aquarium-safe decorations knick-knacks are fine, but make sure you add decorations that approximate caves and tunnels. Snowball plecos love to explore and hang out in them because they are often shy and want places to feel safe.

Artificial caves work, but natural ones are even better. You can make these easily by carefully assembling scooping holes out of driftwood. Place a series of small driftwood pieces throughout the tank’s bottom and brace them with some rocks. Rocks provide a natural base, so the wood doesn’t come loose and float to the top.

Now, toss in several freshwater plants, and your tank is all set. Snowballs will meander around the plants but not eat them.

Also, you’ll want to try and keep the light levels lower than you might otherwise. Snowball plecos like an approximation of their natural environment, and they come from a black river with dark conditions.

Maintaining your tank at optimum levels is imperative for the ongoing health of Snowball plecos. Not that they can’t handle some adverse conditions. They can. It’s just better to keep an eye on things to ensure your Snowball is thriving in the new environment.

Aquarium water considerations are important when housing a Snowball pleco. They can be trickier than other tanks because the water needs to be warmer, softer, and more acidic. The aquarium also needs to have a constant flow to represent the river-like conditions Snowballs are used to.

Make sure you have a thermometer and water test kit available to ensure your aquarium’s water is maintained at the correct levels.

Check the temperature, water flow rate, pH, and water hardness. If you constantly make sure to test that these stay within acceptable ranges, your Snowball will flourish.

Keep the water between 72ºF and 86°F (22–30°C). Water temps may be a bit warmer than you’re used to. Remember, the Amazon and it is South American tributaries are tropical.

Tanks should be turned at least four times per hour. This equates to at least 160 gallons per hour, based on a 40-gallon tank.

Try to keep the water between 5.0 and 7.6 on the pH scale. Snowball plecos like the water a little on the acidic side, again to approximate their natural environment.

Because of vegetation decay, El Rio Negro is a relatively acidic river. But Snowballs can also succeed in mildly neutral water.

Plecos thrive in moderately soft water, so readings between 6 and 10 dKH should work well.

Snowball plecos do better when the water is constantly flowing and highly oxygenated to imitate their natural river habitats. Canister filters with powerheads should do the trick. along with air stones for aeration.

Snowballs like bigger tanks, especially if there are tankmates. Aquariums should be at least 40 gallons for individuals.

Your Snowball will likely get along with most other freshwater fish, although they may show some territorial streaks. Try to add fish that like to stay near the top of the tank for best results.

We encourage the Rummy Nose Tetras, Corydoras, Ember Tetras, Discus, Apistogramma, and Celestial Pearl Danio because they all fit in well with Snowball plecos.

Some hobbyists also have large shrimp species and different kinds of snails.

Just make sure the shrimp are large enough for your Snowball not to confuse them with food.

The Snowball pleco might be one of the most finicky fish in your tank. They sleep during the day and come out at night. Even then, these nocturnal fish can be a bit shy and withdrawn.

Snowballs tend to spend their time alone, concealing themselves in and around the darker and more secluded areas of your aquarium. They like their own company.

However, male Snowballs can be protective of their space. This territorial nature, the only thing aggressive about this species, may preclude you from having more than one male in your tank.

Snowball plecos have lived about ten years in aquariums. That’s a nice span, but a little less than other pleco species.

This variety of pleco is on the smaller side, growing to an average size of 5.5 to 6.3 inches. Some have grown to 7 inches, but that is rare.

The Snowball Pleco should be a great addition to your freshwater aquarium. This is especially true if you are looking for a striking fish that has a unique look. Its white polka-dotted skin is one of the most stunning you can find. Your friends and family will be drawn to its one-of-a-kind appearance.

Snowballs are also favorable add-ons to your tank because they tend to stay alone and won’t cause much trouble. They tend to roam along the bottom of the tank and zigzag around the plants, tunnels, and caves you’ve provided for them.

Plus, they eat just about everything you put in their sightlines.

If you have any questions, contact us today about putting a Snowball pleco in your aquarium, or have had experience with this South American species, don’t hesitate to leave a comment below! This is one snowball that won’t melt. It will stick around for years to come.