Do Fish Sleep At Night? 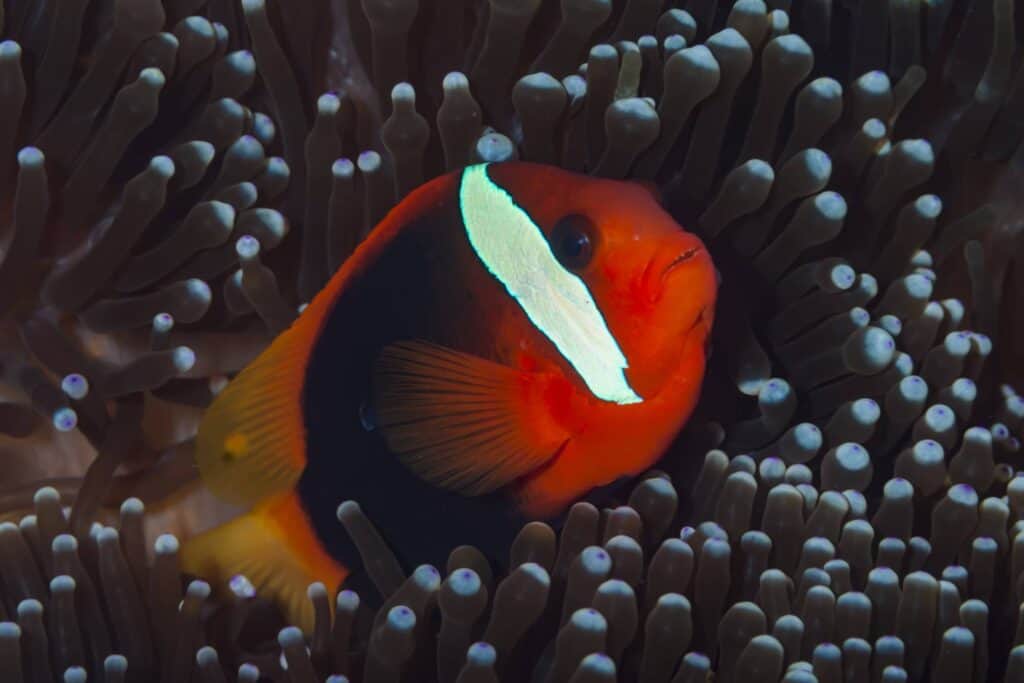 What happens when you turn off your aquarium light? Lots, actually.

Did you know that fish have a sleep-wake cycle just like other animals? Not only fish but also all invertebrates in your tank as well!

Keep reading to find out everything you need to know about what lurks in the dark in your home aquarium and if your fish get their rest at night, too.

Do fish sleep at night?

Yes, fish sleep at night, and just like us, they need sleep to stay healthy.

But how can fish sleep if they can’t lay down or close their eyes?

It’s weird to think about seeing a fish asleep, but although they don’t enter deep sleep the same way other animals do, researchers have found that they still enter a restful state to recharge.

A fish, during sleep, remains almost entirely still with its eyes open. Its heart rate, metabolic rate, and brain activity decrease, allowing the fish to get some necessary “shut-eye.” It’s similar to the REM sleep (rapid eye movement) we experience, even though it looks completely different.

For the most part, researchers studying the habits of fish have found that some species, like zebrafish, have diurnal sleep schedules, meaning they are awake during the day and sleep come the night time. Other species — nocturnal species like sharks or species that live outside of the reach of natural sunlight (apothic zone) like cave-dwelling fish — base their sleep habits on other factors.

Some fish sleep patterns depend on internal and external stimuli, for instance. Some fish species experience a paternal need to remain alert at night while caring for their young, causing them to have a night of sleep deprivation. Meanwhile, some juveniles might not sleep at all until several months old.

Another factor might include migration, though this will not happen in an aquarium setting.

How much sleep do fish need?

So, we know that most fish sleep at night, but do they need a full 8 hours just like other animal species?

This one’s a bit tougher to answer. Though researchers know fish slumber when the lights go out,  there’s still quite a bit we don’t know about fish sleep behavior.

From personal experience as a fish owner, mine head off to their usual sleeping areas soon after the aquarium lights go out. If sunlight is already shining on the tank in the morning before the lights turn on,  the fish are usually awake already.

It is probably safe to assume that your fish, like any other animal, sometimes wake up during the middle of the night. For their own safety, though, they probably won’t stray far from their preferred sleeping area of the tank.

In general, a healthy aquarium fish sleeps at night and needs at least 8-10 hours of darkness. In order to maintain a tight lighting schedule, use an aquarium lighting timer.

How do fish sleep?

Believe it or not, there are a few ways different fish species approach sleeping.

Most commonly, you can tell your fish is asleep by:

Once your fish becomes established in the tank, it will quickly claim a specific sleeping area. This spot might be far away from its usual location in the aquarium. This is also usually out of sight from the front of the display, especially for saltwater fish.

Wrasses are funny fish in their own right, but they have even weirder sleeping habits that can take a lot of hobbyists by surprise the first time they see them.

Many wrasses excrete a mucus cocoon to sleep in. You can sometimes see it if you shine light into their displays at night, and you might even see remnants in the morning.

It is believed that these cocoons help the fish stay safe from nocturnal predators, even in an aquarium setting.

Other wrasses will sleep in the sand with only their heads sticking out. This can certainly look like a dead fish, but it’s just your wrasse tucking itself in for the rest of the night.

Otherwise, both saltwater and freshwater fish will develop sleep habits unique to your tank.

Based on observation alone, it can sometimes be hard to tell if you’re dealing with a fish with disease or if your scaly little buddy is just resting.

When your fish is sick, the first indicator is that it will want to hide. It will also usually be lethargic, leaving it to rest on the bottom of the tank and other convenient items. Odd behaviors like irregular swimming, heavy breathing, or a lack of body movements usually follow along with loss of color. Still, illness in fish can look a lot like sleeping, and vice versa.

So, how can you tell if your fish is just tired or if it’s sick?

The main difference between a tired fish and a sick fish is habit. Tired fish really only display these symptoms at night. A sick fish will display them all the time.

It should also be said that though lethargy, loss of color, and leaning are some of the most common symptoms of illness, they are often accompanied by other atypical symptoms.

Again, the most significant difference is that these behaviors will happen at all times. Sickness will also usually cause disruptions in your fish’s night routine, making them more restless and seeking other sleeping areas. If you’re concerned your fish is sick, keep an eye on your fish for signs of illness during the day.

Sleep is just as crucial for fish as it is for you and me.

As mentioned before, fish use a day and night cycle to determine when to sleep. But for one reason or another, some hobbyists don’t want to have an aquarium light. Many ecospheres run fine without artificial lighting, but how?

Put simply, fish don’t need an aquarium light. However, they do need a source of light that lets them know if it’s daytime or nighttime. This doesn’t need to be a lot of light, and usually, ambient lighting is enough.

If you find that your fish are constantly hiding, though, this could be a sign that they’re uncomfortable venturing too far out into the darkness, and more light is needed, such as a night light.

What happens to the aquarium at night?

Besides your fish getting some beauty sleep when the lights go out, a lot is going on in your aquarium overnight that you might not know about.

The tank comes to life

In both freshwater and saltwater aquariums, there is a plethora of life. Not all tank inhabitants are most active during the day, though.

In fact, a good amount of invertebrates prefer to scavenge for food at night to prevent being eaten. This includes marine bristleworms, copepods, snails, and other micro-invertebrates.

The next time your tank light is off, shine a flashlight into the aquarium and see just how much life there is. Just make sure not to scare any fish as they could bump into the glass or even jump out of the top of the tank!

In addition to biological happenings, chemical changes also take place at night. Don’t worry though, this is perfectly normal and doesn’t need to be regulated!

In short, the water’s pH drops because photosynthesis from corals and plants stops. This means there’s more carbon dioxide in the water, which immediately influences pH. At the same time, other respiring organisms also emerge and contribute to the carbon dioxide levels.

In the morning, plants and corals will continue to photosynthesize again, rebalancing oxygen and carbon dioxide levels and ultimately raising pH.

This explains why pH levels are lower (more acidic) in the morning than later on in the day. To learn more about how pH works in the home aquarium, make sure to check out our guide here.

Yes! Fish need sleep just like any other animal.

Though considered a simple lifeform, fish depend on light and dark to establish sleep habits.

Some species of fish have pretty interesting behaviors when the lights go out, but the changes in the ecosystem between night and day definitely make you appreciate your tank that much more.

If you have any questions about how fish sleep, what happens in the darkness at night in aquariums, or have had experience keeping an aquarium running on natural daylight, don’t hesitate to leave a comment below!