Snail Eggs And What To Do With Them 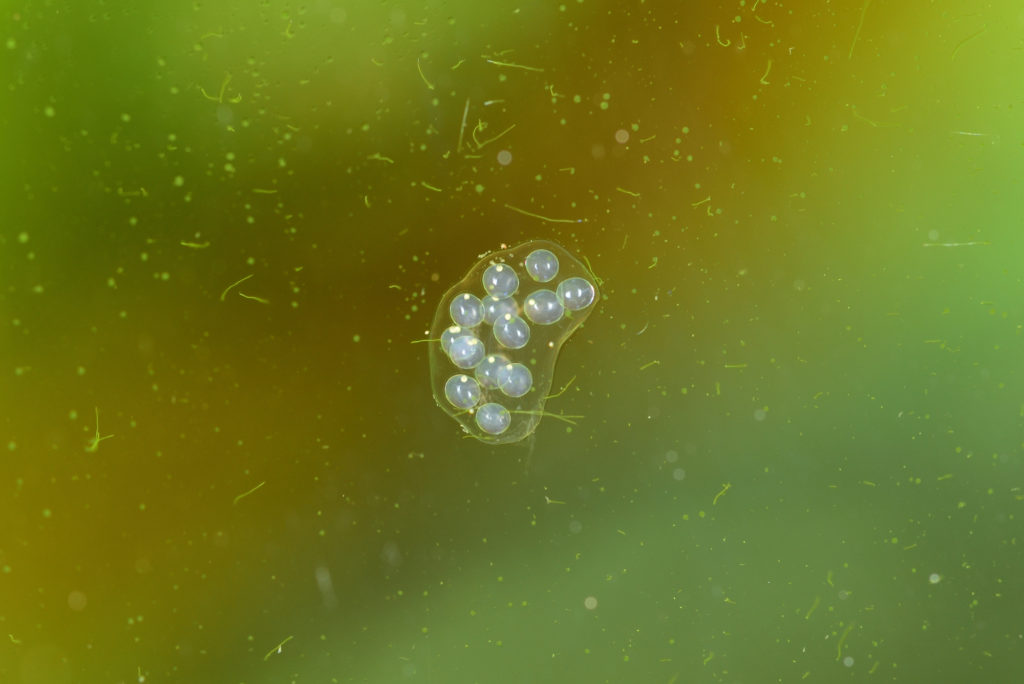 Is that a… snail? But you have never even bought a snail! How could it have gotten into your aquarium?

Unfortunately, this is a story that has been heard too many times. One of the most dreaded things to happen in a freshwater aquarium is an explosion of freshwater snails; if there is one, there are usually more. In this article, we’ll discuss what to look for in order to prevent freshwater snails from hatching in your tank and what to do if it is already too late.

While each species of snail will have different eggs, a case of freshwater snails eggs is pretty easy to identify in a freshwater aquarium where other possibilities (fish, invertebrates, and other livestock) are known. Snail eggs will be clumped together in a clutch and may have a transparent sac that holds them together. The eggs look like clear little jelly bubbles that may have some coloration depending on the species of the snail.

Fertilized eggs will usually change color slightly and start to show dark spots over a short period of time, which is an indication that the yolks are developing. Unfertilized eggs will not change in color, but will start to smell like rotten eggs after some time has passed; usually, after 3-4 weeks, it is safe to say that the clutch was not successful and will not hatch.

How do snails reproduce?

Each species of snail is different, with some being sexual and others being asexual; some asexual snail species even reproduce through hermaphroditic means. If conditions are right, some snail species may lay eggs a couple of times every month.

Where do snails lay their eggs?

One of the main ways that freshwater snails unknowingly enter an aquarium system is by way of live plants. Snails love to lay their eggs on the underside of leaves, which can be very difficult to spot when introducing a new plant into the tank. Eggs can also be laid on other aquarium decorations, rocks, and driftwood; this is why it is always recommended to thoroughly examine, dip, and even quarantine any new items that will enter your tank.

Some species of snail prefer to lay their eggs on the side of the glass. Snails from the Ampullariidae family, more commonly known as apple snails, have both gills and lungs for breathing in and out of the water, allowing them to lay their eggs in different places. A common species of Ampullariidae that you’re bound to come across in the aquarium trade is the mystery snail (Pomacea bridgesii).

What to do with your baby snails and snail eggs

If you find yourself with a bunch of snails eggs or baby snails that have already hatched, you might find yourself asking for help with what to do with all of them. There are a few possible options when it comes to dealing with freshwater snail babies and eggs, such as letting them hatch, using for feeding, or humanely disposing of them.

If you’re currently facing an infestation in your tank, then you can also find more information about immediately removing snails from your aquarium here.

For some, the first sign of snail eggs or snail babies can be the start of a very long battle between controlling snail populations and maintaining a healthy ecosystem. For others, biodiversity is welcomed into their tank and any egg clutch found is an added bonus to the aquarium’s cleanup crew.

Snails are a healthy part of any aquarium system as long as their populations are kept in check. If you’re struggling with algae or other detritus, allowing snail eggs to hatch can be a free method of obtaining the cleanup crew that your tank needs. However, once the algae is gone, the snails will still need to be fed an assortment of algae pellets and wafers as well as blanched vegetables to keep them from starving.

If you’re interested in purposely breeding snails, then check out our breeding aquarium snails guide here!

Some hobbyists even set up a freshwater snail breeding tank to cultivate larger populations! If you have snail-loving species, like puffers that need to keep their beaks trimmed by eating hard food, then you will want your snail eggs to hatch; some other fish that will enjoy a snail egg or snail baby snack is the loach. Baby snails can even be fed to other snails, like assassin snails.

Some freshwater snails species are easier to breed than others, and hobbyists take advantage of this as a way to cultivate their own live food. A separate snail hatchery is not difficult to set up and usually only requires a 5 to 10 gallon (18.9 L to 37.9 L) tank. By providing optimal water conditions and plenty of food, snails tend to lay eggs in no time at all!

One of the biggest benefits of letting your snail eggs hatch is that you get to determine what they’re fed from the point that the adult snails lay the clutch. This means that you have the ability to give your snails the best diet possible, which will then affect the overall health of the fish or invertebrates that will be eating the snails.

Humanely dispose of them

If you really do not want a freshwater snail infestation in your own tank and cannot use them to feed your other fish/invertebrates, then sadly there is only one option left. There is a lot of controversy about the right way to humanely dispose of aquatic life in general, but removing the snails and placing them in a freezer tends to be the most agreed-upon method.

The easiest way to make sure that you get most of the snails out from your tank is by placing a vegetable, like lettuce, in the tank. The snails will be able to smell the food through the water, and will all congregate on top of the vegetable making for easy removal.

However, if you’re trying to prevent the snails from entering your aquarium in the first place, like on a piece of live plant, freezing them won’t be practical. Again, hobbyists have several different methods for dipping live plants. Some of these include making bleach mixes, salt mixes, hydrogen peroxide mixes, or using other pre-made aquarium products.

While these might seem like harsh precautions, it is definitely not unheard of for baby snails and/or egg clutches to still make it into the tank after being dipped.

Snail eggs are pretty easy to identify, the only problem is catching them in time before they hatch and potentially take over your whole tank! Even then, there’s not too much cause for concern as snails are a natural element of freshwater systems and help clean up detritus and algae. If you don’t want additional snails in your tank, then you can always feed your other livestock or humanely dispose of them otherwise.

20 thoughts on “Snail Eggs And What To Do With Them”