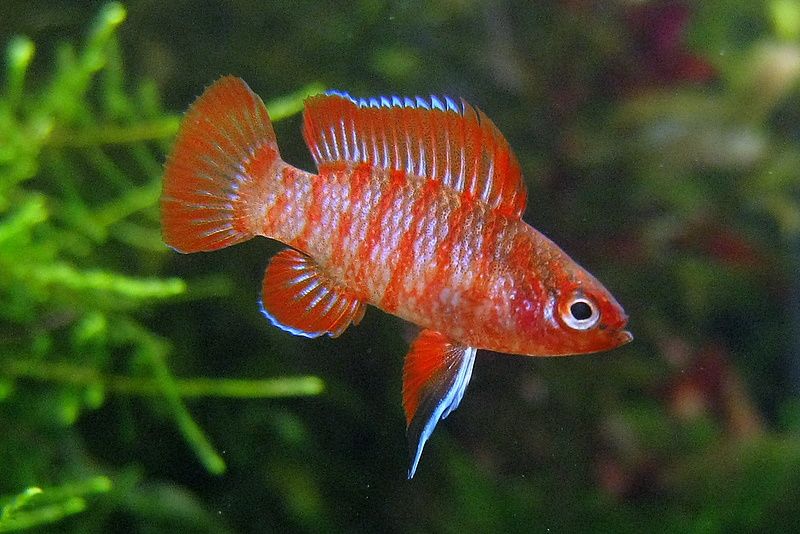 The scarlet badis is the perfect centerpiece for a nano aquarium as they are brightly colored and full of personality. These fish are very small and relatively easy to care for, but special attention will need to be given to make sure that they are getting enough food and not being stressed out by other fish. Because of this, they tend to do best when kept in a species only tank.

Keep reading to find out everything you need to know about scarlet badis care and keeping one of these fish in your own freshwater aquarium!

Dario dario is commonly known as the scarlet badis and may sometimes be referred to as the scarlet gem badis. These fish are the smallest from the superfamily Percoidea, which also contains goatfish, sunfish, sea bass, and perches.

The scarlet badis comes from the tributaries of the Brahamaputra River around West Bengal, India; it is believed that populations could potentially be found in the neighboring country of Bhutan. This water is usually shallow and very clear and dense with vegetation at the margins of the river. The substrate is mostly made up of soft sand and small pieces of gravel.

In the wild, these fish may be found with Badis blosyrus and Badis kanabos, though they will not do well together in the aquarium as we will discuss later.

The scarlet badis has some of the most stunning colors available within the realm of nano species. These small fish do not even grow to 1 inch (2.5 cm) long! Males grow to about 0.8 inches (2.0 inches) while females grow even smaller, only reaching about 0.5 inches (1.3 cm). They are pretty easy to tell apart too, though males are sold much more commonly than females.

It can be very difficult to tell a male from a female when the fish are still juveniles as they don’t tend to be distinctly colored.

What is their average lifespan?

On average, the scarlet badis can live between 3 and 6 years. However, these fish are sadly notorious for dying of unknown causes.

Scarlet badis are one of the few fish that is small and can actually live in a small tank! These fish will require a minimum tank size of 10 gallons (37.8 L). The tank should have lots of live plants, like species of Vallisneriaand Hygrophila. They will appreciate floating plants for extra coverage as well.

There should be plenty of caves made from driftwood and smooth secured rocks; these fish can become very territorial, so it’s better to offer your fish plenty of spaces for them to claim as their own than not have enough.

Water movement should be slow to moderate, with plants being able to withstand the current. Substrate should be fine-grained sand or small pieces of aquarium gravel. Since these fish tend to be extremely sensitive to water parameters, good filtration is a must. For a 10 gallon (37.8 L) tank, it is recommended to have an aquarium filter size graded for at least 20 gallons (75.7 L) or more.

Lighting should be low to moderate and able to support the plants in the aquarium.

These fish need pretty exact water conditions, so always make sure that your parameters are not changing from day to day; always use reverse osmosis (RO) water or distilled water instead of tap water for aquarium maintenance.

How many scarlet badis can be kept in a 10 gallon tank?

Male scarlet badis tend to aggressive towards each other, especially during spawning periods. For only a 10 gallon (37.8 L) nano, it is recommended to only get one male scarlet badis and two or three females to prevent fighting and overcrowding. A larger tank size will allow more males to be added with caution.

Any nano tank smaller in size should not be used to house scarlet badis.

Most hobbyists choose to keep these fish in a nano display with lots of plants and possibly larger species of freshwater shrimp. As we’ll discuss later, these fish can be quite timid and easily outcompeted for food so it is important to get your tank mates right.

But what can be kept with these nano fish if you don’t want to set up a species-only aquarium? Unfortunately, not too much. The only possible tank mate that might be compatible with a scarlet badis is the galaxy rasbora/celestial pearl danio (Danio margaritatus). Other rasboras have been tried to various degrees, though galaxies tend to have the most success. For a full guide on the galaxy rasbora, make sure to check out our care sheet here.

Scarlet badies will do their best in an aquarium with other Dario dario. Male scarlet badis can become particularly aggressive towards other males, so it is recommended to only get one per every 10 gallons (37.8 L); it can be difficult to find females as aquarium stores mostly only sell male scarlet badis.

Can scarlet badis be kept with shrimp?

Luckily, these fish can comfortably live with larger types of freshwater shrimp that can’t easily fit inside the scarlet badis’ mouth. Some popular options are cherry shrimp and Amano shrimp. Be aware that any potential babies will most likely be eaten. There is always the possibility that an adult will be eaten as well.

An abundance of plants and extra hiding spots will help your shrimp escape your scarlet badis if need be.

Can scarlet badis be kept with betta fish?

Many have tried, but these fish are simply incompatible!

So why is scarlet badis care a little more challenging than that of other freshwater fish? It has to do with their natural behavior.

These small fish are incredibly timid and shy and will like to hide among the plants and caves in your aquarium. They can be picky eaters and don’t actively search for food like most other species of fish; it can actually be quite the challenge to make sure that your fish is receiving enough food to stay healthy.

Caves should have some distance between them in case the fish spawn in your aquarium. This will help if you have multiple male fish in the tank who will not hesitate to fight each other during spawning periods. If placing more than one male in the tank, they will need a lot of additional space to establish territories.

There is a black spot on my scarlet badis?

For some reason, many hobbyists describe random black spots appearing on their scarlet badis. If your fish is still acting normal and water parameters are stable, it may just be a coloration that you never noticed before. Regardless, continue to monitor the health and livelihood of your fish closely.

If you notice darkening around their belly, it is possible that the fish is constipated. If this happens, the fish may also look very bloated and may become lethargic. This can usually be treated with supplementing shelled peas or just giving the fish time to expel the blockage.

If constipation and disease/bacterial infection have been ruled out, then there is unfortunately nothing you can really do other than provide the best care that you can. Do regular water changes, keep water parameters stable, and make sure that your fish is getting enough food. Hopefully, the black spot will just be a spot that you’ve never seen before.

The scarlet badis is a very timid and picky eater. These fish have been known to starve to death due to being outcompeted or simply for refusing to eat. This is especially why most hobbyists decide to keep these fish in a species-only tank as they can better monitor each fish while they eat.

Scarlet badis love to eat worms and other small crustaceans. Grindal worms and banana worms should be the main diet of the fish. Interestingly, these fish are more susceptible to obesity when given Tubifex worms and bloodworms, so those should not be offered.

Otherwise, these fish may also eat baby shrimp, insect larvae, and Daphnia. They will most likely not accept traditional fish flakes or pellets, though if they do, they should always be offered meatier foods than not.

Why is my scarlet badis not eating?

These fish are notoriously tricky to get to eat. Finding the best food for your scarlet badis will be difficult and is subject to change at any given point. It is recommended to try target feeding with all aquarium pumps off and removing excess food after 5 minutes. Keep trying different foods until one or two are accepted. Continue introducing new foods until you have a healthy selection to choose from.

Scarlet badis can only eat what fits in their mouth; this means that larger snails should stand up pretty well against your fish. However, baby snails may not be as fortunate.

On their own, baby snails tend to disappear, but scarlet badis will help eliminate both the eggs and the babies. Snails can also be cultured and provided as an additional food source.

Surprisingly, the scarlet badis has been bred in the aquarium setting before despite their somewhat challenging husbandry. There is a good chance that they will breed on their own on the aquarium without any intervention if water conditions and group pairings are favorable.

Usually, one male fish will become dominant in the tank during spawning times. If there is more than one male in the tank, he will be noticeably brighter and more aggressive towards other males. The male will flash his colors to attract a female, and if successful, they will lay and fertilize their eggs usually on the underside of leaves or other decorations. From then on, the male will chase the female away and defend the territory; however, he will not provide care for the eggs and fry, just protect the nest before they hatch.

If you want to increase the likelihood that the eggs and fry are not eaten, it would be best to remove them from the main display and transport them into a new tank with the same conditions. The eggs will hatch after a couple of days and become free-swimming shortly after that. They will be born with an attached yolk sac which they will use to sustain themselves for the first week.

They should be given infusoria until they are able to swallow larger foods. You may need to crush up larger foods before they can accept the whole thing. Once they have grown to a decent size and can hold themselves in a tank with other fish, they are ready to be transferred back to the main tank or given to another hobbyist.

The scarlet badis can be tricky but will work well in a nano tank if proper care is given. Lots of plants and hiding places should be provided for a species-only designated tank. Water parameters should remain as stable as possible, but even then, these fish are likely to mysteriously stop eating and starve.

If you have any questions about Dario dario care or have kept one of these beautiful fish in your own aquarium, don’t hesitate to leave a comment below!