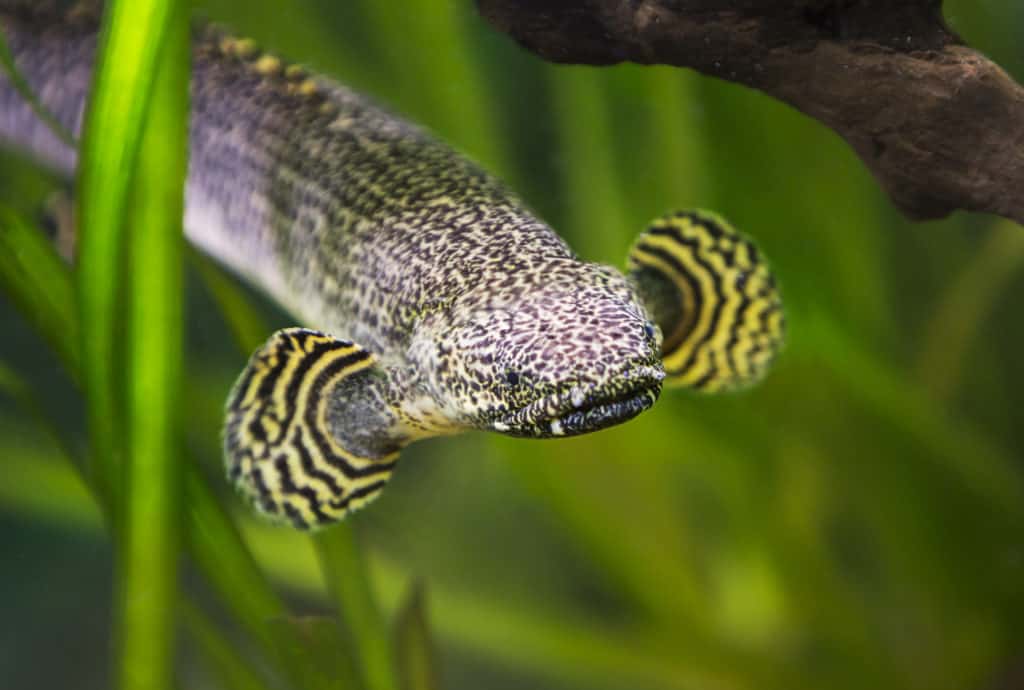 The Ornate bichir, scientific name Polypterus ornatipinnis, is widely regarded as the most attractive of the bichir family. These prehistoric-looking fish are relatively straightforward to keep and make an unusual and pleasing addition to the freshwater aquarium.

The strange-looking fish can do well in a larger tank, which is densely planted and contains plenty of hiding places where these ancient predators can search for food or lay in wait for live prey. Ornate bichirs may be aggressive toward their own kind and other smaller species, and they will eat any invertebrate or fish that will fit into their mouth. For that reason, it’s best to keep your bichir with other large fish of different species.

What is an Ornate Bichir?

The Ornate bichir is a lobe-finned pike, a freshwater species of fish that originates from certain parts of Africa. The bichir can survive out of the water for short periods, being equipped with gills and a lung-like swimbladder that enables the creature to breathe.

The bichir polypterus resembles an eel, although it is actually a species of fish, having a slender body that is covered in hard, bony scales. The fish have dorsal finlets with anywhere between seven to 18 double-edged tips. The remaining finnage consists solely of soft rays. In the wild, the bichir can reach 38 inches in length, although captive specimens are usually smaller in size than that, reaching a length of around 23 inches when fully grown.

Origins of the Ornate Bichir

The Ornate bichir is found in several regions of Africa, including Cameroon, Tanzania, Angola, Congo, Burundi, the Democratic Republic of the Congo, and, more specifically, the Congo River and Lake Tanganyika basins, and Lake Rukwa drainage. The habitat in the bichir’s wild environment includes swampy areas and quiet waters with thick vegetation.

It is thought that bichir polypterus ornatipinnis first appeared around 60 million years ago at the end of the Mesozoic era, and their prehistoric appearance certainly backs up that theory.

Caring for the Ornate Bichir

Provided that the tank conditions are right, these beautiful creatures are relatively easy to care for by an experienced hobbyist.

Ornate bichir polypterus ornatipinnis are solitary, nocturnal hunters that are happiest in a dimly lit aquarium with plenty of sheltered areas in which to hide during the daytime, venturing out at night to feed.

If you want to keep this species, you’ll need a larger aquarium of at least 6ft x 2ft x 2ft. The tank should have a tightly fitting lid. Adult fish bichirs jump or crawl, and are perfectly capable of escaping from their tank in search of food. Be sure to plug any gaps around the top of the tank securely with mesh or filter foam, and weigh down the aquarium lid.

Bichirs are able to breathe air and can survive out of water for short periods. So, you must leave a small gap between the water surface and the cover slides of the aquarium so that the fish can take in air. That’s essential, as the fish may drown if they are unable to breathe air from time-to-time.

To replicate the Ornate bichir’s natural environment, choose a soft, sandy substrate, and decorate it with well-worn rocks and driftwood. Use dense planting and caves to provide shelter and hiding places for the fish.

Keep the lighting in the tank quite dim or diffused by heavy planting. It’s a good idea to use a blue moon lamp that’s timed to come on just before the main tank lights go off. That will enable you to watch the bichir’s nighttime activities.

The filtration system in the aquarium should not produce a strong current, as bichirs are not the strongest swimmers.

The water temperature should be kept between 770 and 820 Fahrenheit. pH levels should be as stable as possible, somewhere between 6.9 and 8.0, with a dH of up to 25 degrees.

The levels of nitrates in the tank should be kept low, so regular water changes and an efficient filter system are essential.

Bichirs are carnivores and are generally reluctant to eat dried foods. That means you’ll need to feed your fish a varied diet of frozen foods, including bloodworms, vitamin-enriched brine shrimp, mosquito larvae, etc. Large specimens enjoy food, such as chopped Mysis shrimp, earthworms, prawns, mussels, and krill. You may also find that your fish may like some dried food, such as sinking carnivore pellets, but these should be soaked in tank water before feeding to prevent these greedy fish from bolting their meal and choking.

Put the food into the aquarium just before the main lights go out, as these fish are most active at night.

Breeding the Ornate bichir is challenging. However, that would make a very interesting project for an experienced hobbyist.

Then, the female fish deposits a few eggs into the male’s cup, where her mate fertilizes them before dispersing the eggs, using sweeping movements of his powerful tail. The sticky eggs adhere to plants where they remain until they hatch, usually within three to four days. Once the fry has absorbed the yolk sacs, they swim free. At that time, you can offer the fry baby brine shrimp. The fry will grow multi-branched external gills, which are lost as the fish mature.

Here are some frequently asked questions posed by hobbyists who are considering taking on an Ornate bichir.

Q: How big do Ornate bichirs get?

A: Adult Ornate bichirs can reach 38 inches in length in the wild. In captivity, specimens are generally smaller, attaining a size of around 23 inches long.

Q: What do ornate bichirs eat?

A: Bichirs like a range of meaty foods, including bloodworms, krill, shrimp, prawns, mussels, and mosquito larvae. Also, you can feed a mixture of live and frozen food.

Q: What size tank does a bichir need?

A: Ideally, you should provide a large tank of at least 6ft x 2ft x 2ft for this species.

Q: What is the smallest species of bichir?

A: The smallest bichir is the Senegal bichir, measuring about 14 inches in length.

The Ornate bichir is a species of ancient, primitive fish that is found in certain regions of Africa. These carnivorous, semi-aggressive fish are best-suited to a spacious aquarium with other larger fish of a different species.

Although this is a fascinating fish, they are not the most straightforward to keep and are perhaps best-suited to the experienced hobbyist.