Nerite Snail vs Mystery Snail? Which One Should You Pick? 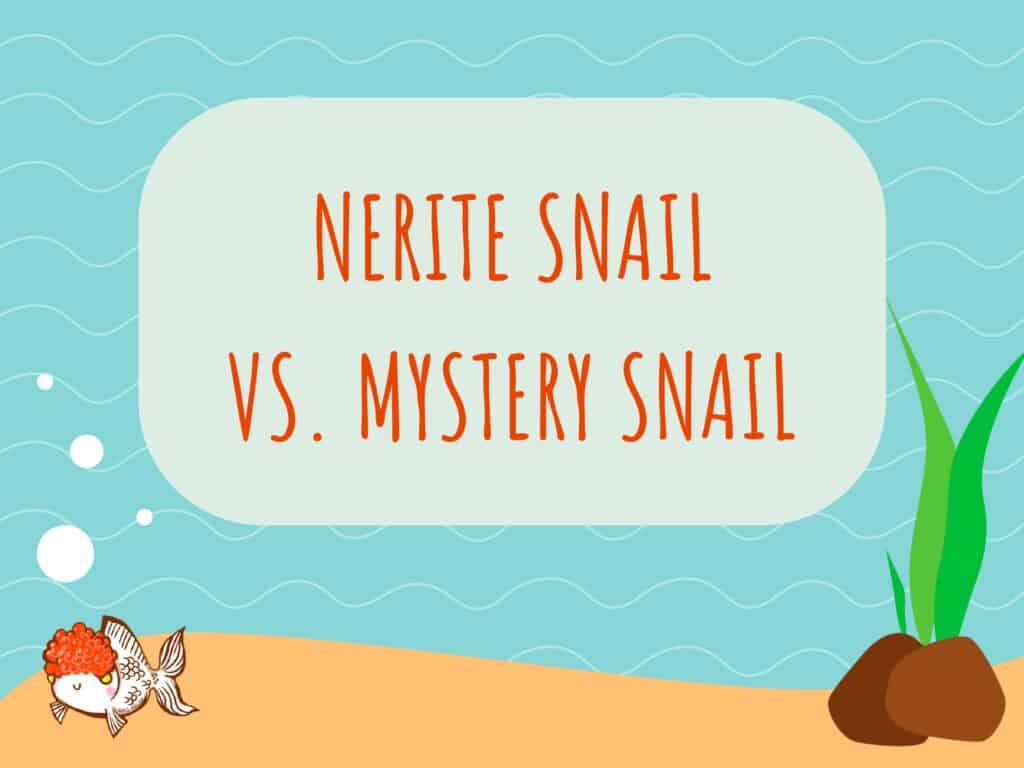 Are you considering adding a snail to your freshwater tank, but you don’t know which type is the best fit? Perhaps you’re debating between a nerite and a mystery snail. Both are attractive options, but they do have significant differences.

A key difference between nerite snails and mystery snails is that it is much harder to breed nerite snails. To ensure the baby snail’s health, they require brackish water during development. However, mystery snails reproduce very easily and will thrive in freshwater environments.

In this article, I’ll compare and contrast the two types of snails, considering factors like appearance, size, temperament, and compatibility with other tank inhabitants.

What Sets a Nerite Apart from a Mystery Snail?

The first thing to understand is the difference between taxonomy. “Nerite” is a family of small to medium-sized snails that live in both saltwater and freshwater habitats. However, their most obvious physical feature is they have a gill and an operculum, or modified foot used for closing off their shell’s entrance.

Also, the nerite family contains several unique species of snail that can add spice to any aquarium, such as the tiger nerite snail, black racer nerite snail, or zebra neritidae snail.

While they’re mostly marine creatures who enjoy brackish water, a very small number of nerites can be found living in freshwater habitats too. For optimal health, these snails require hard alkaline water to live in.

Mystery snails originate in South America with the majority living in Peru, Paraguay, Brazil, and Bolivia. In addition to this geographic data, they are freshwater creatures as they commonly reside in swamps, ponds, rivers, and streams.

The shells of nerite snails are thick and rounded, while those of mystery snails are thin and smooth. However, both types can come in various colors and patterns.

In addition to solid-colored shells, nerite snails also have plenty of patterned options to choose from which can include: stripes; dark green or black ridges; or tiny dots that are round and dark.

Interestingly, nerite snails boast quite a few color combinations. In fact, some researchers believe that this distinctive coloring is the result of “stimulation of the snail mantle’s secretory cells by the activity of the animal’s central nervous system.”

On the flip side, most mystery snail shells lack patterns, instead featuring various colors in combination. Typically, these snails are dark-colored animals, brown, black or blue, and have white or dark slate feet.

For example, the olive nerite snail is a small species; it only measures 0.5 inches at most. In contrast, the zebra and tiger nerite snails are considerably larger and twice as big as olives.

In addition, the horned nerite snail is the smallest species of snail, with its smaller side measuring 0.25 inches and its largest measuring 0.5 inches.

While nerite snails can typically grow to be as big as a dime or quarter, mystery snails have been known to reach up to 3 inches in size.

Nerite snails are pleasant creatures that stay out of trouble. They often get along well with fish, bettas especially, but sometimes bettas can become aggressive towards them.

You should always monitor your snail to ensure they’re not being targeted by other creatures in the tank. These guys are tiny, gentle souls who go about their day without causing any problems for others.

Like the nerites, mystery snails are peaceful creatures that mind their own business. However, due to their small size, they can become snacks for other creatures like fish who tend to nibble on them from time to time. So when choosing tank mates for a mystery snail, be careful!

Although they vary in personality, most mystery snails are relatively calm animals that need a lot of space for roaming and other activities. They can be amusing creatures to watch as they move about the tank and perform little tricks.

Nerite snails are not difficult to care for. In fact, their maintenance is on the same level as any other snail – they can live in freshwater that has a temperature between 72 and 78 degrees Fahrenheit. Also, the pH level of their tank water should be around 7.5, as they prefer slightly alkaline water conditions.

Lastly, nerite snails need a 5-gallon tank while mystery snails require 10 gallons to thrive. If you want more than one nerite snail, be prepared to increase your tank size accordingly.

Unlike nerites, mystery snails need more care as they produce a lot of waste. This will quickly unbalance the pH levels of your aquarium water and create other chemical imbalances.

To avoid this, you should do weekly cleanings and use aquarium kits to maintain the proper water conditions. For decorations, mystery snails need sand, gravel, or pebbles to make movement easy. Also, make sure the tank has plenty of live plants to recreate their natural habitat.

If you get a nerite snail, your aquarium will always be clean due to its feeding habits. They are herbivores and detritivores that love algae, mainly green spot algae, hair algae, brown algae, or green dust algae. Actually, these boys will work all day long cleaning your tank!

Additionally, you can feed your nerite snail with algae wafers or blanched vegetables like carrots or zucchini. To prepare vegetables, boil or steam them for about a minute to make them easier for your snail to chew.

Mystery snails have a fairly simple diet and enjoy eating algae, though they aren’t as fond of it as nerite snails. You can feed your mystery snails blanched carrots, peas, spinach, cucumbers, or zucchini.

Further, you should have calcium test kits on hand because mystery snails are especially susceptible to shell cracks. In order to stop this from happening, you can provide them with a diet that is richer in calcium.

Beware, nerites reproduce a huge amount! All snails have a high reproduction rate, but with nerites, you can expect to see countless small white eggs (about the size of sesame seeds) glued onto everything in the aquarium.

While most of these eggs are unfertilized and won’t hatch, removing them can be challenging. In addition, they don’t require males to reproduce as the females are entirely capable of producing eggs independently.

In contrast to nerites, mystery snails have high reproduction rates, but their eggs are not painful to get rid of if they become a hazard. Also, female mystery snails can reproduce on their own, and lay pink eggs on the surface of the water.

However, the eggs are large, visible, and usually adhere to one another in a cluster. Therefore, they’re easy to scoop out if you don’t want any more snails hatching in your aquarium. Further, it’s important to note that the eggs will only hatch when placed in brackish water – not fresh water.

Nerite snails and mystery snails can get ill if the water tank doesn’t have the proper conditions they need to live. Here are some common health problems they may encounter:

Cost of Keeping As a Pet

Nerite snails are more wallet-friendly than mystery snails, for several reasons. They don’t breed often because they need very specific water conditions to do so. In addition, nerites only consume algae – which is easy to find and inexpensive – and regularly clean their tanks by eating all the algae present.

On the other hand, mystery snails grow faster and larger, so you’ll need to change their tank more frequently. Also, they reproduce quickly, so there may soon be too many for just one fish tank! If you’re considering keeping them as pets, remember that they are picky eaters, so feeding them can be quite expensive.

So, which is the right snail for you? Ultimately, it depends on your budget and how much work you want to put into caring for these tiny critters. But with a little know-how and some care, either nerite snails or mystery snails will make great pets!

Which Is Better for a Beginner: the Mystery Snail or the Nerite Snail?

If you’re a beginner, the size of your tank will determine which snail species is best for you. If you have a smaller tank, I recommend nerites.

Are Nerite Snails the Same as Mystery Snails?

Depending on the size of your tank, nerite snails and mystery snails can live together. However, it’s important to keep an eye on the water quality in your aquarium and adjust accordingly if conditions become unfavorable for either species.

Are Nerite Snails Worth It?

Nerite snails can be a great choice as pets, especially if you’re new to snail-keeping. They are easy to take care of, and they require less maintenance than mystery snails.

Mystery snails are excellent algae eaters and can be a great choice for aquariums with lots of algae growth.

Mystery snails are great at keeping tanks clean and can be a good choice for aquariums that tend to get dirty quickly.

As you see, nerite snails and mystery snails both have unique benefits and drawbacks. Ultimately, it comes down to your own personal preferences and what you want from your pet snail.

Whether you opt for nerite snails or mystery snails, these tiny creatures are sure to bring a lot of joy and companionship into your life!?

I hope this information has been helpful, and good luck with your pet snail! If you still have any questions, feel free to leave a comment below.?