The Fish That Eat Duckweed – Our Informative Article 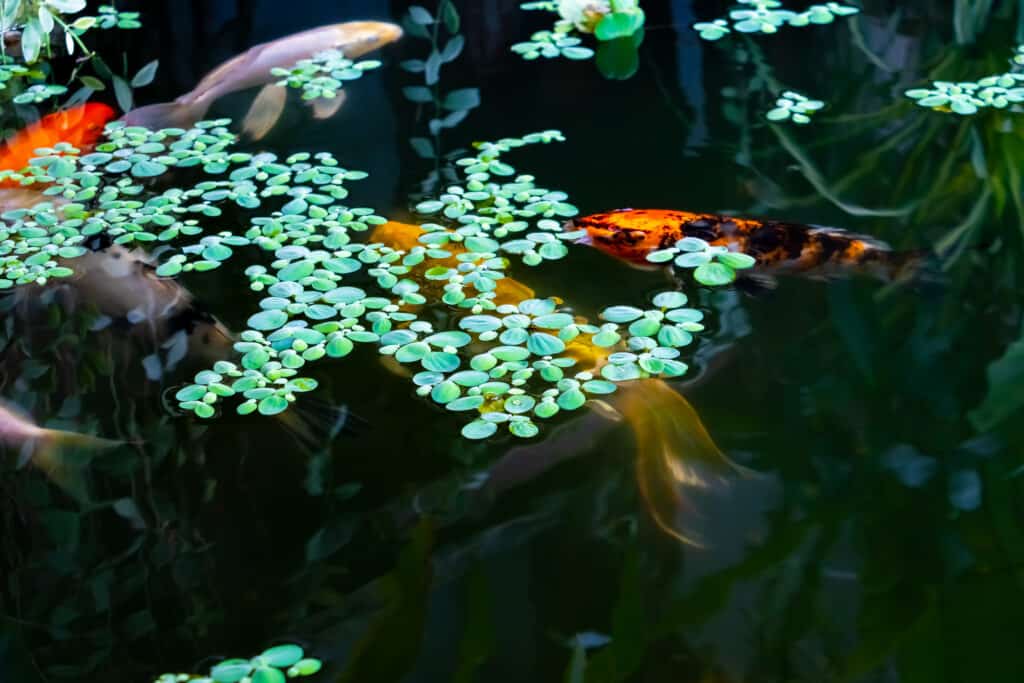 Fish that live in ponds or other slow-moving bodies of water are more likely to eat duckweed. From bettas to mollies, many fish will have a duckweed snack.

Some people with ponds even add fish to solve duckweed problems.

Many betta fish keepers cannot plant duckweed in their aquariums because their bettas eat it all!

Duckweed is a tasty snack that one fish keeper describes as “floating salad” and it can give bettas valuable nutrients – like fiber and protein.

Bettas also love duckweed growths because they are floating plants that provide shade and remind them of their natural habitat.

They love tearing duckweed apart as much as they love eating it as a snack.

Keeping duckweed in your aquarium can help keep your cichlids busy and curb their aggressive tendencies.

It can also keep them full between meals.

Corydoras and Other Catfish

Corydoras, also called cory catfish, love duckweed because it provides sources of shade. They’ve also been known to nibble at the plant from time to time.

Although most catfish are bottom feeders, they will occasionally swim to the surface for a snack of crisp greens.

Catfish also love plant matter, so they’ll be quick to eat any part of the plant that falls to the bottom of their indoor tank.

Goldfish love eating duckweed so much that people keep goldfish in their ponds just to keep duckweed in check.

Duckweed is part of the goldfish’s natural diet, and the dietary nutrients inside help them produce their vibrant gold color, too.

Guppies are small, and they have small appetites.

While they might nibble at duckweed in their tank, they are unlikely to eat large portions of it.

Nevertheless, you can use duckweed to make homemade guppy food. Simply mix duckweed with brine shrimp or insect larvae, dry the mixture, and the guppies will eat up the crisp, flaky results!

Grass carp were imported to the United States to keep duckweed and other plants under control in bodies of water across the country.

It also provides a welcome snack to these ornamental beauties.

As long as the duckweed doesn’t grow faster than the koi can snack, these fish love having duckweed in their ponds.

Loaches are scavengers and opportunists, so they will eat anything they can find in their tanks.

If you add some duckweed to your tank, chances are your loaches will have a nibble.

Like bettas, mollies will eat all the duckweed available in their tanks – often to their owner’s laments.

Mollies feed at the surface of their tanks, so duckweed looks like food. They must think it is tasty, too, because they eat it so quickly.

Don’t worry about your mollies eating too much duckweed. It is totally safe for them to consume.

If you think they might be overeating, you can skip feeding for a couple of days while they play in and snack on the duckweed.

Make sure to feed them their regular food as well, however, because mollies cannot survive on duckweed alone.

Tilapia love eating plants, including duckweed. On fish farms, duckweed makes up about half of the tilapia’s diet.

Unlike other fish, tilapia can also live on duckweed alone.

Still, farmers feed tilapia other sorts of food because it helps them grow big enough to eat.

As you can see, all sorts of fish will eat duckweed – either as a snack or a main part of their diet. If you still have questions, read these FAQs to get a better understanding:

What Kind of Fish Will Eat Duckweed

It’s a fast-growing tasty treat that fish keepers and farmers can take advantage of.

Small fish like bettas, mollies, and corydoras eat duckweed. Even guppies will eat duckweed if you mix it with brine shrimp or insect larvae!

Is Duckweed Good for Fish?

Yes. Duckweed is a naturally occurring treat that is packed with essential nutrients, and many fish eat it in the wild.

Duckweed also contains lots of protein, so some fish can live off duckweed and nothing else.

What Fish Can Live with Duckweed?

Most fish will appreciate some duckweed in their tank or pond, even if they don’t eat it.

Just be careful – duckweed grows really fast, and it can quickly block out the light of the sun in a pond or trap waste and harmful chemicals in a fish tank.

Is It Safe for Fish to Eat Duckweed?

Yes. It is perfectly safe for fish to eat duckweed, as long as you make sure their other nutritional needs are met during regular feeding.

Also, be careful that duckweed doesn’t grow too quickly and take over your tank because this can create health hazards for your fish, as well.

If your fish lives in a pond or its natural habitat is a slow-moving body of water, it will probably enjoy a duckweed snack.

Even if your fish doesn’t want to eat duckweed, it will probably appreciate having plant life in its tank.

Because duckweed grows so quickly, introduce it a little at a time.

If you want to limit how much your fish can eat or keep the plant under control, consider growing your duckweed within a feeding ring.

Where to Buy Duckweed

You can buy duckweed at your local pet store or order it online.

You may also be able to harvest it from a nearby pond.

Many people consider duckweed a pest, so they will happily give it away for free.