The Chopstick Snail – The Facts, Figures, and Habits! 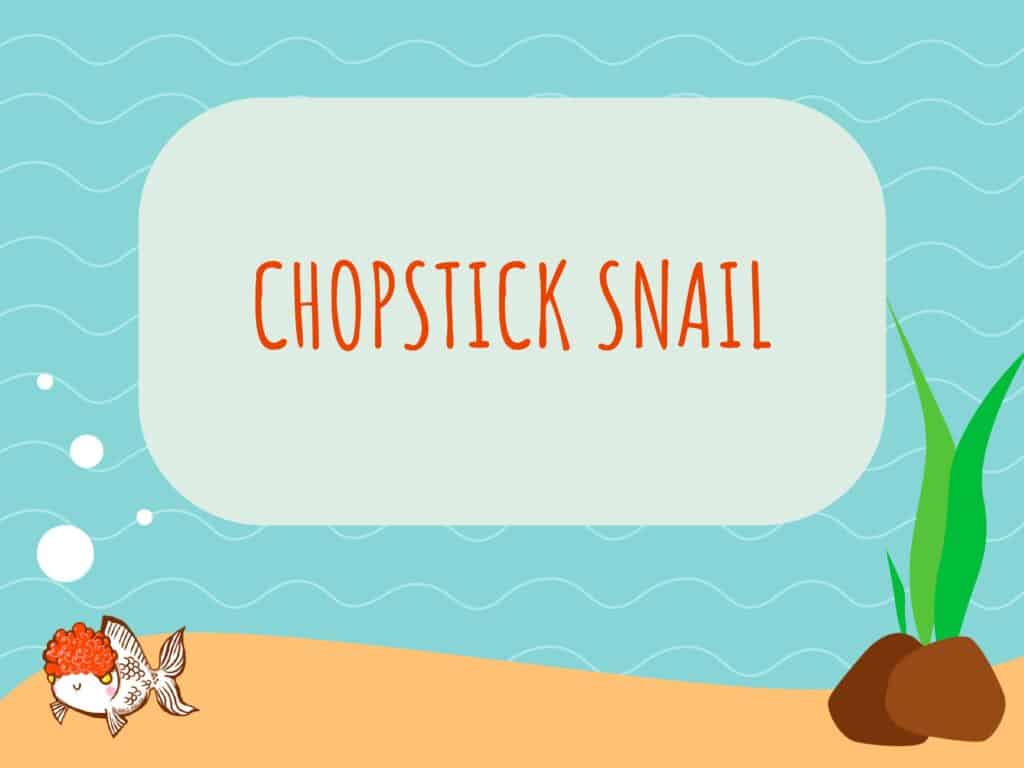 Sometimes you come across a new aquarium species that makes you wonder why you hadn’t heard about it before.

If you’ve never come across the Chopstick Snail before, you’re in for a treat. This gorgeous species of tropical freshwater snail is not only beautiful but also a dream to keep. Here’s why.

Stenomelania torulosa, the Chopstick snail, is a beautiful, hardy, and easy-to-care-for species of freshwater snail. By eating up leftover food, algae, and detritus, it also does an amazing job of keeping your aquarium clean.

Unlike other snails such as mystery snails and pond snails, this species doesn’t breed in freshwater and therefore will never over-populate your aquarium. It also stays away from eating live plants and other invertebrates, which makes it an excellent choice of aquarium snail for beginners and experts alike.

Stenomelania torulosa is a member of the Thiaridae or Trumpet Snail family. It has a very wide geographical range, spanning much of Southern Asia and even Northern Australasia. Despite its broad range, the chopstick, or ‘long nose snail’ remains a fairly enigmatic mollusk – there’s seldom little research on its natural habitats and behavior.

What we do know, however, is how it behaves in an aquarium, and it ticks many of the boxes you’d like for an amazing pet snail.

The chopstick snail is a very peaceful invertebrate that won’t prey upon other snails, like assassin snails and spixi snails do.

Like many other aquatic snails, chopsticks snails are chiefly nocturnal by nature, and can often be seen burying themselves in the substrate during the daytime to rest in a peaceful, safe place away from harm’s way until night returns again.

This burrowing behavior is actually tremendously useful in the aquarium because as the snails burrow, they turn over the gravel and release decaying matter and gasses that would otherwise become increasingly toxic if allowed to remain trapped.

One of the most interesting and attractive features of chopstick snails is their incredibly long and pointed shell. The end of the shell is so thin that you might imagine it to be fragile and brittle, but in fact, their hard shells are rarely damaged.

This peaceful snail ranges in color from light olive to dark brown and has a beautifully spiraling shell. The whorls are well-defined and can number up to 14 in a large, fully-grown specimen.

Chopstick snails sit within the branch of aquatic snails that have an operculum (trap-door) that they can completely close if they are disturbed by a predator.

Chopstick snails are fairly large aquatic snails and generally grow to around 2-3 inches in captivity. Exceptionally large individuals can occasionally form shells as long as 4 inches – quite an impressive spectacle!

Little is known about how long Stenomelania torulosa live in the wild, but in captivity, they typically live to around 3-4 years old. This compares favorably with nerite snails and mystery snails which often don’t reach their third year.

While they can be kept in smaller tanks, I’d recommend a minimum of a 10-gallon tank to house your chopstick snails. They are large, active snails and will appreciate the extra room to move around in.

And what’s more, larger tanks are much easier to maintain stable water conditions and will have a longer-lasting supply of algae and other foods for your snails to scavenge.

Chopstick snails prefer a water temperature of between 72-84 Fahrenheit, which is perfectly compatible with most tropical freshwater fish in a community tank.

They prefer a pH of 7-8 and a water hardness of 1-12 dGH. If water is too acidic it may make their shells more brittle.

Chopstick snails are mostly active in freshwater and may retract into their shell and become temporarily dormant if salt is introduced to the aquarium.

Snails tend to be hardy creatures that can tolerate a wide range of water conditions. Still, your chopstick snails will need a filter in their tank to keep the water clear and ammonia levels within a safe range. In a small tank, a simple sponge filter is ideal.

These snails breathe through gills rather than a lung, so require relatively high oxygen levels to thrive.

It’s a good idea to have sufficient lighting for live plants and algae to thrive in any tank that hosts snails. As this species of snail is mostly nocturnal, they’ll tend to come out when your lights are turned off anyway.

As always with an aquarium, it’s important to provide at least 12 hours of night-time for the inhabitants’ wellbeing. Use a timer switch if you’re not always around to turn lights on and off.

In the wild, chopstick snails are found on sandy substrates. While fine gravel may also allow them to dig and burrow, larger gravel and pebbles will be difficult to shift for these snails are therefore unsuitable.

Chopstick snails will really appreciate having plenty of live aquatic plants in the tank with them. Live plants help to regulate good water conditions and the dead leaves provide sustenance for your snails.

Rocks and stones will also add surface area for algae to grow and will make your tank more interesting.

While driftwood and Indian almond leaves can also be an attractive feature, be sure that you’ve removed the majority of the tannins before you include them. Since tannins make the water more acidic, driftwood and dead leaves could render your water out of the suitable pH range for this snail.

Chopstick snails are large snails with hard shells and a protective ‘trap door’ that they can close if they feel threatened. In this regard, they are a very well-defended species of mollusk and can be kept alongside most community species of tropical aquarium invertebrates and fish.

Exceptions would include large, boisterous fish such as oscars, clown loaches, convict cichlids, goldfish, and Bala sharks that could eat or play with your snails. Invertebrates such as assassin snails and crayfish that prey upon snails should also be avoided as tank mates.

When it comes to feeding, you couldn’t ask for a more flexible member of your aquarium. Chopstick snails will eat just about any kind of dried or frozen food that falls to the bottom of your tank, alongside their perennial diet of algae, biofilm, dead plant matter, and detritus in the substrate.

Unlike other common freshwater snail species such as the pond snail and giant Columbian ramshorn snail, the chopstick snail is well-behaved and won’t eat live plant leaves unless they’re already dying.

These snails are brilliant at cleaning your aquarium substrate, plants, décor, and glass from excessive algae, but if your tank lacks algae, then these snails may be grateful for the addition of some sinking algae wafers to snack on too.

Very little is known about snail pathology, especially in an obscure species like this! In general, the chopstick appears to be a relatively hardy type of snail and should remain in good health providing that the water temperature and conditions are kept stable and within their preferred range.

As a general note on snail health, it must be noted that all species of snail are very sensitive to copper. Even low levels of copper compounds in the water could adversely affect snail health or kill them, so it’s prudent to always check the ingredients on fish medications for copper before adding it to a tank with snails in.

Unlike some other species of snail, chopstick snails are not hermaphrodite, but gonochoristic (either male or female). Telling them apart, however, is no easy feat – males and females seem to look identical!

The reproductive cycle of chopstick snails may well surprise you. This species is not known to have been bred in captivity, and the complexity of its cycle could explain this.

Instead of laying eggs, the adult female snails carry the eggs with them in a brood pouch (you can think of them as snail kangaroos!). The eggs then hatch out, not into baby snails, but into a type of larvae known as ‘veliger larvae’.

These tiny organisms are swept from the freshwater of the adult snail’s habitat into the brackish, salty lagoons downstream. The larvae stay there to feed on microplankton and only return to freshwater once they’ve completed their transformation into the adult form.

Because of this astonishing and complex process, chopstick snails are in no danger of breeding in a freshwater aquarium – which may be a relief, considering how fast some other snails can overrun a fish tank!

Chopstick snails are not as commonly seen in pet stores as more popular aquarium snails like nerite snails, apple snails, ramshorn snails, or rabbit snails. Since they’re so difficult to breed in captivity, you may have to visit a specialized online store to find them.

And Lastly – Keep a Tight Lid On Your Tank!

Like other species of aquatic snails, chopstick snails can get adventurous from time to time and attempt to escape your aquarium! Unless you want to find a squashed snail under your foot in the morning, you’d better secure the tank’s lid on nice and tight.

If your snails are floating for long periods on the surface of the water or trying to escape, ask yourself what may be causing them to want to flee. Check your aquarium’s temperature, oxygen levels, and water parameters to make sure that your snails have a healthy environment where they can remain happy.

Chopstick snails may be less common in the aquarium trade than other types of snails, but perhaps they deserve a more prominent place among popular aquarium mollusks.

Their lovely long spiral shells and ability to keep the tank clean are good enough reasons to welcome this snail into your aquarium. They’re also comparatively hardy, long-lived, and can add a splash of novelty to your fish tank.