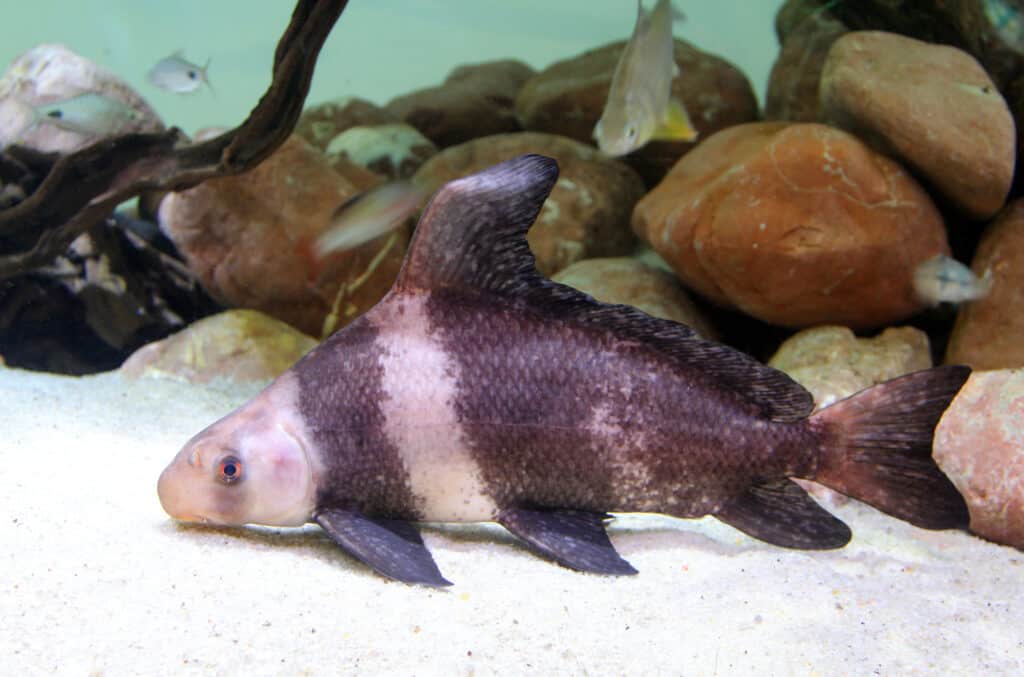 The Chinese High Fin Banded Shark is a fish that looks especially cute when they’re young – perhaps you’ve seen them scurrying around the bottom of the tank in a pet store.

But if you think they’d make a nice addition to your community tank, think again! This fish quickly grows to over 4 feet long, with dramatic appearance changes as they grow older.

Furthermore, wild populations of these fish are under great pressure, and you may contribute to their decline if you buy them from a store.

Let’s take a closer look and learn all about this fascinating fish.

The Chinese Banded Shark comes from the basin of the River Yangtze in China – a gorgeous river that I was lucky enough to visit several years ago!

It is a member of the fascinating Catostomidae or ‘Sucker Fish’ family, which is a part of the carp clan. Interestingly, the Chinese Banded Shark is the only member of the suckerfish family to be found in Asia.

Sadly this species is much less common in the wild than it used to be, owing to overfishing, pollution, and its collection for the aquarium trade.

It’s important to consider if you’re thinking about owning this fish since it is now on the Chinese Red List of Threatened Species. It is even locally extinct in some territories it used to occupy.

The River Yangtze is a fast-flowing river and stretches over some very high altitudes at the edge of the Himalayan mountain range.

This means that the Chinese Banded Shark is most familiar with fairly cold, well-oxygenated water.

While there may be some slower-moving pools in its natural environment, this fish needs some current to feel at home.

Having visited the upper reaches of the Yangtze river, I can tell you that the local landscape and the river bed are very rocky, so we can assume that this fish will enjoy some smooth rocks and caves to graze from and hide in.

The appearance of the Chinese Banded Shark changes dramatically over time. In its juvenile phase, it has attractive black and pale gray vertical bars across its flanks and an enormous, triangular dorsal fin that seems quite disproportionate to its body.

This giant dorsal fin gives the Chinese Banded ‘Shark’ its scary name. Still, this is a peaceful fish from the suckerfish family, meaning its other common names like ‘Chinese Sailfin Sucker’ and ‘Topsail Sucker’ may be more appropriate.

Actually, this fish has many different names, and I’ll refer to a few of them over the course of this article.

As the fish ages, its famous shark-like fin doesn’t keep up with the rest of its explosive body growth! After 5 years, this fish can already be two feet long, and its once huge-looking fin is now much more in proportion with its body.

The distinct banding pattern on its flanks also disappears as the fish becomes darker in color at around 2-3 years of age.

Some aquarists have disparagingly called this fish the ‘reverse ugly duckling’ since it starts out looking attractive but soon turns into a less remarkable-looking fish.

In fact, as adults, they don’t resemble sharks at all and appear more like flat-bellied carp.

The Chinese Banded Shark can easily be 8 inches long in its first year and 20 inches long by year three. And it doesn’t stop there.

You can see why this fish has been exploited by humans as a food source when you consider an adult can weigh up to 88lb!

Join the club if you think that sounds a bit big for your aquarium. This fish needs an enormous tank even to have room to turn around, so it’s normally only suitable for public aquariums and garden ponds with a strong current.

How Long Does The Chinese Banded Shark Live?

Not only do Chinese Banded Sharks grow to epic size, but they also live to a ripe old age! A healthy specimen can have a lifespan of up to 25 years in the wild.

Remember, this is a member of the suckerfish family – some of its relatives can live to over 100 years of age!

In captivity, however, their life expectancy is much lower, at only 10-15 years or so, which reflects that fish might be less than happy in most captive environments.

The Chinese Banded Shark’s size makes it impossible for most aquarists to keep them.

Sadly, those who buy the cute little shark-looking fish in stores often don’t realize that their baby will soon turn into a titan, often growing longer than the tank itself!

If you did happen to have a 500-gallon tank to host a few of these fish, you might also find they have different requirements to the other fish in your tank. Let’s take a closer look at why.

As I’ve already hinted, the minimum size tank you’d want to keep a Chinese Banded Shark in would be 500 gallons.

Even though you might be able to squeeze an individual specimen into a tank smaller than that, these fish much prefer to live in groups, and it’d be exceptionally cruel to keep one alone.

A 500-gallon tank is 7 feet long, so you’d need a lot of space and experience!

The difficulties with keeping these enormous fish in an aquarium have led some people to try to keep them in their garden ponds.

This, after all, is a coldwater fish that has to cope with low temperatures in its natural habitat. But with a maximum length of over 4 feet, you’d even need a large pond for that!

Remember that the Chinese Banded Shark likes a strong current and well-oxygenated water.

This means you’ll have to find a strong pump for your pond to circulate the water and create enough flow for this fish to remain healthy and happy.

As mentioned, the Chinese Banded Shark hails from the mountainous regions of the Yangtze river.

This rocky landscape needs to be replicated in the aquarium or pond where you intend this fish to live.

Gravel is the obvious substrate choice, with many rocky enclaves scattering the pond or aquarium floor for the fish to hide in.

A few tough, cold water plants will also help to keep the water fresh and well-oxygenated.

The Chinese Banded Shark is a cold-water fish species – it requires water temperatures similar to that of its native range.

This varies greatly during the year, so anywhere between 55-75 Fahrenheit would be suitable indoors.

Outdoors, if your pond temperature begins to dip below 55 Fahrenheit – don’t worry.

This fish will naturally enter dormancy at temperatures between 40-55 Fahrenheit. However, this sucker fish’s immune system may be compromised if it gets colder, meaning they’re more likely to succumb to infections and diseases.

As you can imagine, being such a large freshwater fish in the carp family, the Chinese Banded Shark will produce a lot of waste!

To deal with this, you’d need a powerful canister filter, plenty of partial water changes, and tank cleaning.

This member of the suckerfish tribe is mostly vegetarian but will eat just about anything that comes its way!

This fish is a bottom feeder and will spend much of its time scouring the substrate for food and grazing algae.

If your tank or pond doesn’t grow much algae, then feeding an additional algae source is essential since algae constitute a large part of the Chinese Sucker’s natural diet.

But since an adult specimen can weigh over 70lb, you might need more than a few packs of algae wafers to do this! Growing your own source of algae may be the only feasible option.

The Chinese Banded Sucker is a social species of fish that likes to be kept in groups.

In the wild, these bottom-dwelling fish like to form small schools that move around the Yangtze river and its tributaries together. Being in a group

helps them to feel safe and secure, so it’s essential that they’re never kept alone.

The Chinese Banded Sucker is a gentle giant who is remarkably docile and tolerant of other fish.

They are more active during the night than the day and may spend much of the daytime hiding in caves.

Remember that this peaceful fish is omnivorous, so it could potentially snap up any slow-moving smaller fish that comes its way! (Beware Corydoras catfish!)

For tank mates, you need to consider other fish who will enjoy the same conditions as the Chinese Sucker.

This fish likes cool water that moves fast, so it is best kept with other coldwater fish from mountain rivers and streams.

Coldwater Loaches, such as Weather Loaches, may make a good match, as could some species of Sturgeon.

You might also consider other members of the carp family, such as roach, rudd, or tench, for pond setups.

The Chinese Banded Sucker reaches sexual maturity at around 6 years old, giving them many years to reproduce.

But breeding this fish in captivity is no easy feat. In the wild, these fish migrate to smaller rivers and streams to spawn, so sadly, this natural phase of the fish’s life is wholly lacking in a domestic environment.

Some breeders are reported to have tried dosing the fish with hormones to induce breeding, but information on captive breeding is very scarce.

If you’ve done the math, you’ll realize that since this fish is so difficult to breed, most of the specimens sold in the aquarium trade must come from wild populations.

This is shocking news, given that the fish is on the red list of endangered species.

To be a responsible fish keeper, you must ask the supplier where they sourced their Chinese Banded Sharks. Buying a wild endangered species only creates more market demand for more to be caught, which you definitely don’t want to be responsible for.

Some Better Alternatives to The Long-Finned Banded Shark

If you’d love to have a shark-like pet fish but don’t have a 500-gallon tank handy, you’ll be pleased to know there are some more suitable options!

Bala Sharks, Red-tailed Black Sharks, Roseline Sharks, and Rainbow Sharks are all smaller fish from various families but are united in how they superficially resemble true marine sharks.

My favorite, the Long-finned Apollo shark, is not often seen in pet stores, but I had a wonderful time keeping one for several years.

Most of these ‘ freshwater sharks’ still get quite big, and some are also aggressive or even predatory, so it’s worth researching before buying one!

As I pointed out in the breeding section, you must be incredibly careful when sourcing this fish.

The Chinese Banded Shark is not a popular fish that you’ll find in every store, and when you do, you need to ask some questions about where the fish came from.

If a trusted supplier can confidently tell you that the fish came from captive breeding, you can buy a group of them.

But if there’s any doubt about their origin, stay well clear. You don’t want to be supporting the exploitation of a fish already at risk of extinction.

If you’re sure you can safely accommodate a few of these fish for the duration of their long lives, then each young fish would likely cost you $10-30.

If You Want A Pet Shark, There Are Better Alternatives For 99% of Fish Keepers!

But there are many things to consider before buying a group of them.

Their huge size and need for cold water make them unsuitable for most fish keepers. And their status as an endangered species means that you must be especially prudent when sourcing this fish. In general, this fish is better left to public aquarium specialists.

If you’d love to have a pet shark-like fish but don’t have a 7-foot-long tank, there are plenty of other options! Check out our specially dedicated page on freshwater aquarium ‘sharks’ here.