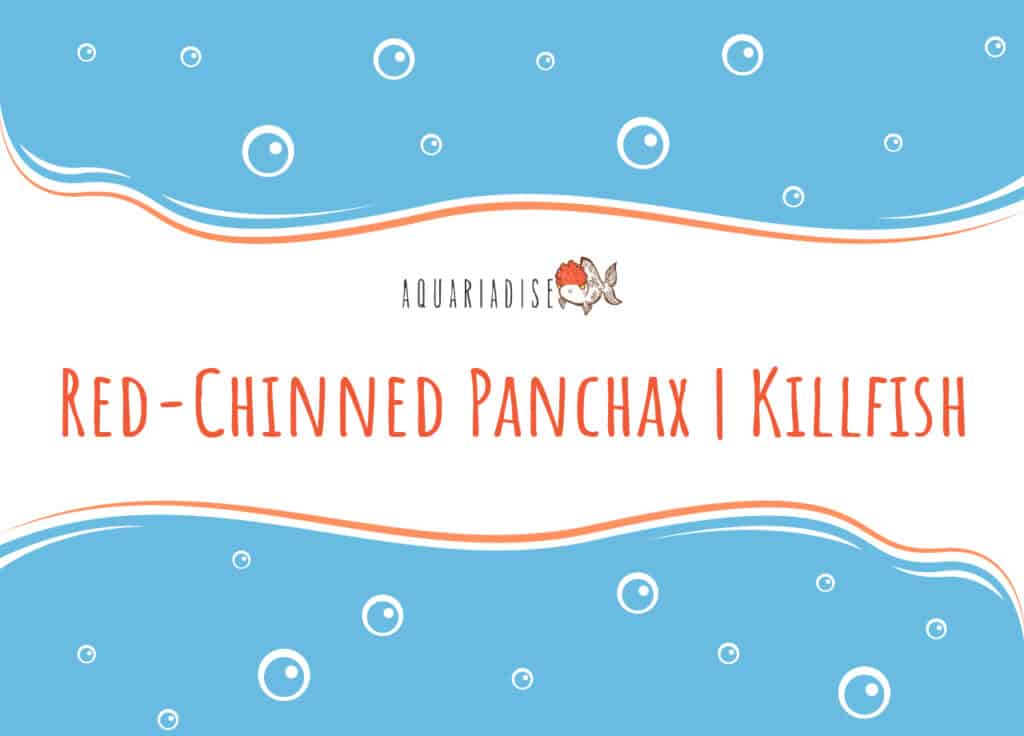 If you’ve never kept killifish before but are still looking for an interesting group fish for a community- or species only aquarium, you’ve found it! These fish are a great place to start: they’re suitable for most communities and easy to breed, and their behavior towards their own species is very fun to watch.

Keep reading for everything you need to know about keeping red-chinned panchax in your own aquarium!

West Africa. They are mostly found along the coast in swamps and rivers. Their habitats are dark and overgrown with heavy vegetation; the water is usually very slow flowing and calm. In an aquarium, Red-chinned Panchax appreciate similar conditions.

Red-chinned Panchax are a non-seasonal killifish that grow to a maximum size of around 4,5 cm (1,8 inch). They are similar in appearance to other killies, with an upturned mouth, light brown body and dark brown vertical stripes. Although they have less vibrant colors than their cousins, clown killies, red-chinned panchax are beautiful fish that can really brighten up an aquarium.

Males can be told apart from females by the iridescent colors on their fins (yellow and blue) and their bigger size. The most obvious difference, though, is the bright orange chin, which explains their common name.

Epiplatys dageti is not a difficult fish to keep and it can do well in some community setups. When they’re young they’re usually quite peaceful, although this changes when they age, so be sure not to combine them with very peaceful fish that need calm tankmates or with very small fish. In smaller and medium sized setups it’s also a good idea to let the killies have the top water layer to themselves. Suitable tankmates would be larger tetra and Corydoras species or dwarf cichlids.

Because Red-chinned Panchax should be kept in groups of at least around 6 fish, an aquarium of 20 gallons (75L) or more is a good idea. The surface should be calm; if your filter flow is too strong, it’s best to baffle it to prevent stress. (Floating) plants like water lettuce can also be used to lessen the strength of the filter flow and are appreciated by the fish because they provide extra cover.

These killies are predators. Their upturned mouth indicates that in the wild, they mostly eat small insects they find at the water surface. In the aquarium they can be fed regular flakes or small pellets, but it’s also important to offer frozen foods like brine shrimp or mosquito larvae or even live foods like fruit flies.

Fish fry and small shrimp will also be preyed upon, so you may not want to keep your Red-Chinned Panchax with dwarf shrimp!

Like other Epiplatys species, these killies show interesting behavior and are fun to keep and watch. The video above shows their breeding behavior. As they grow older and become sexually mature, the males will form territories. They are quite protective of these spaces and their females, and you’ll frequently see them displaying their dominance and fighting. This has lead to their status as ‘aggressive fish’, but the fights are limited to their own species and are never fatal.

If you want to make sure your Red-chinned Panchax display their natural behavior, stick to a realistic habitat and a decent group size. Like most group- and schooling fish, they will become shy when kept in groups that are too small.

Breeding these killies is not too difficult. Many hobbyists report them breeding without any effort on their part!
A separate breeding tank, usually with 2 females for every male, works best. If the fish are healthy adults, you will likely see them start displaying breeding behaviour quite quickly. The eggs are deposited on spawning mops or fine-leaved plants like Java moss, so make sure there are plenty of these in the tank.

It’s as easy as that! If there are multiple males, they will fight each other to defend their territories. Females will be chased and courted and you’ll start seeing eggs within a few days/weeks. Once the fish have spawned, it’s a good idea to remove the spawning medium and raise the fry in a separate setup to prevent them from being eaten by the parents. As with most small fry, infusoria can be used as food in the beginning; after this, newly hatched brine shrimp are a good option.

If you have any more questions about red-chinned panchax or want to share your own experiences with these feisty killies, don’t hesitate to leave a comment below. Happy fishkeeping!