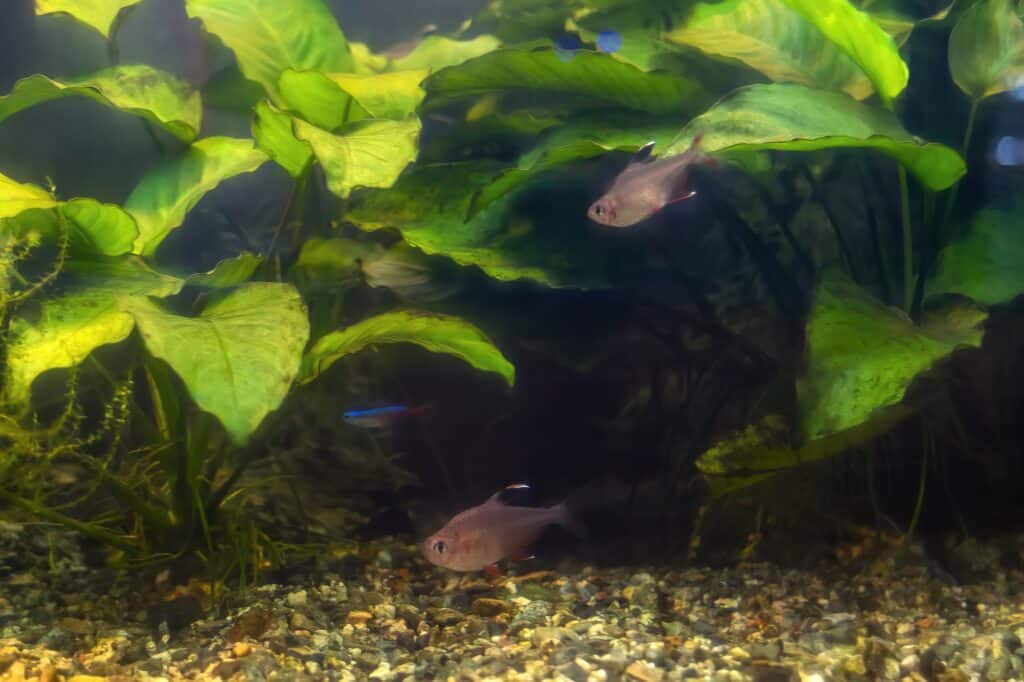 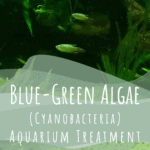 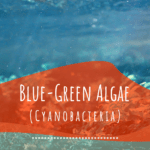 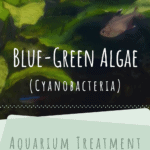 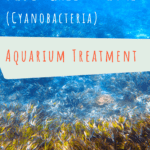 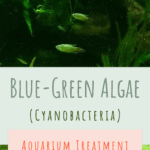 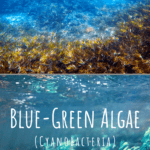 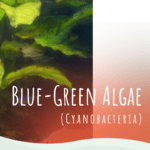 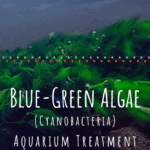 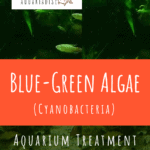 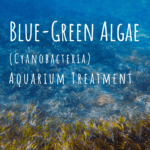 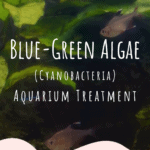 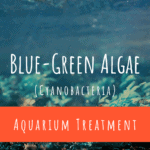 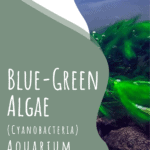 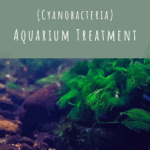 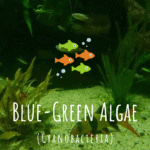 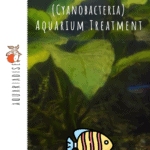 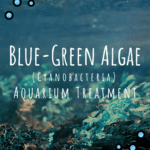 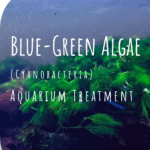 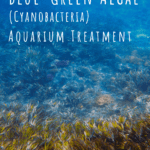 If you notice a strange blue-green colored slime growing all over the surfaces in your fish tank, or perhaps detect an odd smell with no obvious source, you may have an outbreak of blue-green algae on your hands.

So, what is this blue-green growth, what causes it, and how do you get rid of this revolting, slimy gunk for good?

Read this guide to eradicating blue-green algae to find out.

What are blue-green algae?

Blue-green algae are more correctly called Cyanobacteria. Cyanobacteria are not algae at all but rather a phylum of photosynthetic bacteria that live in water and moist soil. These bacteria are one of the most ancient living things on the planet, with some of the fossilized specimens found in Western Australia in Achaean rocks dating back over three million years.

The bacteria can be filamentous or unicellular, and some of the species form large colonies, growing quickly to cover the aquarium substrate. If you disturb the algae, it comes away in sheets that smell unpleasantly fishy or swampy. The algae are slimy in texture. Hence it’s sometimes called smear or slime algae. In severe cases, the algae collect in a scummy foam on the water surface. Yuck!

As suggested by its name, the algae are usually blue-green, but they can also be black, greenish-brown, or even red in color.

Some species of these bacteria are toxic to fish and other creatures. Fish kills can sometimes happen indirectly, too, as the bacterial colonies can suck out the water’s oxygen, effectively suffocating the fish. However, there is a species of Cyanobacteria called Spirulina that is edible and nutritious for fish.

Although Cyanobacteria produce oxygen through photosynthesis, they can also convert N2 (inorganic nitrogen) into ammonia, which is very bad news for your fish and places an additional burden on your biological filtration system too.

What causes an outbreak of blue-green algae?

Cyanobacteria are an incredibly resilient life form, largely because of their simplicity. The bacteria make use of light waves that aren’t used by higher forms of plant life and subsisting on organic waste products, such as dissolved nitrates and phosphates that are often found in abundance in fish tanks. Blue-green algae can exist in a wide range of temperatures, too.

Outbreaks of Cyanobacteria typically happen when there are very high levels of waste and nutrients in the aquarium water, particularly phosphates and nitrates. In particular, phosphate is a major contributor to the growth of blue-green algae in an aquarium.

Excess amounts of nutrients and dissolved fish waste in the water are usually caused by infrequent water changes, failure to vacuum the substrate regularly, overcrowding, and overfeeding. Sometimes, the problem can occur in new tanks where the biological filtration system is immature, and the essential colonies of beneficial bacteria are not yet established.

Also, in some areas, the tap water is very high in phosphate, encouraging Cyanobacteria’s growth in your aquarium. However, the bacteria can still take hold, even in the best-maintained tank.

However, the main causes of outbreaks of blue-green algae remain:

Unfortunately, Cyanobacteria can lay dormant for thousands of years until the optimum conditions occur when the blue-green algae bloom.

How to get rid of Cyanobacteria

Unfortunately, blue-green algae can be extremely difficult to get rid of once they take hold in your fish tank, but there is some practical, hands-on action that you can take.

That course of action should decrease the amount of algae overgrowth and remove the nutrients that support it. If there’s still a problem with Cyanobacteria or algae’s general growth, you will need to repeat the process. It’s important to understand that the blue-green slimy growth will return if you don’t remedy the underlying causes permanently.

Maintain a clean, healthy aquarium by carrying out regular water changes, vacuuming the substrate, and changing filter media when required.

How to get rid of blue-green algae naturally

Although it’s possible to eradicate blue-green algae by using chemicals, which we’ll discuss later in this guide, you may prefer to take a more eco-friendly approach.

First of all, you need to remove as much of the slimy algae as you can. You can do that by using an algae scraper, siphon, or an old toothbrush. Unfortunately, there’s no point in recruiting a clean-up crew to help you, as most animals won’t eat blue-green algae.

Carry out frequent water changes, clean your filters regularly, reduce overcrowding, and make sure that you’re not overfeeding your fish. It can also be effective to improve the flow through the tank by switching to a stronger filter, adding a powerhead, or switching things up by moving equipment and decorations so that the flow isn’t buffered.#

Unfortunately, blue-green algae are not eaten by algae-eating fish species, even plecostomus. However, the Ramshorn snail is the most effective and efficient creature when it comes to eating Cyanobacteria. The main drawback is that you would need a very large collection of snails to get rid of the blue-green algae entirely in a major outbreak.

If you have a marine or a reef tank, the Red Reef Hermit Crab is a useful creature, as it happily gobbles up Cyanobacteria.

Cyanobacteria produce their own nutrients through photosynthesis, using the energy from the lights in your tank to help convert organic waste into a useable form of food. Since blue-green algae use light wavelengths that are not utilized by higher-order plants, you can attack the menace by eliminating or reducing those wavelengths, making it difficult for the algae to grow and propagate.

If you have older tank lighting, it’s most likely now emitting light at a slightly altered wavelength than it did at the beginning of its life. As bulbs age, the light they emit becomes less powerful and of a lower wavelength. That light decay can cause a 420 to a 460-rated bulb to cast light in the nanometer range of 560 to 620 within just one year. And that 560 to the 620-nanometer range is the light range that causes blue-green algae to proliferate.

If you replace the bulbs that you currently have in your tank with balanced 6,400K to 14,000K or actinic 50,000K bulbs, that will immediately reduce the amount of useable light available for the Cyanobacteria. You could also use an ultraviolet light sterilizer to eradicate any free-floating bacteria, which will get rid of the problem within a week or so. However, replacing the light bulbs in your setup every nine to 12 months is just as effective and will prevent a resurgence of blue-green algae.

Avoid direct sunlight in the tank

Too much light in the aquarium, especially direct sunlight, is a major cause of cyanobacteria and algae growth.

If possible, don’t have your fish tank in a location where the sun hits the aquarium at any time during the day. In fact, we recommend that you don’t have your tank somewhere that the sun will shine on it, as that can cause severe fluctuations in water temperature, which could harm your fish or even kill them.

Lowering the tank temperature to below 76o can be effective at slowing the growth of bacteria while you attack it from other angles. However, that can only be done if you’re running a freshwater tank, as temperature changes in a marine tank can cause your corals and fish stress that could potentially harm them.

If you prefer to attack the algae chemically, you could try using an antibiotic treatment.

It can be very effective to use the antibiotic treatment, erythromycin against blue-green algae. That drug will kill the cyanobacteria and get rid of the nasty, slimy growth in your tank.

However, erythromycin will also kill off the beneficial bacteria that your biological filtration system needs to function efficiently, so you should use the antibiotic with care, and monitor the levels of ammonia, nitrites, and nitrates very closely throughout the course of the treatment and immediately afterward.

Although the chemical treatment approach will undoubtedly, literally, within a few minutes of being added to the tank, the dissolving of Cyanobacteria can create highly toxic materials to fish and invertebrates in the environment, that has reportedly led to massive fish death events in some tanks, which in turn created renewed optimal conditions for a renewed blue-green algae break out.

So, for those reasons, we suggest that you take the all-natural approach to rid your tank of blue-green algae.

How to prevent blue-green algae in your aquarium

So, you’ve learned that cyanobacteria are extremely difficult to shift once they become established in your tank. Therefore, any steps that you can take to prevent an outbreak of this troublesome form of algae are well worth the effort.

One good way of preventing any form of algae from taking hold is to keep your aquarium scrupulously clean by thoroughly vacuuming the gravel every week and carrying out partial water changes.

If you don’t keep the water clean, nitrates and phosphate levels will increase, encouraging many species of bacteria and algae to grow and become established. Simply by changing 25% of the water every week, you’ll keep levels of those nutrients low, effectively starving the algae and preventing it from proliferating.

Overfeeding your fish is one of the primary causes of excessive nutrient levels in the water, which can contribute to the growth and spread of algae and cyanobacteria.

Most fish species only need two feedings per day. Give your fish just enough food to keep your fish busy for a couple of minutes. If you can still see food lying on the substrate after five minutes, you’re overfeeding your fish.

The Cyanobacteria were living on nitrates in the tank water, so once you’ve removed that, you can expect a spike in nitrate levels. That’s caused by the beneficial bacteria in your biological filter, working to replace the tank ecosystem’s Cyanobacteria. Be sure to carry out additional water changes of 10 percent every other day for up to two weeks to reduce nitrate levels back into the safe range below 20ppm.

Blue-green algae are a real unsightly nuisance in the aquarium, covering your decorations and substrate with a layer of disgusting slime that’s extremely difficult to shift.

You can get rid of Cyanobacteria by keeping your tank super-clean and having the water in pristine condition, as well as limiting the amount of light that the tank receives, especially direct sunlight. Be sure that you don’t overfeed your fish or overstock your tank to limit the number of available nutrients for the algae to feed on.