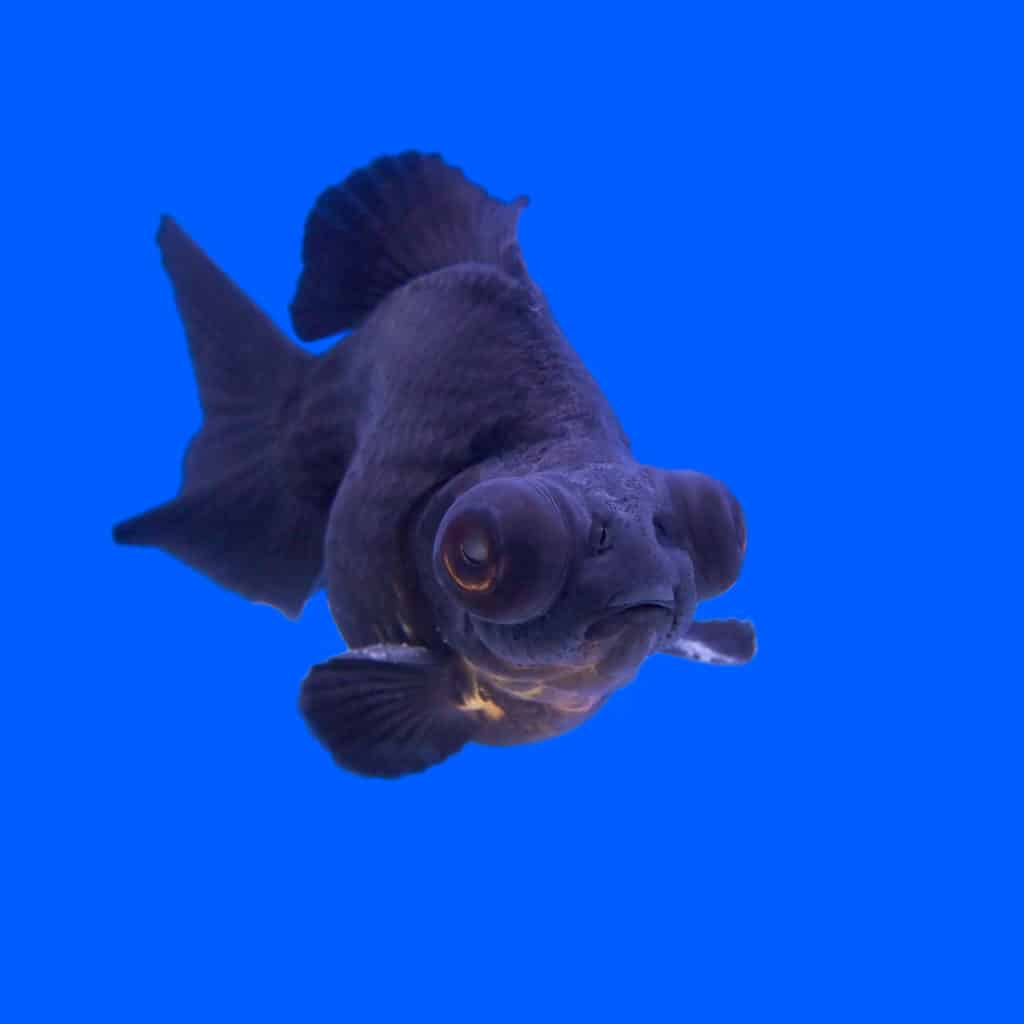 You’ve seen orange goldfish, red goldfish, and maybe even calico goldfish, but have you ever seen a black goldfish? Black moor goldfish can make a bold and beautiful contrast with more commonly-colored goldfish but are just as peaceful and require the same care as most other goldfish varieties.

Keep reading to find out everything you need to know about keeping black moor goldfish in your own aquarium!

Black moor goldfish is a type of fancy goldfish (Carassius auratus); fancy goldfish are ‘fancy’ because they feature some type of outstanding feature: these fish may be more rounder than regular goldfish, have flowier fins and telescope eyes, or other body modifications and specialized markings.

Black moor goldfish may also be referred to as black telescope goldfish, moors, black moors, or blackamoors. Interestingly, it is believed that this fish was named after a specific group of people from the Middle Ages.

Black moors do not exist in the wild and are the product of many generations of selective fish breeding. These fish are derived from a wild carp species known as the Prussian carp, which can now be found throughout Europe, North America, and Asia. It is believed that the first carp fish were caught around parts of China during the 1400s.

The black moor goldfish is pretty easy to identify from among other types of goldfish! All you have to do is look for a fish that has a black body and two telescope eyes. Some may have some orange or gold on their bellies, but for the most part, these fish are almost completely black.

In general, black moors can grow to 6-8 inches (15-20 cm); however, as with all goldfish, it is always possible that your fish will easily surpass these estimations. They will also grow very round and will take on an egg-shape, which will slow down their movements through the water. Their bulging large eyes also means that they have poor eyesight, but black moors actually have less-protruding eyes than normal so eye infections are less common.

Black moors will live just as long as any other type of goldfish, with the likelihood of reaching 10-15 years and 20 with exceptional water quality and tank maintenance.

Like other goldfish varieties, black moors make a lot of waste and can dirty tank water very quickly. For one black moor goldfish, the minimal tank size recommended is 20 gallons (76 L), with 30 gallons (113.5 L) being even better. Every additional fish will also need an extra 10 gallons (38 L).

Since these fish are not the best swimmers, it is also recommended to get a long tank as opposed to a tall tank. A tall tank may make it difficult for your black moor to swim to the surface to eat, and a long tank will give your fish more overall swimming space!

It is also not recommended to add too much decoration to the tank for the same reason. Your black moor may be struggling enough to swim on its own and added obstacles won’t make it much better! If you really want to add plants in your tank, either real or fake, make sure to place them towards the back and keep them pruned to leave the main swimming area open for your fish.

Goldfish are a coldwater species of fish, so an aquarium heater is not required for your black moor. Water temperature should remain between 65-72° F (18-22° C) with pH between 6.0-8.0. Ammonia is the most important water value to keep at 0 ppm and can be challenging to maintain since goldfish create so much waste; however, any trace of ammonia in the water is toxic and will hurt or kill your fish.

In order to control waste from building up, weekly water changes are a must. Remove 25-30% of the water from your tank at the same time every week, and replace it with new RODI/distilled water. Gravel should also be regularly vacuumed during water changes to remove any stuck particles.

Ammonia can also be maintained through a good filter. In general, it is recommended to get an aquarium filter that is meant for two times the suggested tank size; so for a 20 gallon (76 L) tank, a filter rated for 40 gallons (151 L) is recommended. While you can’t go too big with a filter, you can get too much water flow in your tank.

Remember, black moors are not very good swimmers, so make sure your fish are not getting pushed around by strong water current in your tank.

Black moors should be kept with other peaceful and slow-moving tank mates. Fin-nippers and more active fish will stress out your black moor and can cause fin rot and other infections if not monitored.

Good tankmates would be other calm fancy goldfish types like fantail goldfish, lionhead goldfish, or other telescope goldfish.

Like all goldfish, black moors are omnivorous fish. This means that you should offer your fish a balanced diet of plant- and animal-based foods. You may also find your black moor nibbling at some algae that you might have in your tank, though they should never be used to control any algae problems.

If feeding fish flakes, make sure they are specifically made for fancy goldfish. Round-bodied goldfish, like the black moor, are prone to swimbladder issues and a good high-quality fancy goldfish food can help prevent digestive problems. Fish flakes should also be supplemented with frozen and freeze-dried foods like bloodworms, brine shrimp, daphnia, and tubifex worms.

Freeze-dried foods should always be presoaked in some tank water before feeding your black moor; this will help your fish digest the food and should help further prevent them from becoming constipated.

Black moor goldfish are pretty easy to fish to breed in a tank setting. Like all goldfish varieties, black moors lay eggs and will start to spawn when the water temperature rises.

It is best to move your breeding pair into a separate tank with plenty of plants and other surfaces where your fish can lay its eggs. Gradually reduce the temperature to 60° F (15.5° C), and then start to warm it again at a rate of 3° every day until the fish start mating around 68-74° F (20-23° C). While doing this, also change out 20% of the water every day.

The female black moor will lay her eggs and the male will fertilize them. Spawning can take several hours and the female fish can lay up to 10,000 eggs! Once you notice eggs, move both fish back to your main display or else they will quickly eat the eggs. In about a week, the eggs will hatch and will immediately be able to swim freely. Feed small high iron and high protein foods until they are large enough to eat the same food as their parents in about two month’s time.

When your baby fish are large enough to hold their own after a couple of months, you may put them in your pond or display aquarium or give them to another hobbyist.

Black moor goldfish are relatively easy to keep if you have experience with goldfish; they don’t require as much space as other varieties of goldfish and don’t tend to get that big. However, like other goldfish, a black moor will create just as much waste.

As long as you don’t add more fish than your aquarium and filtration can handle, then the docile and beautiful black moor goldfish may be the next fish for you!

If you have any questions about your black moors’ fish care or have kept a black moor in your own aquarium, don’t hesitate to leave a comment below.