Goldfish Breeding: The Secrets Each Aquarist Should Know! 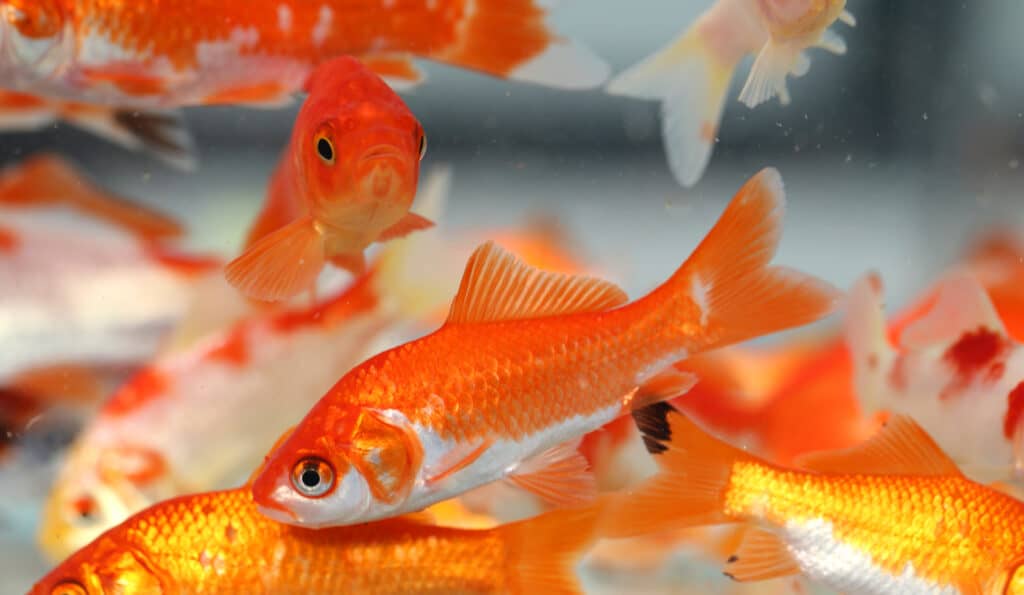 Breeding is one of the most advanced parts of fish-keeping, so if you’re here, congratulations! We’re pleased to join you on your fish-keeping journey and can’t wait to tell you everything we know about goldfish breeding.

Is It Easy To Breed Goldfish?

No. Breeding goldfish in captivity is difficult and requires much preparation and patience. Sometimes, even experienced goldfish keepers do not have any luck.

How Often Do Goldfish Breed?

Goldfish only spawn 2 or 3 times per year in the spring, so you only have a few chances to get everything right (and a limited amount of time to make the magic happen).

While breeding goldfish is not easy, it is not impossible, either. The goldfish breeding process is well-documented, and tons of information is available on the internet.

Of course, not everything you read on the internet is true — or safe for your fish.

In this blog, we have done our best to get you all the reliable information you need in one place!

The most important part of breeding goldfish is sexing them, or finding out whether your fish is male or female.

To determine the gender of your fish, wait until they are sexually mature (or at least one year old) and take a close look at them. In particular, take a look at their vent (goldfish genitals).

Male goldfish also develop “breeding stars,” or “breeding tubercles,” which look like white pimples on their gill covers and pectoral fins. Further, males have longer, narrower fins and firmer bodies, and female goldfish are more round and squishy.

Goldfish also behave differently depending on their sexual dimorphism. Most notably, male goldfish tend to chase females around.

Fortunately, “the chase” signals that your goldfish are ready to breed.

Unfortunately, this behavior is not an ideal way to tell your goldfish’s gender because males will chase each other around if there are no females in the tank!

Will Goldfish Breed in a Tank?

Goldfish breed all by themselves in ponds, but it takes a little more work in tanks. Your goldfish will breed in a tank only if the conditions are exactly right.

You will need the following:

Place at least two sexually mature goldfish into one stable, properly cycled tank to breed your goldfish. Remember, one goldfish must be male, and one must be female, or you will not get any goldfish babies (called fry).

Some breeders prefer to place a larger group of fish together during the breeding season to maximize their chances, but you should only do this if you have plenty of room! Also, you should not exceed five fish (three males and two females) in a tank, and you should always have more males than females.

Some breeders also try to separate males and females immediately before it’s time to breed so they are more eager to see each other (if you know what we mean).

No matter what, it’s important that you get started early.

Get your fish used to their tank long before springtime (ideally during summer).

When the time comes, mirror springtime conditions by feeding more abundantly (without overfeeding) and slowly using your heater to raise the water temperature.

Introduce tasty food like live black worms or brine shrimp, then raise the temperature one or two degrees each day until your tank is between 68 and 74°F.

You may also want to get some mood lighting going by extending the time you keep the lights on or brightening your lights to indicate long warm spring days.

Soon, your fish will be ready to find love.

How Do You Know When a Goldfish Is Breeding?

Your goldfish are ready to get it on when the female looks fat, the male gets fish pimples (or breeding stars), and the fish start chasing each other around. (Kind of like teenagers?)

The female looks rounder because she is full of eggs, and the male is chasing her around (and poking her in the belly) because he wants her to release them!

Once the female releases her eggs, the male will release sperm on top of them.

The sticky eggs will end up on plants (or your breeding mop if you put one in the tank), then it’s time to remove the goldfish or place the eggs into a separate fry tank.

Breeding mops are designed to transfer the eggs to a new tank easier, but moving the adult fish is sometimes even simpler.

Ensure both tanks are set up to accommodate eggs and fry (clean, cycled, oxygenated, and without harsh fans or filters).

Do Goldfish Eat Their Babies?

Yes, goldfish who breed in tanks have a bad habit of eating their babies, so you need to remove parents soon after spawning and fertilization.

Alternatively, you can remove the eggs and place them into a separate tank, where they will hatch into fry.

How Many Babies Do Goldfish Have?

Female goldfish can lay up to 1,000 eggs at once, but not all of these eggs will be fertilized, and even fewer will hatch.

Further, only about 30% of the fry that hatch make it to adulthood, so don’t be discouraged if some of your baby goldfish die.

You may even have to cull (kill) some fry if they are unhealthy or your tank gets too crowded.

What Do I Do With My Fry?

If your goldfish eggs hatched (usually takes two to seven days), congratulations! You did it. Now, you might be wondering what to do with your fry.

For the first few days of their lives, the answer is… nothing!

Fry live off their egg sacks for their first phase of life. They will swim around the tank looking for food when they want you to feed them.

Goldfish keepers often disagree on what to feed the fry. Some say they should only eat baby brine shrimp. Others say they are not ready for solid food and should be fed drops of dissolved egg yolk, and others still say they can just eat small amounts of what grown-up goldfish eat.

It’s up to you what you feed your baby goldfish — just make sure whatever you feed them is in tiny, bite-sized pieces. Remember to keep your tank clean and avoid overfeeding, as well.

Do not use a regular filter when you have fry in your tank, as it could suck the babies right up. Instead, use a gentle sponge filter and add oxygen to the tank with an air stone.

As your fry grow into fish, they will need more and more room, so you should invest in a large tank (or multiple tanks) or consider selling some of your goldfish babies.

Always separate fish before they mature sexually; you could risk accidental inbreeding and increase the risk of disease and deformities.

Should I Breed My Fish By Hand?

We cannot recommend breeding your goldfish by hand unless you are an advanced, experienced, or professional breeder. Even more professional than our hobbyists at Aquariadise.

If you want to become a professional goldfish breeder and practice hand breeding, look further than the internet and consult an expert for mentorship and assistance.

When a mommy fish and a daddy fish have ideal springtime conditions, they might release and fertilize some eggs that grow into fry!

It’s up to you to create these conditions and supervise breeding.

We hope these tips and tricks help you with your first (or second… or third…) round of goldfish breeding.

Feel free to browse our site for care guides and equipment recommendations for all kinds of fish, including goldfish and betta!