How To Best Care For An Arrow Crab: Everything You Need To Know 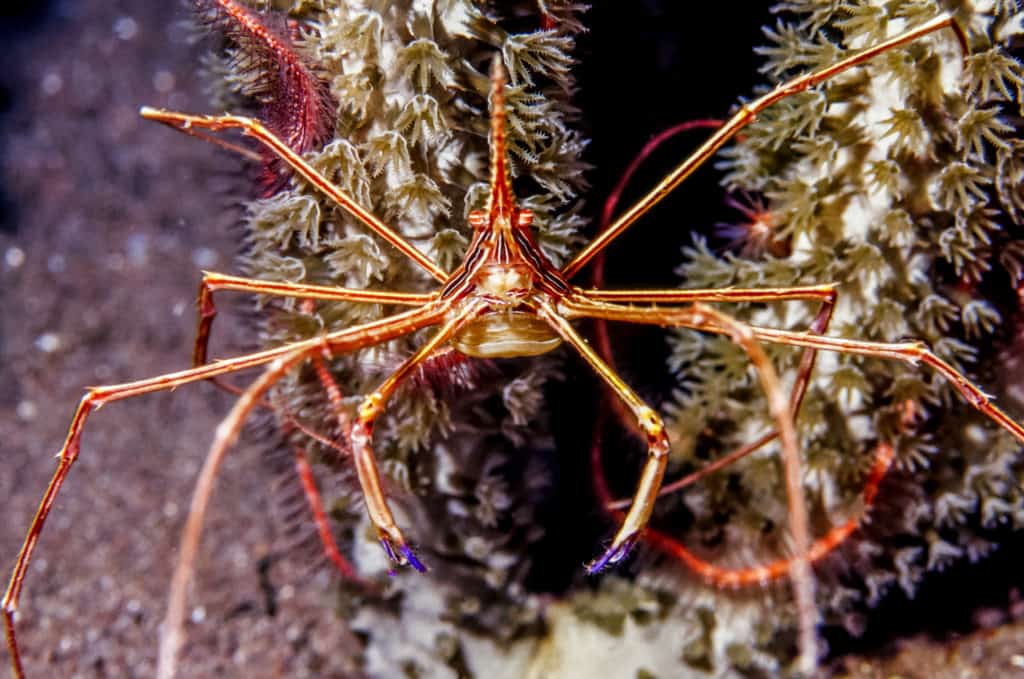 Marine fish and corals are undoubtedly beautiful, but if you’re looking for a creature that’s a little bit different from the run of the mill reef inhabitants that you find in most hobbyist’s aquariums, you might want to consider the Arrow crab.

Arrow crabs are weird to look at and exhibit fascinating behaviors that can keep the onlooker enthralled for hours! But would an Arrow crab make a suitable addition to your marine or reef tank?

In this guide, we introduce you to these wonders of the ocean, including a detailed guide on how to care for Arrow crabs and the pros and cons of adding one to your collection.

What is an Arrow crab?

Stenorhynchus seticornis is more commonly called the Arrow crab, Yellow Line Arrow crab, or Spider crab. These crabs have spindly long legs and an arrow-shaped body and head, which is what gives the crab its common name.

There are several different species of Arrow crabs, but Stenorhynchus seticornis is the most common. These crabs are found in the western regions of the Atlantic Ocean from Bermuda and North Carolina to Brazil and throughout the tropical waters of the Caribbean Sea.

These creatures inhabit coral reefs and are usually found living at depths from ten to 30 feet, hiding in tiny caves or crevices between the rocks by day and coming out at night to hunt. Arrow crabs are also known to live among the stinging tentacles of certain species of anemones as a means of sheltering from predators.

Arrow crabs vary in size from six inches right up to ten inches, with female specimens usually being considerably smaller than males.

Stenorhynchus seticornis has a triangular body, and the rostrum, or beak, is drawn out to a long point with serrated edges, almost like a unicorn’s horn. The creature’s eyes are set either side of the long snoutlike rostrum, giving the crab an almost comical, alien appearance. The crab’s legs are incredibly long and spindly, often measuring up to 3.9 inches across with the carapace of the creature being up to 2.4 inches in length.

The coloration of the crab’s body varies from golden to yellow or cream, adorned with white, black, brown, and iridescent blue lines. The legs are yellow or reddish in color, and the claws are violet or blue.

Arrow crabs move rapidly around their environment, scuttling across the rocks like spiders, making them very interesting and entertaining to watch. However, the species is very territorial and predatory in nature, which can be extremely useful if you have an infestation of bristle worms in your tank. Also, the Arrow crab keeps the reef environment tidy by eating discarded pieces of uneaten food and even scavenging on any dead organic material that they find on the substrate.

However, their behavior can be a problem in some tanks, as these long-lived, hardy invertebrates been known to attack some kinds of crustaceans, including the Banded Coral Shrimp, and these crabs will also try to predate on small, slow-moving fish. Also, like all crab species, Arrow crabs are very opportunistic feeders, picking at polyps and some species of soft corals while foraging for food.

Like most species of crustaceans, the Arrow crab sheds its exoskeleton periodically so that it can grow. Although that might be alarming for new hobbyists, the process of molting is perfectly normal.

When your crab has molted, you must leave the old shell in the aquarium so that the crab can ingest it. Through that process, the Arrow crab derives the minerals it needs to build a new exoskeleton.

Also, crabs harvest minerals from the water to help create a new exoskeleton, so dkh levels are very important.

You might also want to consider feeding your crab a calcium supplement to ensure good shell health and strength.

Care of the Arrow crab

Arrow crabs are pretty easy to care for, as long as they are provided with the correct saltwater environment and diet.

Seticornis can grow as large as six inches across the body, so you will need to provide a medium to a large size tank, preferably over 20 gallons. These crabs like to establish a territory, and that won’t be possible in a tank that’s too small.

Also, the more spacious the environment is, the less likely it is that the crabs will become aggressive.

Arrow crabs are happy with standard water conditions that are suitable for other tropical reef species.

Arrow crabs tend to be most active at night, emerging from their hiding places among the rocks to hunt and forage for food. So, you will need to provide a rocky habitat with lots of holes, crevices, overhangs, and fan corals for the crabs to hide in and shelter beneath.

Also, these crabs like to scuttle across the tank floor to scavenge and hunt, so providing them with some open space on the substrate is also a good idea. In nature, Arrow crabs often live within the tentacled safety of anemones, so including some in your reef community will help to make the crabs feel secure and at home in an aquarium setting.

In their natural environment, the Arrow crab is a predator, hunting among the nooks and crannies of their reef territory for small invertebrates, and various species of aquatic worms. The crabs will also take vulnerable fish that aren’t quick enough to get out of their way, and they also eat little crustaceans and certain coral polyps.

In captivity, seticornis are pretty easy to cater for in a reef tank. The crabs will eat any type of flake and pellet food, as well as meat, bristle worms, and any other detritus that falls down from above onto the aquarium substrate.

However, as well as being useful, tank-tidying scavengers, the Arrow crab is a hunter that will prey on small fish and crustaceans, as well as picking at living corals and polyps. That said, provided that you keep your crabs well-fed, they are unlikely to trouble other peaceful residents of the reef.

As previously mentioned, Arrow crabs can be aggressively territorial, so it’s better not to mix them with other crab species. It’s not a good idea to keep more than one Arrow crab unless you have a huge tank with plenty of space for the individuals to have their own territory. Keeping two or more of these creatures together is asking for trouble, as fights will often lead to injuries and even death.

Also, small, slow-moving fish can be viewed as food by seticornis, so if you have a tank that contains fish of that type, it may be better not to include this species of crab in your reef community. That said, the Arrow crab itself can also fall prey to large, aggressive species of fish, such as puffers and wrasse, so if you have those in your collection, Stenorhynchus seticornis might not be the best choice of crab for you.

Unfortunately, it is pretty much impossible to breed Stenorhynchus seticornis in a home aquarium due to the nature of the species’ natural spawning behavior and gestation. However, many of the specimens that are available for purchase in good fish stores are reared commercially, which is much more desirable than taking wild crabs from the natural environment. So, when buying one of these beautiful creatures, always ask if the specimen is wild-caught or commercially bred.

Stenorhynchus seticornis is generally widely available in good fish stores or online from reputable dealers. For that reason, these crabs can be purchased for a sensible price of around $15, plus shipping costs if applicable, making them very affordable for most hobbyists.

In this section of our guide to keeping the Arrow crab, we answer some of the questions that are most often asked by people who are thinking of adding one of these charming creatures to their reef tank.

A: It’s not uncommon for Arrow crabs to lose limbs or pincers. Often, that happens as part of the natural molting process, or can also be due to an injury sustained through fighting with another reef resident. Usually, the leg or pincer will regrow once the crab has molted.

A: Generally, Arrow crabs are reef safe. However, they are known to nibble on polyps and certain soft corals, as well as regarding small, slow-moving fish as food. Some other, smaller crustaceans and shrimp may also be predated on by the opportunistic crabs. In turn, the Arrow crab can be attacked by large, aggressive fish species, such as puffers.

A: Yes, under certain circumstances, Arrow crabs can be aggressive. In nature, the Arrow crab is a predator, hunting, and feeding on small crustaceans, aquatic worms, and slow-moving fish. Also, the species is highly territorial and should not be kept in company with others of their own kind unless in a very large tank that has plenty of space for individual territories to be established.

Q: How big do Arrow crabs get?

A: Most of an Arrow crab’s size is due to its long legs, which can be up to three times the size of the animal’s body. However, an Arrow crab can grow up to six inches in length in captivity. Generally, males are larger than females.

The Arrow crab is a peculiar-looking creature that can add a touch of the bizarre and unusual to a reef tank. If you have a marine aquarium that is not home to any aggressive species of fish or other potentially vulnerable crustaceans, such as shrimp, you might want to keep one of these fascinating crabs.

Bear in mind that you can only keep one Arrow crab, as they are very territorial, and if you have soft corals or polyps, they may be at risk of damage from Stenorhynchus seticornis.