Let’s Explore the Types of Oscar Fish Available To Buy! 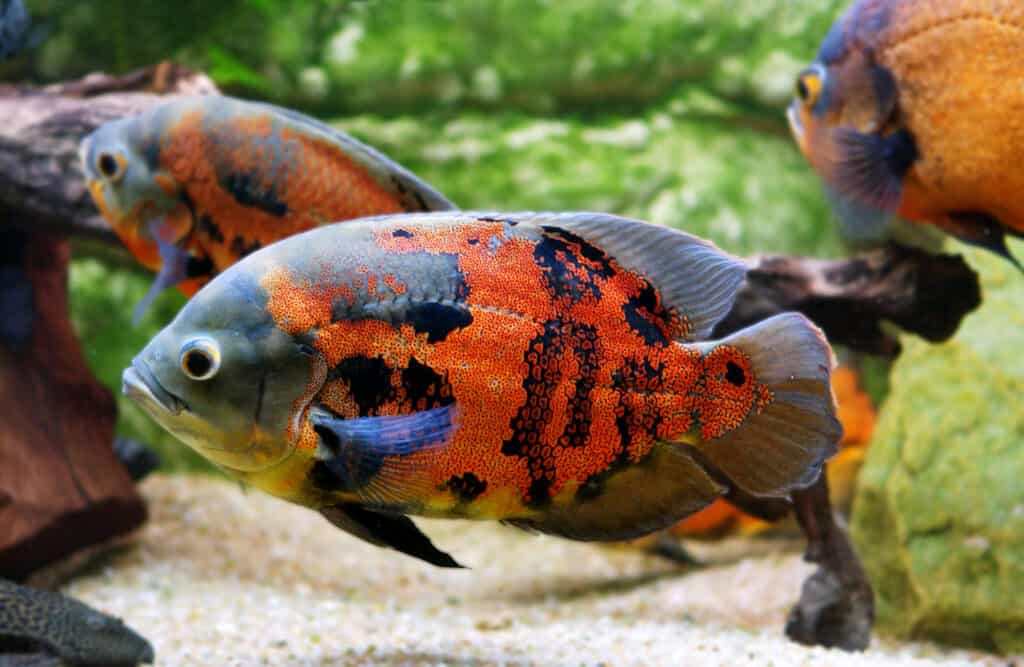 The oscar fish we are most familiar with is called Astronotus ocellatus, which means there is technically only one main type of oscar fish.

Within the species, however, there are countless variations. Some of the most popular include:

Tiger oscars or black tiger oscars are orange, black, and striped, like a tiger! They are the most common variety of oscar fish.

Some people refer to tiger oscars as marble cichlids or velvet cichlids due to their colors and patterns. Remember, oscars are part of the cichlid family.

Other members of the cichlid family include:

In the aquarium trade, oscars are some of the most popular fish in the cichlid family, especially because they have been bred for interesting colors and characteristics.

Albino oscars have similar coloring to tiger oscars, but they lack pigment.

They appear all white, and light orange stripes are the only coloration that shows up on their skin.

Albino oscars can be hard to find and typically cost a little more.

White oscars may also appear a solid white color with no stripes at all, especially the veiltail variety.

Veiltail oscars or longfin oscars are bred to have long, flowing tails. They come in a variety of colors, but their tails are always the same – long, delicate, and nearly translucent.

Red oscars are mostly red with black heads and bodies.

Instead of stripes, the colors appear in even, chunky blocks.

Blue oscars look more similar to tiger oscars, but they are blue with orange or yellow stripes.

They can also have an even blue color, like red oscars.

Yes. Blue oscars are real, but they can be hard to find.

Creating a blue oscar takes careful breeding, so you will need to find an expert fish breeder and be ready to pay big bucks for a blue oscar.

What Is a Blueberry Oscar?

Because blue oscars are so difficult to breed, some fish stores dye albino oscars blue. The resulting fish is called a blueberry oscar.

Dyeing albino fish blue is extremely cruel and can stunt your fish’s growth, ruin its immune system, and shorten its lifespan.

Only purchase blue oscars from trusted shops and breeders.

Green oscars tend to be an earthy color with bright green stripes.

In some green oscars, the color can be hard to spot, especially when the fish are underwater.

Lemon oscars are a solid and bright yellow color, like a lemon!

They are one of the most beautiful oscar varieties and usually cost a little bit more.

Black oscar fish tend to have lighter stripes than tiger oscars. Some don’t have stripes at all and are simply a pitch-black color!

Most oscar fish are bred for their vibrant colors and interesting tails, but Astronotus ocellatus (oscars) live all over tropical South America.

Wild oscars are typically tan or grey with light-colored stripes and unique patterns. Some have an “eye” on the back of their tails to ward off predators or unfriendly fish.

Outside of captivity, wild oscars also live among piranha.

Florida oscars are wild oscars that live in Florida.

Although they are descended from tiger oscars and have similar coloration, Florida oscars have created a self-sustaining community and have variations in size, color, and temperament.

Some people consider oscar fish an invasive species in Florida.

The fish that some aquarium enthusiasts call ‘fat oscars’ are not oscars at all. They are, however, the only other species of fish in the Astronotus genus, Astronotus crassipinnis.

So, How Many Types of Oscar Fish Are There?

There is only one species of oscar fish! Within that species, there are countless varieties, usually named for their coloration or characteristics.

Varieties of oscar fish can be mixed and matched by breeders, so in addition to the fish listed above, there are also black and white oscars, copper oscars, golden oscars, and many more.

Also, some oscars have traded captivity for the wild in Florida, and we never know what we might get from these wild variations!

How Much Do Oscar Fish Cost?

The price of an oscar fish depends on its size and color.

A small tiger oscar might cost $10 to $20, but if you want a full-grown albino variety, you might end up paying hundreds of dollars.

Fortunately, most varieties of oscar fish go for less than $60 — even those with interesting colors.

How Big Do Oscars Get?

When you purchase your oscar, it will likely be a juvenile fish about 1 to 3 inches long. Adult oscars can grow from 12 to 15 inches in length!

To give your fish the best environment to grow, give it plenty of space. Also, you should plan for your fish to get about 1 foot long!

Still, there have been records of oscars getting up to 16-inches long and weighing about three pounds. More space is always better for oscars.

What Colors Do Oscars Come In?

Due to all the cross-breeding, you can practically find an oscar in any color of the rainbow.

Not usually! Even if your oscars look rather different, they are all the same species and require the same – or similar – care.

This means that you could keep a lemon oscar and a tiger oscar in the same tank without any problems.

It also means you can breed your oscars to form new colors and rare varieties.

Can Two Oscar Fish Live Together?

Yes, two oscar fish can live together happily – just make sure they have enough space (2 oscars = 75 gallons of water).

Keep in mind that oscars prefer to live within their species, so it is always better to house your oscar with another oscar than another species of fish.

Variety doesn’t matter, so you can always have one veiltail oscar and one albino oscar – or even one red and one green.

Which Fish Can Live with Oscars?

Oscars are aggressive and will attack and/or eat smaller fish. If you want a tank mate from a different species, stay in the cichlid family.

Which Is the Best Oscar Fish?

The best oscar fish is whichever variety of oscar you like the best.

We’re most intrigued by the veiltail oscar and the lemon oscar, but you might be most interested in the blue oscar.

Tiger oscars will always be the cheapest and easiest fish to purchase, so if you’re on a budget, these amazing fish might be the best for you.

As long as your fish has not been dyed, no variety of oscar is better than the other.

How Do You Pick Oscar Fish?

Go to the pet store or make an appointment with a trusted oscar breeder.

Inspect the fish for signs of illness and make sure to choose an active fish with a healthy appetite.

Some people say the oscar fish will choose you.

Oscars are very loyal fish with their own personalities, and some people call them ‘river dogs’, or ‘aquarium puppies.’

Keep in mind: if you are looking for a specific color of oscar, you might have to purchase one online.

Make sure to read reviews to make sure you are buying from a breeder who treats their fish well.