Teacup Stingray Care Guide: Everything You Need To Know 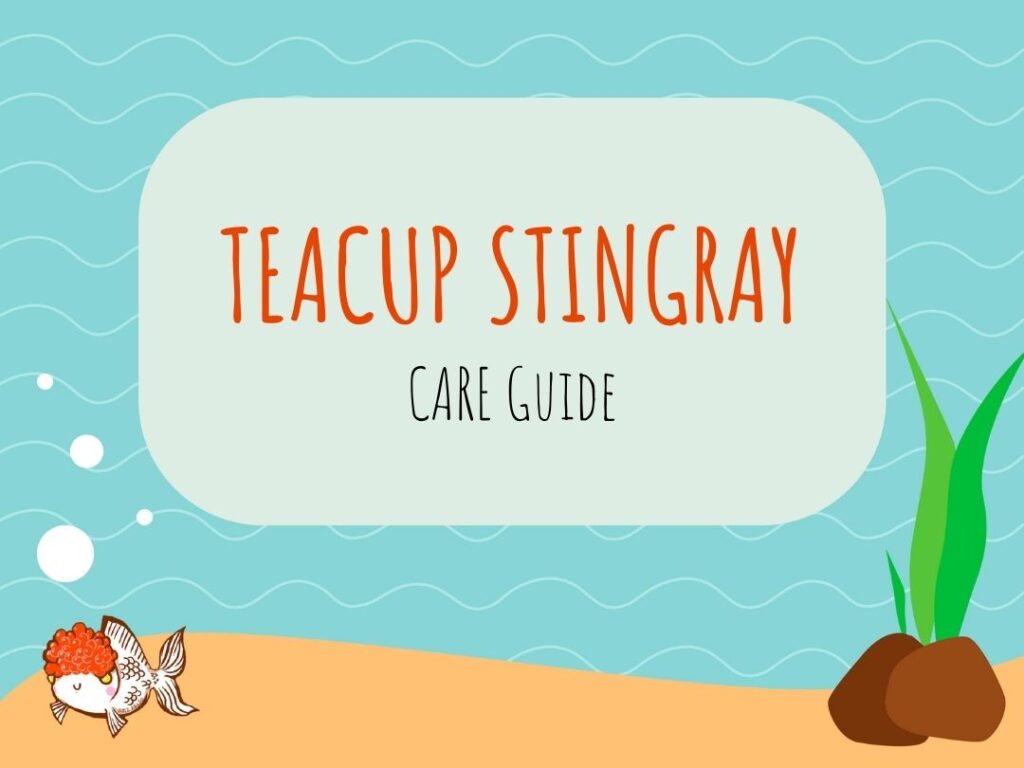 The Teacup Stingray is a bottom-dwelling freshwater fish that might be a good addition to your setup if you have experience keeping tropical fish.

Read this guide to learn how to care for these remarkable creatures.

What Is a Teacup Stingray?

Teacup Stingrays are also known as Reticulated, or Longtail Stingrays and have the scientific name Potamotrygonid laticeps.

These circular-shaped, bottom-dwelling freshwater fish are native to the tropical rivers of South America.

Freshwater stingrays are also popular with hobbyists and make an unusual community tank inhabitant. However, we recommend these intelligent fish to aquarists with experience, as this species can be challenging to care for.

Rays make such popular pets because they can become interactive with their owners, even learning how to take food from your hand!

In the past, most rays that were offered in the trade were wild-caught, however, in recent times, many species of stingrays have been captive-bred by commercial fish farms. This makes these magnificent animals more available, somewhat cheaper to buy, and healthier.

Teacup Stingrays live in slow-moving sandy-bottomed rivers. However, the fish also migrate into water-bound forest areas during the rainy season.

The Teacup Stingray is the smallest of the stingray family. The fish is disc-shaped, measuring up to 15 inches in diameter, plus a long, whip-like tail that can grow to the same length as the animal’s body. The body is olive-colored with darker net-like markings and a white underside.

The fish’s eyes are on the top of its body with the mouth and gills on the underside of the animal, facing the substrate. Special openings called spiracles are located just behind the animal’s eyes, and these are used for respiration.

All stingrays are related to sawfish, skates, and sharks, having cartilaginous skeletons instead of bones. As their name suggests, these fish carry a venomous spine on their tails. This barb is a modified scale and is used by the animal for defense rather than as a weapon. The barbs are shed periodically and replaced with new ones, so often, you’ll find discarded barbs lying on the substrate of your fish tank.

Stingrays also have ampullae of Lorenzini sited on their heads. These structures enable the rays to detect electrical impulses in the water around them.

How Long Do Teacup Stingrays Live?

The life expectancy of a wild freshwater stingray is not known.

However, you can expect your ray to survive for between five and ten years in captivity, provided that the animal is given a large tank, optimal clean water conditions, and a correct, well-balanced diet.

The Freshwater Stingray is a peaceful species, spending the vast majority of its time on the bottom of the tank.

The fish like to bury themselves in the substrate, leaving only their eyes and spiracles exposed. This strategy enables the fish to lay in wait for prey to come along, and leap out of the substrate, trapping the prey underneath its body.

Contrary to popular belief, stingrays don’t attack humans. There have been recorded incidents when people have died after being struck by a stingray barb. However, those cases mostly involved giant ocean-going species of rays, and the injuries were either accidental or defensive.

Most ray stings happen when the creatures are accidentally trodden on by people walking through shallow water. Of course, if you deliberately harass a stingray, you might be injured when the animal’s defense mechanism is triggered as it attempts to get away from you. So, the bottom line is not to touch your stingray unless you absolutely have to, and never tease or torment it!

What to Do if You Get Stung

Although Teacup stingrays are not aggressive animals, they can and do sting. For that reason, we recommend that you always wear gloves when carrying out tank maintenance tasks and keep handling your pet to a minimum.

If you do get stung by your ray, don’t panic! The venom is not fatal to humans, but a sting is excruciating.

If a fragment of the barb is still stuck in your skin, don’t attempt to remove it. Press a clean pad against the wound, soak the area in hot water, apply some disinfectant, and seek professional medical advice right away.

Here’s how to care for the Teacup Stingray.

Teacup Stingrays need to be housed in a large tank of not less than 125 gallons. The tank should be rectangular rather than tall to provide plenty of swimming space for the fish.

Although you can keep Teacup Stingrays in groups, you’ll need a huge tank to do so safely. These fish produce a vast amount of nitrogenous wastes, and they need plenty of swimming space, too.

The Teacup Stingray is a river-dweller, spending all of its life exploring the bottom of the water body in which it lives and foraging for food.

You should provide a thick, river sand substrate so that the stingrays can burrow down into the sand, mimicking their natural wild behavior. You can include some decorations in the aquarium in the form of twisted roots, driftwood, and smooth rocks. Large plants can also add to the overall look of the setup.

Natural decoration that replicates the fish’s natural habitat enhances the aquarium environment and can help the fish to acclimate without getting stressed. However, be sure to place any decor and plants at the sides and back of the tank so that the fish have plenty of swimming space. Also, everything you put into your stingray’s tank must have smooth edges and no rough surfaces that might injure the fish.

If you have internal heaters, you need to install a guard around them to prevent the rays from burning themselves. We recommend that heaters are either in-line or sited in a sump to prevent such injuries.

Stingrays are bottom-dwellers that live in an environment where the light levels are very low. Lighting should be subdued with a clearly defined 12-hour day/night cycle in the aquarium.

Teacup Stingrays are tropical fish that need a water temperature of between 76 and 82°F. These are freshwater fish that cannot tolerate brackish or saltwater conditions. The water conditions should be soft with a pH of 6.8 to 7.6.

Teacup Stingrays are a peaceful species that can be kept in a community setup, provided they have adequate tank space. However, it’s important to bear in mind that these fish will eat smaller fish that they can fit into their mouths. Also, male rays can become more belligerent during spawning, so be sure to provide the fish with enough space.

The most ideal tank mates for Teacup Stingrays are other stingray species. However, the Silver Dollar, Bichirs, Arowanas, Severums, and Geophagus species are all good options. Tankmates should be peaceful and not likely to nip the rays or steal their food.

Fish that inhabit the upper to middle areas of the water column are a good choice, as they won’t bother the bottom-dwelling rays.

Species to avoid include suckermouth catfish, such as Plecostomus, since these fish are known to suck on the rays’ soft bodies, causing injury and stress.

Teacup Stingrays are extremely sensitive to ammonia and nitrates, so you must maintain pristine water quality in your tank.

Also, these fish produce very high levels of ammonia relative to their size, so the larger the aquarium you can provide for these fish, the better.

To keep the water clean and healthy for the rays, you’ll need to carry out weekly water changes of up to 50%, as well as install an efficient biological filter system. Test the water quality every week using an aquarium water test kit to ensure that the nitrite and ammonia levels are zero and nitrates are below 10 ppm.

You might also find that RO/DI water with a trace element restorer works well for rays. However, don’t add salt to the tank unless you want it to boost the rays’ immune systems against diseases and stress or to mitigate high nitrate levels.

These animals can be picky eaters when they first arrive in their new home and death from starvation is not uncommon. However, once these freshwater rays have settled in, they can usually be tempted to start eating.

The rays can be fed on live blackworms, live earthworms, raw shrimp, and white fish in captivity, such as tilapia. Once the rays have acclimated to their new home, you can feed them on frozen foods, such as bloodworms, brine shrimps, and Mysis shrimp. Captive-bred rays will usually eat tablet foods, shrimp pellets, and sinking cichlid pellets.

As mentioned earlier, you can teach your stingray to take food from tweezers or even from your hand.

Feed your rays twice a day, offering only what they will eat in a few minutes. Remove uneaten food from the tank so that it doesn’t rot and pollute the water.

Since 2017, some regions in the US have prohibited private individuals from owning Teacup Stingrays.

So, if you live in one of the following states, you won’t be allowed to keep one of these creatures as a pet:

Residents of Florida and Colorado can apply for a permit to keep freshwater stingrays. So, before you buy one of these beautiful animals, double-check your local and state regulations.

When you go ray shopping, ensure that the animal has no obvious visible injuries and that the edges of the ray’s disc are not curled upward in the notorious “death curl.”

Ask the seller if you can see the ray eating, and don’t buy a specimen that isn’t interested in food. Steer clear of recently arrived rays. Ideally, you want the fish to have had a week or more to settle down before you take one home.

Before adding a new ray to your collection, keep the fish in quarantine for at least one month before you introduce it to your main display tank.

How Much Are Teacup Stingrays?

These fantastic fish do not come cheap! For healthy adult stingrays that are captive-bred, you can expect to pay up to $500 for one fish.

Can I Breed Teacup Stingrays at Home?

Some hobbyists have been successful in captive breeding Teacup Stingrays at home, but that’s time-consuming, and you need plenty of space to run a viable breeding program.

Female rays are much bigger than males and have two wombs, meaning they can produce litters of pups from two different male rays simultaneously. It’s thought that most species of freshwater stingrays are livebearers.

This beautiful stingray is expensive to buy, so we don’t recommend one for a complete beginner. However, if you’re an aquarist with plenty of experience in keeping challenging species and you have a generous budget, you might be interested in adding a Teacup Stingray to your collection.

These amazing creatures are peaceful bottom-dwellers that get along well with most other ray species and non-aggressive fish.

However, you need to feed the rays an exclusively carnivorous diet, and you’ll need a very large, well-maintained tank for these creatures to thrive.