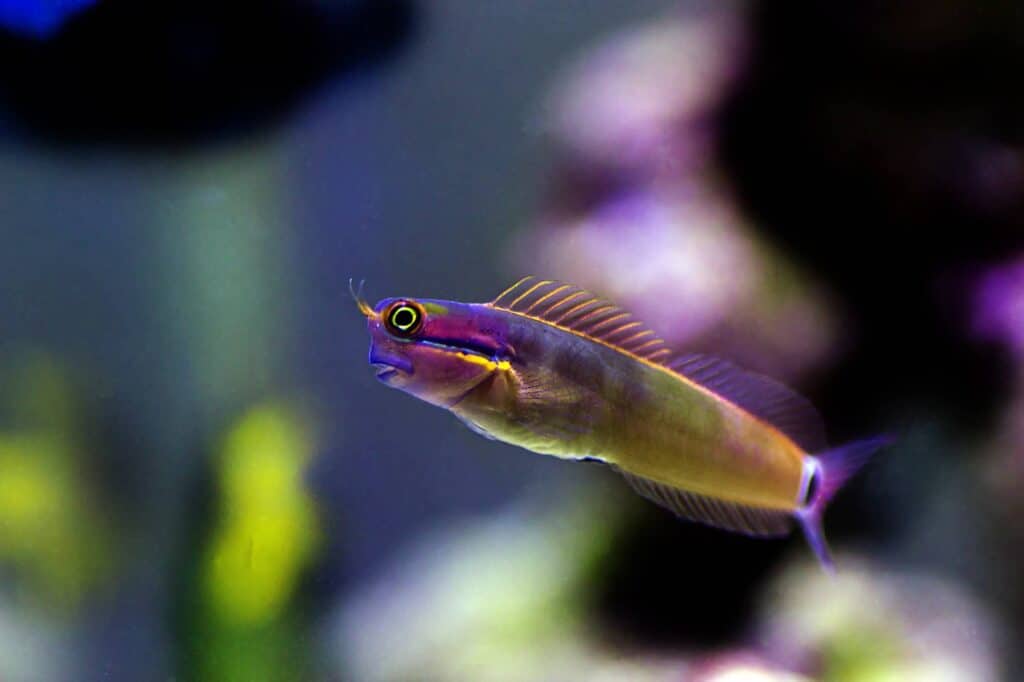 Are you looking for a colorful, active saltwater fish for the bottom of your tank? If so, you may consider adding a tailspot blenny to your aquarium. While this coppery-colored fish might be small, many enthusiasts consider it one of their favorite fish in an aquarium.

The tailspot blenny is an easy fish to care for, but it has a huge personality. They don’t require any extra marine care, but a stable environment and aquarium setup will help your blenny thrive.

Keep reading to find out everything you need to know about tailspot blennies and how to care for these charming fish in your own aquarium.

The tailspot blenny — named for the distinct, dark spot at the base of its tail —  is scientifically known as Ecsenius stigmatura.

As a blenny from the Blenniiformes order, these fish resemble gobyfish and share a number of similar characteristics. However, they’re entirely unrelated and behave in drastically different ways.

Like many other colorful fish available in the reef aquarium hobby, the tailspot blenny originates from the warm, coral reefs of Indonesia and the Philippines in the western Pacific Ocean.

There, they are found in sheltered lagoons and reefs, with loads of dwell rock for grazing and a sandy substrate that won’t scratch their underbellies.

They often forage in small groups around these shallow systems.

These bottom-dwelling fish are easy to identify as a blenny species. They have the typical thin, pencil-like body and muscular head the species is known for, and they use their small mouths to pick marine algae off rocks.

The tailspot blenny, in particular, has two antennae-like protrusions between its yellow eyes, under which are three, thin horizontal stripes: a black band, a yellow band, and an orange band. The rest of its head is a bright blue, which can vary in shade based on factors in the environment and lighting conditions, and its body has a base color of copper brown, splashed with red hues.

However, as its name implies, the blenny’s most characteristically identifiable feature is the small black spot outlined in white at the base of their caudal fin.

For the most part, these marine fish are easy to identify, thanks in part to their vibrant colors. However, they can sometimes be confused with the more expensive horseface, or redlip, blenny (Ophioblennius atlanticus).

Even at its maximum size, the tailspot blenny remains incredibly small, often only reaching about 2.5 inches (6.4 cm).

Blennies are especially popular in a nano aquarium or a tank size under 40 gallons (151.4 L). Generally, they don’t need more than a well-setup 10-gallon aquarium (37.9 L).

As previously mentioned, blennies are active fish and like to hang out at the front of the aquarium. Unlike other bottom-dwellers, however, blennies tend to spend most hours outside the burrows they build.

Still, they typically appreciate a sand substrate to burrow into while keeping their underbellies safe and prefer mature live rock for hiding, with sufficient algae buildup, but it’s not entirely necessary if their nutritional requirements are otherwise being met.

These blennies have a vegetable-heavy diet and rely heavily on the rockwork for algae and other microflora and fauna as their main food supply. It’s preferable to introduce them to an aquarium with plenty of vegetable matter, but if the tank hasn’t had time to grow a lot of algae, then you may need to add things such as supplements or algae wafers to ensure they’re getting everything they need.

It should also be noted that these fish are prone to jumping, so we highly recommend getting a fish tank with a tight-fitting lid.

The only issues you may have with keeping blennies are when you first introduce them to the tank as they can take some time to get used to new surroundings and might develop discoloration or stress lines.

If this happens, make sure to keep your fish fed as much as possible and watch for any signs of bullying. Within a few weeks, your blenny should start to feel right at home.

Not only are tailspot blennies hardy, but they’re also some of the most community-safe fish available, making them fantastic inhabitants for aquariums.

They can be kept with most other reef-compatible fish such as clownfish, angelfish, cardinals, and tangs.

It’s rare to get an aggressive blenny, although it has happened and the fish has had to be removed. Most likely, though, this is the result of limited space or resources.

Can you keep different species of blenny together?

The short answer is yes, a knowledgeable caretaker can keep different blenny species together. However, the setup needs to be just right.

In order to have success in keeping a tailspot blenny with other blennies or gobies, keep these requirements in mind:

1. Space. Though they are typically small and peaceful, blennies are dominant fish and establish sizeable territories that they will defend.

2. Food. Keep in mind that blennies and gobies heavily rely on the food that is naturally available in the tank, including copepods and algae. As we mentioned, a hungry blenny can become aggressive. A larger tank with a good amount of rockwork and coral polyps allows for a greater abundance of food.

3. Different-looking species. Tailspot blennies can be aggressive towards similar-looking fish. It is recommended to pair single blennies with fish that differ in size and shape — even better if you pick from a different genus of blenny entirely.

What makes these fish so popular?

Once you get your first tailspot blenny, you’ll understand! They are inquisitive, bold, and quirky. They’ll come to meet you at the front of the glass and scoot their way across the sand.

Most of their time will be spent picking at the rockwork, hunting for algae and small invertebrates to feed on.

While usually model citizens, some community fish aquarists have reported seeing rogue, aggressive tailspots in their tanks. Most often in cases like this, the blenny’s aggression comes from a feeling that it needs to defend itself, usually due to a lack of hiding spots.

If this happens, try adding more hiding places to the tank. If the aggression continues and there are no similar-looking fish in the tank, it’s possible you might just have a mean blenny.

The large majority of tailspot blennies are reef-safe. However, some are not.

Unfortunately, it is not unheard of for tailspot blennies to pick at SPS corals. We don’t know whether this is because they find algae growing on the coral or they have a taste for coral.

That being said, most hobbyists get an unproblematic blenny that never touches their coral.

If you find your tailspot starting to nip at corals, try to increase feedings. Tailspots usually need 2-3 small meals per day. If this still doesn’t work, then you may, unfortunately, need to think about rehoming the fish.

Tailspot blennies are largely herbivores but will accept meaty snacks, too. If you have a mature, established aquarium, they will mostly rely on the aquarium for food, eating algae and invertebrates off the surface of rocks.

However, you can also give them a variety of live, frozen, and freeze-dried food. This can include brine shrimp, Mysis shrimp, and bloodworms. You should also regularly off them good, high-quality marine flakes or pellets for a balanced and varied diet.

Yes, tailspot blennies will scour the aquarium in search of a bit of algae to eat, and they depend on it for part of their nutritional needs. However, this does not mean that they will completely clear out algae-filled aquariums.

Like other fish with algae diets, tailspot blennies can be part of the cleanup crew in your tank. They pick at the rocks and will clear up some pest algae such as green hair algae.

Keep in mind, these fish are incredibly small and can only eat so much — whatever they end up eating will also be put back into the system as waste.

The core of any aquarium’s algae issue is nutrients, lighting, or both. Until these problems are addressed, you won’t be able to fix the issue of algae growth.

Additionally, add herbivorous snails and crabs to help with the effort. In general, other types of blennies, like the lawnmower blenny (Salarias fasciatus), would be much more efficient at clearing up algae than a tailspot blenny.

Can you breed tailspot blennies?

While hard to do, tailspot blennies have been captive-bred. This is extremely uncommon though and many hobbyists don’t even attempt trying.

Like most species, tailspot blenny breeding requires a male and female. For the most part, though, there isn’t any way to tell the male and female apart. All successful pairings have come as a result of luck or pure trial and error.

Some hobbyists have documented males having filaments or streamers at the top and bottom of their tail fins, but these can be extremely difficult to see, if present at all.

If you are lucky enough to get a couple to pair, then you will want to create optimal breeding conditions in the tank. If at any point during this time you see signs of aggression, separate the fish or try to keep them in their respective territories.

Keep the water quality pristine and feed them plenty of live and frozen foods.

Tailspot blennies might be small, but they have huge personalities. These amazing fish can live in most saltwater aquariums and are friendly with other non-aggressive species.

This peaceful species is especially popular with nano reef tank keepers as they can quickly make their home in smaller setups.

If you have any questions about the tailspot blenny, other species of blenny, or if you have had luck breeding them in your home aquarium, don’t hesitate to leave a comment below!