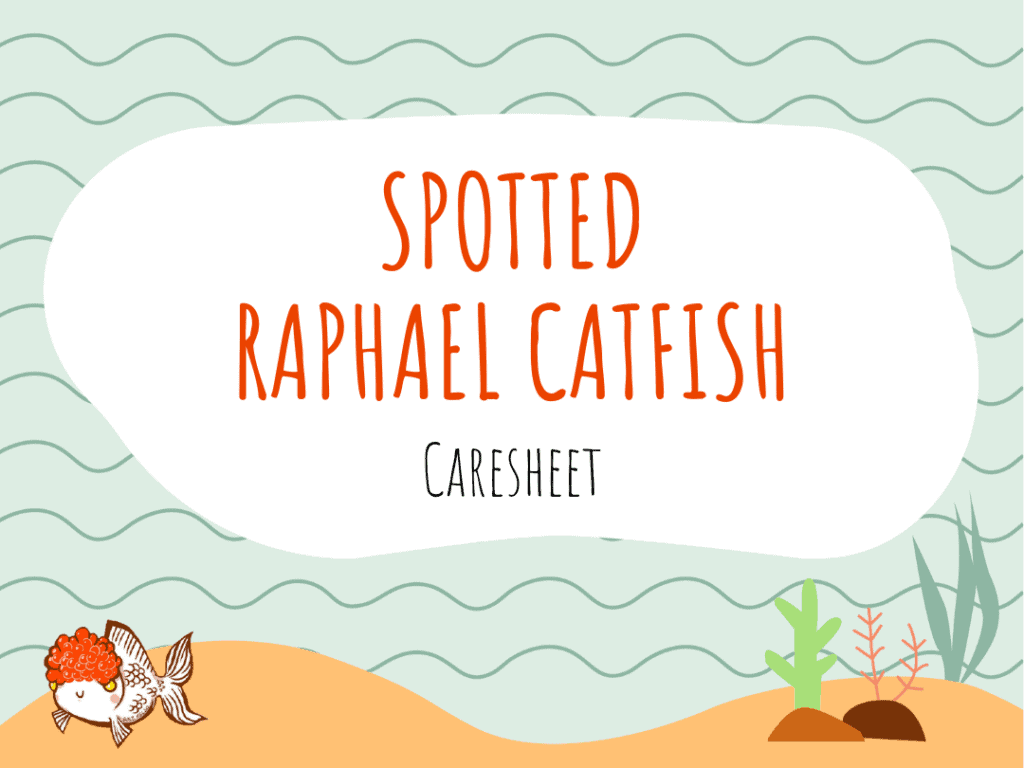 The Spotted Raphael Catfish is a beautiful, interesting fish that makes a great addition to any tropical tank. These hardy fish are easy to keep, too, making them the perfect choice for a beginner.

Read on to find out exactly how to look after and breed these charming fish.

What’s in a name?

The Spotted Raphael Catfish has the scientific name Agamyxis pectinifrons and is a member of the Doradidae family of fishes. It’s known by a few other names, including:

Whatever moniker you use, don’t confuse it with the Pimelodus Pictus, which is also often called the Spotted Catfish. So, if you’re buying online, double-check that you’re ordering the correct fish before you place your order.

Where do Spotted Talking Catfish come from?

The Agamyxis pectinifrons was first described in 1870 by Cope. The fish comes from the Amazon basin, specifically Brazil, Bolivia, Peru, and Colombia. Currently, it’s not listed on the UCN Red List of Endangered Species.

These catfish live in slow-moving rivers or still pools in the wild, burrowing into the soft, sandy substrate or hiding in tight spaces, such as hollows in driftwood or roots. The habitat is heavily vegetated, and the fish like to hang out amid the plants where they can be safe from predators.

During the rainy season, the catfish migrate into flooded forest areas where there’s plenty to eat. In the wild, Pimelodus feed on worms, crustaceans, a small amount of plant matter, and insects.

These aquatic animals are pretty sociable, schooling with their kind and other similar looking relatives.

These catfish are members of the Dorididae family of catfishes that are collectively known as thorny catfish. Catfish Agamyxis pectinifrons are tough-skinned with a nuchal shield situated in front of the fish’s dorsal fin, and they have bony lumps that form thorny scutes running along the fish’s lateral line.

Catfish in this family are also described as talking because they can create audible clicking or croaking sounds by rubbing their pectoral spines across grooves in the fish’s shoulder. It usually makes these noises when it is moved from its tank or otherwise stressed.

The first spine on the Thorny Catfish’s pectoral fins is extremely strong, and it can be used as an effective defensive weapon. When stressed, the thorny specimen extends the spines out sideways, so be extremely careful when handling the fish and carrying out general maintenance in the aquarium.

Netting these creatures can be tricky because of the spines, which can easily become entangled in your net. For that reason, we suggest that you use a rigid container to scoop up the fish if you need to move it. Handling it with your bare hands should be avoided at all costs if possible, as a prick from the spines is painful and could lead to infection.

Spotted Raphael Catfish have a cylindrical, arrow-shaped body and flat bellies. Female fish are generally more full-bodied than their male counterparts, and these fish have large heads and very small eyes. The catfish’s large mouth has three pairs of barbels — two pairs on the lower jaw and one pair on the upper jaw.

Once they reach adulthood, these catfish are up to 6 inches in length.

The fish’s body is typically dark brown or black to blackish-blue in color, having a pattern of small spots that can be white to pale yellow. The finnage is dark with stripes and spots, sometimes blending to create a crosswise barring pattern that’s unique to each individual. The fish’s belly is lighter with a similar pattern of random spots.

This particular catfish typically lives for up to 10 years, although there have been reports of some specimens living to be between 15 and 20 years old.

The spiny Agamyxis albomaculatus looks very similar to the Spotted Raphael Catfish, and it can be very difficult to distinguish between them when the fish are collected from their natural environment.

For that reason, you need to know where the fish were collected before you buy them. The Spotted Raphael comes from the Amazon Basin, specifically Brazil, Bolivia, Peru, and Colombia, whereas the Spiny Catfish is found only in the Río Orinoco drainage in Venezuela.

These fish are ideally suited for life in a beginner’s tank. They’re quite hardy, small, and easy to feed. Plus, as a bottom-dwelling scavenger, the Thorny Catfish can help clear uneaten food and plant matter from the substrate.

The fish are easy to please when it comes to water parameters, and they make good community members, as they’re peaceful and sociable. As these catfish don’t reach the huge size of many other catfish species, you won’t need to upsize your aquarium as the fish get older unless you want to add more to your collection.

The only downside to the Thorny Catfish is that it is, well, thorny! So, use extreme caution when transporting or moving the fish, using a plastic or glass container rather than a net, and never use your bare hands!

Spotted Raphael Catfish are very hardy creatures that can tolerate a range of water conditions. In the fishes’ natural environment, the shallow floodwaters in which they live can cool down markedly at night, so the catfish can tolerate very low temperatures for short periods, although rapid and extreme temperature changes should be avoided to prevent stressing the fish.

These catfish are pretty low maintenance, only needing a water change of 30 percent every month and an efficient filtration system.

This catfish needs a minimum tank size of 35 gallons, although larger is better. If you’re planning on keeping a group of these fishes, you should consider something that’s at least 45 gallons. As the Spotted Raphael is a bottom-dweller, a rectangular aquarium is better than a tall one so that the catfish have plenty of space to swim around and forage.

Like most catfish species, Thorny Catfish prefer well-oxygenated H2O, and they don’t like strong water movement, so an undergravel filter and powerhead work well for them.

These catfish prefer a dimly lit environment with lots of greenery, driftwood, and twisted roots that they can hide among. Juvenile fish like to hide away in thick vegetation, and fish of all ages enjoy wedging themselves into tight corners and burrowing. So, fill at least one corner of the tank with planting and use fine gravel or sand as your substrate to protect the fishes’ sensitive barbels.

The fish won’t bother with any kind of plant, so you can include some floating species to provide shade. That said, carpet plants don’t work very well with catfish, as the fish need to have access to the substrate for burrowing and foraging.

The Spotted Raphael Catfish is omnivorous, happily accepting a variety of foods, including high-quality sinking pellets, flakes, live food, frozen bloodworms, tubifex worms, and the like. In fact, these scavengers will clean up pretty much anything that lands on the bottom of the tank. Meaty protein is important in the catfishes’ diet, and you can feed them whole or chopped earthworms, too.

If you keep snails in your tank, it’s worth knowing that these catfish will eat mollusks and invertebrates that are small enough to fit into their mouths, which can be extremely helpful in controlling snail numbers but somewhat hazardous to shrimp and small crabs.

Ideally, you should feed these nocturnal catfish every day just before the aquarium lights are switched off at the end of the day.

Spotted Raphael Catfish are peaceful creatures that make a great addition to any community. But although these fish are not aggressive, it’s recommended that you don’t include very small creatures that could be viewed as a food source.

You can keep just one catfish, but they are a sociable species that prefer to exist in groups of four or more. To add variety to your setup, include a few similar looking catfish relatives. And, thanks to its armored, thorny protection, you can pair it with Central and South American cichlids and larger semi-aggressive companions, too.

It’s relatively easy to determine the sex of these catfish, as mature female specimens tend to be quite a lot plumper than males.

However, if you’re hoping to breed your fish, there is very little information available regarding the successful spawning of these fish in captivity, other than by commercial breeding operations where hormones are used. It’s thought that in the wild, the fish build bubble nests among floating plants. There are also reports of the fish building nests from leaf litter, debris, and scraps of wood. However, the fish usually just hide underneath the nests, and spawning has not been reported.

Spotted Raphael Catfishes are pretty hardy once they’re fully grown, although they can get the same tropical fish diseases as most other species, such as Ich, fungus, and various bacterial infections.

However, provided that their living space is well-maintained, these catfish rarely succumb to diseases. The primary cause of problems for them is an injury that’s sustained during transportation and netting. So, be very careful when moving or catching this fish.

If nitrate levels get too high, the catfish can suffer from infected barbels, making it very difficult for them to feed and navigate around the space. So, be sure to keep nitrate levels below 20 ppm by regularly carrying out partial water changes and monitoring its quality with a testing kit.

These are scale-less fish, so don’t use potassium permanganate or medications that contain copper. You can safely use formalin or malachite green at a rate of 1/2 to 1/4 of the usual dose.

To keep your fish healthy, always quarantine new specimens for at least two weeks before introducing them to your main tank.

Parasites and bacteria can get into the aquarium on plants, substrate, and decorations, so be sure to wash everything in a weak solution of bleach and water, then wash the items thoroughly in water from the tank, and then add them to your aquarium.

You can also quarantine plants for a week or so to make sure that they’re not carrying snail eggs, although the catfish will make short work of any snails that may be imported on the plant leaves.

The Spotted Raphael Catfish is readily available at most fish stores and online dealers and is reasonably priced.

If you want a peaceful, attractive community fish that will spend the majority of its time scavenging on the bottom of its glass home, look no further than the Spotted Talking Catfish.

Keep a small group of these hardy, resilient little catfish in a clean, well-maintained aquarium, and they will give you many years of hassle-free pleasure. But bear in mind that this catfish is primarily nocturnal, so you’ll need to fit a moonlight if you want to enjoy watching them explore their habitat after the main lights go out.