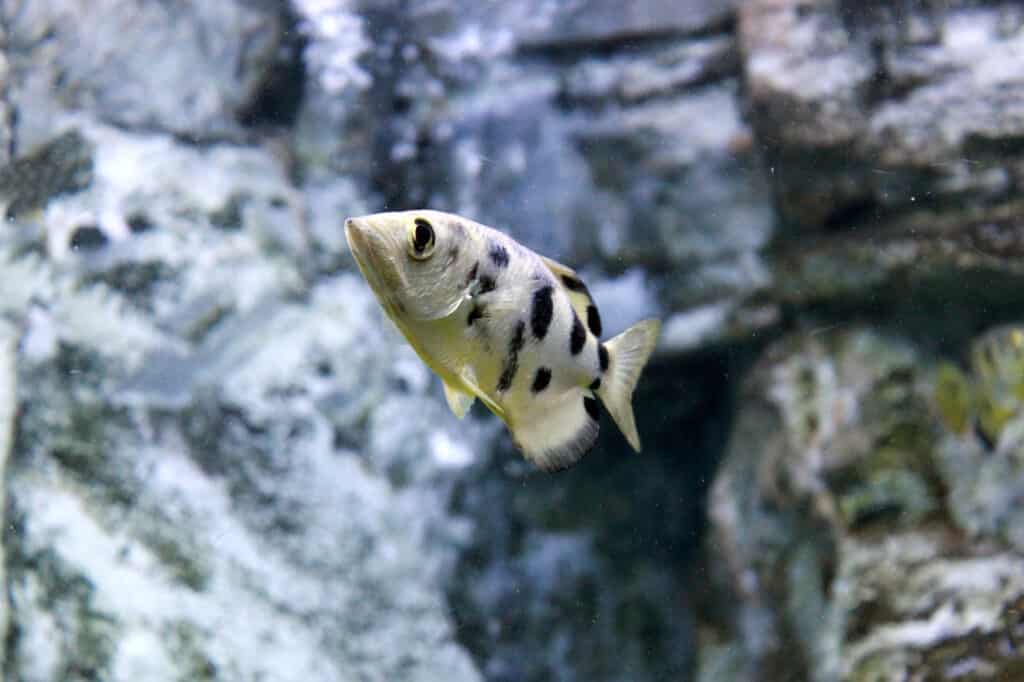 Is it your first time having an aquarium? If so, you may be wondering what the most intelligent aquarium fish is. After all, you want to have a pet that is not only a beautiful fish to look at but also one that is smart enough to figure out tricks and games.

There are a few different contenders for the title of most intelligent aquarium pet fish. One of them is the African cichlid. These fish are very smart and can figure out complex tasks. Another contender for the title is the betta fish. They are able to learn advanced fish tricks and are known for being very observant.

In this article, I will take you through some of the most intelligent aquarium fish so that you can make an informed decision about which one is right for you.

Oscars are intelligent, interactive fish that connect with their human owners. They are known as “water dogs” because they act with purpose and can recognize their owner’s faces and movements.

Also, these guys are fond of food and will eagerly await mealtime when they see their owner coming towards the tank.

Although people typically believe that oscar fish are aggressive with others, they are actually very playful and loving around humans. This shows how intelligent they are, as they can distinguish between different types of creatures.

Neon tetras are freshwater fish that get their name from their bright, iridescent blue coloring. They stand out among other freshwater fish and are often referred to as the ‘jewels of fishkeeping’ because of their beauty.

Not only are Neon tetras beautiful freshwater fish, but they are also intelligent. Like humans, tetras have developed a need for private space and can become territorial to protect it.

In the ocean they establish territories, but living in a community tank often doesn’t give them much room to move. In such close quarters, they define their own sheltered areas and chase away any fish who invade their space.

Although Neon tetras have a reputation for being aggressive, they are actually quite mild-tempered community fish. If you give them an adequate-sized tank, they will live peacefully with other fish.

Guppy fish are not only beautiful but easy to take care of, which is why they’re ideal for beginners in the aquarium world. By adding a few guppies to your home, you can transform your living space into a vibrant and playful oasis!

Not only can guppies survive in many different types of water conditions, but they are also one of the smartest fish you can keep as a pet. According to a study published in Current Biology, guppies have a rudimentary ability to count!

In this experiment, scientists from Uppsala University in Sweden wanted to see if there was a correlation between brain size and intelligence in guppies. They found that yes, large-brained females outperformed their male and smaller-brained female companions.

Aside from being smart, they also love socializing. They are peaceful tankmates that do best in groups and should live in sets of three guppies. If you have a larger tank, your guppies will also enjoy living with other fish that are similar in size.

Flowerhorn cichlids are large fish that grow to be approximately 10 inches long and have a lifespan of 12 years. Also, they received their name from the hump present on their head.

Despite their active digging habits, which can uproot plants in an aquarium with vegetation, Flowerhorn cichlids are still considered the ultimate pet Pisces.

In addition, these are highly interactive and remarkably intelligent fish that can recognize people around them and respond accordingly. Some even know to lift their humps out of the water to get petted – just like puppies!

Nonetheless, they can become quite aggressive with other tank mates if not having enough space. Usually, they feed on invertebrates and smaller fry but there are some reports of them attacking even larger fishes.

Although they might not be the biggest fish in the ocean, Manta rays have impressively large brains for their size. In fact, this is what makes them so smart. Scientists believe that these big-brained fish are self-aware and have developed areas in their brains dedicated to communication, problem-solving, and learning.

More than that, Manta rays have shown they’re ace swimmers and can travel noteworthy distances under the water with great navigation skills. They will go to dive teams that they know well, where they’ll be fed and can interact with humans.

In 2016, the University of Colorado ran an experiment that found they would react to their reflections in mirrors. Their behavior showed that they recognized the reflection as themselves and not another Manta ray. This demonstrates that these fish have a level of self-awareness that many other species lack.

In addition, these fish learned a new method five days quicker than rats. While rats needed 19 days, Galaxias fish learned the method in only 14 days.

The Elephant-nose fish has an extraordinary body-to-brain ratio in comparison to all other invertebrates. An impressive 60% of their body’s oxygen is utilized by their large brains.

Besides needing a good oxygen flow to their brain, these fish have a high concentration of brain matter in comparison to their body weight. Consequently, they are considered one of the smartest fish species.

Not only do they have a mild electric field, but they can also use it to detect prey, find food, and navigate in dark or murky waters to find a mate. This is done by using electrolocation and electroreceptors around their bodies which make Elephant-nose fish quite fascinating!

Contrary to popular belief, goldfish have excellent memories and can remember things for long time intervals such as weeks, months, or even years.

According to Culum Brown, an expert in fish cognitive ability at Macquarie University in Australia, science backs this up. Goldfish are used as ‘learning fishes’ often because they have such great memory spans and also have the ability to learn new tricks.

Unfortunately, goldfish are often kept in cramped bowls or aquariums where they don’t have the space or stimulation to show how intelligent they can be. They can even learn to repeat tasks that they were taught months, or even years ago, and can remember their owner’s faces after time has passed.

Research has repeatedly shown that fish can remember things for years. This is particularly true for Channel catfish, who can recognize the voice of the person who calls them for food even after not having heard the voice for five years!

This further demonstrates that fish have a good memory and are intelligent animals.

Fish have the ability to create mental maps, which help them remember locations and navigate their way around. The Crimson-spotted rainbow fish is an example of a species that can be taught to remember some skills.

For instance, this fish learned how to escape from being caught in a net by swimming through a hole in the center. And 11 months later, it could still recall exactly how to do it.

In other words, the Crimson-spotted rainbow fish was able to take what it had learned in the past and use that knowledge to escape an unpleasant situation.

The Archerfish is an intelligent fish that uses tools to help with its feeding. For example, they shoot jet streams of water at insects on plants in order to knock them down. They can even assess the size of their prey and adapt the force of their shots accordingly.

These fish intercept flying insects and guide them into the water, where they can easily eat them. Also, they have been known to be so accurate that they can shoot moving insects, rarely missing them.

Crowntail bettas are gorgeous freshwater fish ideal for any level of experience. They don’t need a large aquarium and only require a nano tank, making them perfect for small spaces.

Because they are incredibly curious, you should provide them with numerous tanks to explore. This will include plenty of plants, ornaments, and caves for your fish to hide and play in.

This curiosity is an indication of their intelligence. In the words of Dr. Tomas Chamorro-Premuzic:

“A (higher) curiosity quotient leads to higher levels of intellectual investment and knowledge acquisition over time.”

Although he was talking about business people at the time, these qualities are also apparent in betta fish and how they adjust to their surroundings. Their curiosity is what drives their intelligence, and is what allows them to learn even the most complicated fish tricks.

Do Fish Have Emotions?

Although fish don’t experience emotions as complexly or deeply as humans, they do feel and respond to things in their environment. This is why it’s important to provide them with the best possible care and to make sure that their living conditions are as stress-free as possible.

What Is the Most Intelligent Fish?

intelligence is not a one-size-fits-all quality, and different types of fish excel in different areas. Consider what attributes are most important to you or would work best in your aquarium when making your selection.

What Is the Average IQ of a Goldfish?

The common octopus has an IQ level between 30 and 40, which isn’t very high if you’re measuring by conventional standards.

For example, a freshwater salmon’s IQ can be as high as 130. Even so, this is just an average number that doesn’t give a definite answer.

What Is the Most Interactive Fish?

Goldfish, betta fish, and clownfish are all interactive and active fishes that enjoy being around people. They are known to be curious and can be trained to do tricks.

What Fish Recognize Their Owners?

Clownfish, goldfish, and betta fish are all species that have been known to recognize their owners. This is usually done by associating the owner’s face with food.