Signs Crayfish Are Dying – What You Should Look Out For 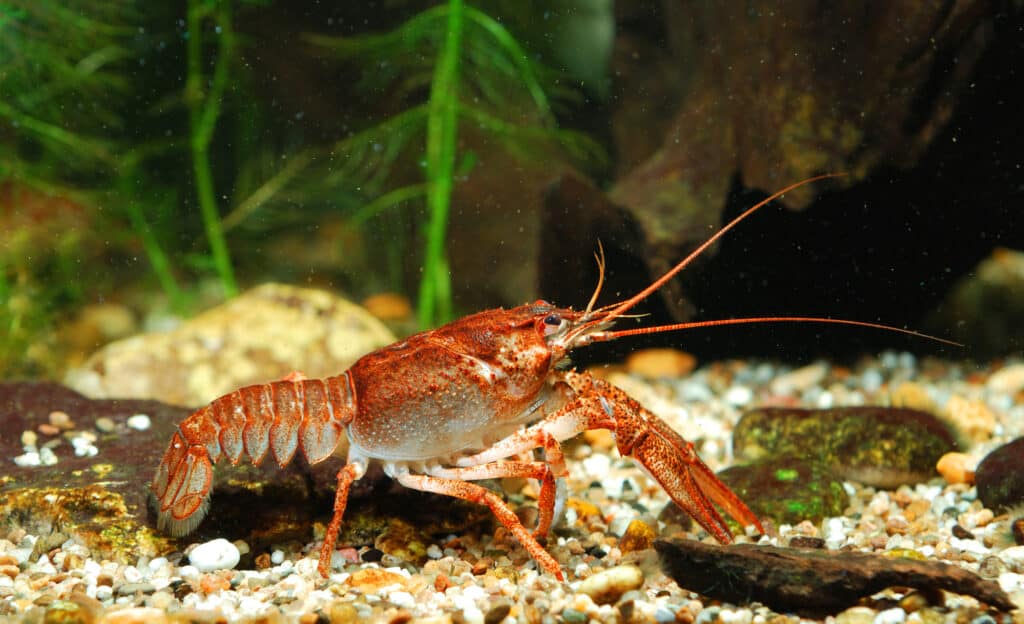 Crayfish can make excellent pets. These cute crustaceans are fascinating to watch, hardy, and easy to keep.

If conditions are correct, there’s no reason for your crayfish to die suddenly. Crayfish usually die because of unsuitable or poor water conditions, an uncycled tank, lack of oxygen, large, aggressive tank mates, and old age.

In this guide, we explain how to tell if your crayfish is dying or molting and why the two are sometimes confused.

Signs Your Crayfish is Dying

There are several clear signs that all is not well with your crayfish pet.

The Crayfish Don’t Move Much

A sure sign that your crayfish are sick and possibly dying is that the creatures stay in one place or barely move.

However, there are several reasons why your pet might behave in that way, and he might not necessarily be dying.

Crayfish typically become lethargic during molting. Your crayfish will most likely hide somewhere quiet and safe while molting. Once the molt has finished, the crayfish will emerge and become active again.

One of the leading causes of stress in crayfish is poor water quality.

Crayfish are quite sensitive to harmful substances such as ammonia and nitrates, and dirty crayfish tank water can potentially kill your pet. So, you must keep your tank and the water in clean, healthy condition.

To do that, you’ll need to run a well-maintained filter system and carry out regular partial water changes.

Crayfish are often the target of larger fishes that view crustaceans as a food source.

Aggression in any aquarium community is sure to cause stress levels to rise, and if your crayfish are constantly threatened or harassed by their tank mates, they could become sick and die.

When crayfish are sick and suffering from some kind of disease, they tend to remain in one spot.

Sickness weakens the crayfish, preventing them from behaving in their usual way. So, check your crayfish carefully for any signs of disease and take steps to treat your pet.

Sudden environmental fluctuations are a common reason for crayfish death because of the stress that causes.

Monitor the water conditions regularly in your crayfish tank to ensure they are within your pet’s preferred parameters and make any adjustments necessary.

The ideal water parameters for crayfish are shown in the table below.

A crayfish that won’t eat could be about to die.

Crayfish are usually pretty greedy critters, so why would your crayfish suddenly not want his food?

The molting process for crayfish can be pretty exhausting and stressful, and the creatures typically lose interest in food when they are about to molt.

So, if your pet stops eating, it could simply be that it is about to start molting.

Like all fish, crayfish have specific nutritional needs that you must meet to keep your pet healthy and thriving.

In the wild, crayfish feed on aquatic creatures, decaying vegetation, dead fish, plankton, and algae. In addition, crayfish may take tadpoles, frogs, shrimp, snails, worms, insects, larvae, and even their own offspring.

In captivity, you can feed your crayfish pretty much what you feed your fish. A proper crayfish diet could Include dried bloodworms, mosquito larvae, and krill, as well as dead shrimp or fish.

If your crayfish won’t eat, it could be that the food has spoiled and the fish don’t find it appetizing. Alternatively, your crayfish might be dying.

Overfeeding your pet crayfish can lead to digestive problems and can be one of the reasons for crayfish death.

Crayfish feed on algae as an important part of their diet. Algae need plenty of light to grow and proliferate. So, you’ll need to install an efficient lighting system in your crayfish tank.

Although crayfish are generally hardy, there are a few health conditions crayfish owners should be aware of.

Crayfish plague is a serious condition that is responsible for the death of crayfish across North America.

The disease is caused by a fungus that appears as white patches on the creature’s belly and limbs. Usually, crayfish shy away from very bright light, so they wouldn’t be seen hanging out in open water during the daytime, preferring to hide in caves or amid dense plants.

If the disease becomes terminal, the crayfish can fall over onto its side before eventually dying. Crayfish plague cannot be cured or treated.

However, you should disinfect your crayfish tank setup with sodium hypochlorite so that any new dwarf crayfish you introduce won’t fall victim to the disease.

Several parasites can attack crayfish, causing lethargy, a swollen abdomen, a voracious appetite, and a lack of interest in the animal’s environment.

Parasites can generally be treated by adding a broad-spectrum antiparasitic medication to your crayfish tank.

A common sign of stress in new crayfish is that they stop eating due to stress.

Be sure to provide your crayfish with plenty of hiding places and avoid introducing undesirable mates to the tank that might put your crayfish under stress.

Crayfish are usually pretty active creatures, so if your crayfish starts moving very slowly and appears lethargic, he might be reaching the end of his life.

That said, there are a few reasons why your crayfish might be swimming or moving around more slowly than usual.

Your crayfish’s activity level will be influenced by the quality of the food you offer him.

A poor diet can also cause severe physical problems for your pet, ultimately leading to digestive disorders that restrict your crayfish’s ability to move around.

Crayfish can become stressed, and that will have a big impact on how active they are. There are quite a few factors that will stress your crayfish, as mentioned above, including a lack of hiding spots in the tank.

Long-term, excessive stress can even be a cause of mortality in crayfish.

So, if you have a female crayfish that’s not as lively as usual, it could simply be that she is pregnant.

Experienced crayfish keepers know that overcrowding can reduce activity in their pets.

Crayfish are usually energetic, active little critters that need plenty of space in which to move around.

If your tank is chocka block with crayfish, your pets won’t have the room they need to grow and develop or the space to swim. That can cause your crayfish to become lethargic and not move around as much as they should.

Molting is a normal process for all crustaceans, including crayfish. The process can take a day or longer, during which time the crayfish are extremely vulnerable to predators and will hide away.

Molting can also be extremely stressful for old or highly stressed crayfish, and sometimes the creatures don’t survive the process. Molting takes a lot of energy, and often, many old crayfish aren’t strong enough to complete their molt successfully.

So, if your crayfish disappears for a few days during his molt, it could be that he’s died during the process.

How Do I Know if My Crayfish Is About to Molt?

When molting is imminent, your crayfish will become less active and might stop eating. During this preparatory period, the crayfish must ingest calcium into an internal organ rather than its exoskeleton.

Right before molting, the crayfish finds a hiding place. The creature moves onto its back and starts to fan its legs, swimmerets, and pincers to extract as much dissolved oxygen as possible from the water.

The crayfish’s carapace starts cracking behind the animal’s head, and the new appendages pierce the old shell. Once that stage is complete, the crayfish moves suddenly and violently to shake off its old shell.

Immediately after molting, the crayfish is highly vulnerable to attack by other crayfish and unsuitable tank mates, so the creature will remain in hiding for a short period while the new shell hardens.

Note that crayfish need to eat their old shell to replace the calcium that’s been lost during the molting process and to strengthen the new carapace.

So, leave the shell in the tank for a day or so following molting.

What Color Is a Molting Crayfish?

Immediately following molting, your crayfish might change from its usual drab brownish olive to a bright red or orange hue. Once the new shell hardens, the crayfish should return to its usual color.

Crayfish also change color to match their surroundings and in response to a change of diet.

There are a few reasons why your crayfish could die.

Crayfish can live for between three and eight years. So, if you have a crayfish that’s reaching the upper end of that life expectancy, he could die simply due to old age.

One common cause of mortality in crayfish is keeping them in inappropriate company.

The most suitable tank mates for dwarf crayfish include small, peaceful fish such as Mollies, Platies, tetras, barbs, danios, and the like.

Large fish will often try to make a meal of crayfish, leading to injuries and stress, which could ultimately kill your pet.

You must ensure that your tank is fully cycled before introducing crayfish. If your aquarium has not cycled, the water will contain high levels of ammonia and nitrites that will kill your pets within 24 hours.

As mentioned above, crayfish are pretty hardy creatures, but they can be vulnerable to some diseases, such as crayfish plague.

In some cases, diseases can kill your pet if you don’t recognize and treat the condition promptly.

Did you know that crayfish can drown? Well, that’s one of the most common reasons for crayfish death if there’s an issue with oxygen in their aquarium.

Crayfish need lots of dissolved oxygen in the water to survive. In the wild environment, crayfish can leave the water periodically to breathe atmospheric air through their gills. In fact, crayfish can happily survive out of water for several days.

It’s also a good idea to have a few large rocks that stick up above the water level, where your crayfish can go to breathe atmospheric air when they want to.

Here are the answers to a few commonly asked questions about the signs of crayfish death.

Q: When Crayfish Die, Do They Float?

A: Generally, a floating crayfish is molting rather than dead.

However, sometimes, dead crayfish do float. One sure way to tell if your crayfish is dead is to smell it. Yes, that sounds pretty gross, but dead crayfish stink, so you’ll be left with no doubt that the critter is deceased.

Q: Do Crayfish Turn Blue When They Die?

Once the creature’s new carapace has hardened, it will revert to its normal color.

Q: Can Crayfish Die While Molting?

A: Sometimes, crayfish die during the molting process. Death can be due to old age. Basically, old crayfish simply don’t have the energy it takes to successfully complete their molt.

Mortality sometimes occurs during molding when the creature’s shell is too hard or the crayfish can’t escape from its old shell for some reason.

Death occurs when the creature is trapped inside its old, too-tight shell, which basically crushes the crayfish to death. However, the death of crayfish through molting is quite rare.

I hope you enjoyed our guide on how to recognize the signs that your crayfish might be dying. If you did, please share the article with other readers!

Signs that your crayfish might be dying include a lack of activity, moving slowly, not eating, and problems molting.

So, ensure that your crayfish are fed correctly, enjoy the correct water parameters, and have access to plenty of oxygen in a clean tank to enjoy your pets for their full eight-year life expectancy!